So I’ve just recently finished what I’ll gingerly consider my first project on the x-carve and… well, really the first “thing” I’d actually be willing to show others! It started as a gift for my cousin who just recently moved away in addition to getting his PhD!

Here’s the best image I have of it: 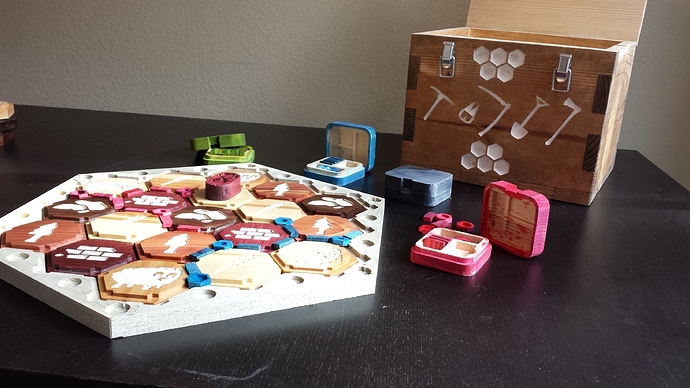 It’s not quite done in that picture. Here’s an imgur album of the entire process in case you’re interested: http://imgur.com/a/2gqUQ

I designed all the graphics in Inkscape - the functional cuts were usually around 4-5 mm into the wood, and the decorative cuts were usually between 1-2 mm and then filled with acrylic paint, then sanded off to get a sharp cut for wood/paint. I tried to design everything to have recognizable silhouettes with just the paint and the natural color of the wood. The graphics are here: catanfinal.zip (49.7 KB). They’re not 100% straightforward - for example, you’ll have to apply the resource icon onto the tile base in the cut, calculate the appropriate depths for the city and road container box cuts, and when it comes to the ports… well, good luck

. But please contact me if you’re having trouble figuring it out.

Suggestions for the Easel team -

That all being said, Easel is a fantastic program to use and create things with, and I can say 100% that this project wouldn’t have been possible without it. Thank you guys! I can’t wait to see what you do with it in the future.

Oh, also - thanks to the customer support team for getting a new spindle when mine crapped out halfway through this!

Let me know if you’ve got any questions!

Wow, that’s really fantastic. And it’s great that you did it all with Easel! Your designs are very good, perhaps some of the most complex that I’ve seen come from Easel. And the custom boxes to hold all the parts are amazing! If you find yourself doing more projects like this, you might investigate VCarve Desktop, at least until Easel catches up to it in terms of features. It’s a good fit for your 500mm machine, and it has a lot of the features you’re looking for.

One of the things that might interest you about VCarve is the ability to do inlays with a v-shaped bit. Probably not as fast as painting/sanding, but if you have the time, the inlays are so tight that they look painted on.

I love the striation in your dust collection, that’s great! What’s the game is paused in the background of your stacked pic, it looks familiar but I can’t place it…

(FWIW this is all coming from a fellow Catan aficionado, I’m lucky enough that my sister made this set for me: http://www.instructables.com/id/Custom-Laser-Cut-Catan-Board/ but it didn’t come with a sweet carrying case, I’ma have to get on her about that…)

Thanks! When I started this I didn’t think that I would need more mature tools… Now I think about how that may have saved a bit of time

I had so much sawdust, it’s crazy. That’s Fez in the background - I had been putting off playing it for a while but it became the perfect game to play while the next part was cutting.

Man… every time I look at one of those beautiful intricate boards I get a little insecure about the designs on mine… and I bet it doesn’t weigh a friggin’ 14 pounds to lug around! And from a single sheet of plywood no less!

That is incredible. Excellent work.

One question, what are the tools for? I have been playing SoC for years and never came accross the tools.

I think they match up with the resources: pick for ore, shears for sheep, scythe for wheat, shovel for brick(?), axe for wood.

Yep, that’s right! Just decoration for the outside of the box. Wanted to do something that kinda matched up with the theme but didn’t necessarily give it away.

As far as the shovel, well… I may not know how bricks are made… haha.

Heh, well, you can just say it’s a long-handled trowel

Just played this game last night for the first time and immediately started thinking about making it out of wood. The link for the photo album no longer works. Could you possible fix it so I can look at your design a bit better? Thanks

Just ordered an X carve. Does anyone have the files to share or purchase to use easel to make the settlers of catan game?

Hey Ronald - I included the svg files for the set in the post above (for free!). You can construct the pieces similar to the album by importing and then manipulating the images in inkscape. Hopefully that’s what you’re looking for!

That is simple amazing. Great work. I like the fact the pieces sit in grooves rather than on top. I love playing Catan but my kids always mess up the pieces…

Thanks so much. Can’t wait to try this