Anyone have any tips on v carving in cast acrylic? I’ve had… OK results, but not great. Mostly having issues with the chips melting back into the cuts, resulting in rough edges that require a lot of cleaning up.

I am using 3mm cast acrylic. I’ve had similar results with acrylic purchased from inventable’s store and what I sourced locally. I’m using Easel Pro, 30deg v bit, 635mm/min rate and 0.5mm cuts (recommended settings in easel). Max cut depth of 1.5mm. The design is such that there’s no rough cutting to be done - everything is done in a pass or two with the v bit. I’ve got the dewalt router and have tried it both at 1 and 3 speed settings (low-mid range).

I’ve tried using the 60deg v bits sold by inventables (which produced the worst results), and the 30deg and 60deg v bits sold by drillman1. I’ve tried using my dust shoe to keep things clean, I’ve tried using compressed air (literally standing over it blowing the chips out as they’re cut). I’m about to try spraying some oil on the acrylic and see if that will keep things cool enough, but of course then everything will stay in the cut due to the oil’s viscosity and I don’t have high hopes for it. The straight cuts I can polish up the edge after the fact, but for v carving that is not going to work (I can make it better, but I can never get all the junk out of the inside of the cuts).

What I want to do is do a v carve into the back side clear acrylic, then paint the inside of the cut, flip it over and mount it on the final project. But to have that look really good, I have to have clean cuts inside.

Here’s my best attempt so far. The dragon was carved in from the back and then painted. A black coat on the uncarved parts yields the contrasting black. It looks OK, but it is dull due to the junk still in the cuts. It lost most of the vibrance of the metallic paint and looks just kind of meh as a result. The eye is actually red, but that is almost completely lost in the crud and it looks like it has cataracts. If I could get those v cuts to be clean, the dragon would jump off the guitar. 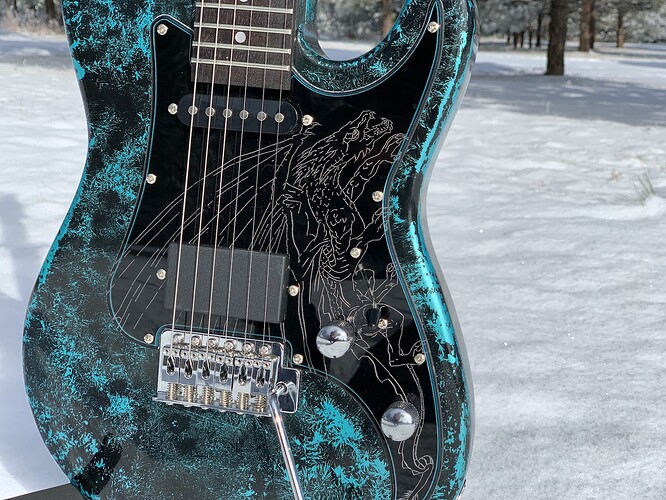 You have to feed faster. As fast as your machine can handle.

I’ll give it a try, thank you. My older 1m x carve with the gantry upgrade is already pretty wobbly though and the lines are already not smooth as a result. One of these days I’ll replace the z axis…