I did some searching through the forum and there appears to be a few people using Autodesk Fusion 360 to generate toolpaths. I’ve done it myself to do a bit of aluminum cutting at very slow speeds.

However, I’ve not yet solved the problem that the grbl post processor doesn’t raise Z for the first move, I have no idea how to work with machine coordinate system vs. work coordinate system and I’m having a hell of a time accurately positioning my bit to touch off of the part.

What I have been able to do:

There are a few “I’ve done it” hits on the web. I’ve even stumbled across a few video tutorials but they all seem to leave out this very important step of beginning the job. Once it’s going and referenced off of the right location, the F360 code works beautifully.

There’s a lot of potential here but the information I’ve found is incomplete at best.

Does anyone have anything more definitive that could be added to this thread to help us get a definitive Fusion 360 resource for X-Carve together?

I found this post processor that purportedly solves my initial Z-lift problem:
http://www.restrictedayerspace.net/cnc/autodesk-fusion-360-cam-post-processor-for-shapeoko/

could you just add the gcode to move z by hand?

Of course, but that would require editing every file produced, be error prone, and not really accomplish advancing the state of the art of using our machines with something that is not Easel. (I appreciate the work going into Easel but it’s really a toy compared to what what can be done with these machines)

oh i agree and I too am using Fusion 360… my xcarve is in boxes and i will begin the assembly this week. i’m interested in ensuring a fulfilling experience using the xcarve, ease, fusion360, f-engrave and the like.
my point was if its an easy one line at the top of a file that wouldn’t be horrible but to your point it could cause problems if not done properly.

I don’t have my machine yet (hopefully shipping next week), but I’ve been playing with F360 myself and I really like it so far. I’m following this to see what develops, and I’ll contribute as I can once my X-carve is up and running.

im using hsm pro and just zero the machine where i want, and then raise the bit to clear my clamps and run the g code, it jogs to the first cutting area and continues like normal.

here is a post processor i’m using to ensure the head of the tool rises .5in before the first travel

Can you just set your zero, raise the bit then send the file?

you CAN but this just does that tweak automatically for you.

@LeonGrossman I have had that same problem and has been easily fixed by going into the exported Gcode file after putting it through the GRBL and changing the z heigh on the first move to 15mm. 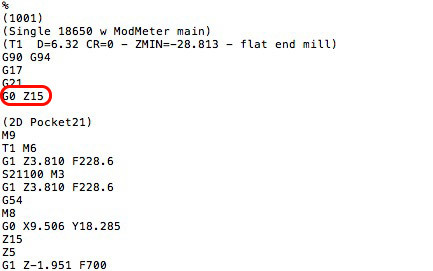 I used Fusion 360 to generate tool paths for several X-Carve jobs last weekend. The jobs finished faster than I’m use to and with very even cut-loading. Loving it, particularly for 3D milling aluminum.

I’m not having an issue with gouging at the start. I run with G28 support unchecked in F360. And I do jog the bit up to a safe height after setting zero and before hitting play in Chilipeppr.

I did that for a while, before I understood G28. Since I figured it out and set my G28.1 properly, I’ve used it incessantly. It’s amazingly handy. For instance, I just reset my G28.1 to the 0-0 of whatever fixture I’m using at the time, so I don’t have to re-zero my X and Y between startups, and can have them away from the far bottom-left corner.

I am definitely a fan of Fusion, it’s a darn good program.

Yep, g28 is super handy. But I like to control it myself. I just have it turned off in fusion 360 because I don’t fully understand what Fusion wants to do with it yet.

Basically, Fusion will go to that point exactly twice in each program (assuming you are using a single tool). It will go there immediately as the program starts, then immediately as the program ends, regardless of where your tool is before that point. As an example, I have it set for zero-zero on my fixture, so I don’t have to bother setting my X and Y zeros when I start up. I power up, home the system, zero out, then send G28 manually. It immediately goes to fixture zero-zero, and I zero it out again. Then I jog it X- and Y- about 30mm to change my tool with plenty of clearance, then jog it back to X20 Y20 and use the touch probe to zero my Z. Directly from the top of the probing cycle (16.958mm for my Z) I start my program. The first motion the Fusion code will perform is taking the spindle back to the G28 position, which is to say X0Y0Z(top of range), then start the spindle and move it in for the first cut.

At the end of the program, it will raise it to safety height, then take it back to G28 position and shut down the spindle (using the relay box on the X-controller, only difference would be that you manually turn spindle power on and off if you’re running stock with the DeWalt.)

I crashed a couple times before I understood G28, but since then I’ve had nothing but good luck with it. Being able to set zeros on my fixture instead of of having them locked at the lower left and having to manually re-set them each run has saved me about a million man-hours, give or take.

Neat. Thanks for the explanation.

I had been using G28 to save my part zero, to get it back if the GRBL ever gets reset mid-job. But I can do that with G30, and then use G28 as the safe point for Fusion 360 programs.

I do two sided parts quite often. Setting zero to a mid point scribed on the stock seems to minimize top-bottom registration errors. If not for that, I would zero to my fixture also…

Ah, definitely makes sense! And you can still use G28 for your part zero, no problem. Just set your zeros exactly where you want them, then jog your Z up some known amount before issuing G28.1. Then if there’s a shut-down for some reason, just re-home, issue G28 from the console, jog down the amount you jogged up from Z0 when you issued G28.1, and zero again. Boom, part zero right back where you want it, and as long as the G28.1 point is above the surface of your part, your beginning and ending motions will be gouge-and-crash free. There’s no reason at all that it has to be at the lower-left corner of the part.

A word of warning that caused one of my early crashes: The system doesn’t know or care about your clamps! It will go straight to G28 from whatever position the cutter is presently in, so make sure that those straight lines won’t intersect any of your hold-downs.