Think about just removing the new bits and going with easel bits?-

Something going on with my browser, picked one bit another showed up , but now i’m getting it to operate normally!

Hi Robert, with these new bits what “width” was entered into Easel?
The entered width effects the stepover amount, so even IF all other cut settings are identical IF the TIP width is entered instead of the MAX cutter width, then the toolpath generated will use a microscopic stepover amount for that bit. Where as all of the inventables Vbits are entered using the Max width of the cutter portion.

For instance these two bits are both 90deg, but would be entered into Easel as a width of 1/4" (Blue) and 1/2" (Red) which will actually effect the stepover. So IF a bit spec included a “tip diameter” and that was entered into Easel as the width it would make the stepover amounts even smaller yet. And this has a great impact when flat bottom pockets are present more than anything else. 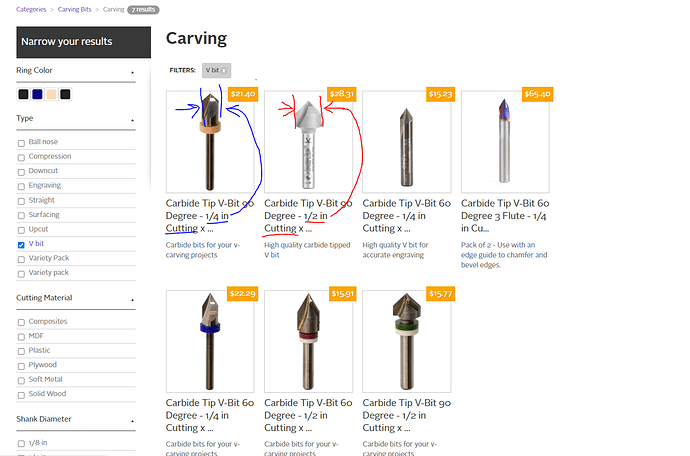 You are the man! I guess I got hung up entering ball nose bits and just kept entering the v-bits the same.
Thanks

I did bring this up in recent talks with easel developers that the way vbit stepovers are calculated is quite non-conventional when compaired to all other CAM software, so maybe they’ll look into changing either the verbiage or at least include a photo of what they are looking for to be entered in each data entry block like that, maybe a hover over a link and a little popout help with a photo, would be really cool for all of the settings.