I’m trying to create some picture frames out of oak, so I’m basically doing a lot of pocketing operations. I’m going to share what I’ve learned about cutting oak below (photos below!), and am looking for any advice on:

The first impact of the switch to the smaller bit was that the fuzzies went away. This leads me to my first question:

The second impact of the switch to the smaller bit was that, as I reduced the depth of pass, the fuzzies went away and by 0.02 I basically wouldn’t need to do any sanding. But, the inside corners aren’t even (see 2nd photo). I am trying to create a 0.125" radius using a 0.125" diameter bit. This leads me to my second question: 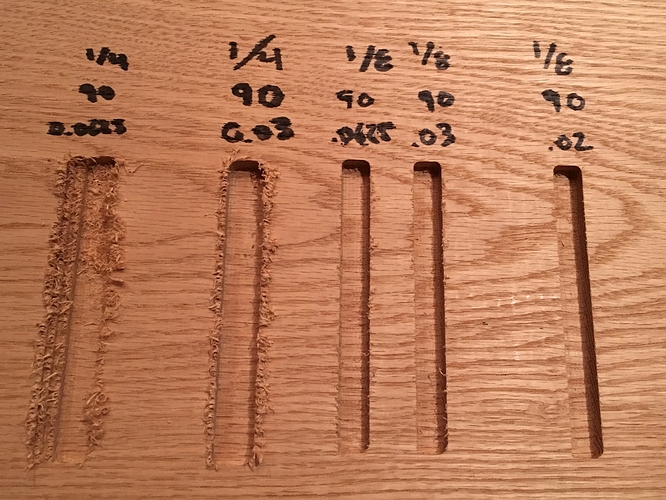 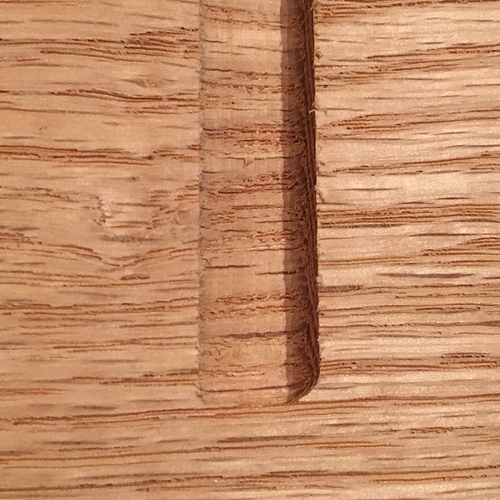 Just for my own edification, were those slots done with upcut or downcut bits? I’ve been made to believe that if I was using downcut bits I wouldn’t see torn up material (fuzzies) on the top surface like that.

Upcut bits. Here are the ones I’ve used:

What type of oak? It looks like red, if you want oak, can you use white oak? It is more friendly to high speed bits. I haven’t used oak yet on my x-carve, so other than that I’ll listen to what others say.

As for the uneveness, I wonder if the you are using an upcut bit and easel thinks a downcut? Perhaps easel has the wrong one and it causes it to not be able to carve well and the bit bends?

Any idea how to tell Easel the correct bit?