Well, I had another busy weekend of X-Carving and anodizing.

First, the results (I know thats what everyone wants to see): 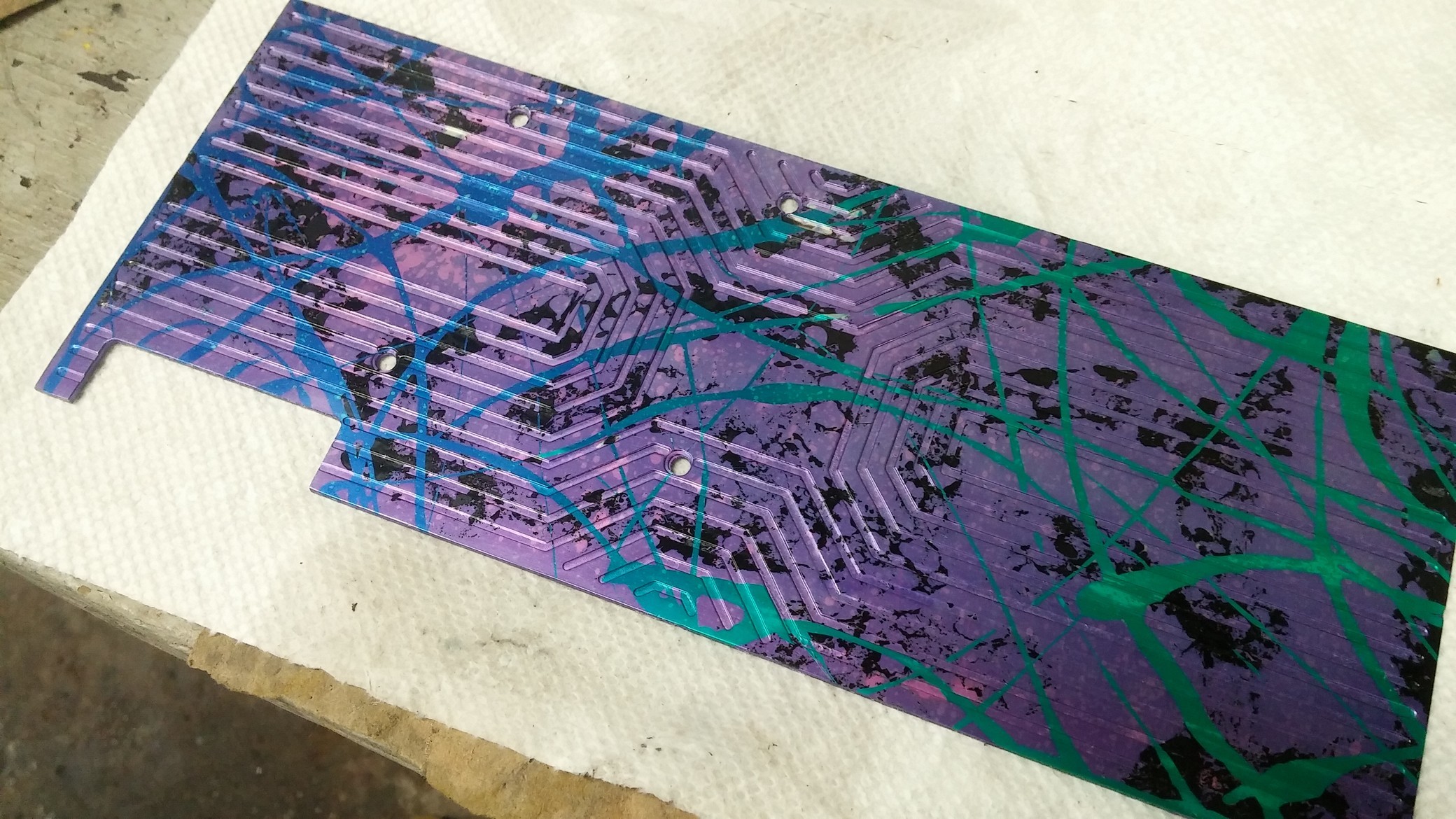 An old hobby of mine was building and customizing my gaming computer. I haven’t really done much to it though since I built it in 2012/2013 and I thought it was time to spice things up. After all, I have an X-Carve which means I can make a lot of really cool custom computer related stuff. So, graphics card back plates, what are they? All it is is a plate (typically aluminum) that is attached to the back side of a graphics card, purely to improve aesthetics. For those that know computers, my graphics card is a Zotac GTX 670 4GB.

Heres a pic of the back 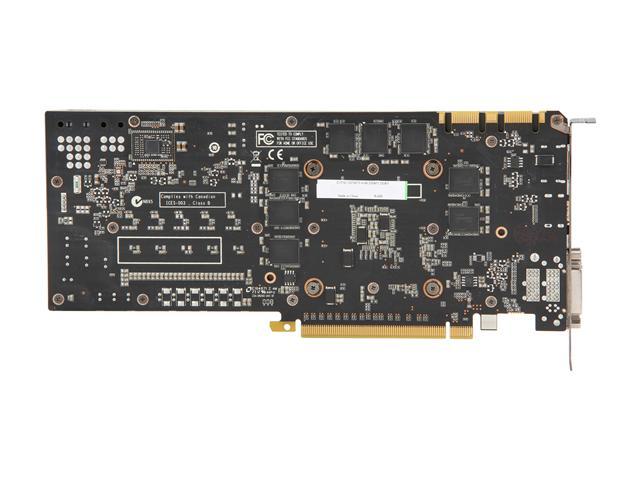 Ugly, huh? Yeah if you have a window on the side of your computer case its not very pretty.

So, onto my design. 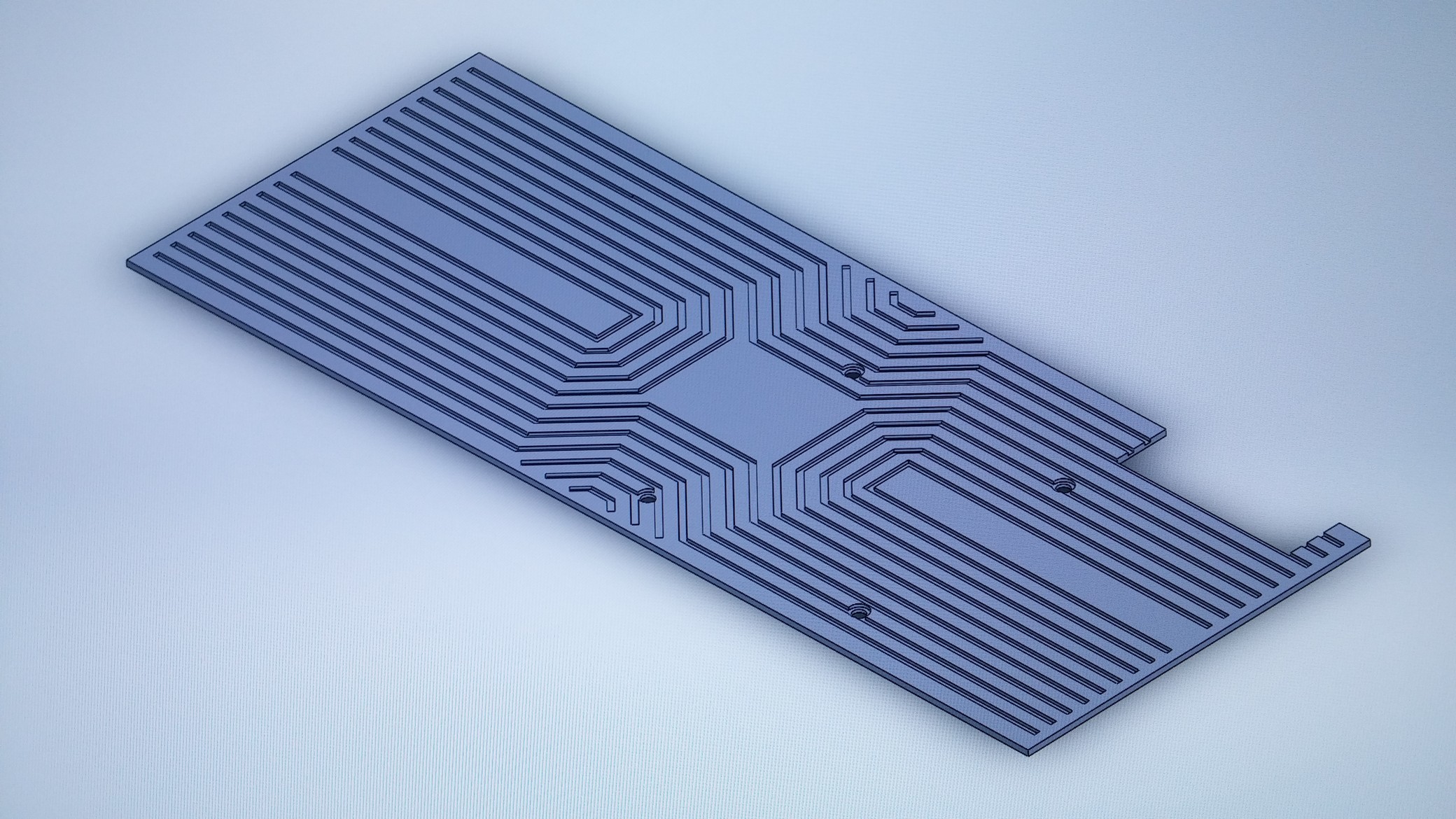 I used 1/16" thick aluminum, I probably should use something a bit thinner, but I was worried it would deform itself too much when cutting. This took about an hour to cut, 56ish minutes on the 1/16" bit to cut all the grooves, then I changed out to the 1/8" bit to cut the through holes and outline, about 3 or 4 minutes.

Fresh off the mill (don’t worry about the markings): 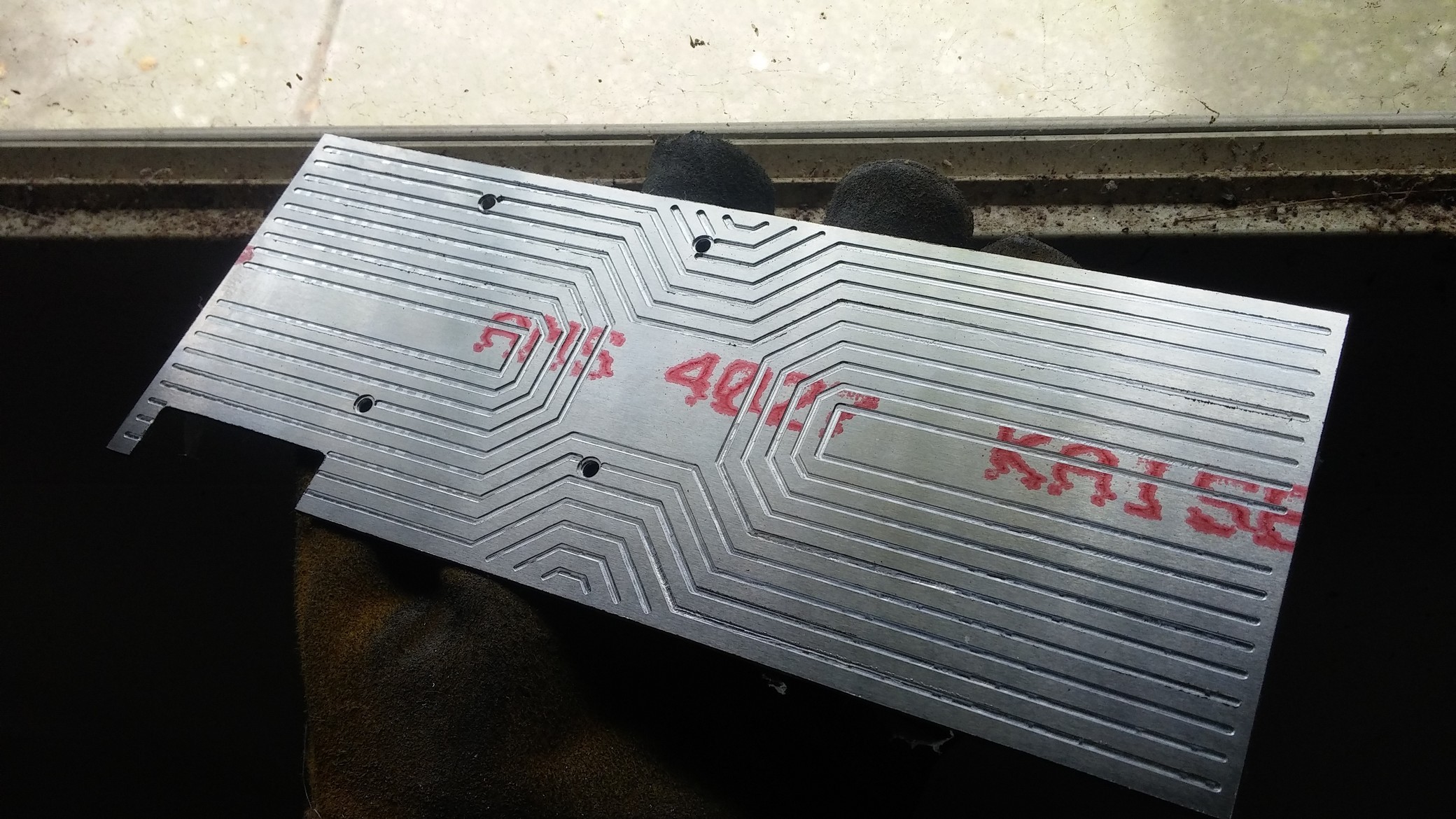 Next it was time to clean up the surface, and make it all even/flat. For that I screwed the plate to a board I had laying around and ran it on my Satin finish buffing wheel: 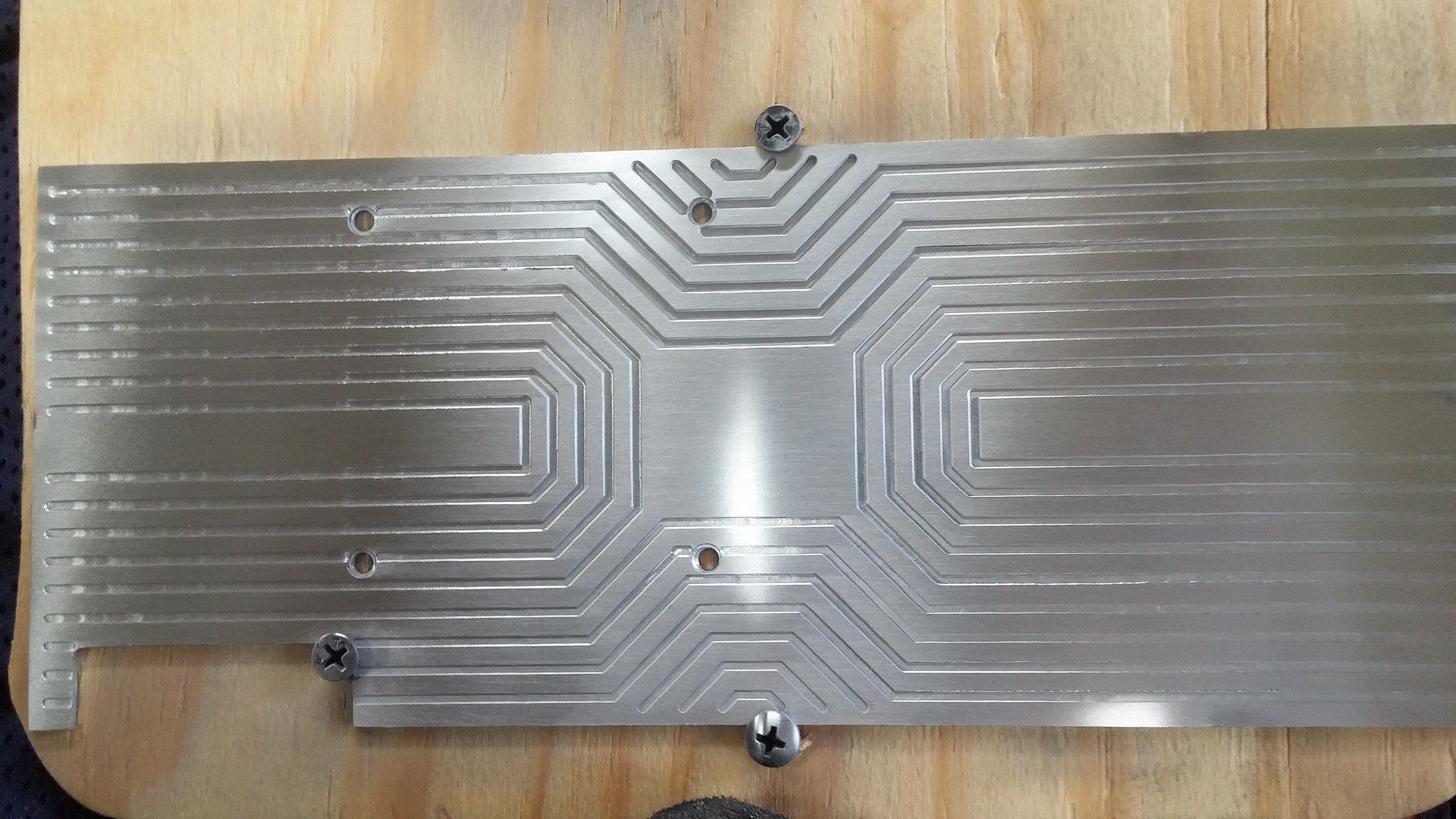 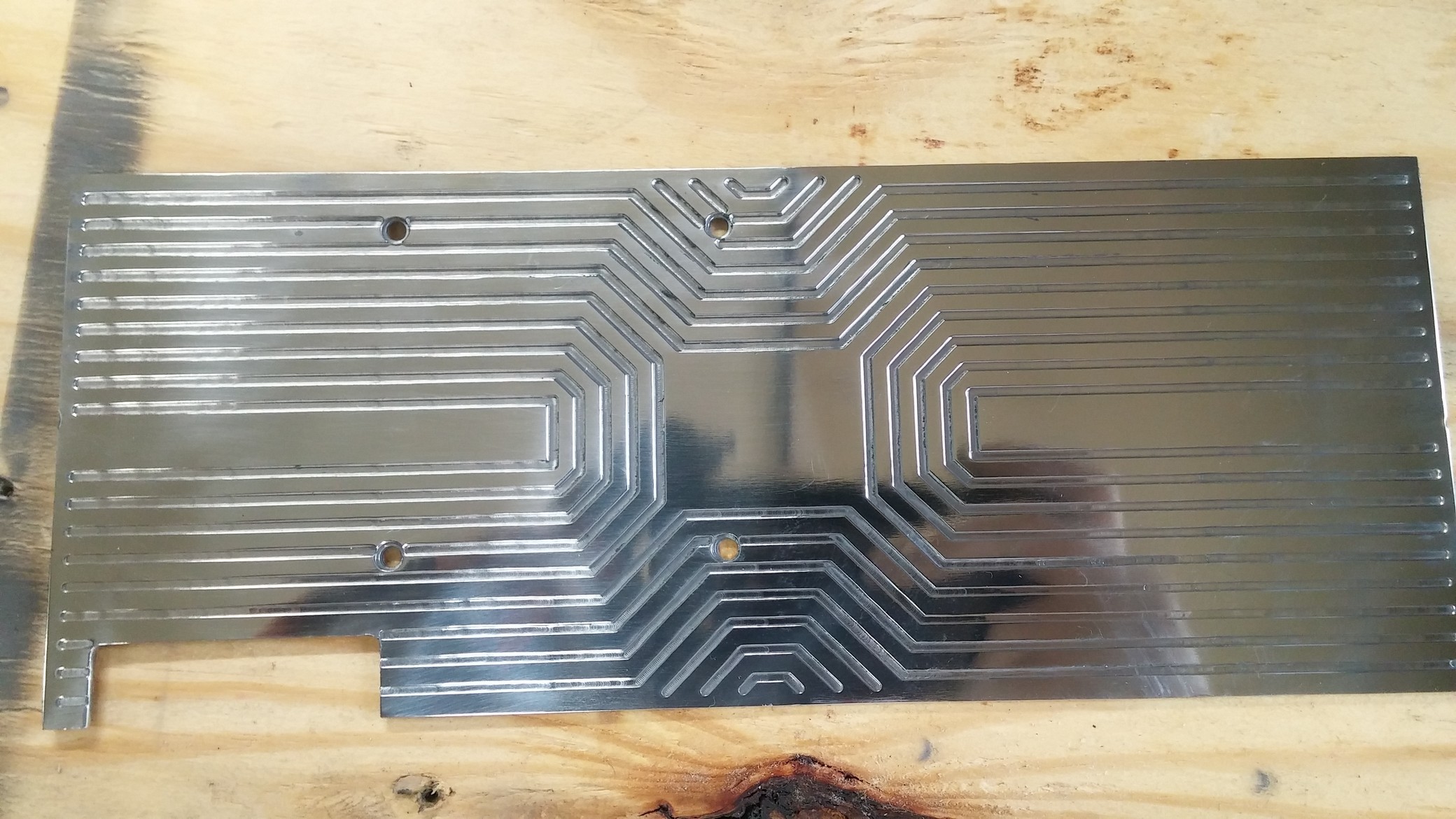 Now its time to anodize this sucka. Into the de-greaser it goes! 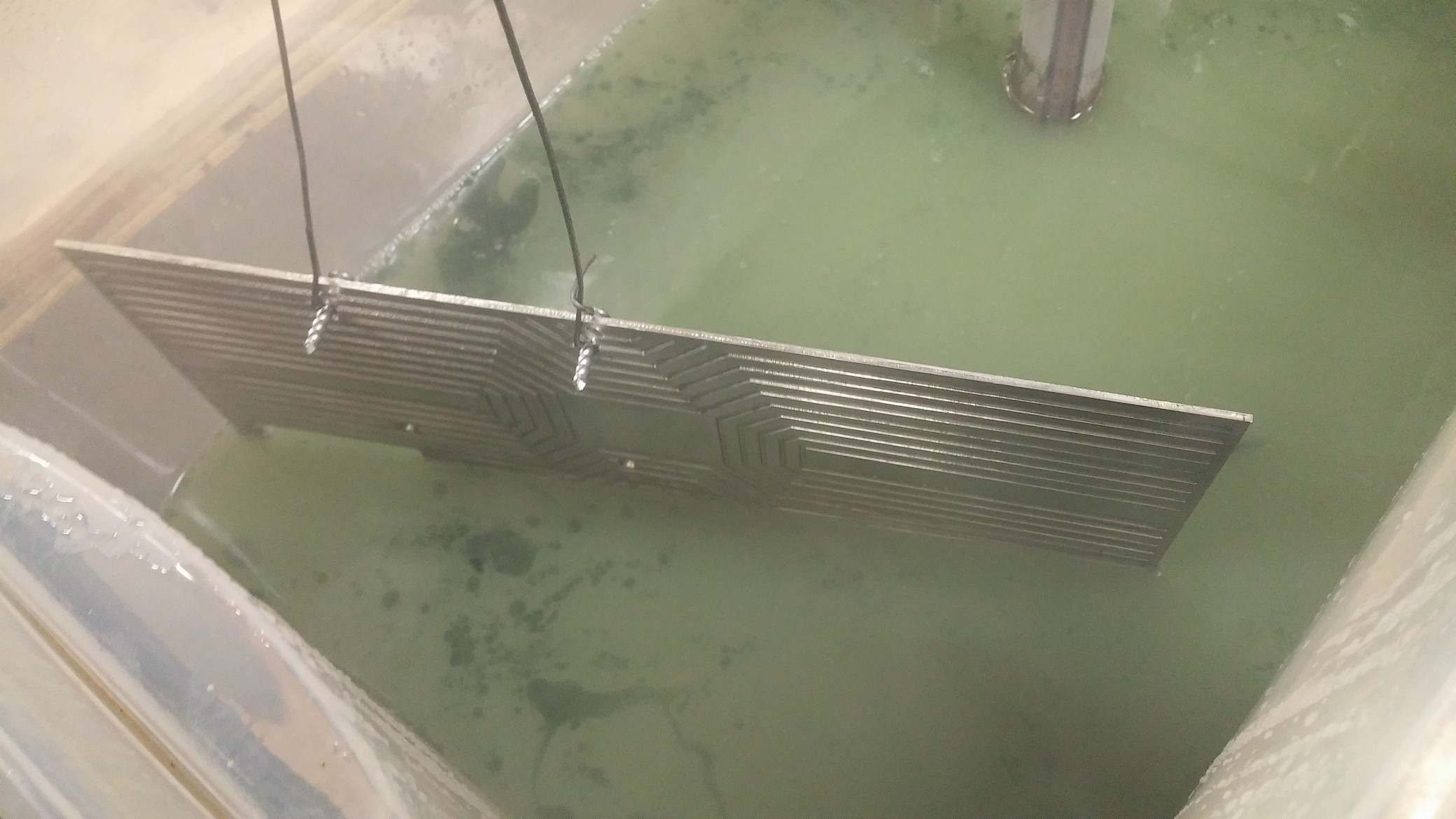 Covered in black grime, its time to de-smut it and make it clean again: 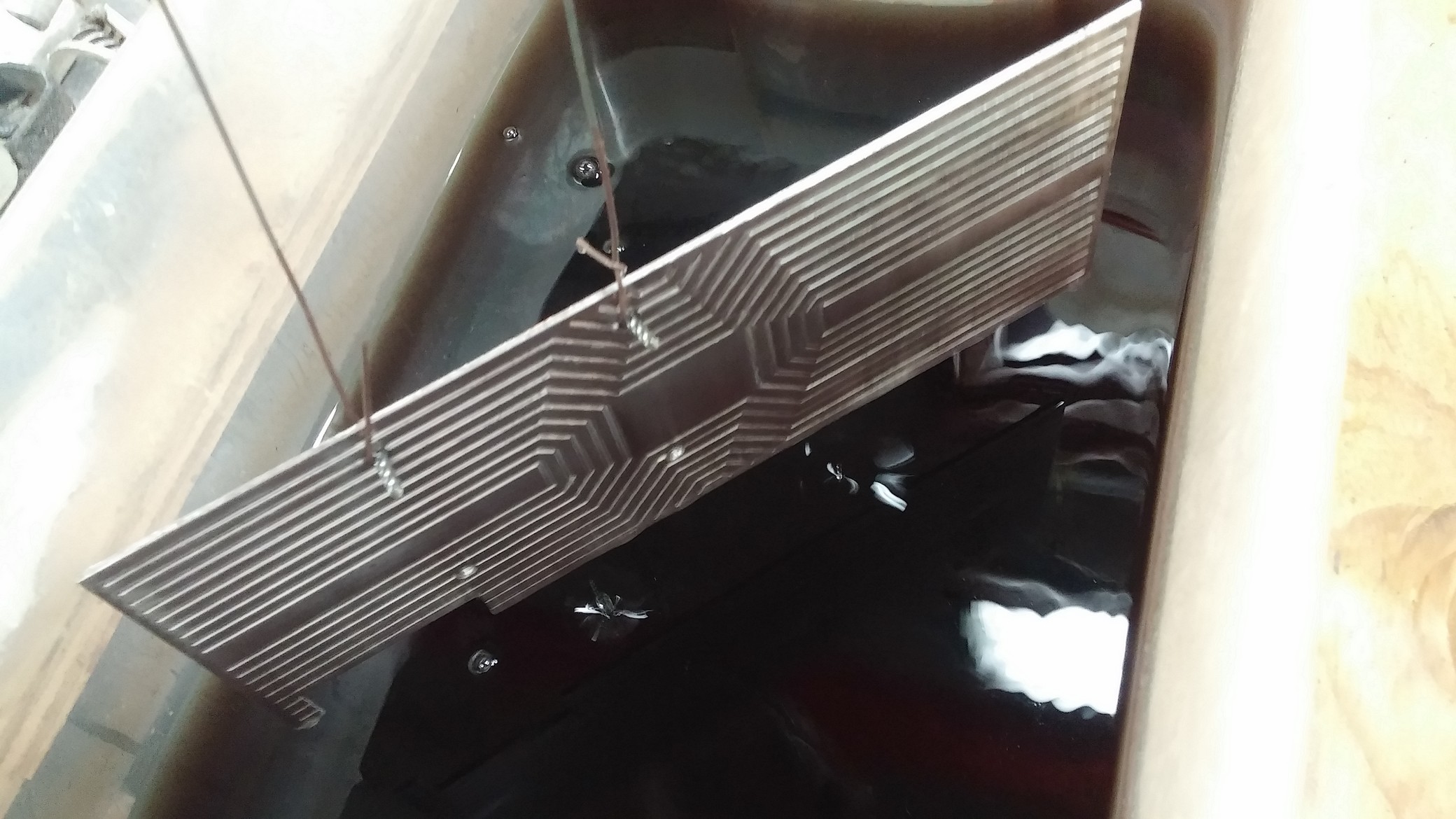 There she is, in the bath, with a few other parts. Very light run this time. Usually there’s another rack in there and all would be completely filled. Any metal in the sulfuric acid is either titanium, lead, or aluminum. Anything else and it “poisons” the solution. 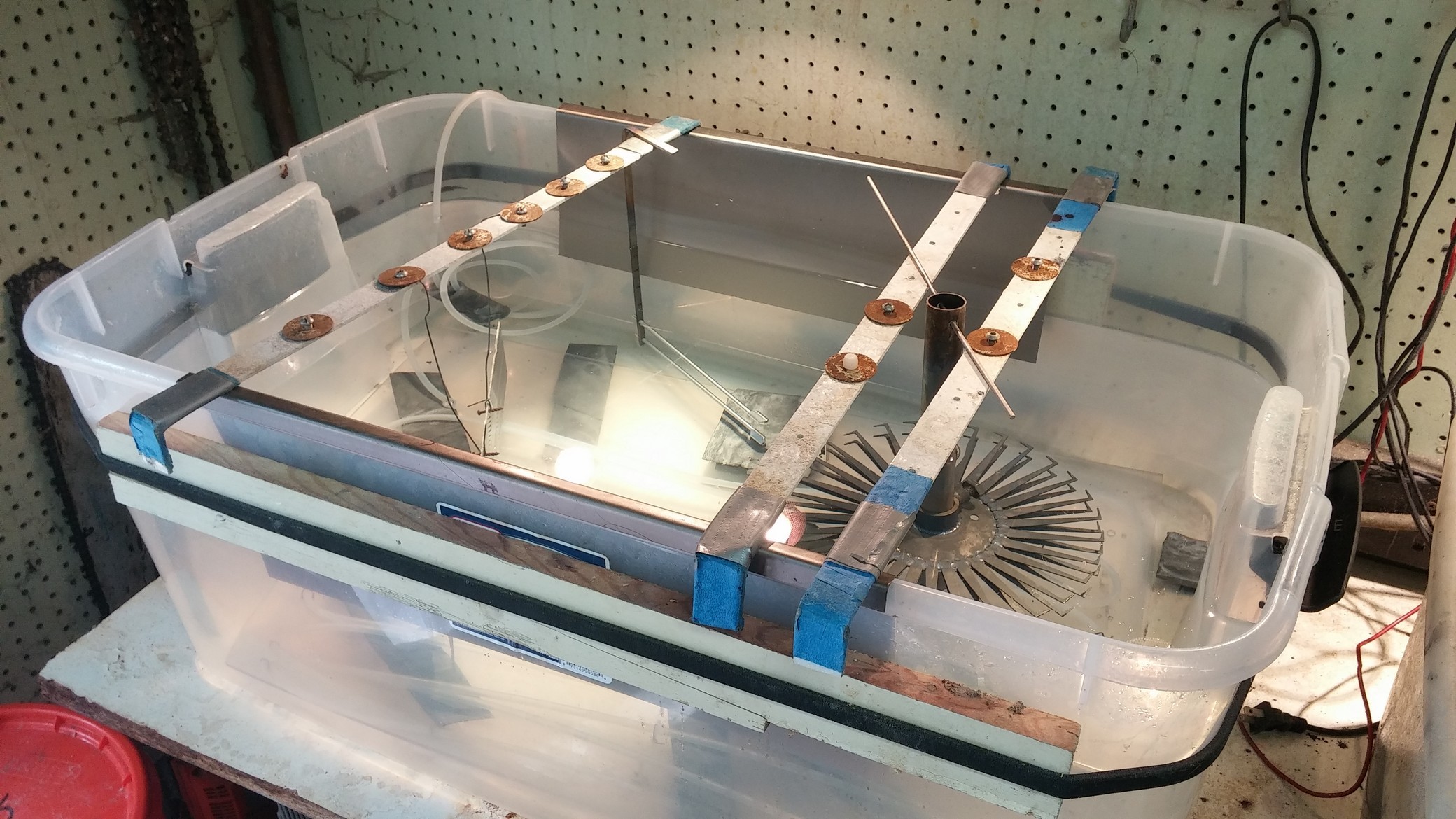 Leads are hooked up, and the agitation is going. Time to wait an hour for these babies to cook. 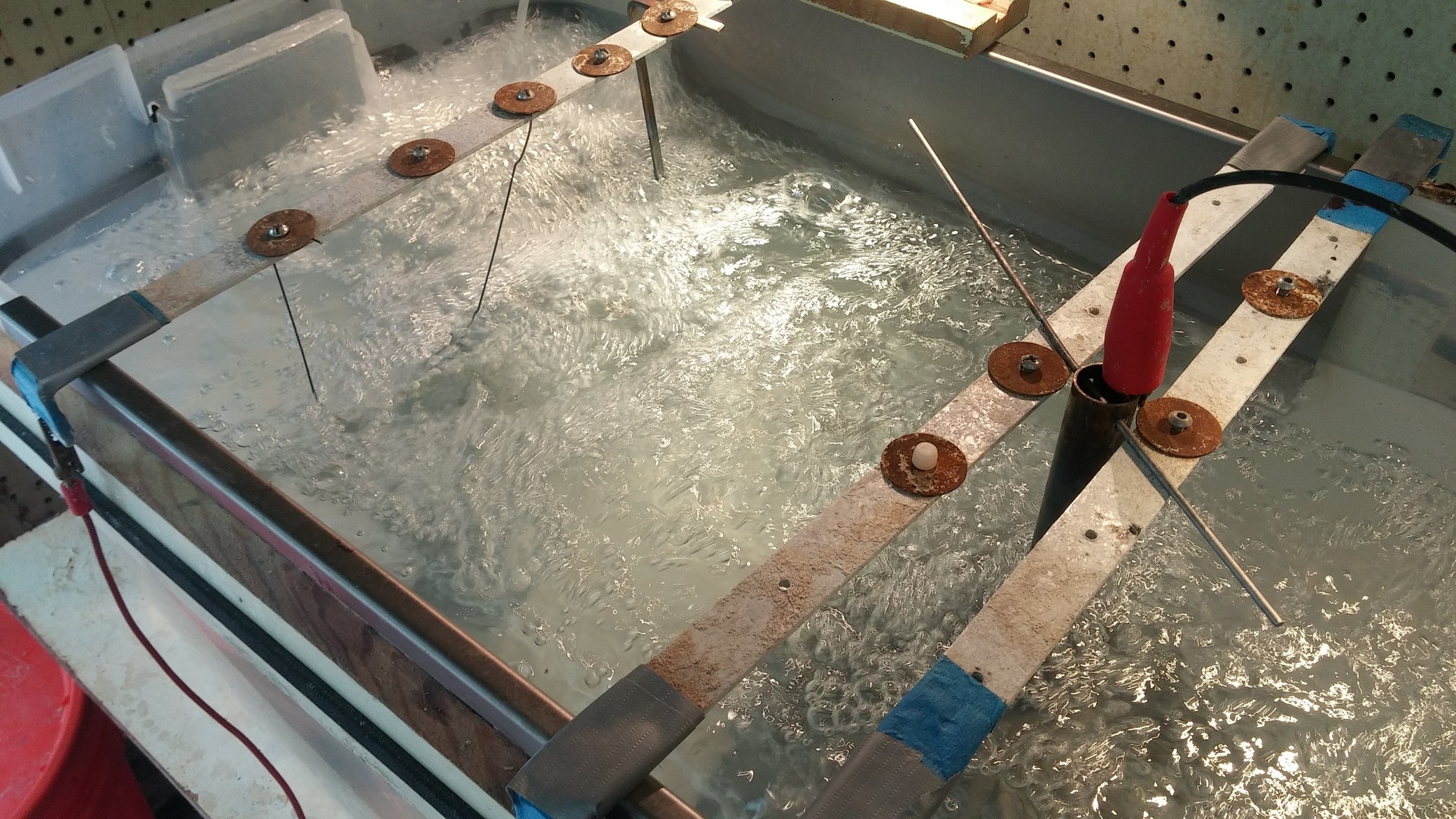 An hour has gone by and its time to rinse the parts really really REALLY well. 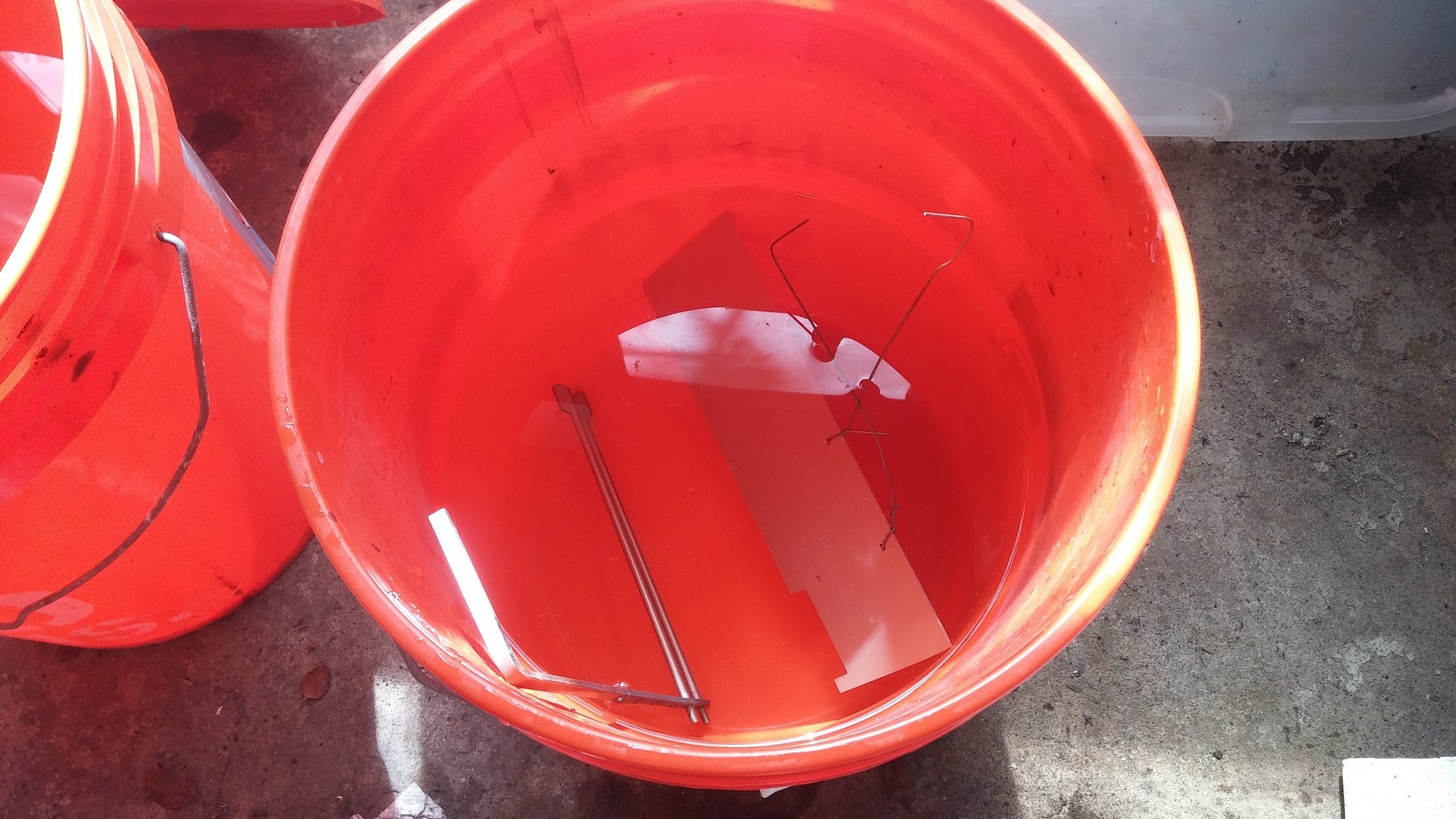 The two colors that will “fade” into each other for the top layer: 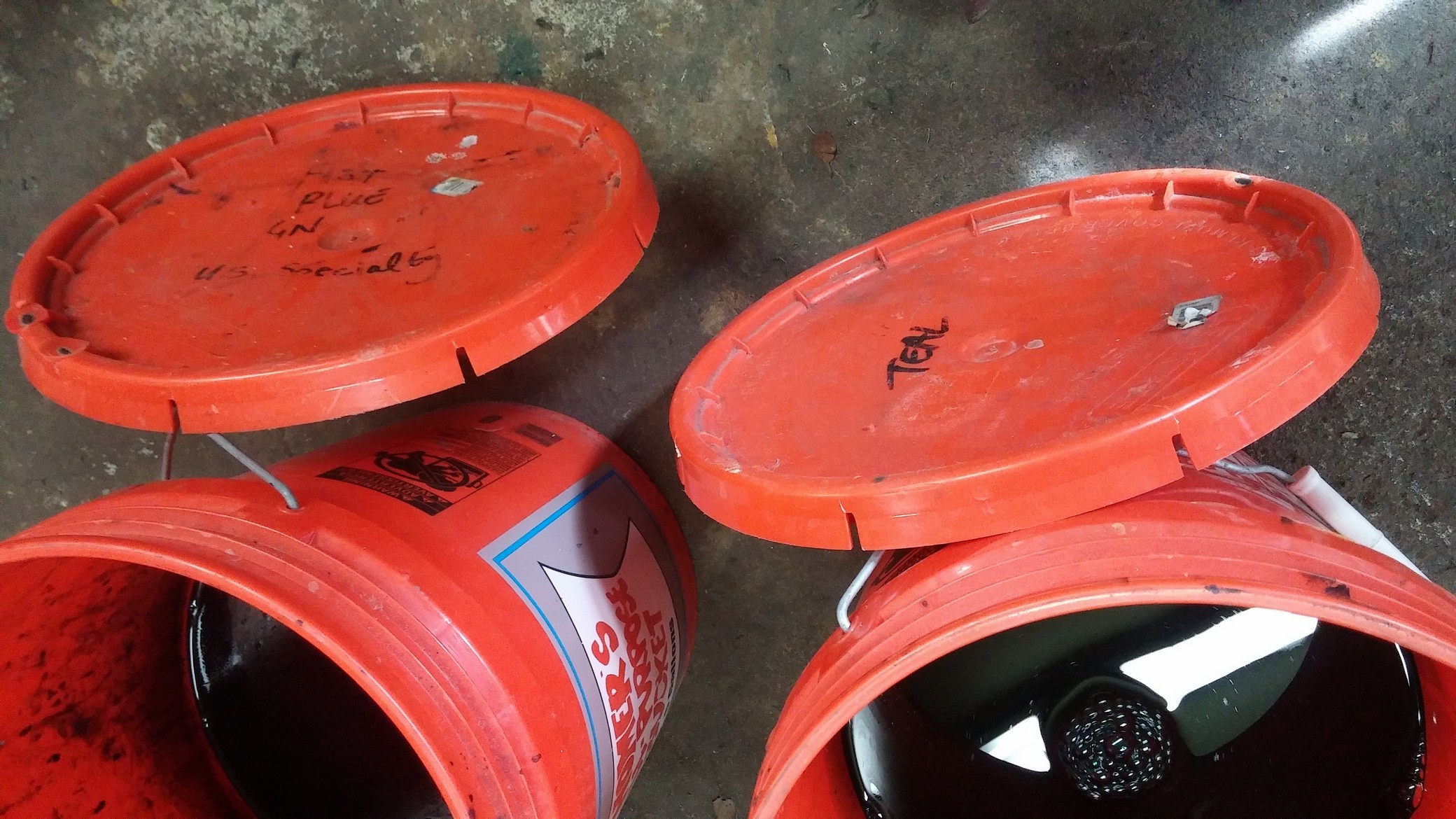 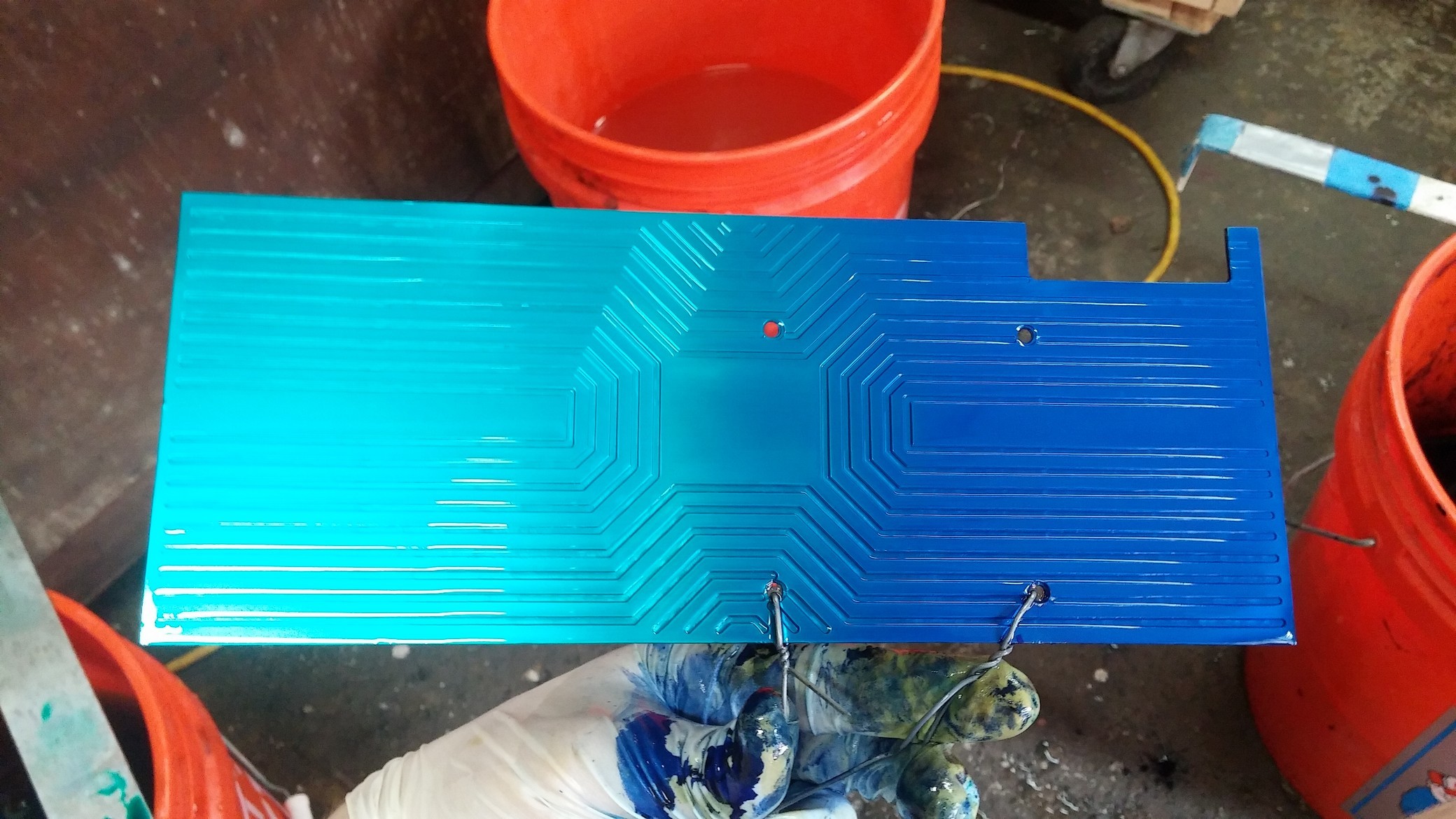 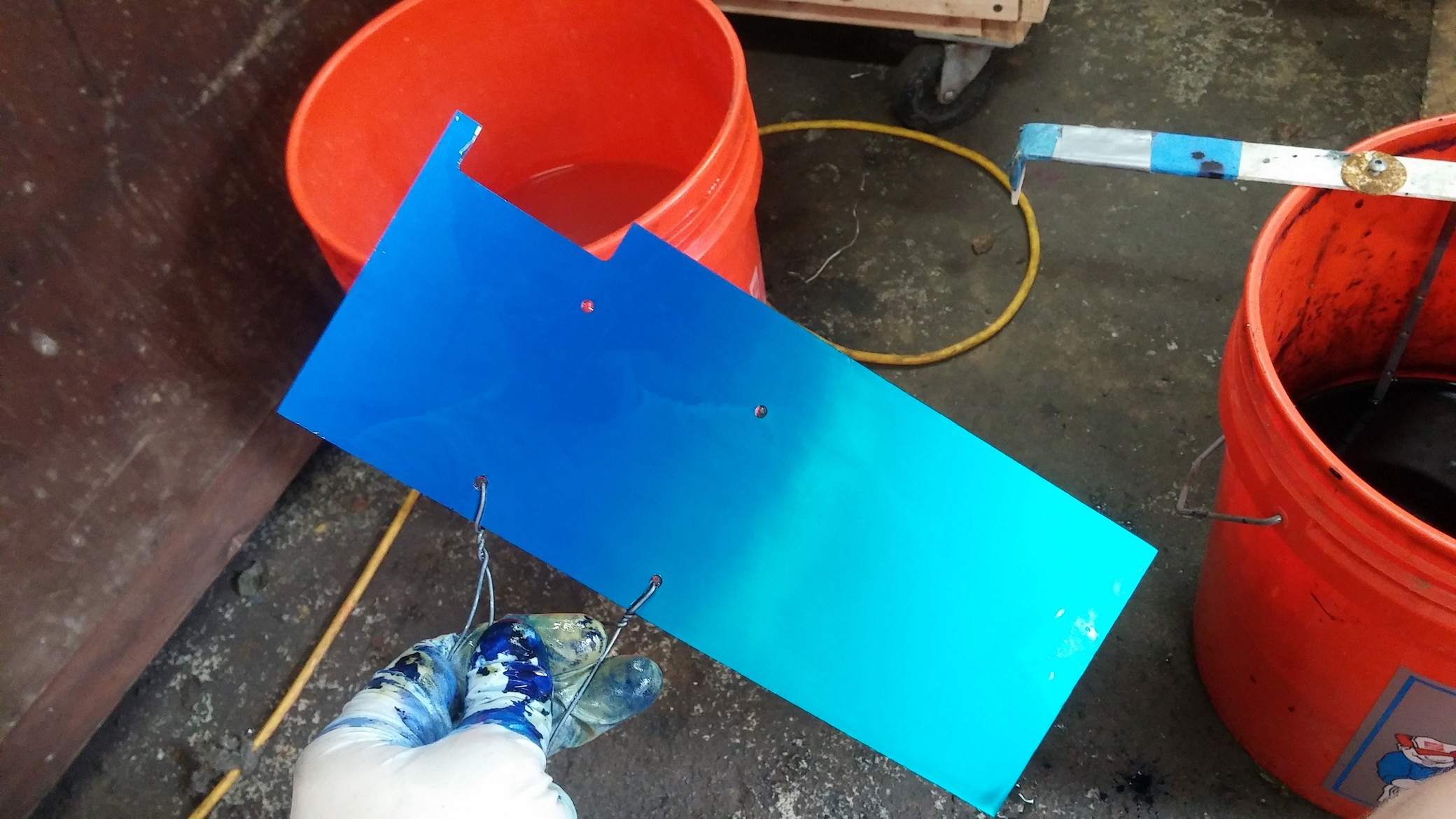 So I tried using a UV Reactive dye for the first time ever when anodizing since I have UV lights in my computer case. I was hoping it would react, but it didn’t seem to work. 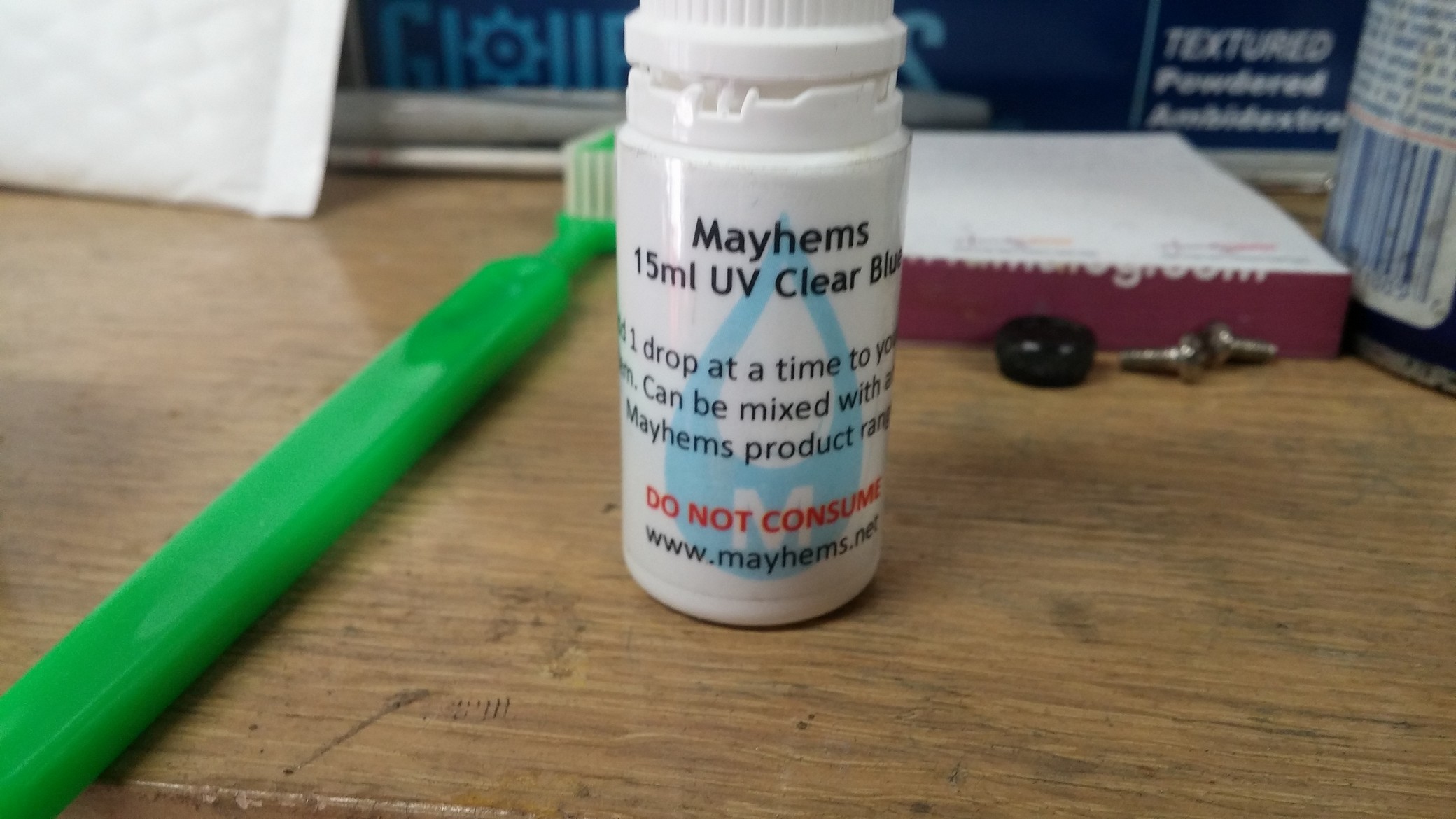 So after the teal/blue fade was done drying, I added the masking to the part and then let that dry (yes, it does look like snot) 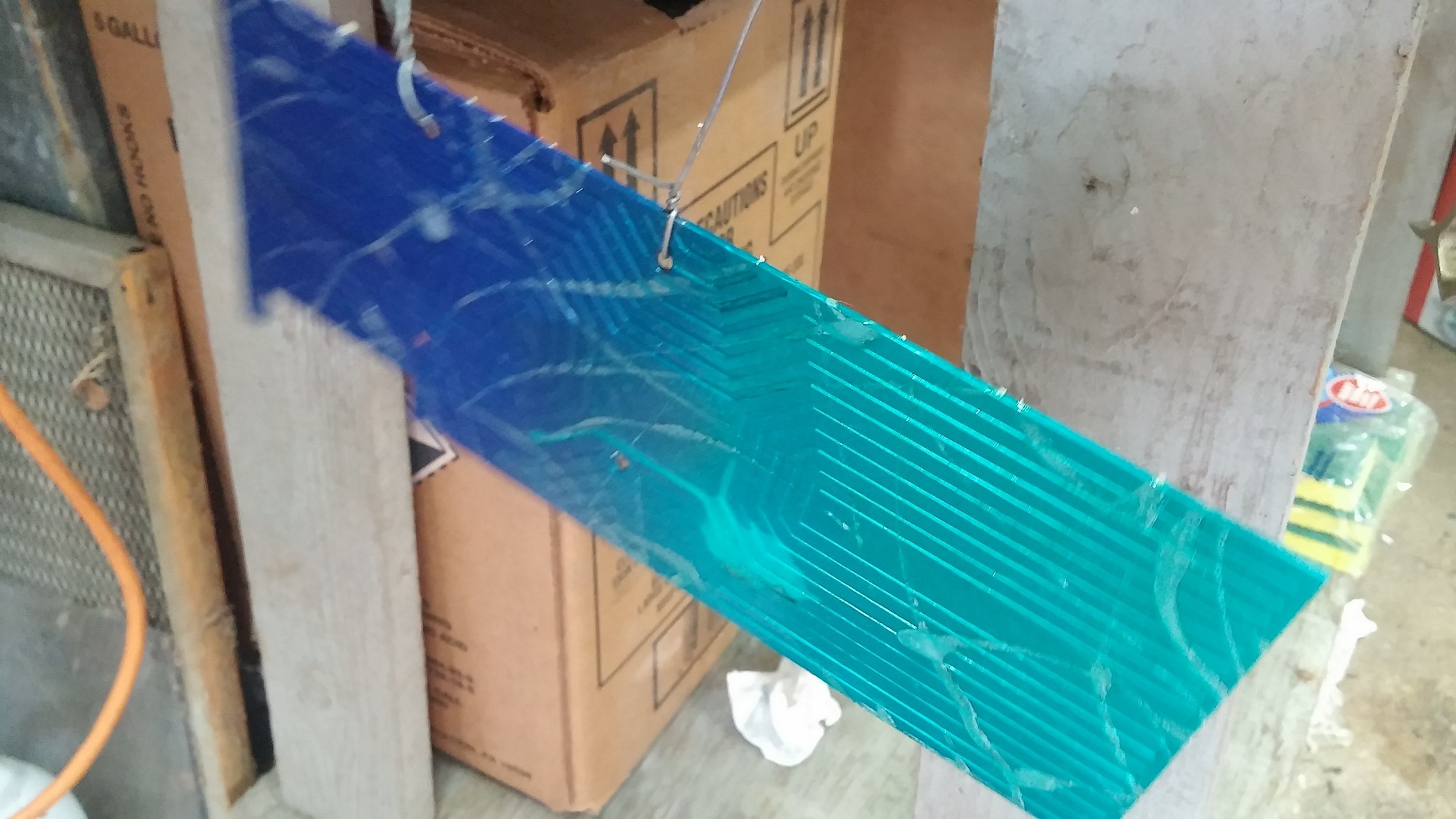 After the snot was done drying it was time to bleach the whole thing, so we have a blank canvas again. Time to put the black “sponge” effect in. Called that because I apply the masking compound with a sponge. 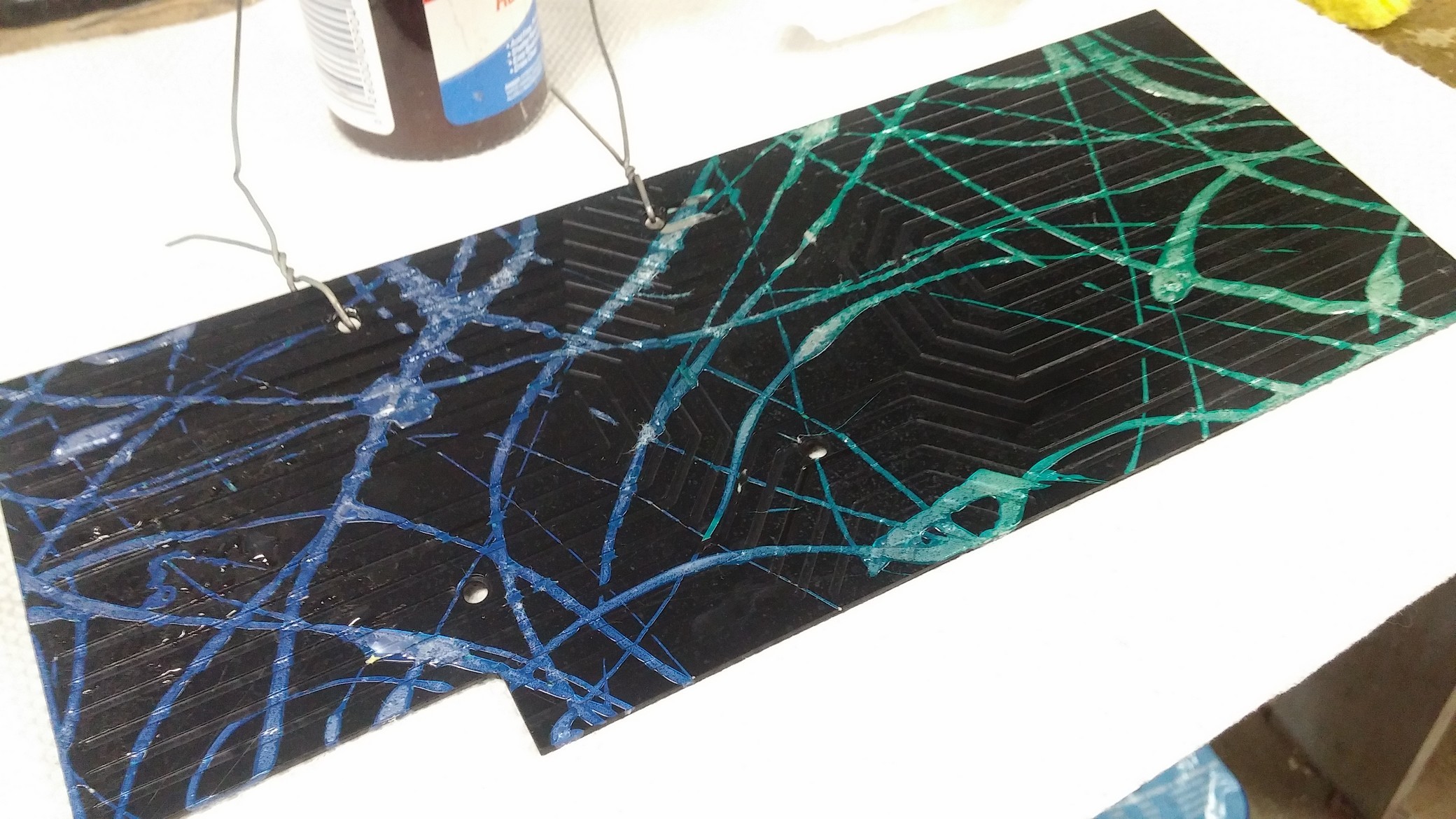 And after its dried and bleached… 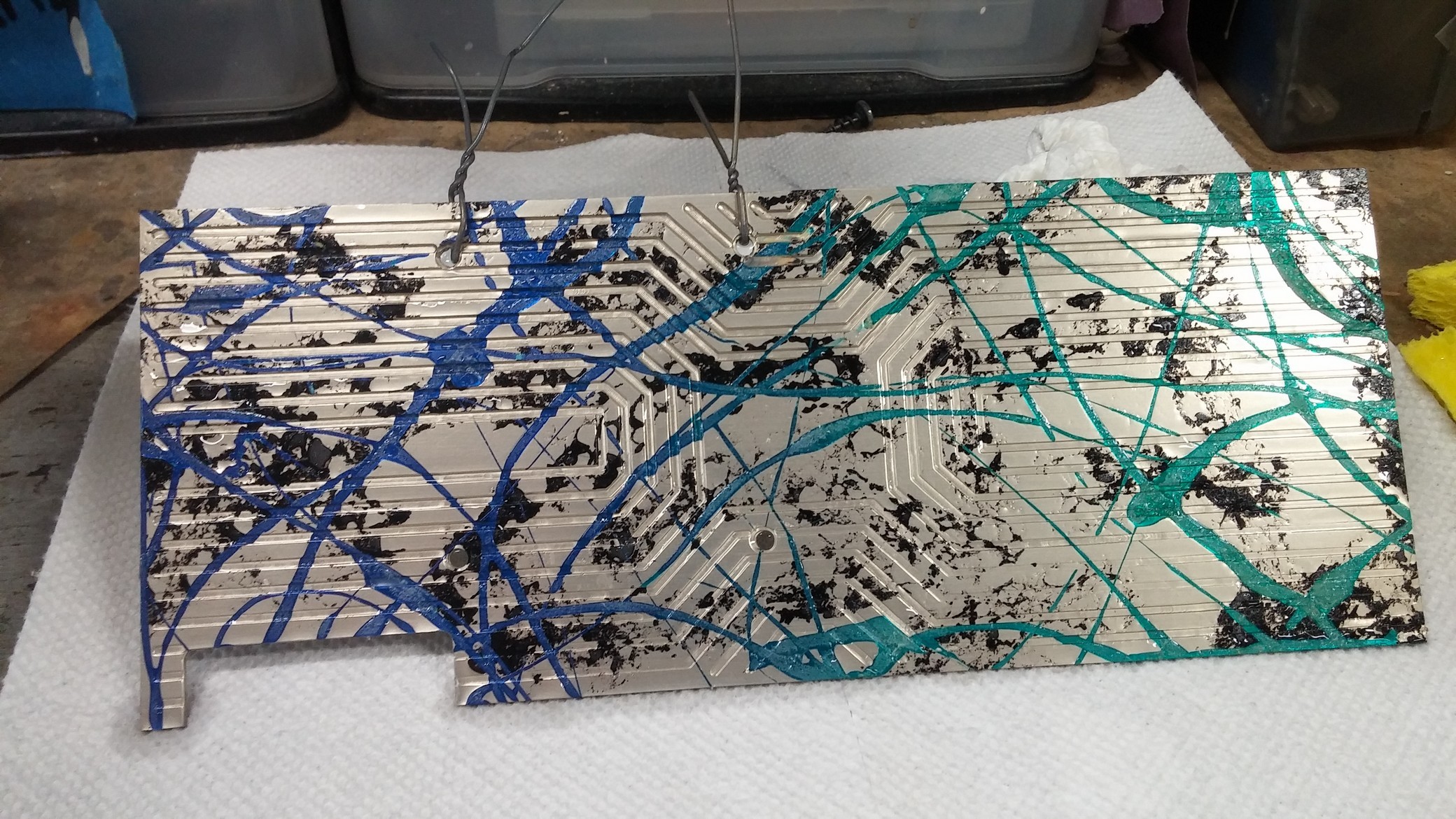 I was actually thinking of stopping there, cause it really did look excellent with the white/silver background. Instead I took it up a notch and finished it off in the purple and lightly acid washing it (those little spots) 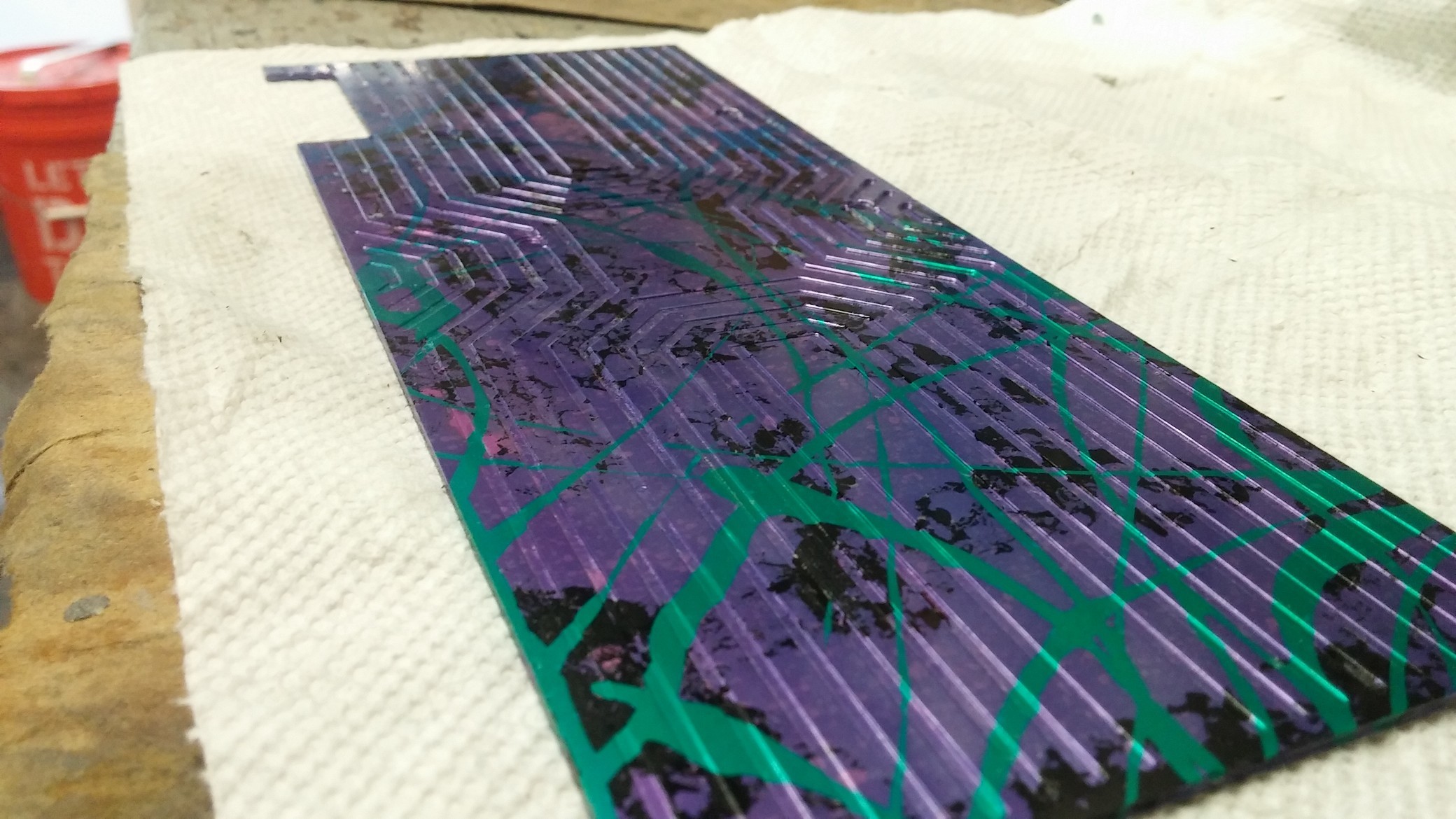 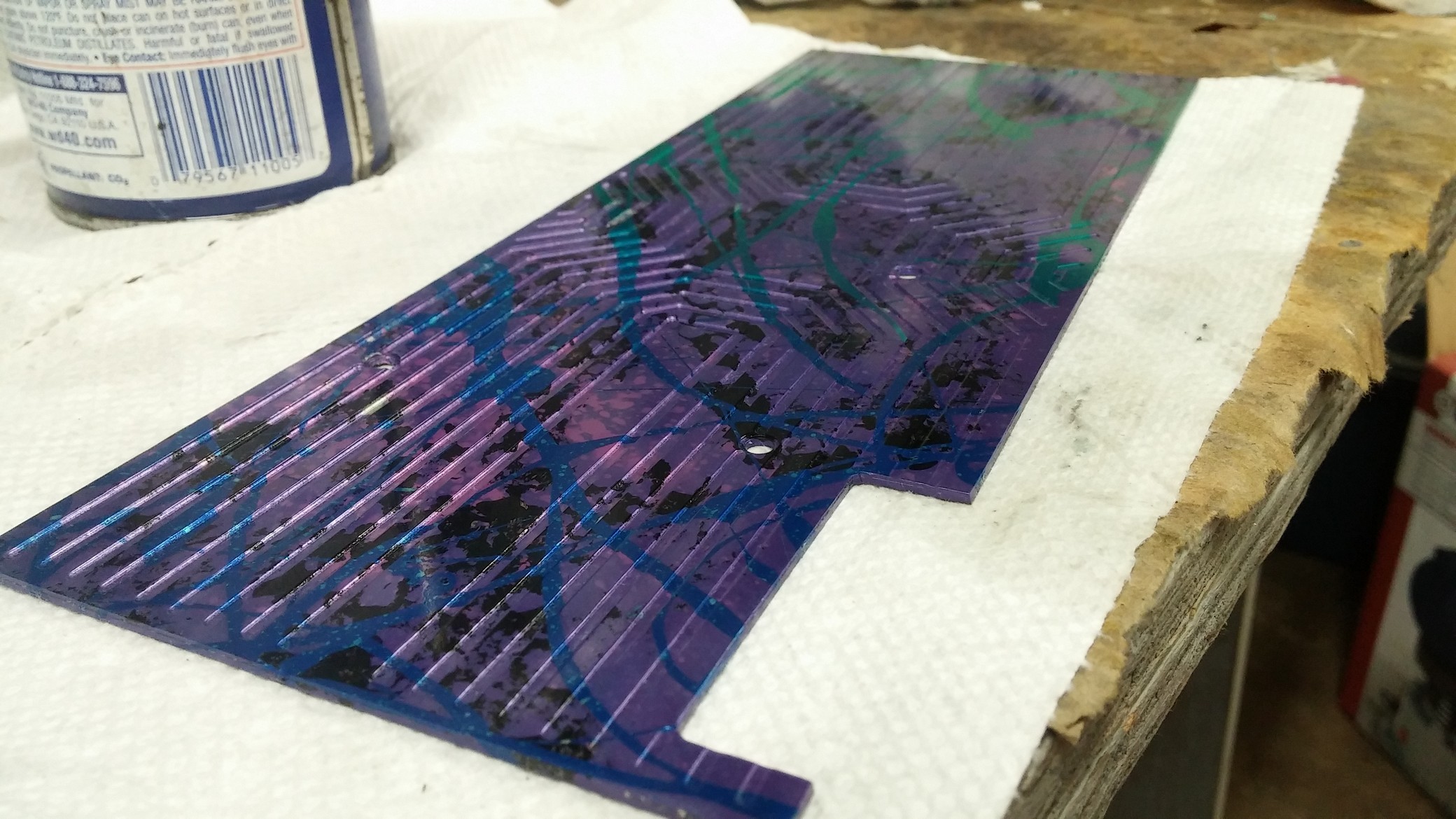 Finally installed with the computer off: 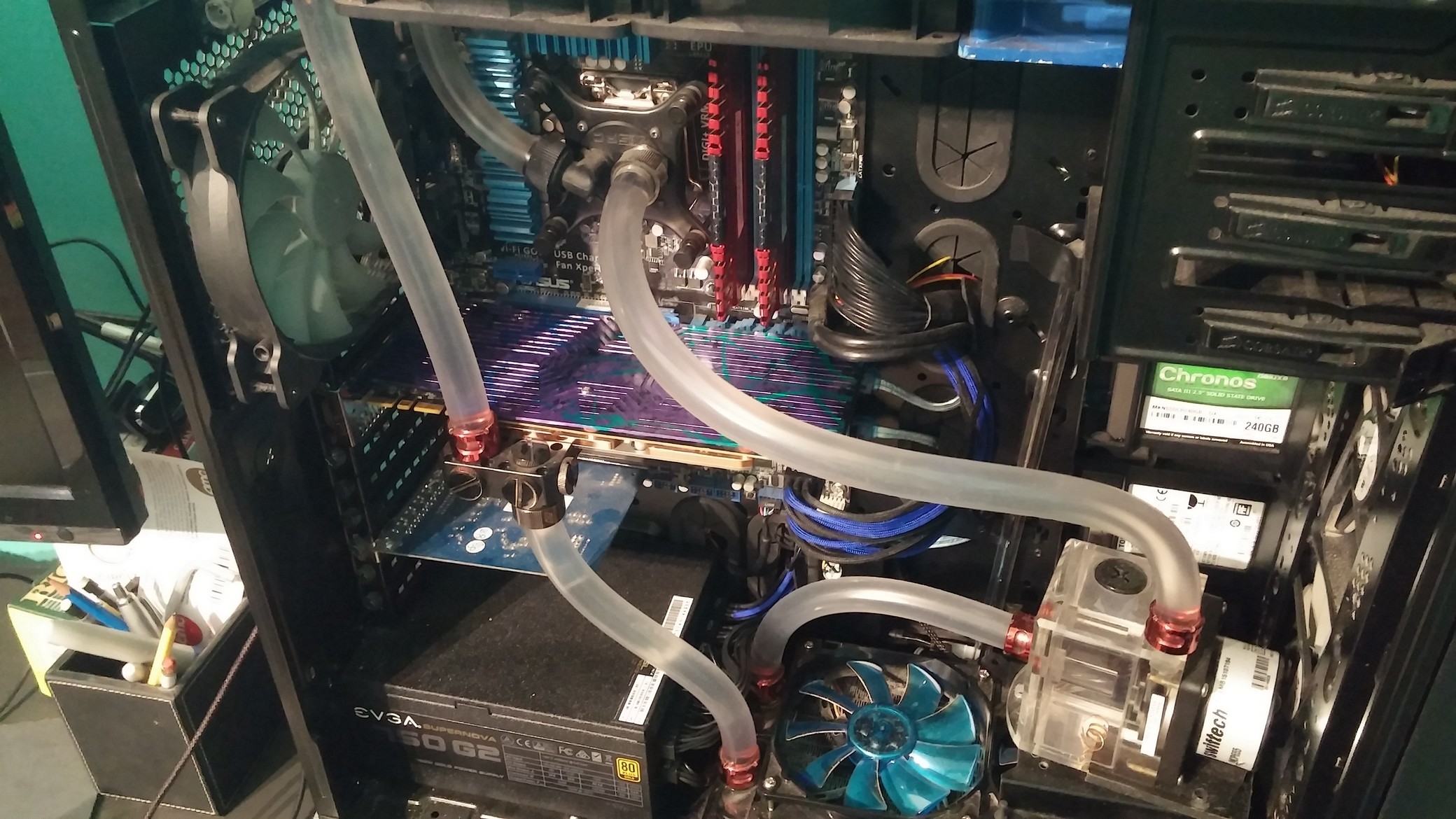 Let me just get the lights real quick… 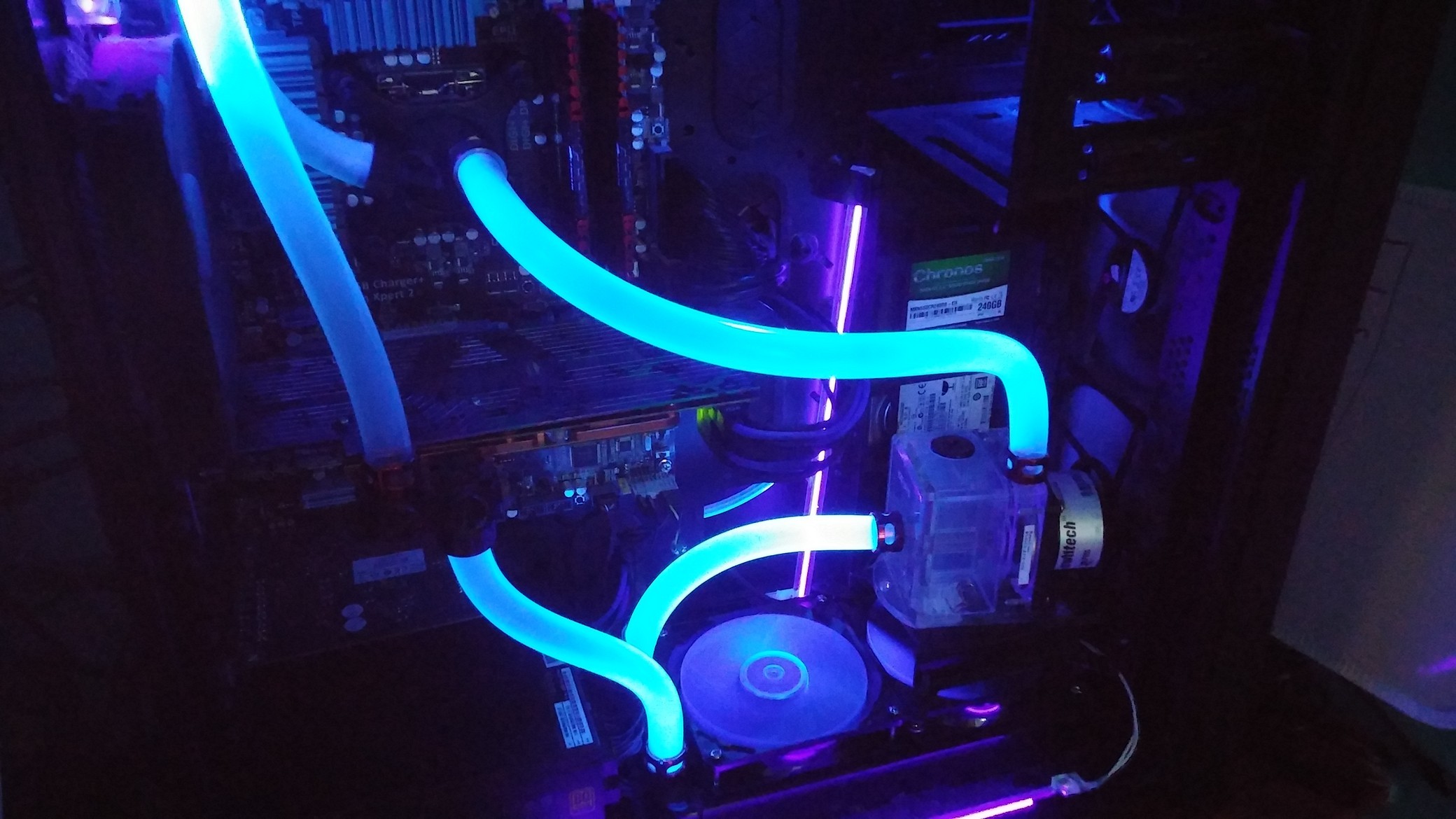 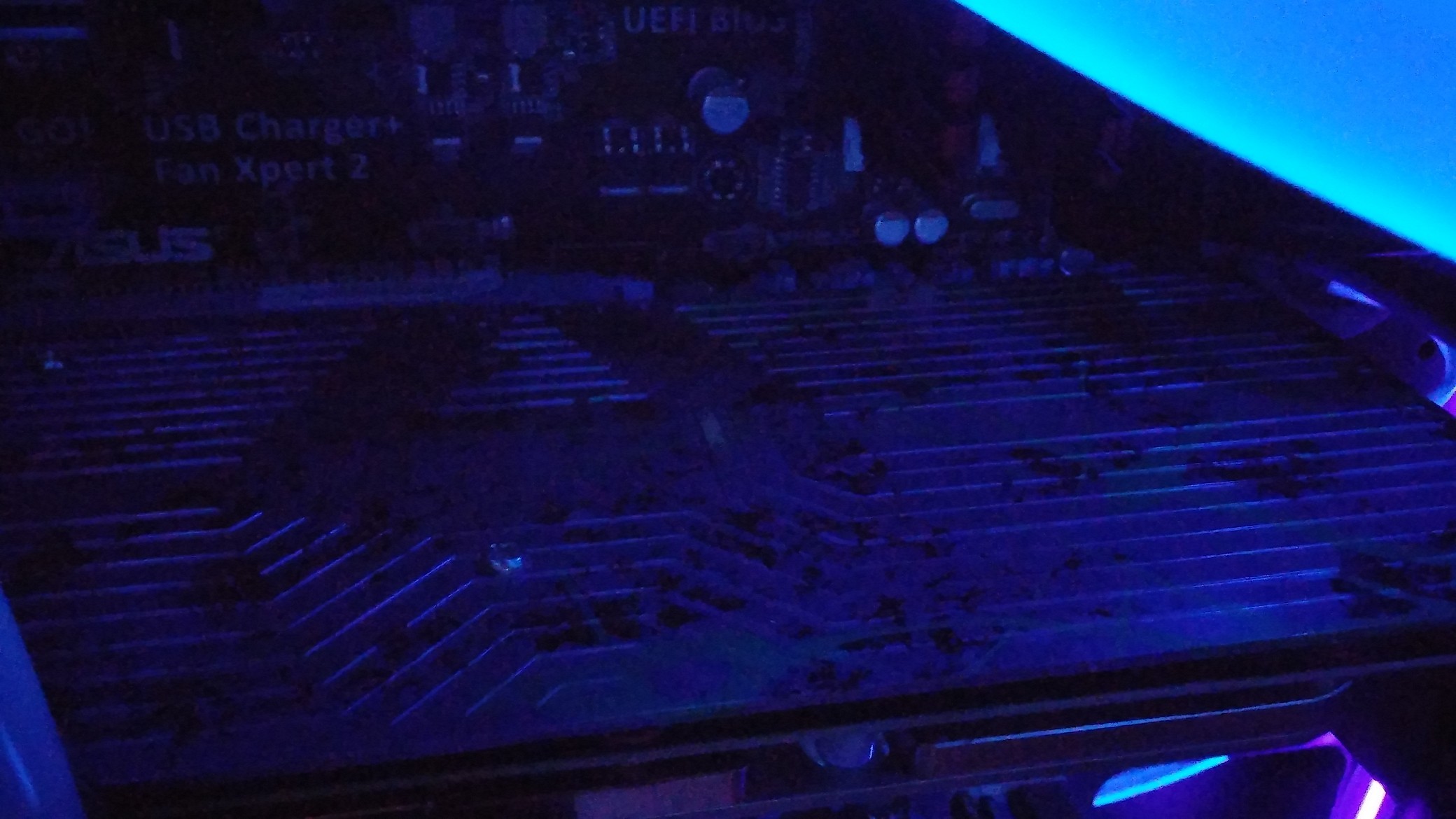 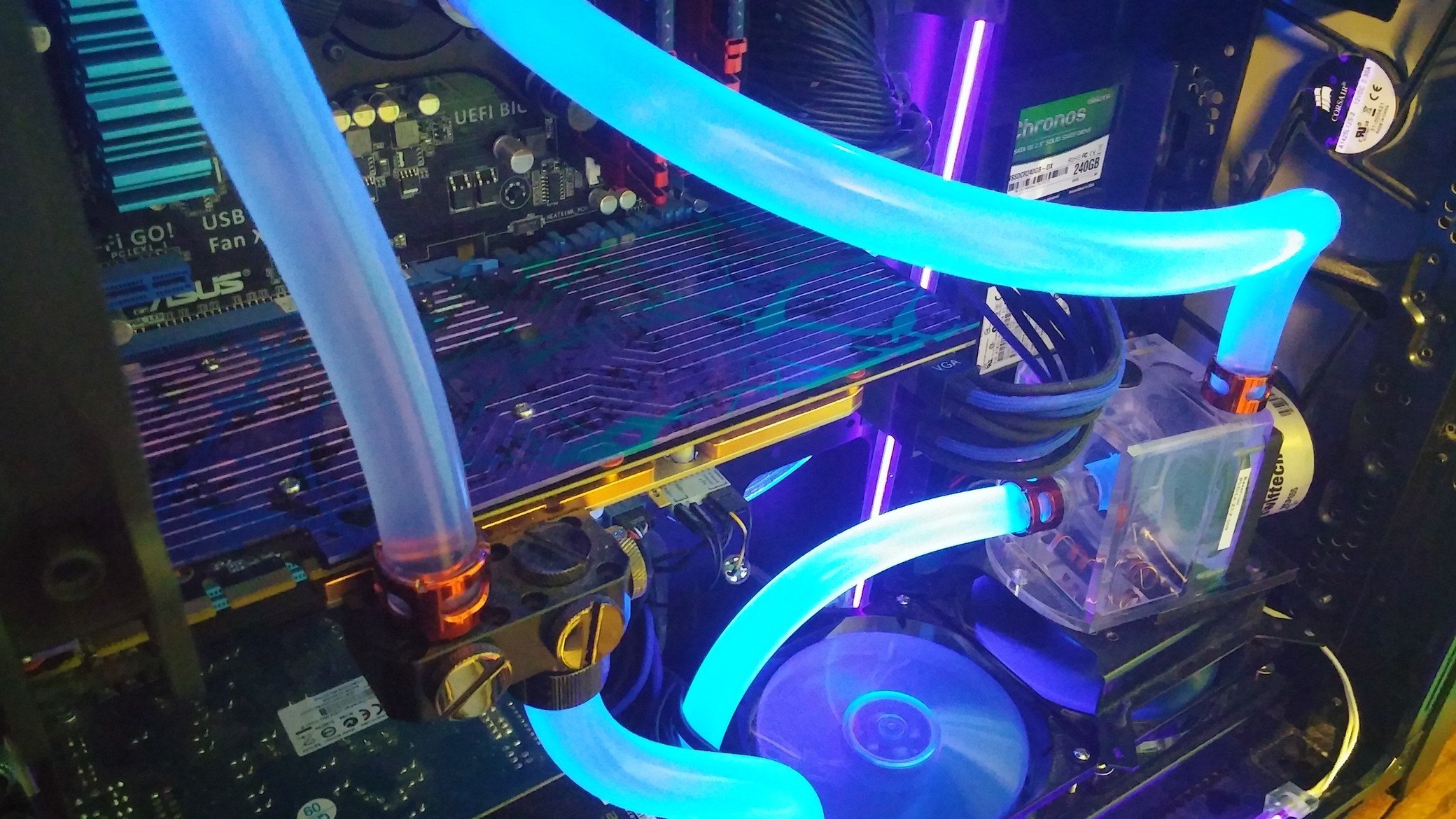 So there it is. Beautiful, and well worth the effort. X-Carve is really incredible tool. I put about 8 hours total into making this part, and to go from idea to fabrication to finished product in that kind of time frame is just astonishing.

I got quite a lot of footage as well, so I’ll probably be putting that together for youtube later on tonight.

Oh yeah, and heres a prototype I cut out of 2 color acrylic. It’s clearly not perfect, but hey gotta practice before doing it for real, right? 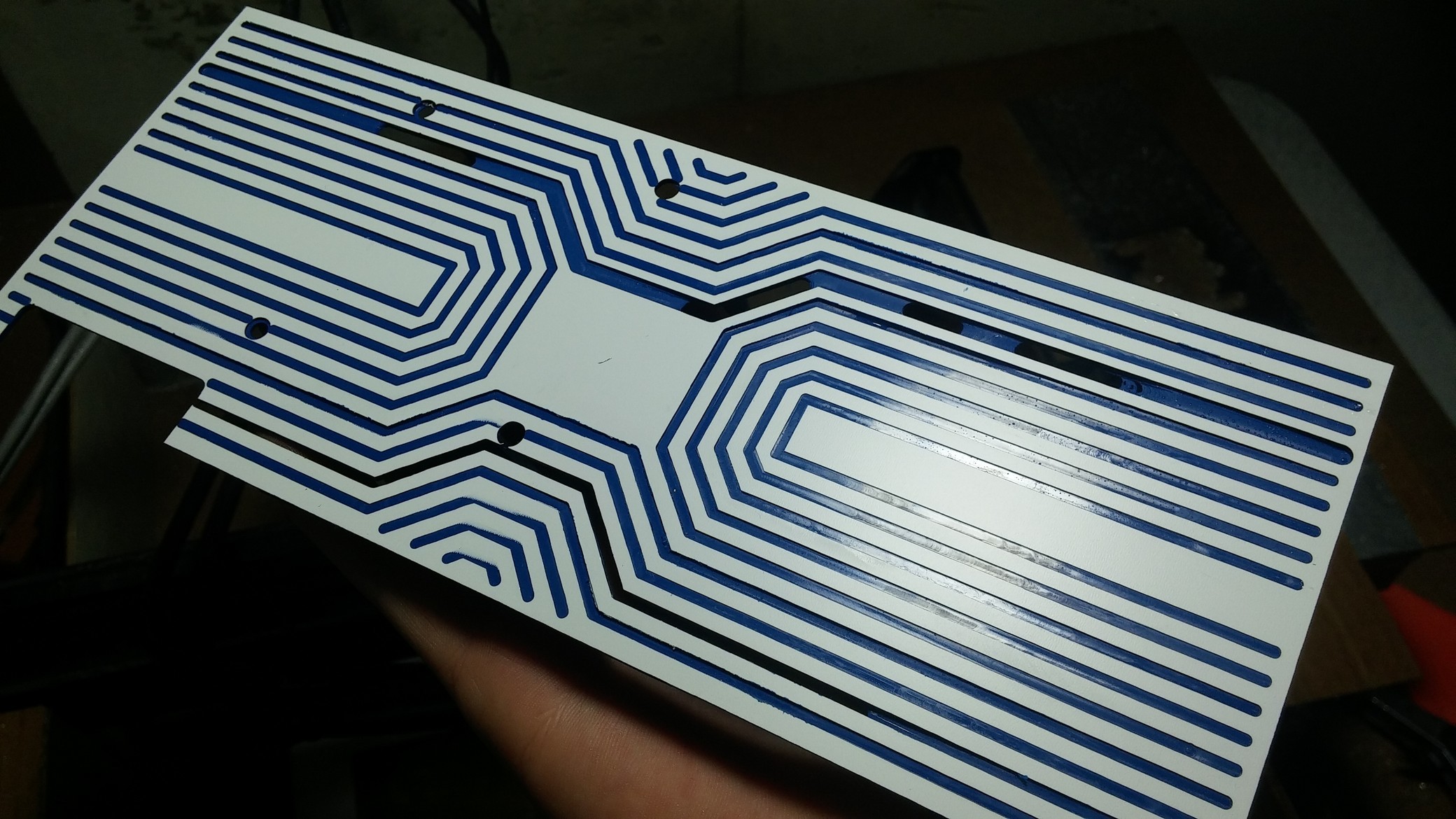 Amazing! After seeing all the work that went into that, I think I would have just turned my computer so the window faced the wall

Thanks! I’m really happy with how it turned out. Now I’m thinking of the next thing to cut and anodize for my computer, haha.

That looks awesome. How much does it cost to get into anodizing? Can a person get started for a couple hundred?

Maybe. To do things right, I wouldn’t put less than $800 into the setup, ideally I’d put about $1k in. With $200-300 you can’t really afford to get a proper power supply, or titanium cathodes/racking. I think its possible, but you will save a lot of time and frustration getting quality components.

If you don’t mind me asking…
What size and type of endmill did you use? And what rpm, feedrate and depth of cut did you use?

@DomenickSalvemini Of course I don’t mind you asking!