I’ve seen some great many approaches to the fabled dust shoe for our Dewalt routers. Here’s my submission, would appreciate your questions/comments and/or insults.

In total its three pieces. Starting from the top, The first is an interferece for around the bottom boss of the router while allowing access to the lock button. The second thin piece attaches using the two screws that hold the lock button in place. the third piece is the actual shoe. Used some hobby magnets to hold the shoe in place and a plastic file folder for the bristles. Link to short video of magnet action at the bottom. Defining success with these things is a relative term imho, but on a ~2hr carve the other day I’d say it only left behind about 5-10% which for me is totally acceptable. 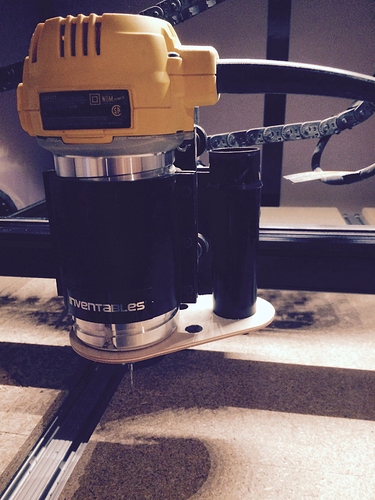 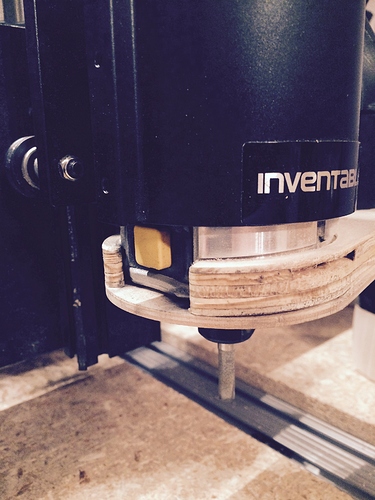 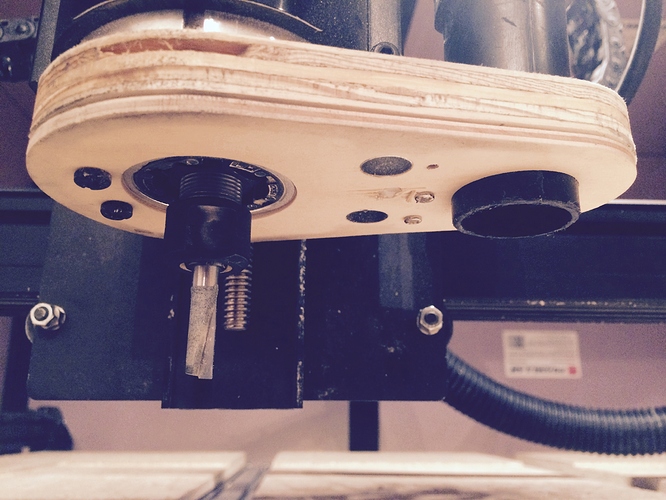 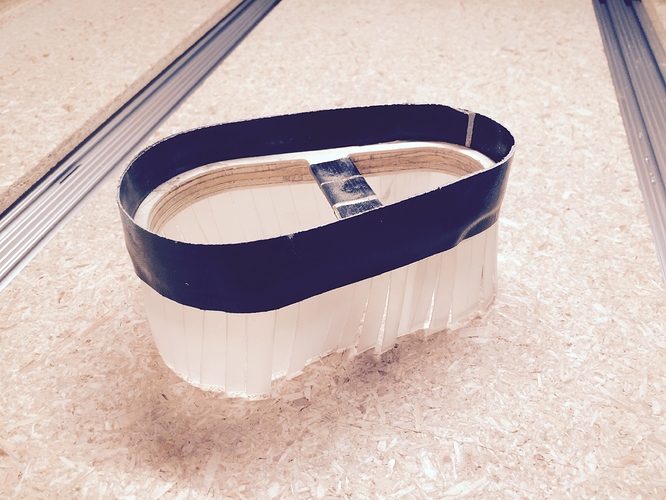 I am afraid that this dust shoe will burn up your router. The shoe needs to have vents so that the air can easily flow out the bottom of the spindle. Unless I am not seeing something, I do not see where the exhaust air exits the shoe.

Yeah, probably, eventually. Hit it with the infrared temp gun a few times and albeit I will admit it was running a little hotter, I think that was more what I was cutting than anything. However I think not having problems yet is probably more a function of average materials (i.e. not great fitment) than it is of design intent if that makes any sense. But for now I haven’t let the smoke out…yet.

I shall report back when I have: a) let the smoke out OR b) have improved upon the original design.

Wouldn’t take much to allow the air to exit. Poor fit will allow for some air flow to escape. Running the machine for long periods of time with it like this might cause some issues though.

Just a little FYI if your not already aware. The Dewalt spindle cools itself by pulling air in through the top and out through the bottom. If no air or very little air is exhaust out of the bottom, the. this will have an adverse effect on the cooling.

The air that flows out the bottom spreads the dust everywhere. But it won’t be that difficult with a few slight mods to your shoe to allow the air to escape above the shoe keeping the air away from the cutterhead.

A simple solution to allowing extra air flow is to add 2-3 washers as spacers between the part that mounts to the bottom. Then notch the other plate (the one that is level to the spindle lock) the notches need to be on the bottom of this piece. This will leave a vent between the two pieces of wood allowing the exhaust to exit. Or just drill a few holes in the sides and have enough slop around the spindle so that the exhaust can easily reach these holes.

The air flow for the motor is absolutely critical so do not use the shoe until that is fixed.

I tried the “plastic curtain” approach (rather than using bristle) on my rather long journey producing my own solution. I found that it was not good enough and bristle is much better.

Also, I received some excellent advice and modified my design to make the shoe independent of the Z movement by fixing it to the gantry - a great improvement there too.

Honest to goodness I’ve read every dust shoe post on this forum but somehow I forgot about this air flow issue when drawing up the parts. Haha, oh well…if the embarrassment saves me the cost of a router so be it.

Totally dig this design above, nice cutaway! I think I’m going to try to do something like this next, but find a way to attack it with a sliced approach (I think you 3d printed this right?) Might try the washer thing as mentioned above in the interim before I go further.

The adjustable shoes are nice however I like the simplicity of the fixed shoe. So long as you keep it mounted above the bottom of the collet you’re in good shape.

In regards to the brush/plastic approach, I suppose we’ll see once I revise the design if the change in air flow affects the performance. But for now i’ll stick with the 0.50 cent plastic folder route

I’ve experimented extensively and can dispel a few myths. If you go ahead and let the air blow through, with a proper skirt, this air flow actually helps clear chips into your vacuum dust port. The volume of air coming from the router is considerably less than the volume being sucked up by the vac. Also, this air coming from the router diminishes the vacs tendency to suck your skirt legs in toward the bit. In short, it does not need to be diverted (though mine is because I discovered all of this too late on my first machine - not on my second). As for plastic skirting, it works GREAT and if you use clear you can still see what is happening. The brush is only very slightly more effective. The trick is learning to cut the slots in your plastic skirt to the right level. Plastic skirting (shelf liner) is also about a dollar for a year’s supply of skirting. The Dewalt has leds to light up your work, it would be a shame not to take advantage of that. I mounted LEDs to the bottom of my shoe along with a tachometer. My skirting is held in place with velcro. Open it up, change bits, press it closed. Or rip it off in a fluid motion. Cut several skirts as stand-bys or at different heights for extra long bits. They take about a minute to make and you can have a whole stack of them in a drawer.

It does not need to be overly complicated IMHO. Just thought I would share my experiences before too much of your time is (potentially) wasted on this issue when you could be enjoying more awesome exploration of materials, projects and other mods.

Thanks for the tips tricks and insight Earwigger! It’s fun to see everyone’s different approach to this one project - there’s a thousand different ways to approach it and sharing our ideas is part of what makes this community fun.

I have disassembled the shoe and in the short term am just going to modify the thin 0.125 plate by drilling holes to allow the exhaust to properly exit. In the future I may come up with a 2.0 version but in the short term but so long as it continues to be effective I’m going to let it go for now.

In the future I think it would be good to incorporate a left handed sky hook and two additional muffler bearings, but one cannot be picky of course.