Any news on back ordered power unit

Still waiting for my power unit and case to arrive. Anybody else waiting, looking at a carve 90% done.

Power supply? If so when my x-carve shipped I got a back order email that said they expect to ship them on the 8th of Jan.

Same Here When I ordered they said back ordered parts are to ship on the 8th!

I just got an email that my power supply shipped.

Just got my email be here tomorrow. Can’t hardly stand it . Excited

It’s actually the PCB interface that’s on back order. You can email inventables and ask them to send the PSU kit right away and just forward the PCB interface when they re-stock. I asked them if they could swap out the default 400 watt PSU for the 240 watt one and they explained that the reason for not sending the PSU was because they were out of the PCB interfaces and shipped the 400 watt PSU out that same day. Awesome stuff. Now I’m just waiting on a spindle/PSU from Hong Kong that shipped out monday and looks like it will be in my hands when the local post comes around at noon.

yup. waiting on the power supply kit, dewalt 611 and mount

I ordered my X-Carve a few days after the black-friday sale ended, on Wednesday the 16th of December, and my machine came the following Wednesday on the 23rd. I, too, was notified about the Dewalt spindle/mount, and the PSU kit being on back order, so just to get my machine running and moving around I sent them an email asking if they could just give me the lower power unit instead and they promptly sent out the kit sans-PCB interface instead. To get up and running ASAP I also went ahead and bought the universal mount and a spindle mounting plate, so that I could order and use this:

which came in record time all the way from Hong Kong, shipping out this last Monday, on the 28th, and arrived on Wednesday the 30th here in northern California.

I’ve already been getting the machine dialed in, figured out that my belts weren’t tight enough, getting everything squared up, and still working on a reliable system for mounting my workpieces to the machine. I have been so busy on my machine that I haven’t been on these forums at all! doh!

Here’s how I have the X-Carve PSU and spindle PSU setup together: where the cheap Chinese PSU, which lacks a fan, is taking advantage of the temperature-controlled automatic fan in the top of the X-Carve PSU by being placed upside down ontop… I need to build an enclosure for the whole thing that only exposes the top fan, the USB plug, power coord, spindle speed potentiometer, and outlets the stepper cables in the braided sleeving on there. A sprinkling of vent holes would be in order as well. 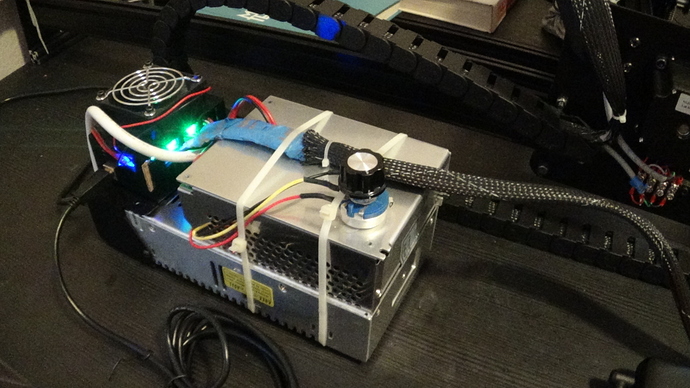 One of the major issues I had, initially, was massive vibration at higher RPMs. Tightening the Z axis V-wheels helped, but eventually I discovered that the real source of the vibration was the Z axis ACME lead screw that is just hanging below the delrin nut. I’m thinking about flipping my mount plate upside down because I currently have the delrin nut screwed into the top pair of screw holes on the spindle mounting plate, and then have the universal mount on the bottom two, this leaves too much of the screw hanging below the spindle than is really necessary. My initial reasoning for doing it his way was to be able to have the spindle mounted as low as possible because I am essentially engraving metal plates directly to the 20mm aluminum extrusions that are connecting the front and rear of the machine. I’m sure I could get away with flipping it: 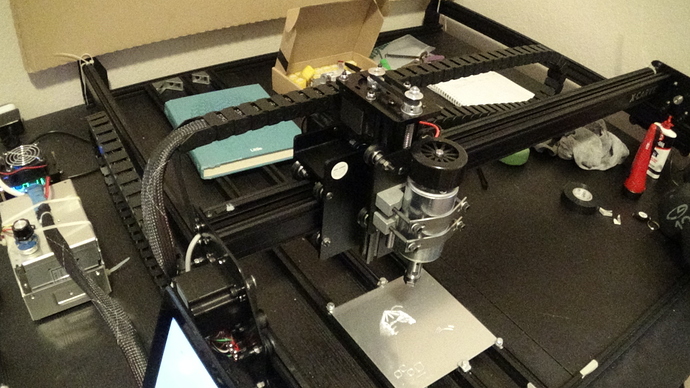 Today I will be hooking up to the A5 pin on the Arduino to get a touch probe setup going, because lastnight I discovered that I couldn’t get away without heightmapping the aluminum plates I am machining without some of the cuts becoming uselessly deep.