Anyone interested to try my file on the X-Carve

I am an artist that uses found objects and reclaimed wood to make clocks. Currently I buy time on a Laser cutter but I don’t want to rely on someone else’s schedule. I have been researching about the X-Carve as much as possible. I’ve read just about every posting on the forum and watched a handful of youtube videos. I spent a few hours yesterday playing with the Easel software. I was able to import a file from Corel Draw (saved as .SVG) with success… I think…Is anyone interested to try my file on the X-Carve? I use A LOT of 1/8 mdf because i get the mdf for free. I know that machines have limitations and I am willing to work with that. To see examples of my work visit www.davegrewaydesigns.com

I’m a noob, but I’m looking for things to cut while I get everything dialed in. How crazy a file are you talking? Can you share your Easel project link?

@DavidGreway I checked out your site and your designs are pretty awesome. I would be willing to try something for you.

If you have an Easel project setup, look at the sharing widget to allow others to access it then share the link here.

i just saved the easel file. the over all size should be around 5x5 inches.

@IanWatkins @JonathanYarum i just replied to my post with a link to the file in easel. thanks for any help you are willing to give. 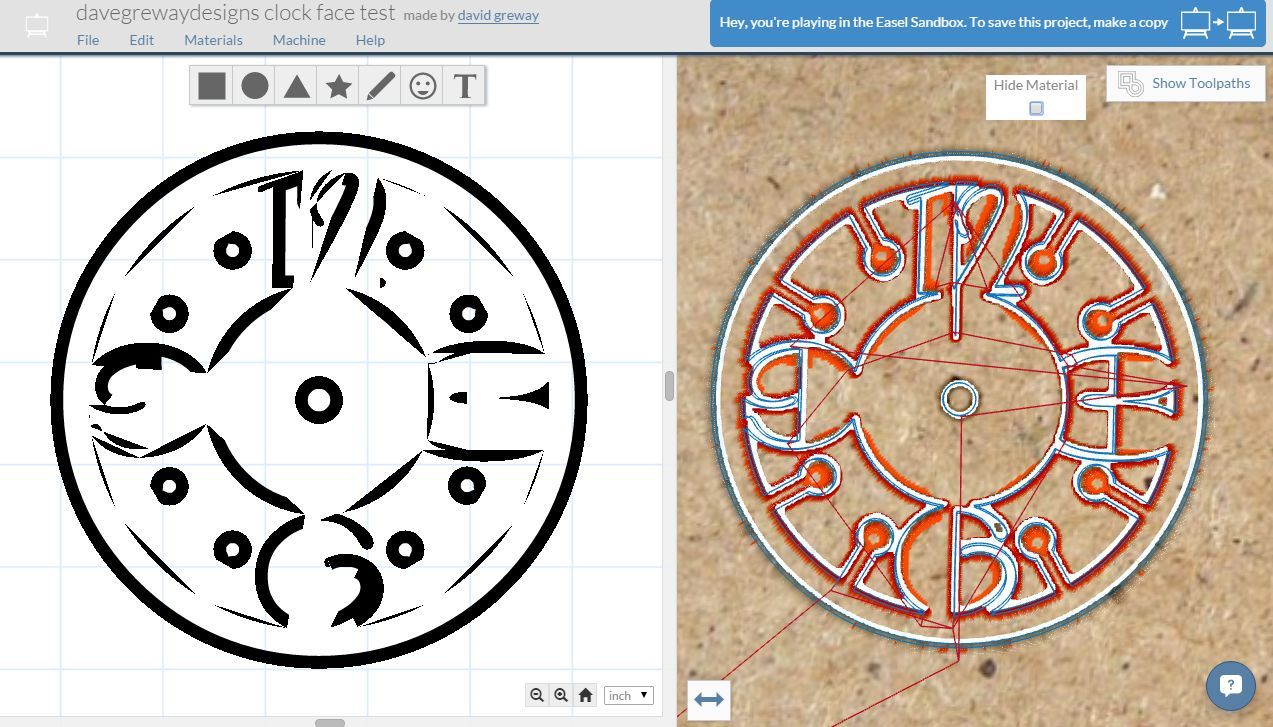 this is what i see. 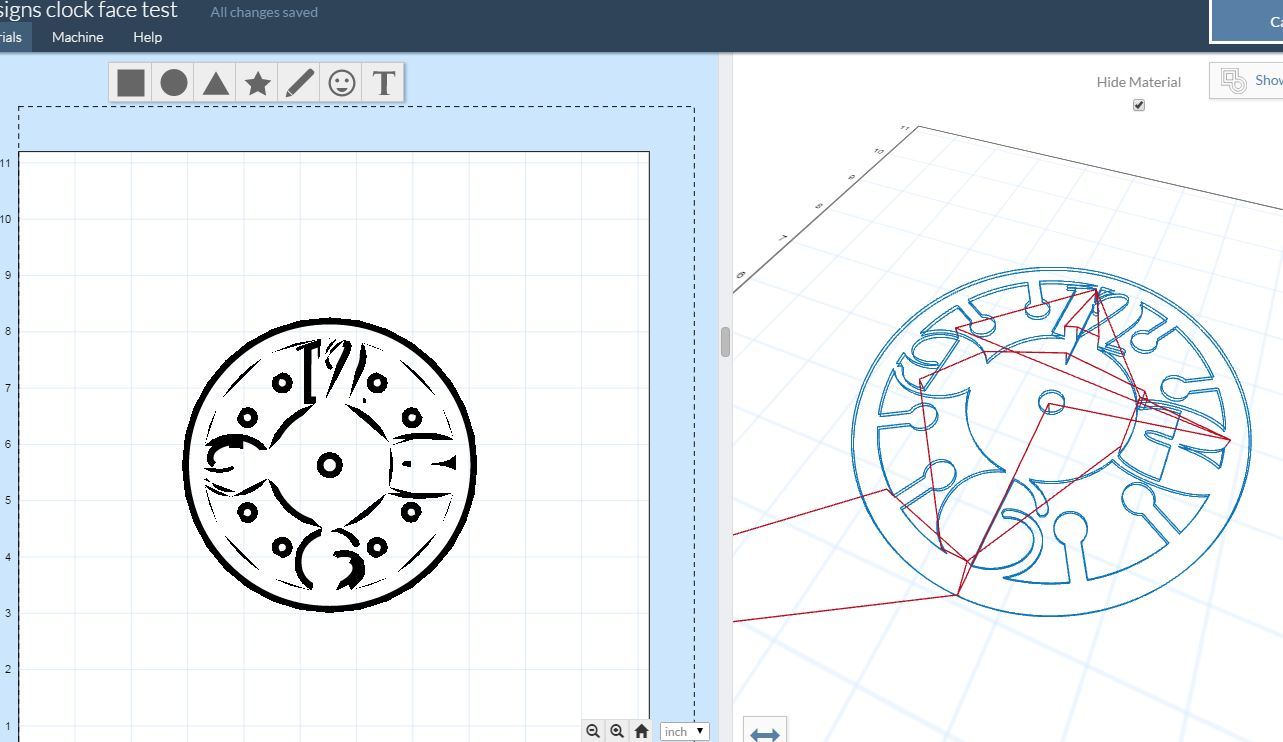 You’re looking only at the cut path, not the width of the actual cuts.

Based on Tony’s 3d preview, most of the interior parts are going to fall out leaving an interesting looking ring, but probably nothing visible that resembles numbers.

There’s also a lot of “hidden” elements. Either those lines are so thin (like the straight line through the 6 and the 12) or they’re something like invisible guide marks. I swear I saw another thread about those, wondering if that’s the same thing we’re seeing here.

so what happens when this file goes to the x carve? i attached a sample from the laser cut clock face. this is ideally what i would like the outcome to be. 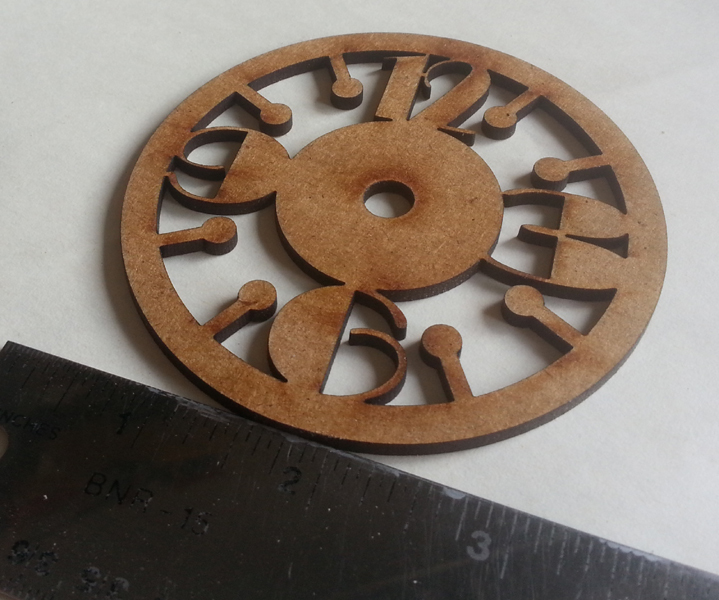 The objects in the Easel file look to be a Hodge-podge of partial shapes. Can you post the SVG? Maybe the source will explain things a bit.

i hope this is what you are looking for its a screen shot. when i try to upload the file nothings happens?? 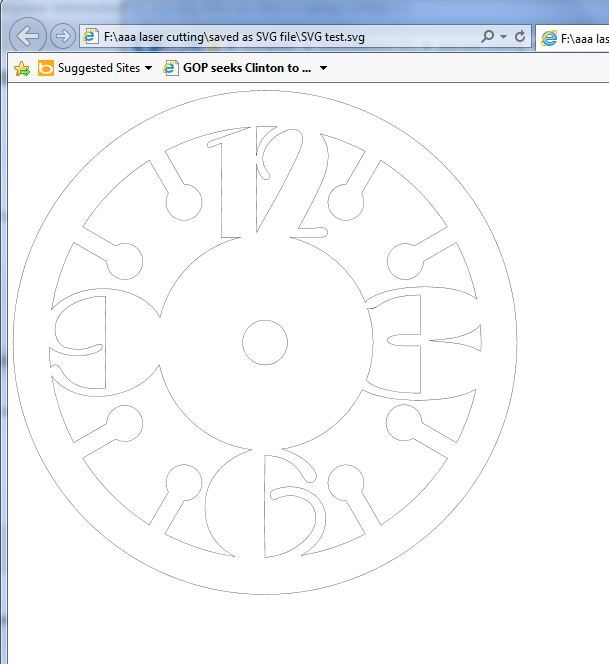 That looks like what I would expect. I’d guess that the conversion to SVG from Corel was not “correct” for these purposes.

You also have to remember that the x-carve has a tool that is a 'lil wider than a laser beam.

I just copied, and scaled the image, and I see several areas with only 0.030" clearance.

@TonyNo whats the thinnest cutting bit you have? ill draft something else in Corel with that bit in mind. whats it look like when you scale it?

I bet it would work fine if you use the beta, two-stage cutting, and use a bigger one for roughing.

This is what I would expect to see, 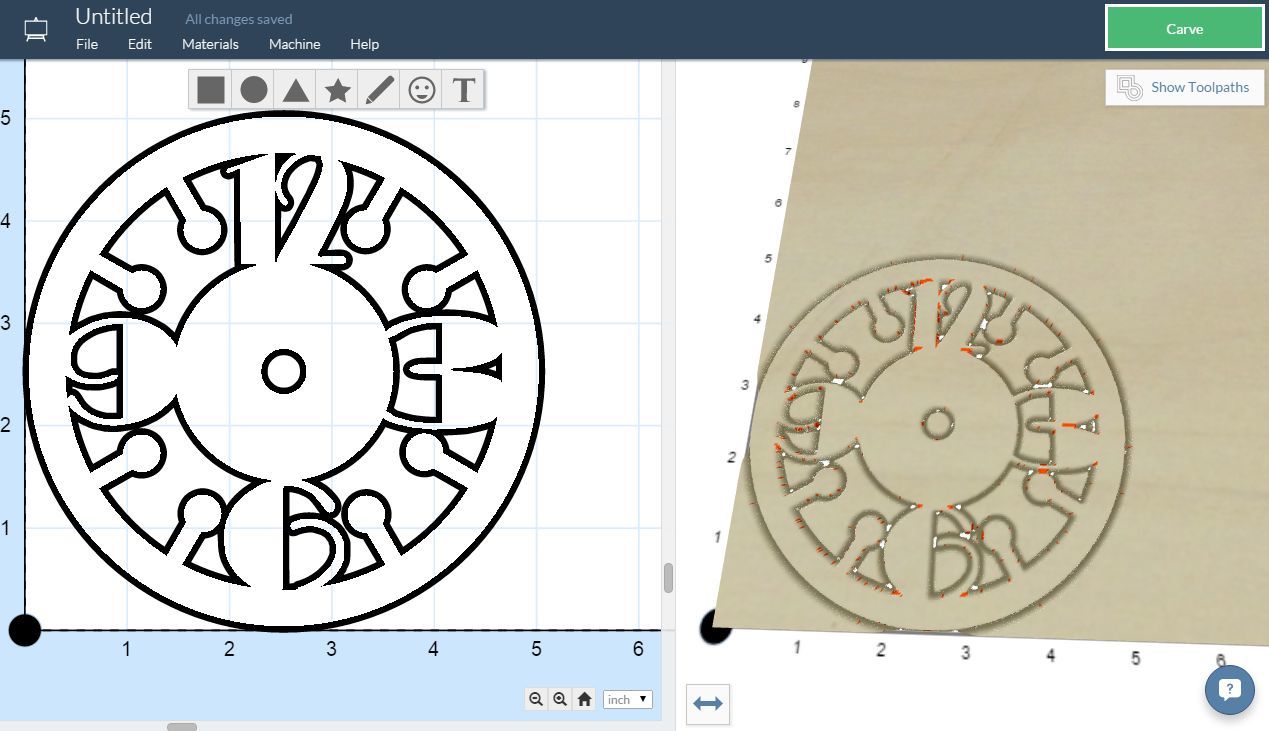 thanks for following along with this thread. how well does the X-Carve cut mdf? i did share the job but there are some problems with it. maybe scale it up and give it a try im interested in seeing the results. thanks

I had some 1/8" MDF on hand so I tried it! Keep in mind Im still a bit of a noob! So the only think I ran into a problem with is the tool path! Which I know how to fix in V Carve pro, but not in easel. The path decided to cut out the outer ring, releasing the whole project then going and cutting the last half of the 12 so you can see its a bit rough, but I did forget to use tabs so adding tabs may fix the problem. Everything else cut out great! I used a 1/16" fishtail. So here is the first run! 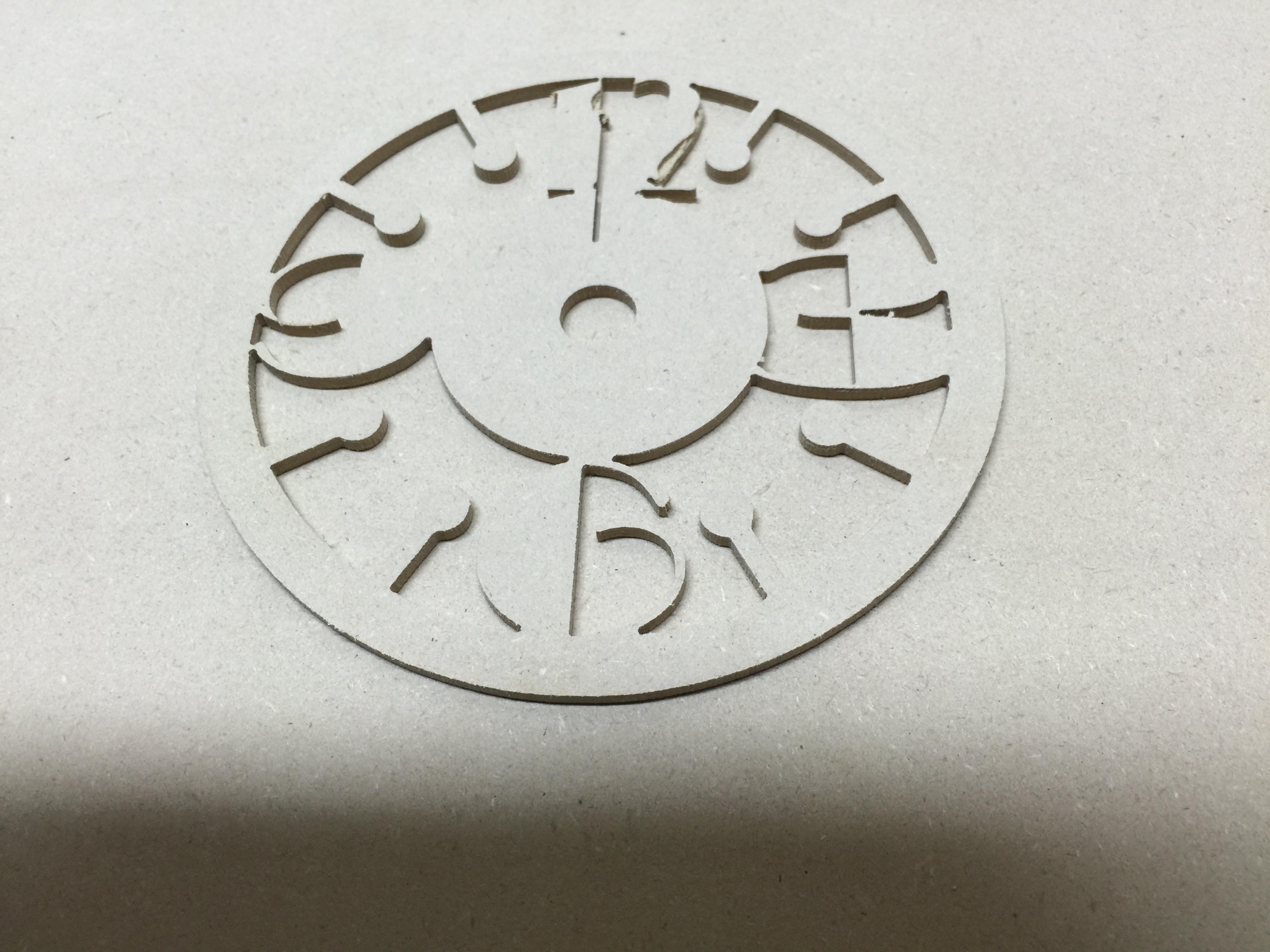 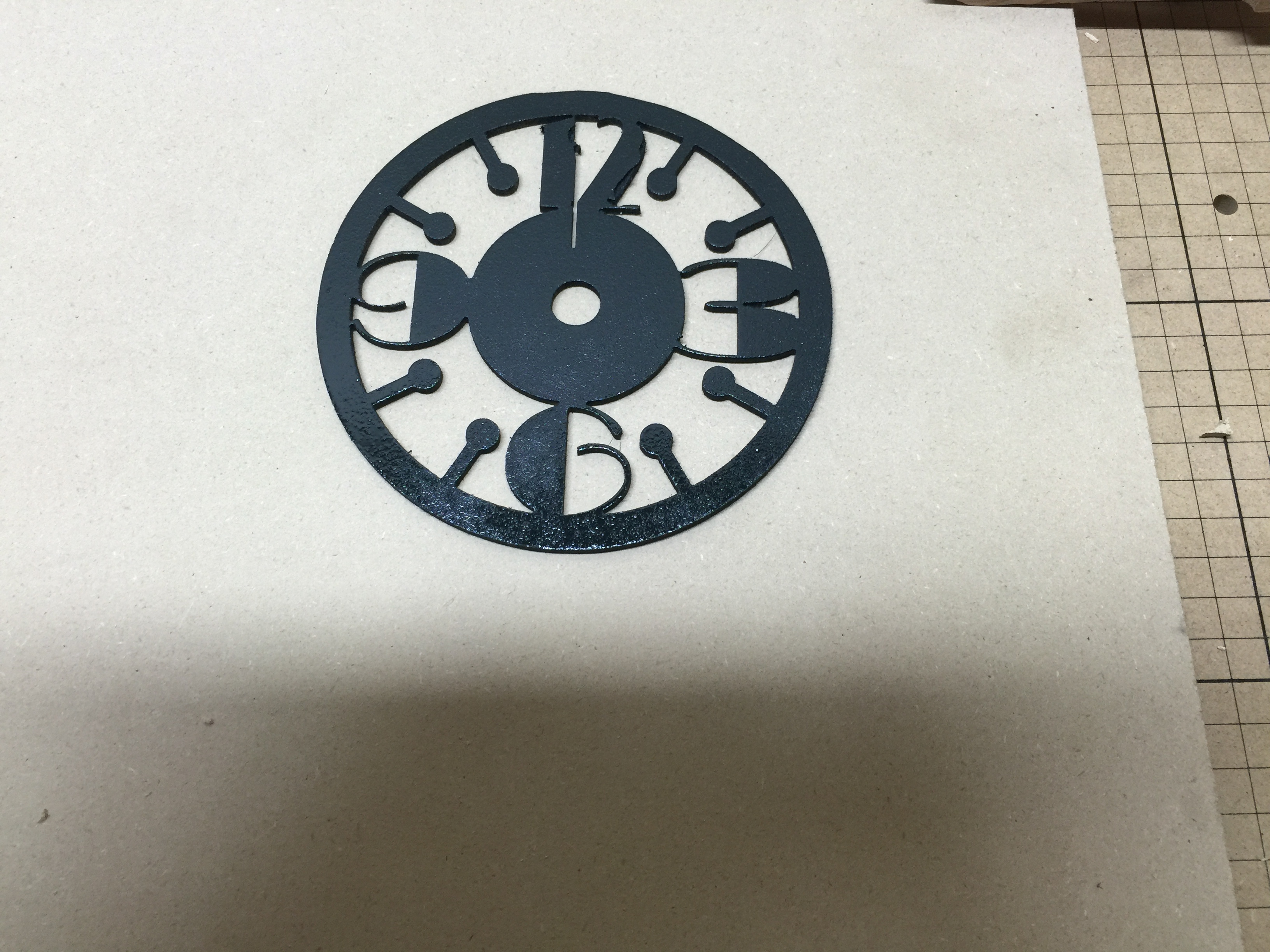 I had similar results to Thomas but no pictures as we cannot find our camera battery charger.

I would say the MDF if fine but some parts are very thin and would need sealing/use of hardner. E.g. the loops of the 9, 3 and 6. But that’s just design.

Yea they are pretty thin but I didnt seem to have any issues with them as you can see! Im going to try this again tomorrow with tabs and Im sure it will turn out fine! We will see, lol.

i figured there would be some design issues, that can be changed once i know the tricks. after seeing these results im planning on ordering the X carve this weekend. any suggestions for me before i order it? anything you wish you ordered the first time around? thanks so much for your help.