and i keep getting a syntax error -

some of the posts i have read on this forum and others suggest G2/G3 commands don’t run in Easel - other posts suggest this might not be the case. Either way i’d love to know what i’m doing wrong or why it isn’t working.

if you are using vcarve you need the post processor for Easel.
If your using another tool then you need to ask the manufacture for the proper post prot-scessor.
Vectric has the post-processor and will help you. I got mine from them.

Do a search on the forums here. There are several people who have posted theirs for various apps.
https://discuss.inventables.com/search?q=post%20processor

i’d love to know what i’m doing wrong or why it isn’t working.

Easel does not support arcs (even when just sending G-code).

thank you - that’s what i thought. i can move on.

i’m just trying to punch it in manually - to teach how gcode works to students - it would have been useful to demo an arc versus importing an svg. if i import an arc from CAD as an svg the gcode Easel creates is a monster.

we’re doing drawings - plotting things - so carving is not important.

I was referencing to his error and not using easel for creating g-code.
Easel doesn’t deal with arcs when your just importing G-code.
It just sends the g-code to the machine.

When importing SVG files and you hit the carve then Easel will create g-code.

For that purpose I would stay away from arc commands. They are not very easy to use in a manual entry setting.

Here is another good one related more to the what you want.
https://www.shapeoko.com/wiki/index.php/G-Code

in the article is says to use the I,J form

After further looking here is what you need. ( I could be wrong but this is what I understand. I have not tested this)
Gcode below: 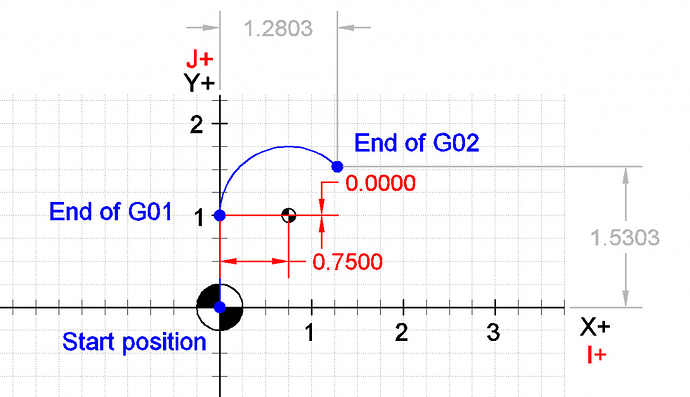 Hope this clears up the confusion.

Thank you for digging into this.

So i popped your code into an .nc file and tried to run it. came up with the same error. so i clicked on the “other” post processor button in the pop up - and it said to click on this link https://inventables.desk.com/customer/en/portal/articles/2258567-easel-g-code-spec which in turn says this

ALWAYS include a G20 or G21 depending on your coordinate system to avoid confusion.

Only linear movements are allowed (arcs must be linearized)."

So that pretty much clears it up. Arcs are not allowed in Easel.

which is a bummer coz i think it would be fun to program and bunch if arcs - my goal teaching gcode is to show that simply punching in a few lines of code can get the tool to do some interesting things. And then getting into using the import SVG option to build out more complex things and then image import and so forth.

Anyhow - thank you for digging thru all this and helping me to figure out the issue. at least when my students read the webpage telling them that arcs are a thing, i’ll know why they don’t work in Easel.

Although this has nothing to do with Easel it might be instructive information.

Using this G-code file (generated by Vcarve Pro) I did some testing using arcs in grbl.

Here are the results.