Are there any recommendations regarding 3D Touch Probes with X Carve

I’m using Fusion 360 and want to copy guitar necks with my X Carve (among other things). Ala this: http://www.rockler.com/cnc-shark-touch-probe?utm_source=google&utm_medium=cpc&utm_term=&utm_content=pla&utm_campaign=PL&sid=V9146&gclid=CJq__Y-BwMUCFdSTfgoduFkAuw

I see cheaper and much more expensive versions…not sure if it has to be compatible with Fusion 360 or X Carve machine itself, or both…?

The $300 price tag seems a little high. I’m wondering if most of that covers software costs? Mechanically it looks like just a switch that closes when it contacts a surface. I’m sure it’s a nice high-precision switch, but that price sounds kinda silly when you think of what $300 can buy these days.

I can’t think of any reason that would not work on the X-Carve, as long as you are using software that supports it.

That said, I have no experience with touch probes, and am super curious to see what others have to say!

I wish their site showed some examples of what that probe can do. The user reviews also seem pretty mixed.

I wonder if that is strictly Z-sensing, or, if it is also set up for XY. I can see that adding a lot of complexity.

If you’re still feeling DIY-ish after assembling your X-Carve, you can check out this guy’s digitizing probe

I haven’t yet received my X-Carve but a touch probe is definitely something I am interested in. And I agree that $300. is pretty steep - I see this one as being geared towards the “turn-key solution” crowd that has purchased a CNC Shark or something similar for $3000+, which includes the pre-assembled machine and software.

All that being said, this probe looks interesting as well: http://www.craftycnc.com/probe-it-wizard-mach3/ . The probe itself is $130, and he sells a Mach3 add-on for $30. There seem to be other probes floating around on eBay, etc., for even less.

I agree with @ChrisEllerby, it appears as though any of these probes can be wired to the X-Carve, but the trick is finding, or developing, the software that makes the probe useful. For the ChiliPeppr types I would imagine that some sort of “tracing” macro could be developed to work with the probe. And the software mentioned in the link works with Mach3.

The way I would want it to work is to clamp a finished part to the bed, insert the probe in the spindle, and have the “tracer” software visit each point on the piece, lowering the probe until contact is made, and recording the X,Y,Z coordinate of each point on the surface. This would then be used to calculated a toolpath which could be saved and used to duplicate the piece.

I am guessing the quality of the result would depend on how “sensitive” the probe is (does it make contact strictly in the Z direction, or when contact is made from the side), the “resolution” you used, (how many points are recorded), and the diameter of the cutter you ultimately use to cut the final piece. But I have no real-world experience with any of this.

Another solution to probing might be to take a picture of the piece and, using a grayscale image, use some software to convert it to a 3D toolpath. Or, maybe a 3D scanner …

Inventables will have a Z Touch Probe available soon.

Here is a photo of the prototype. The disk is nice and heavy so it is stable. If comes with the parts you see and has about 1 meter of high strand count super flexible cable.

Our supplier is sending the first samples this week and we should be able to start production shortly after that. We should have some in early June. 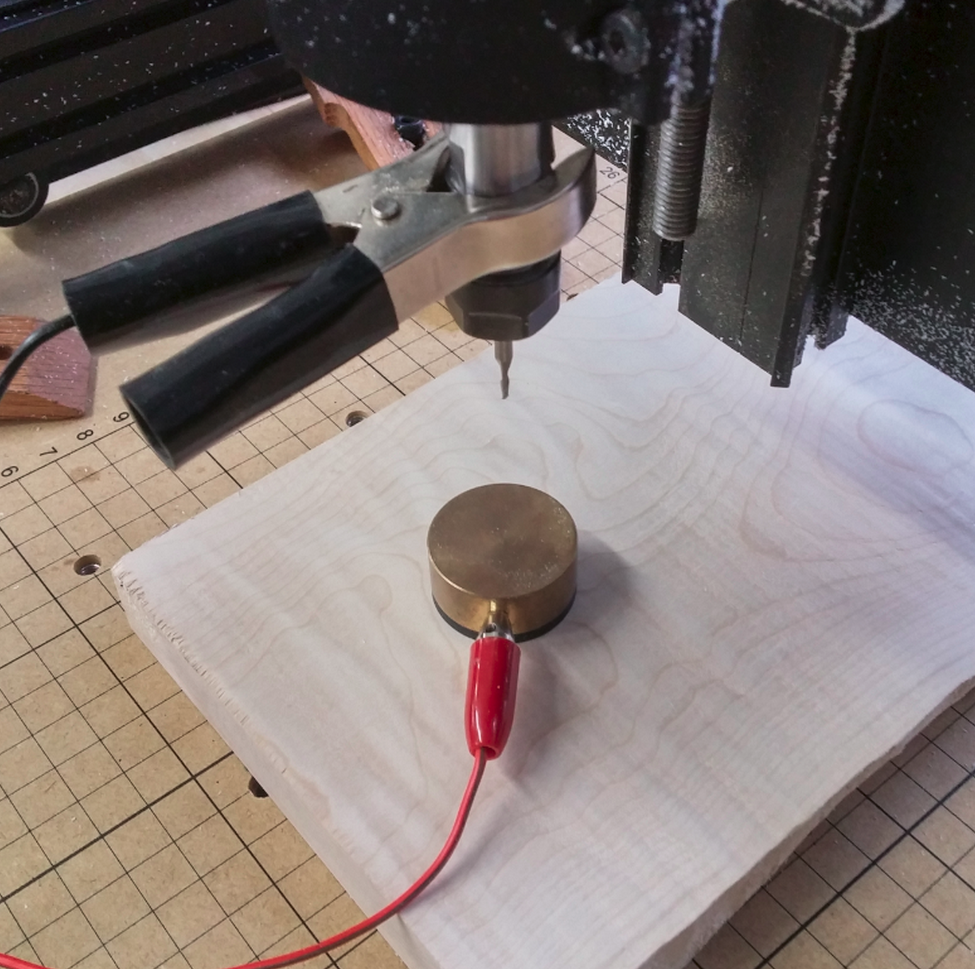 Edit: The design will be open source and released as soon as they go on sale, so you check out the design or make your own.

That’ll be a nice touchprobe for auto-homing but I think the guys above were talking about a digitizing probe for copying 3D shapes - a completely different animal? For the Rockler probe that is linked way up top, all I can say is that you need to read the reviews before you buy it, even the “positive” ones. There are four reviews and three say it doesn’t work or that it broke. My favorite review is the last one that gave it 4 of 5 stars, called it magic, while saying it stopped working correctly after a few passes, and then broke.

Oh, and the touch-probe. I’ll buy one. It will make tool-changes a lot simpler.

Please add me to the “I’ll take one as soon as it’s available, please” list.

Yes, Joe Meyer is correct, I am looking for 3d digitizing/ shape copy features on probe. Is that part of the capabilities of the probe you are soon offering?

Ours is for detecting the top of the work piece.

One of the few controllers that will so what you want aside from MACH 3 is the Planetcnc controllers. They have stand alone software and one of the major aspects is built in functionality for a 3d digital probe from making 3d models with a touch probe. The system is a bit more involved as it needs stepper drivers and such as they are not built in. But this does allow you to tailor your drivers to your steppers and to have a fully digital stepper system with DSP drivers. This is one of the few systems that will allow you to use a probe to import a 3d touch probe model and then process the data into something you can then turn around and mill out again. The system is not cheap, but it works great. It is a bit overkill for most folks but I run it on my larger mill (21X37X8) and it is very nice step up from the TINYG I run on the Shapeoko. You can also look into the touch probe from Wildhorse.http://wildhorse-innovations.com/index.php?_a=viewProd&productId=80. The thing about a touch probe is that it must be part of both the hardware system (connections) and the software system for 3d mapping.

But I am really glad to see Inventables adding the Z touch probe to their new controller and I am looking forward to seeing how it integrates with Chilipeppr.

Will it be anything like the sensor which seems to be standard on the CARVEY? . . . I only ask as I am one of the X-carve orders on your schedule to be shipped soon . . . . .

. I would love to be able to have this sensor from the beginning, but having to wait is worth it . . .

is there any idea of costs for what ever will be the end product?

Thank you, if I"m looking to build my own X Carve electronics to accommodate the Wildhorse Touch Probe, what exactly do I need? Also, I’ve been looking at smooth stepper so I can run out of a Macbook running Parallels and Mach 3 via usb … trying to learn what electronics package will work long term and be robust for Aluminum and Hardwood cutting at faster rates and with a 1.5k spindle, ideally. Am I pushing the build beyond what it’s meant for, or can I buy electronics package that will hold up longer term?.. I’d like to get the electronics right with my first order and not have to upgrade later for Touch probe ability, and more robust power.

a visual on digitizing with Planet Cnc control for others:

the Planet CnC MK 2 and Mk2/4 boards support digitizing probe. Which do you recommend for X Carve?

This answers many of my questions
http://www.planet-cnc.com/index.php?page=faq

I would look at the MK3/4 for the X Carve. Is has everything you need and still a bit of room to grow with. A MK2 would work if you wanted more outputs for things like vacuum and the like. I went with 4 Leadshine DSP drivers for my large mill (21x37x8) with dual Y ball screw drives. On the X carve you can go with some of their smaller drivers and have a great system, but they are not so cheap. The PlanetCNC drivers would work fine also. For the type of work you are doing you need to look into the 65mm 1.5KW spindle to reduce weight on the gantry instead of the heavy 80mm version. On my trip to inventables last week I checked out there R & D rig X Carve which is running a 65mm .8kw VFD spindle. It seemed to be working fine and I saw some of their milling off of it. For what you are wishing it do your tool paths and end mills are far more important than just your drivers and controller. If you can swing the DSP Leadshine drivers then I would go for them, you will love them and it will really let you do some very good tool paths with ease. But over all the PlanetCNC MK3/4 board and the Output board with relays to control the spindle from Gcode would about be all you would need on top of the drivers. That very same system could then be moved to a larger mill if you ever needed too.

Thank you for your responses, I’m looking at this spindle for x carve…overkill? http://www.ebay.com/itm/FOUR-BEARING-65MM-ER11-1-5KW-WATER-COOLED-SPINDLE-MOTOR-AND-VFD-DRIVE-INVERTER-/251032591193?pt=LH_DefaultDomain_0&hash=item3a72b55b59

wondering about the motor mount, which to use?

@Eenor We are using the same type in our shop, but 0.8kW. It seems like a good size for the X-Carve. The 1.5kW has the same diameter, but I don’t know about the weight. These things are a lot heavier than they look. We used the Dewalt 611 (coming very soon) mount, but had to wrap the spindle in (2) wraps of 0.03" styrene. It is very rigidly held. It works great. @zkaplan loves it and has tweeted about it a few times. It is nearly silent by itself. It still makes noise cutting of course.

We turn it on using the button on the VFD. We control the speed via a 5K pot. I have a Grbl PWM to 0-10V circuit breadboarded using an op-amp and a low pass filter. It functions, but we have not tested it on the the VFD yet. V_Motor is anything 10V up to the max of the op-amp (35V??) 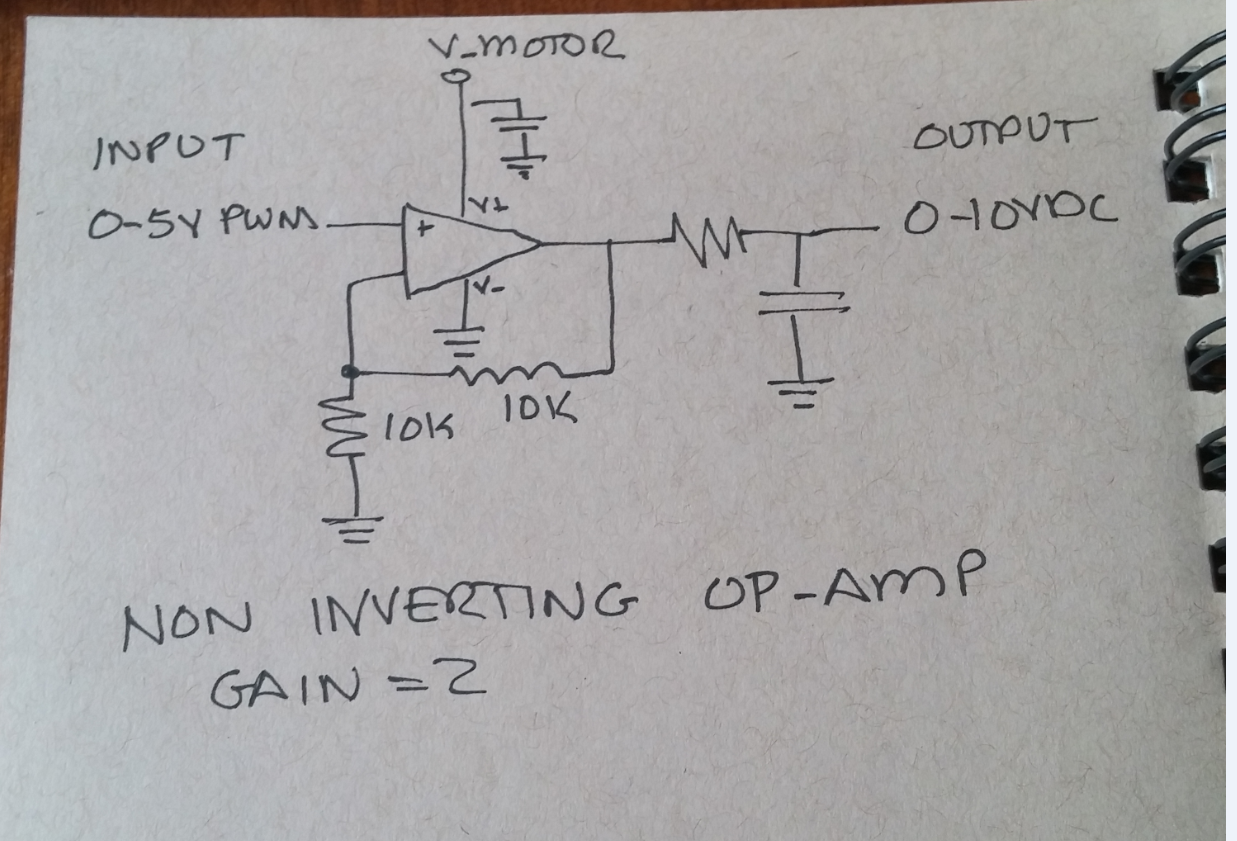 Thanks so much Bart, sounds like I should compromise with the .8 Kw spindle, dont want to be a guinea pig…although…I’m not quite tech savy enough to build your schematic, wondering if speed can be controlled via the VFD itself without wiring up a pot and breadboard? or maybe I shouldjust go with the Dewalt 611 and control its speed manually when cutting aluminum?

Thank you Travel, re: Planet CnC setup, do I buy 3 or 4 motor drivers, or…do the 2 Nema motors on Y axis share a driver and does this require the more expensive Leadshine stepper driver to accommodate extra voltage? I’m assuming the more expensive drivers have similar effect as SmoothStepper, making more precise cuts and better (quicker cleaner) toolpaths, is this their advantage? Again thanks for answering my questions.

Yes, you can totally control the spindle via the VFD. You should get a PDF of the manual for the VFD before you buy. You will need to adjust about 4-6 settings. The VFD can be a little intimidating with the hundreds of options. You might want to get comfortable with that before you buy.