Just completed the first prototype of this part for my wife, we’re planning to make up several of them. The two large pockets hold dip-pen handles, the small pockets hold nibs. When this is done, those two recesses in the back will have hinges mounted in them for a swing-down lid. The final version has a pair of pockets in the front for magnets to keep it closed, and a cutout for a hand grip for opening it as well. I’ll post photos as soon as I get that part done.

Here’s the prototype so far! 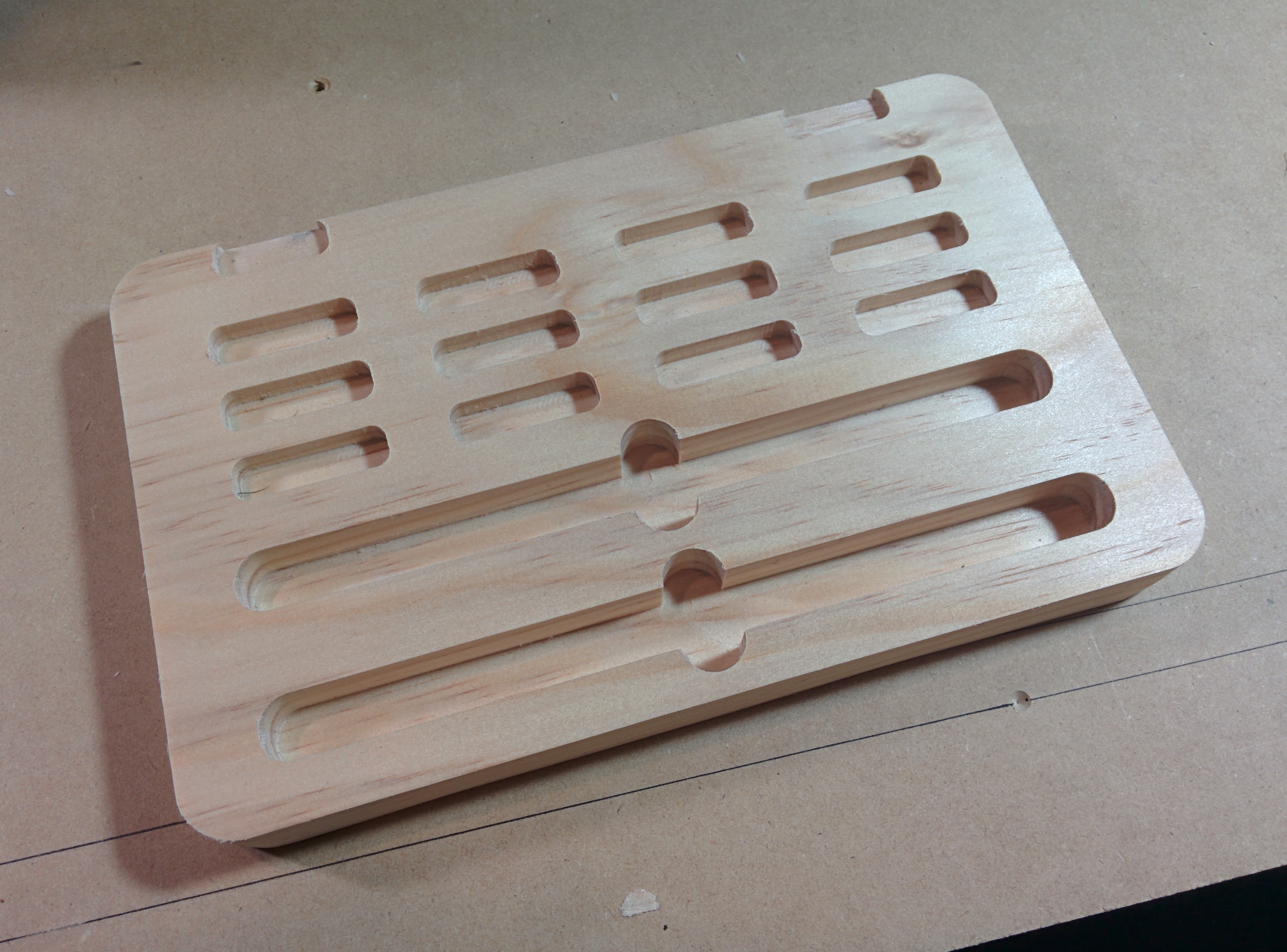 And here’s the REV-B version, REV-A prototyped the finger cutout at the front, but wasn’t quite large enough for the nibs. So, in REV-B, I removed the finger cutouts from the pen slots (they were too small to work well anyway) and changed the orientation of the nib slots. Also adjusted the hinge pockets to fit correctly, and added cutouts for the hold-closed magnets. The top will have washers in the same place, to grip the magnets.

I will be making the lid later tonight, and adding a radius to the corners of the cheap Lowes hinges to fit the pockets. 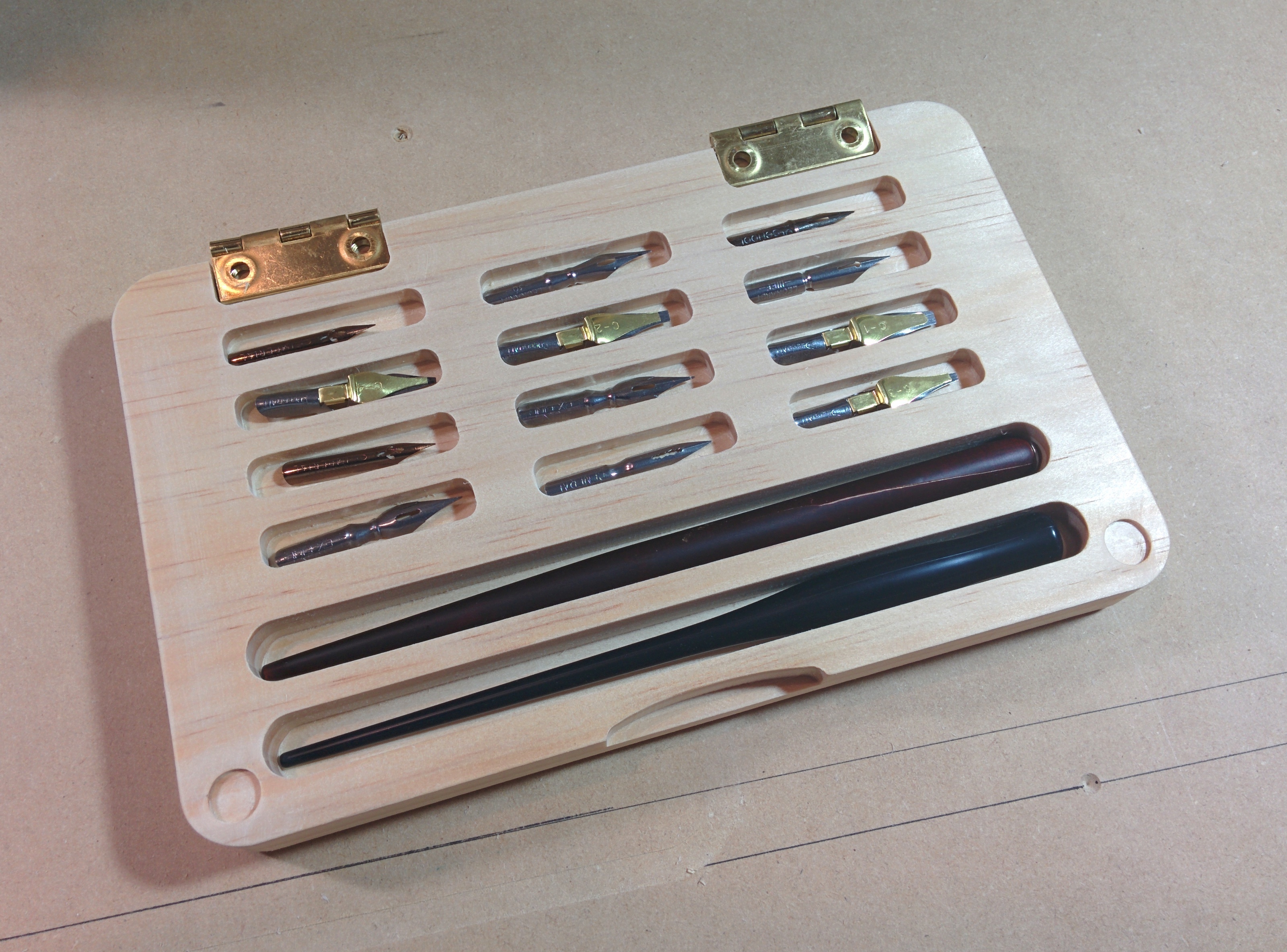 EDIT: And here’s how it looks now, with the lid in place! I think next time I’m going to split the hinge pocket between the lid and the base, but aside from that I’m pleased with how it’s coming out. I also need to drill the pockets for the washers in the lid that will stick to the magnets that are going to go in those recesses at the front of the base. 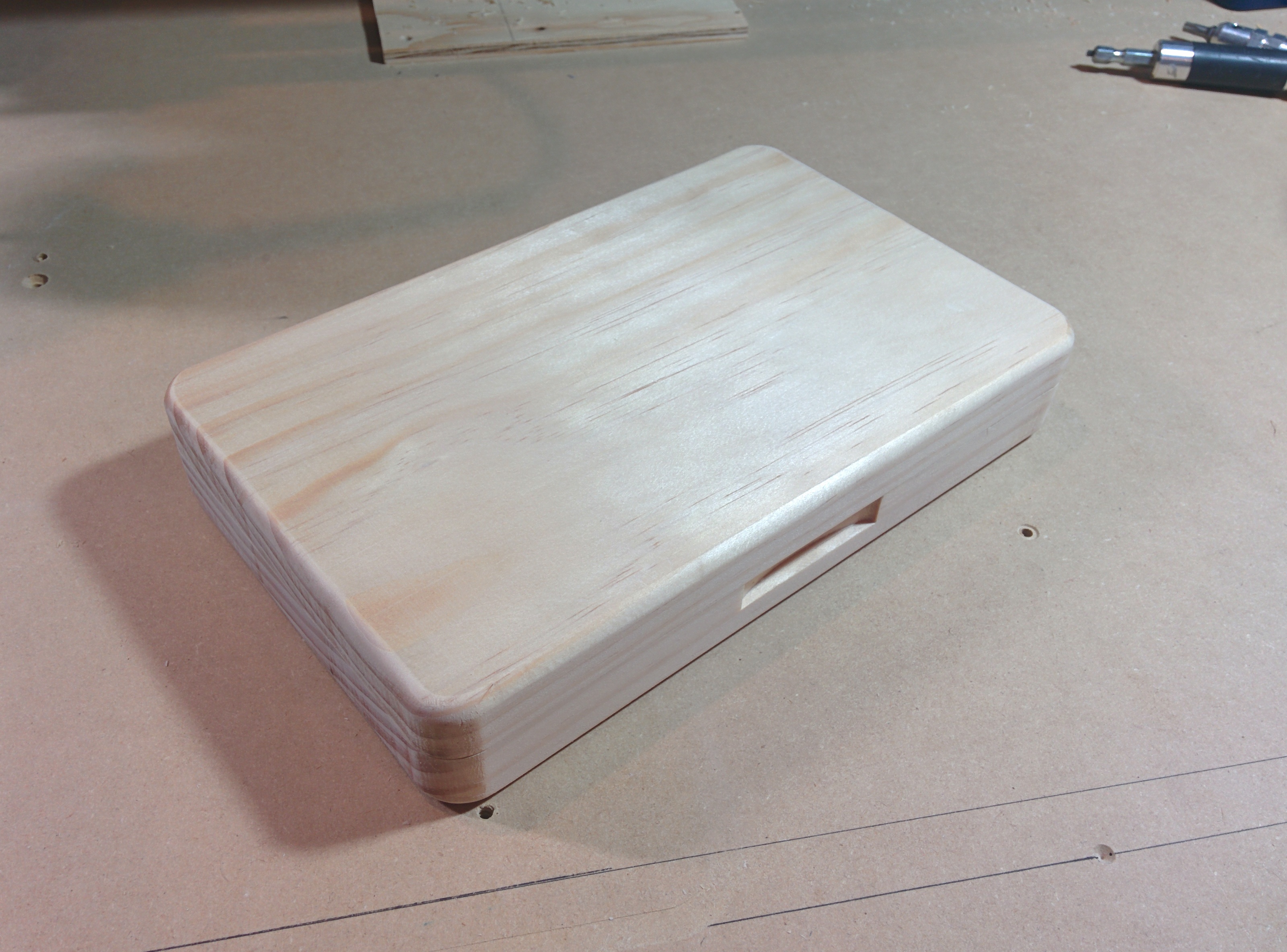 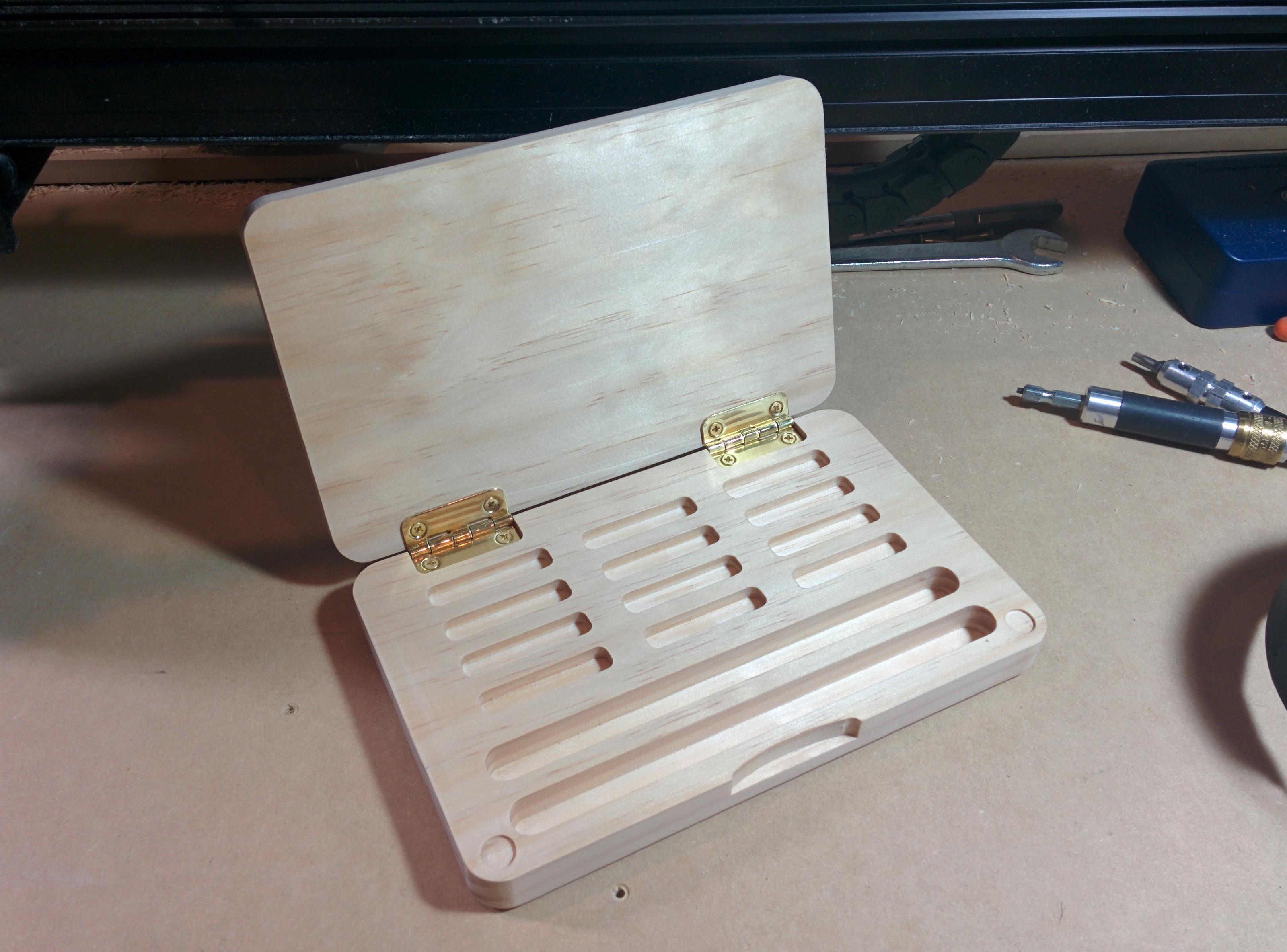 And here it is all ready for finish, with the magnets and screws (for them to stick to) installed! 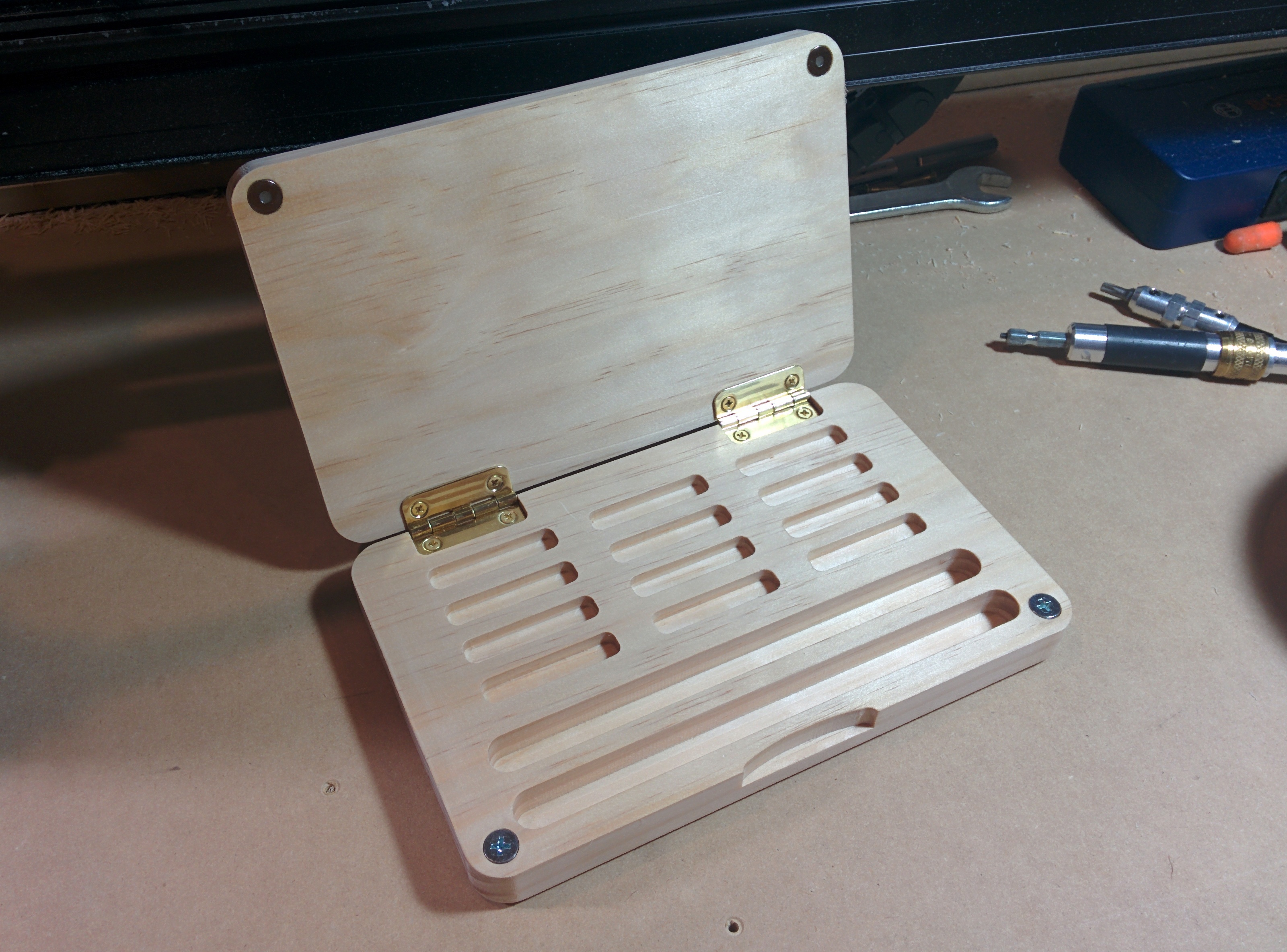 I could totally see another large pocket carved in the lid with a stretch band across it to hold blotter paper.

Thanks! I was actually considering that, but I need that flat face to hold the nibs securely in their pockets. I’ve been working on figuring that one out, I’m thinking that I might end up in the next version dropping the entire set of nib pockets down about an eighth of an inch, and adding a SECOND lid inside the first that hinges up to expose the nib pockets. Then I could have a pocket in the lid to put paper in, and use an elastic band as you said to keep it in place.

And some updates! I’ve produced two more versions since the last posting, removing four of the nib holders and adding three pockets for standard-sized ink vials. Version 4 was a simple correction of some of Version 3’s shortcomings, and V5 tomorrow will fix a couple bloopers in V4, mostly related to the hinges. 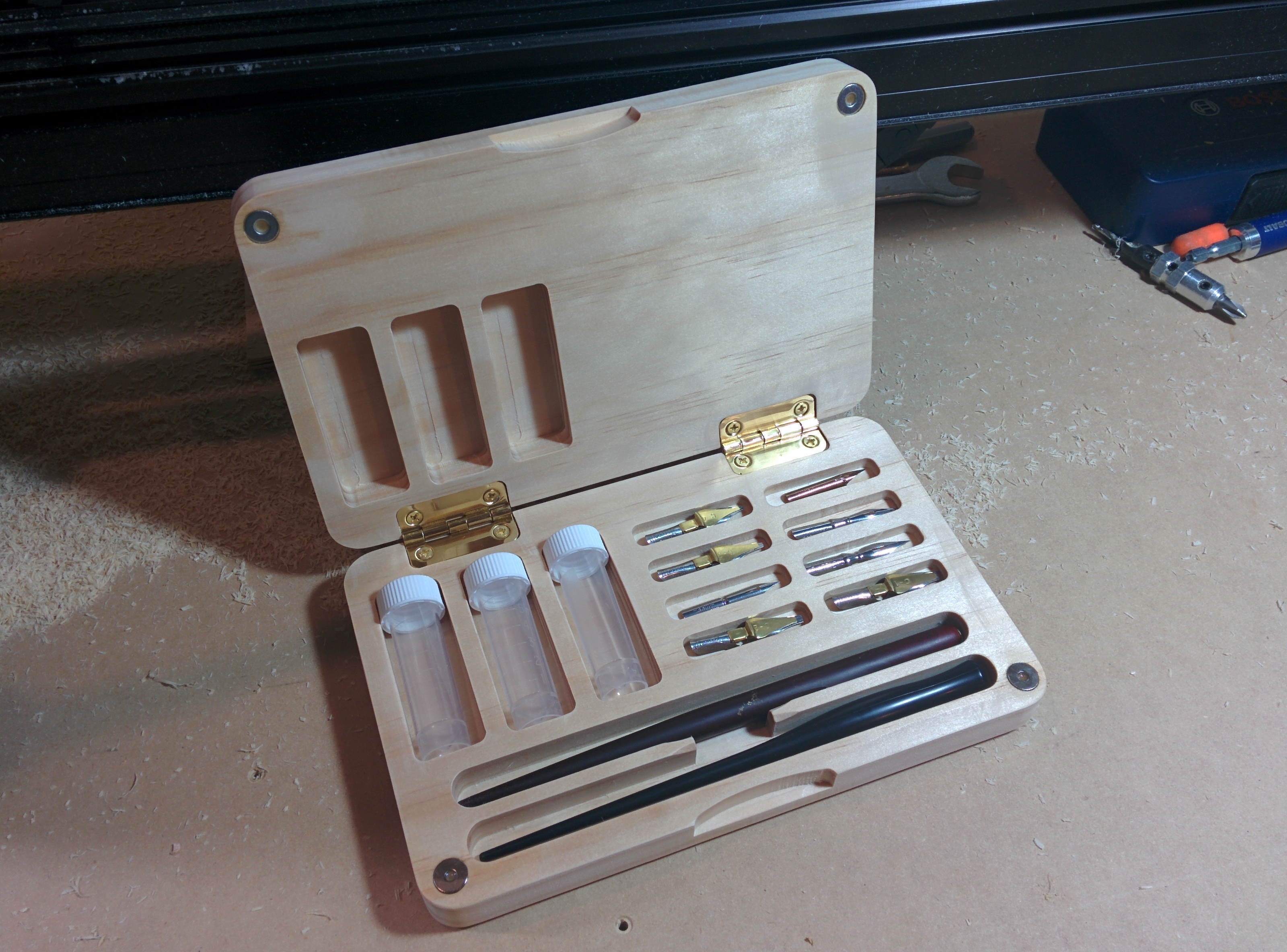 And here’s V4, just finished with epoxy cure about an hour ago. The hinges aren’t quite properly aligned (when I went to the smaller ones, I forgot to reduce the depth of the hinge pocket when I reduced the width) so I had to plane off a lot of the inside of the lid. That left the hinges sitting proud, and not quite right. I’ve fixed that for V5, it should go back to having the hinges neatly split between top and bottom. 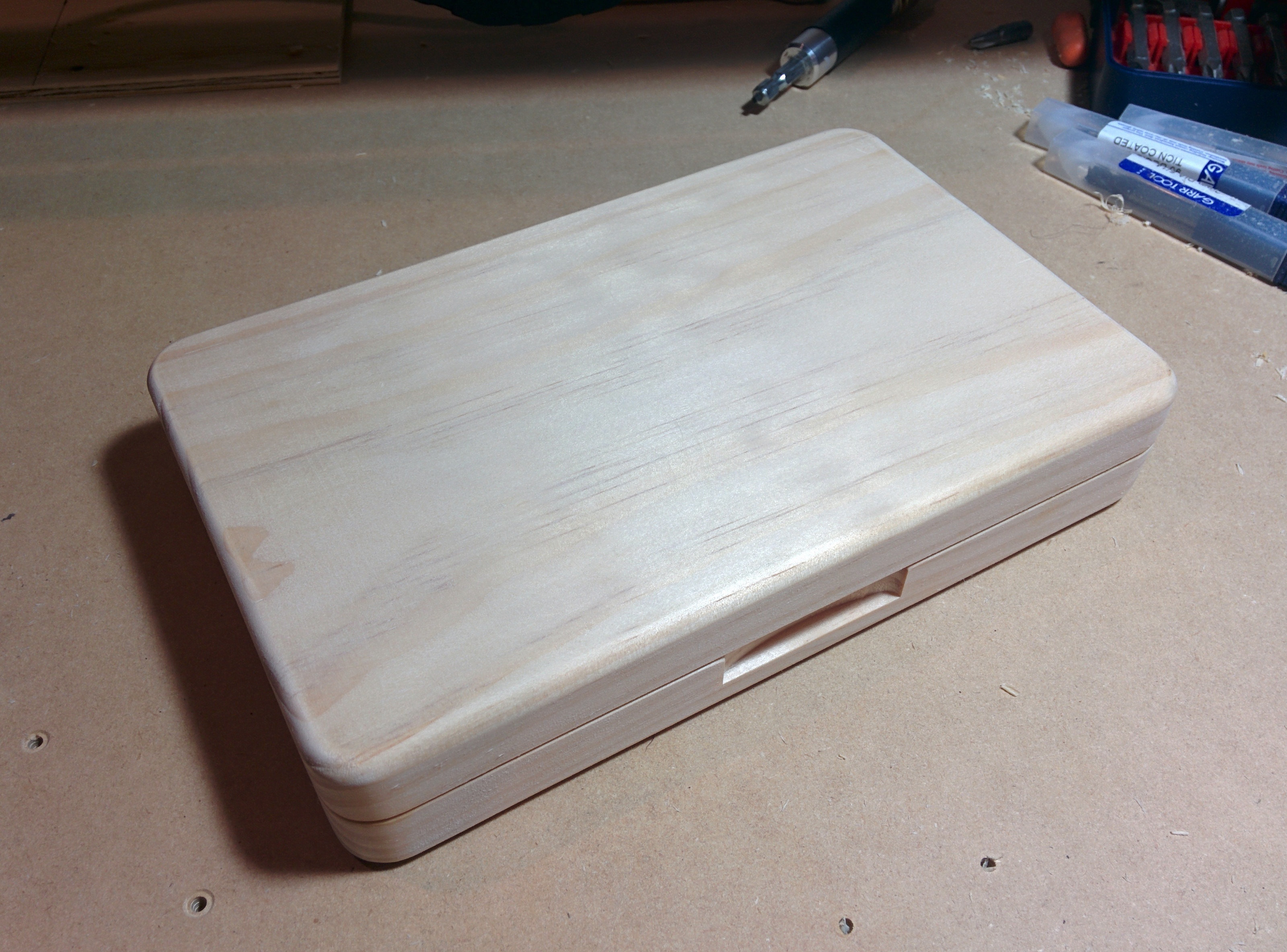 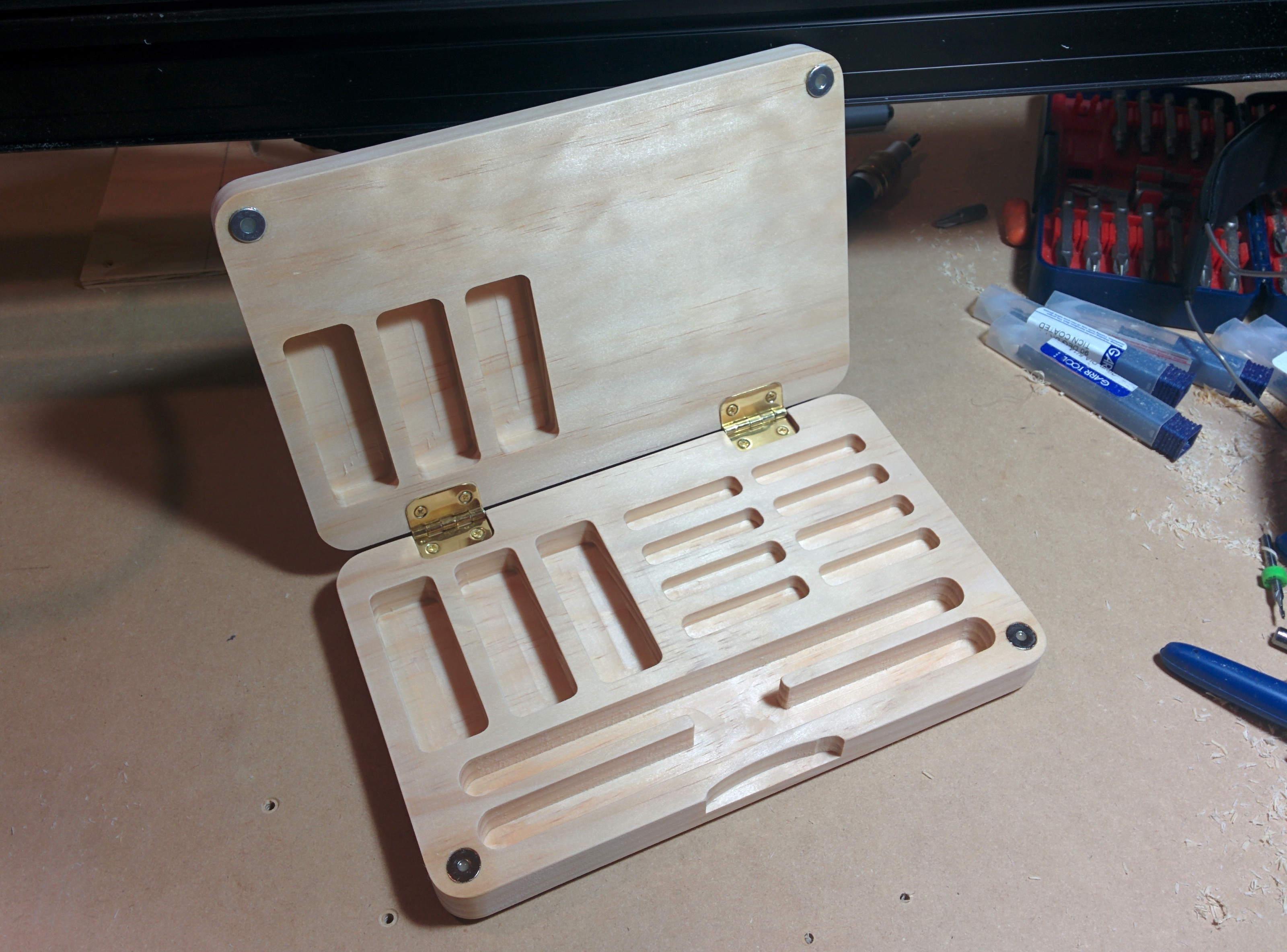 Nice! I love seeing the progress and iteration.

Definitely shows off the capabilities of CNC with pockets on top and bottom and precise magnet pockets that align with ease.

I think being able to rapidly iterate like this is perhaps what I’m enjoying most about this. It’s almost a flow-of-idea type process, I just think up some changes I want to make to the design, and a few minutes later the new one is taking shape. Adding the DeWalt made it a whole new machine, this would have been a pain on the stock spindle. Doable, but a pain.

The matching pockets are one of my favourite capabilities here, particularly the hinges!

A good example of working smarter and not harder. Keep up the great work.

And here’s the first photo of V5. This is the first “production class” version, the toolpaths have been optimized, and the fit is very good on all components. The lid fit perfectly and required only very, very light sanding at the edges to make everything line up as planned. This is also the first iteration I’ve made in cherry, instead of the pine prototypes. It is shown here just after sanding, the hinges have been fitted then removed again for finish. It’s currently sitting in the shop, with the first coat of semi-gloss polyurethane curing on it. The additional three holes in the lid are sized so that the vials of ink can be set upright in the lid and held there as ink wells while writing, that is courtesy of a suggestion from a fellow over on the FPN forums. 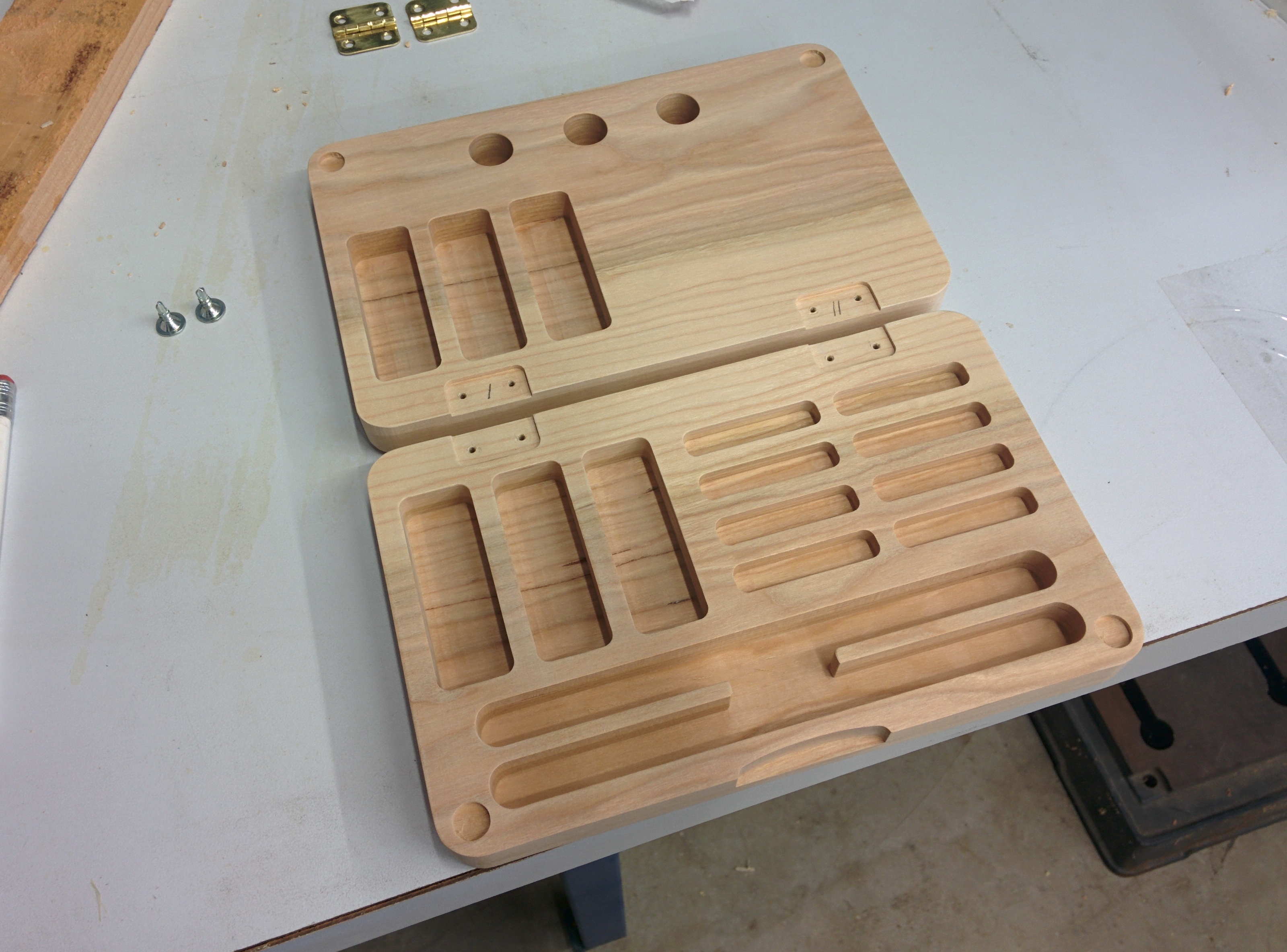 And V5 complete! I think this is going to be the “production” version. I’ve made a slight change for some future versions on the magnetic closure hardware for easier installation and a tad better look, but overall I think this is “it.” Man, this has been a fun project! 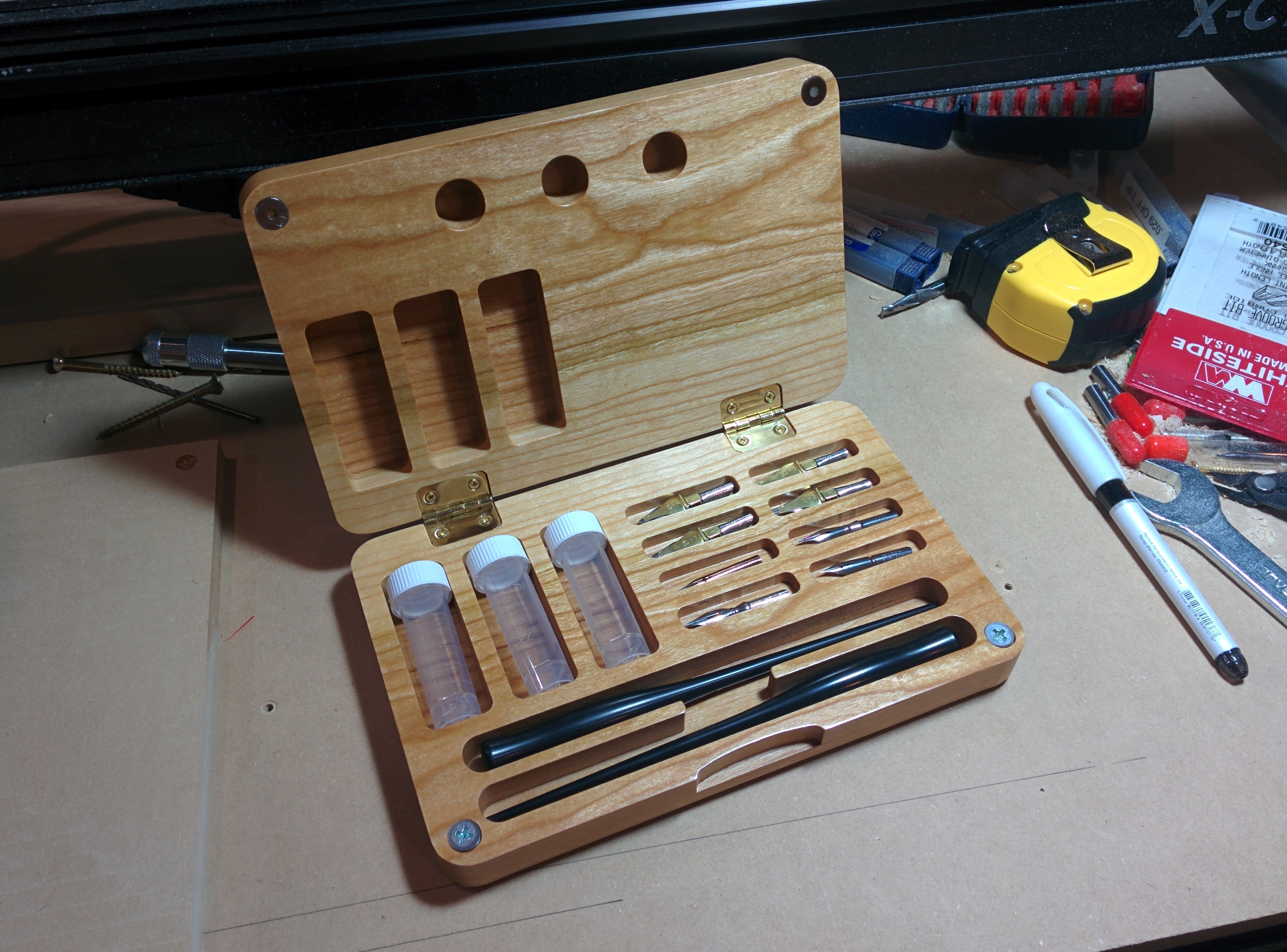 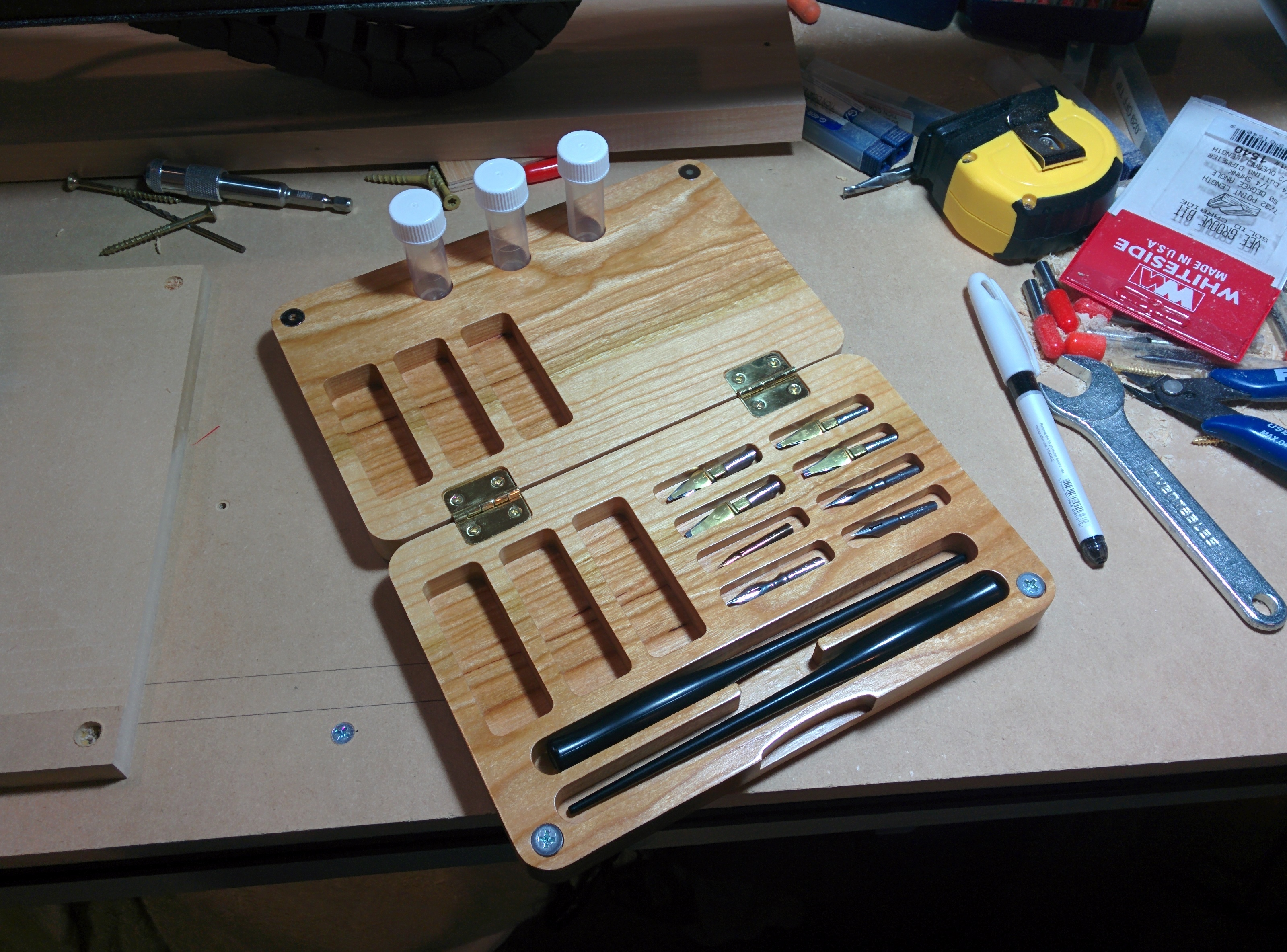 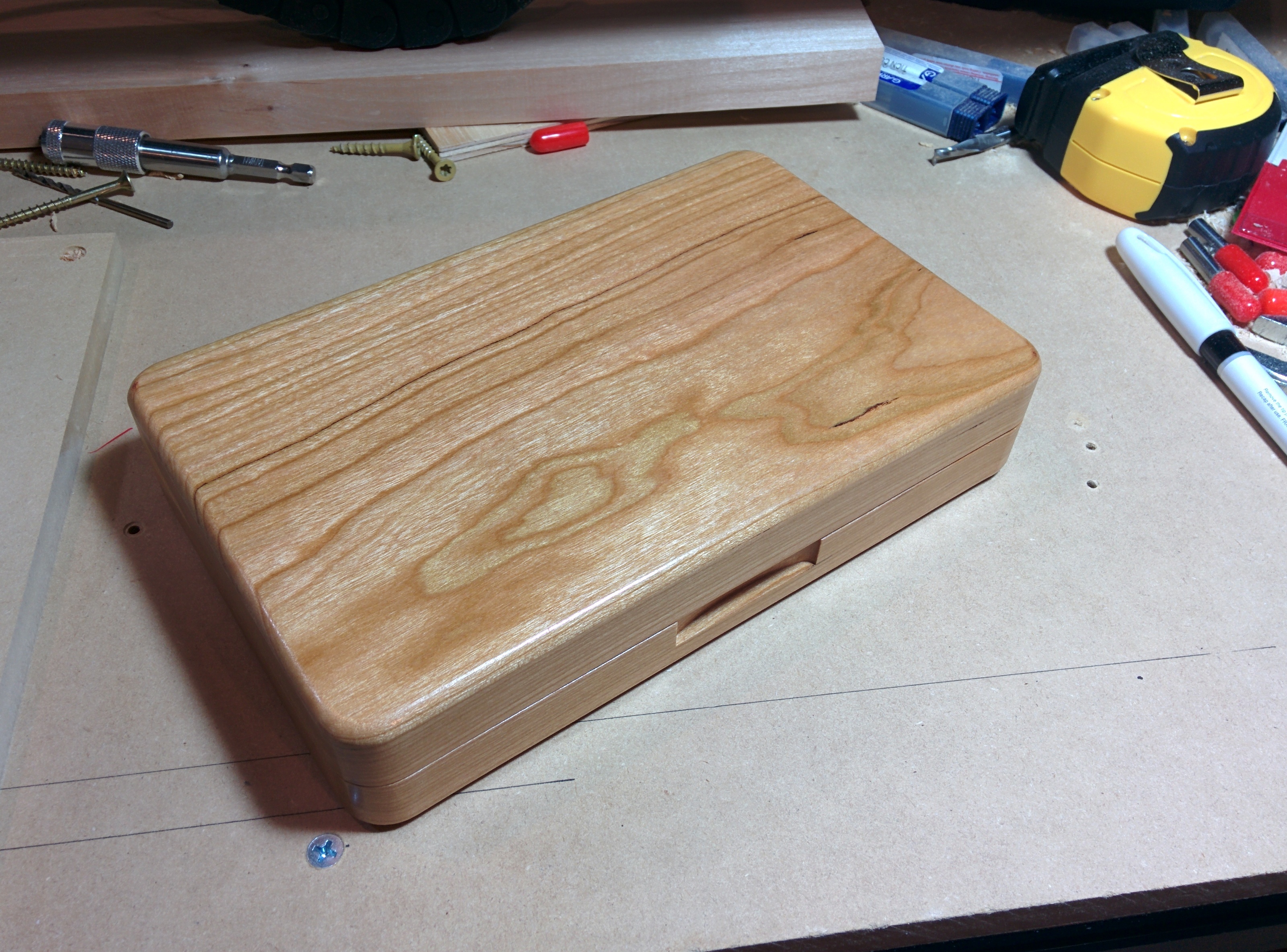 Absolutely beautiful. Now you need a nice V-Carve on the top

I’ve thought of a couple things that’d be fun to carve on the lid! At this point, I think I actually just like the rather stark simplicity of it.