Assembling my very old Shapeoko2 with upgrades to Xcarve

I’m not sure if this is the right place or not, but I will throw it out here.

I originally purchased a 500mm ShapeOko 2 in something like 2014. The original design’s Z-axis did not work well, it was designed to mount a Dremel as as spindle. I never really got the machine running in a usable manner and it sat on a shelf. X/Y was OK but Z was terrible, I was running it with a TinyG controller, the original kit had no electronics. That was a long time ago. In the meantime, ShapeOko went it’s way and my unit became an ‘X-Carve’.

In 2015 ordered an X-carve upgrade for it which included the upgraded Z-Axis (the ACME screw / V-wheels Z-Axis), new plates for most of the machine, a y-Axis Gantry extrusion, and I added a Dewalt 611 mount. I never got around to installing these and it sat on the shelf some more. I did dis-assemble it intending to build it with the new parts but never got to it.

In 2017 I ordered some bigger stepper motors. Never did anything with those either.

Finally in 2022, I decided to put this thing together. I put it all together using the parts I had and realized how much work was going to be involved in wiring it up so I decided to upgrade it to 1000mm before I did that. I ordered new extrusions for the X and Y to increase it’s size to 1000mm.

The assembly has gone pretty well and the machine is almost ready to make initial cuts with the new Dewalt 611 I got for it. I’m still powering it with a TinyG controller and using Universal GCode sender to drive it. I’m playing with a couple of different software packages to create GCode for it.

My machine is somewhat unique with it’s TinyG controller. I have put limit switches on both ends of the X and Y axis since the TinyG supports that. I’ll be building my own wasteboard setup similar to the modular system that inventables sells as a kit. I built/welded a metal rolling table to put the whole thing on so the machine can be rolled around as needed.

The only real issue I’ve got is some kind of wobble in the ACME screw on the Z-Axis, the entire router mount wobbles around as the ACME screw turns. I’ve checked the screw and the machined portion that the bearing rides on is not true to the rest of the screw, the machining just wasn’t good, is this typical or is my old 2015 upgrade just not made as well as the newer ones?

If there’s interest I’ll post some photos of my somewhat unique X-Carve based machine.

Can you post images and possibly a video of the setup and what it is doing?

I took a video but it doesn’t really show the issue very well. The issue is that the ACME screw has a shoulder machined onto it and is threaded for a nut. When I tighten the nut, the rest of the screw is at a slight angle to the bearing it rides in so it wobbles around. Without the router and the threaded plastic nut mounted, the bottom of the shaft rotates around about an eighth inch circle.

Mounting the router slide plate and threading the nut onto the ACME screw causes the whole mount to try to wobble around and it also binds as the shaft is turned and tries to flex/bend. It’s just the same as if the shaft was bent, but it isn’t bent it was a brand new shaft (in 2015) that I never ran until now.

The question is, is this a common issue are the shafts from Inventables usually true or is it common for them to be machined poorly? I’m trying to decide if I should order another one from them or get some ACME threaded stock and machine it myself.

I took another video that shows it pretty well.

The vwheels, if adjusted properly, should hold it rigid enough to make that amount of wobble a non-issue.

I’ve made them as tight as I can, if I tighten them any more I can’t turn the lead screw by hand and the motor struggles and misses steps as well. It will turn a certain range but binds up for a portion of the rotation. The bit is wobbling around visibly and cuts are wider than the bit by quite a bit as they are wallowed out by the wobble.

Here is an overall pic of the sort of ‘hodgepodge’ setup I’ve got from the old Shapeoko 2 and various upgrades. 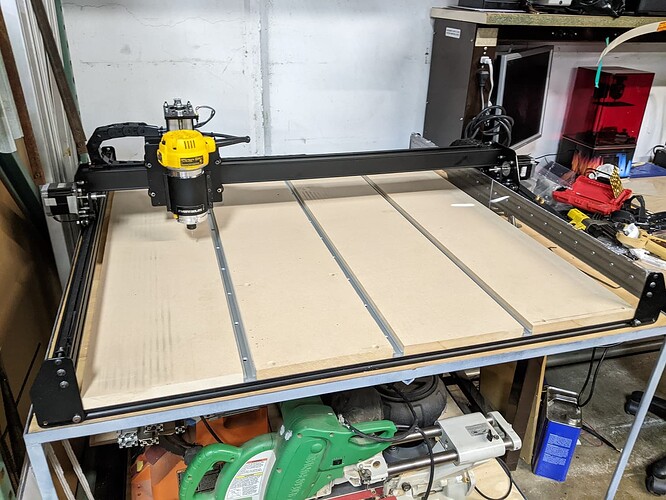 I’m making a modular waste board setup myself with t-track, MDF and 2020 extrusions. The first part I’ve cut with it are the size plates out of PolyCarbonate, even though I don’t have the upgraded Z-Axis, I figured why not add some stiffness to the rails that way.