For this project I only mill in Alca 5 tool plate ( http://www.alutrade.se/alca-5-2/?lang=en ). It is face milled from the factory to within +/- .005” which is one of the main reasons I use it. 6061 t6 plate has a far looser spec for flatness and is very hit and miss for how flat a given piece of stock will be. The 5083 alloy in Alca 5 is also great for anodizing after milling due to a far smaller pore size in the cast plate over the typical 7000 series cast plate like Mic 6 which is very hit and miss for anodizing and often needs a nitric acid dip to remove the sulfuric acid molecules from the larger pore structure so they do not contaminate the anodize dye and cause it to either fade over time or produce black spots with the anodize layer. 6061 T6 is very easy to anodize and works very well for may projects. But since this is the mount for a 3D printing head, I needed it as flat as I could get it from the start so I went with the 5083 tool plate. It mills great and is very easy to surface prep for anodizing after milling.

I have done face milling on the 6061 I have used before. Doing it on the X Carve style mills is not hard, but the mill must be perfectly square and the tram must also be perfect or there will be a small step in your passes. The X Carve and the Shapeoko are very difficult to get a perfectly level tram on. I spoke to Bart about that when I visited the Inventables offices in hope the X Carve was improved over the Shapeoko in that area but he confirmed it is still the same setup in that regard for calibration. It takes a great deal of work to get it level with the weight of the .8KW spindle but it is doable with effort. I have done it with a 1/4 flat end mill and also with some success with a fly cutter. I also have a large flat bottom cutting 1/2" end mill i sue to face my sacrificial waste boards. Once I order another in I will give the old one a try on Aluminum and see how it does as a face mill.

I am running the 1000mm x-carve defult board but put on the DW611. still waiting a collet nut and collet upgrade from www.precisebits.com. still deciding on how I am going to setup my work bed… have started a full size vacuum plate ( buddy is doing that on his HAAS at work.
I don’t plan on doing aluminum myself ( well maybe

) but I have seen a lot of these threads here and at a few other sites and folks seem to hold onto those settings like they are car setups in Iracing. Figured I would get the question and answer session going… But that was a great bit of info. thanks.

@Travelphotog So I got the 800w WC spindle up and running. Holy crap what an improvement over the DW660. As a fellow anodizer I took the liberty of customizing the dewalt spindle mount that I used (this was just after a test cut so there is a lot of sticky, greasy aluminum chips stuck to it). 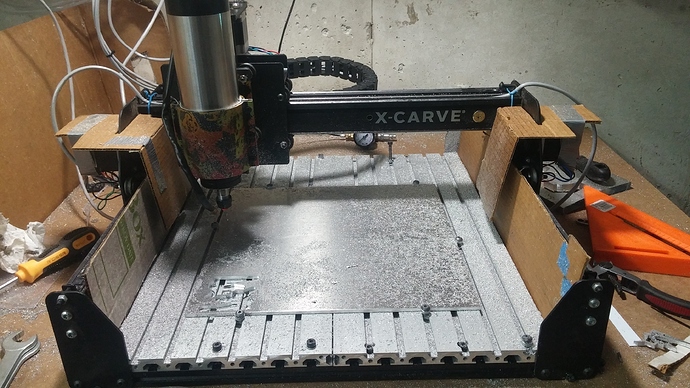 But yeah, overall the quality of the parts compared to the previous spindle are an order of magnitude better. Before I would have to spend probably 3-5minutes filing everything down to make it smooth (for the sake of mechanical operation of the part), but those 2 test triggers I made just needed a bit of de-burring and they were golden. Really happy so far, need to do more testing tomorrow. And I need to custom anodize more parts of the machine

@EricDobroveanu Man I total forgot you anodize also! Too many folks to keep up with on here and that slipped my mind. Are you milling from 1/4" plate? You should REALLY give the 5083 tool plate a try if you are. It anodizes and mills like a dream. You might neverr touch 6061 again!

The VFD spindles are really nice and I wish more guys would give them a try over the Dewalts. Just on noise alone they are worth it. Glad to see you got yours up and running. Did you go with a closed loop cooling system or just a large bucket?

@Travelphotog Us anodizers are a rare breed, we gotta stick together, haha! The largest plate I cut is .19", but typically I cut .16" or .125". I have cut .5" before though in an attempt to make a spindle mount, but that didn’t turn out so good. Looking around online for prices, I can’t seem to find 5083 alloy. Whats the price difference like? I don’t really need something super strong for my parts, though (not sure how much tougher 5083 is to 6061). I’ve found that anodizing 6061 is a dream when its fresh/new though, but I do nitric dip everything anyways, though. Usually make about .65mil of anodize, I find going higher than .75 or so will make 6061 “bronze”, not a problem if its going to be black, but if you want white, its a huge problem.

For the cooling, I ended up using a 5gallon bucket with a few holes drilled in the lid. I have a bunch of PC watercooling parts lying around (radiator, old pump, reservoir, barbs, etc) but since the spindle doesn’t use G1/4 threads its tough to connect everything. I could use some adapters but I’m not sure how my (5 years old, at this point) pump would fare. I looked into some modular AIO units but the ones I would get are $150+, too much. The bucket setup cost me ~$40 for everything (except the silver quarters i threw in there to prevent algae) which was acceptable. The only problem is that the pond pump I bought is really really weak. I had the pump under the table the x-carve is on but it couldn’t push the water all the way through the spindle and make the return trip. I ended up having to raise the bucket almost to the same height as the xcarve to get it to fully cycle properly. I guess thats what I get for buying from home depot, haha.

@EricDobroveanu & @Travelphotog
I noticed you both have aluminum extrusion custom base boards. Would either of you care to share where you found them? I looked on 8020.net and the only thing they had close would have taken 13 strips to get to the 1000 mm sized board.

I ask because I just got my X-Carve assembled and was very disappointed that the waste board is not true to the gantry. I have a high point at X0 Y0 but as I move away from there there is at least a .05" difference over 10" in both directions. That’s a considerable amount by any CNC standard. I have read in several places in the forums where others have the same exact high point, and the only solution is to pocket out sacrificial boards. That would be rather expensive over the long haul, in time and material, since I bought this to produce items for sale in the minimal time I have after my regular job. So I am looking for something that will not warp and that I can trust to be true every time I go to use the machine.

Any other affordable upgrade suggestions would be welcome also, i.e. where to find a better spindle, controller, etc. I am very familiar with CNC machines from college and work, but I am rather new to home based DIY CNC machining. I thought I had read enough to understand most of it, but I now see that I didn’t know the right questions to look up. This is a great learning experience.

Anyway, I look forward to your answers!

This is where I found out about them:

Hmm cheaper than the 8020 option for sure. Thanks for the info!

No problem, I’m loving these extrusions, I feel like they really stiffen things up.

That is the same one i used though I had them from the days of the Shapeoko 2. They work great! I suggest tapping the holes on the end to M5 (with a GOOD CNC tap like this: http://www.ebay.com/itm/M5-x-8-D4-3-Flute-Spiral-Point-Plug-HSS-EX-TiCn-ANSI-CNC-Combo-Tap-YG-1-T3284C-/151083162393?hash=item232d421b19:g:~c4AAOxyHE5RpjTv and not some cheap hand tap.) Then either mill or 3d print a plate to lock it in fro the tapped holes and the extrusion span on the front and back of the mill. You will also need a few M5 8mm screws and some M5 drop in T nuts. Works like a charm and no drilling of your nice mill bed to mount it.

C’mon, live on the edge!

TiALN COATED. USE TO CUT A M5 OR LARGER THREAD.45-1.00mm PITCH. POLISHED SHANK. NECKED TO THREAD. 380" DEEP. HIGH PERFORMANCE THREAD MILLS. Our thread. Made in USA. WITHOUT THE HIGH PRICE.

I’ve already bought a 10-32 version of the above and have cut threads with success. Still a bit nervous about cutting real threads on real parts. Might save me a load of time though if I can nail down the tool paths.

I have been looking into the same thing as I have had to ramp up production to the point where even with a tap head, the tapping is taking too much time to keep with with demand. I think in the next week or so I will switch over to thread milling on everything I do also. Trying to tap 200+ holes a week in 3 sizes is not fun at all. Will also be very helpful in the custom RC parts I am starting to make. Talk about lots of threaded holes! What did you use for CAM? HSMxpress does it so will stick with that so far as it is dead easy to so. But never fun to watch an expensive end mill go in for the first cut as you hope you programmed everything right.

Good old fusion 360 for me. It also does everything. Just add your thread size, select the hole, set the pitch and tell it how many passes to make (i usually do 3, but 2 the is “recommended” number).

Its not hard. You can just drill the hole to be the minor diameter, then bore with a thread mill to the major diameter at a given pitch. For example, a 10-32 thread would have a 1/32 pitch (.0313) and you can set a number of passes at a given width of cut.

I think theres also an actual thread milling setting somewhere, but its not really necessary.

Nice to hear we have options on software that will cut threads. Where do you get your thread mills and which sizes do you find most useful?

The link a few posts back is where I got mine. I didn’t buy the M5 one in that link, rather the #10 version, since I have to tap american threads.

HI Travelphotog what is the part that you are making?

It is a hot end mount for a delta 3D printer. You can see more info about it at my site http://713maker.com/