I am working on an idea for St. Patrics Day.
I made ups some coasters out of bamboo flooring.

First I carved a large pocket with a 1/4" end mill to skim off the flooring. Taking off the varnish and evening out the ridges, so I would have the clean “ring” edge.
Then I carved the inner pocket. A basic pocket operation with a profile carve at the end to clean up the edge. (this is an option in vcarve)

I switched to a 1/4" tapered ball nose and carved the inverted 3D image.

I then switched to a 1/8" ball nose bit and profile carved (on line) the clovers, as well as profile carved (inside) the inner pocket, to give a shallow ring on the edge to help collect condensation.

I also used the ball nose to cut out the outer perimeter with tabs. 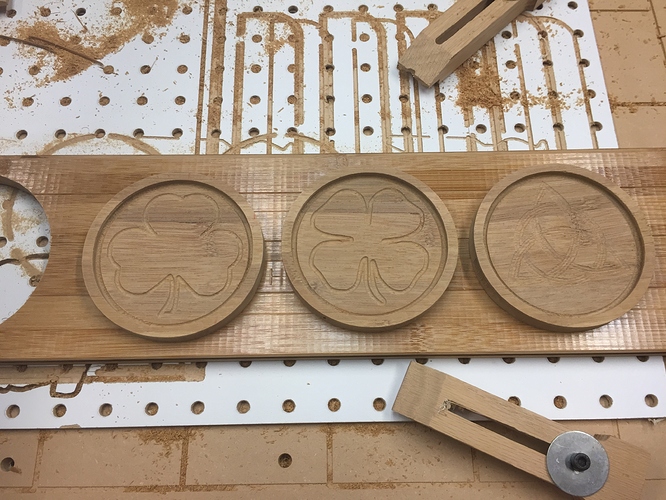 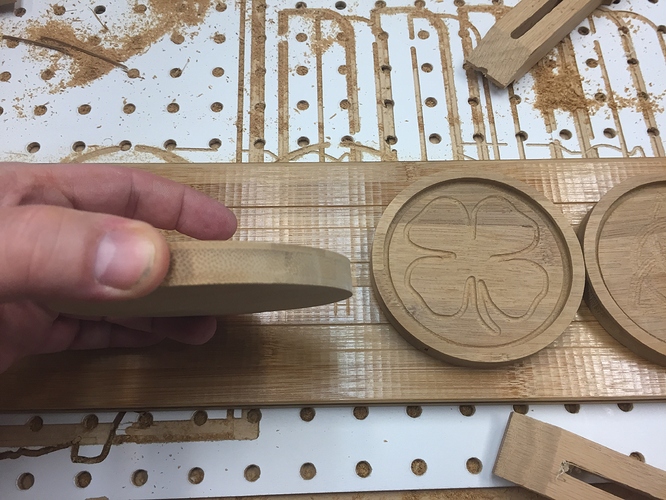 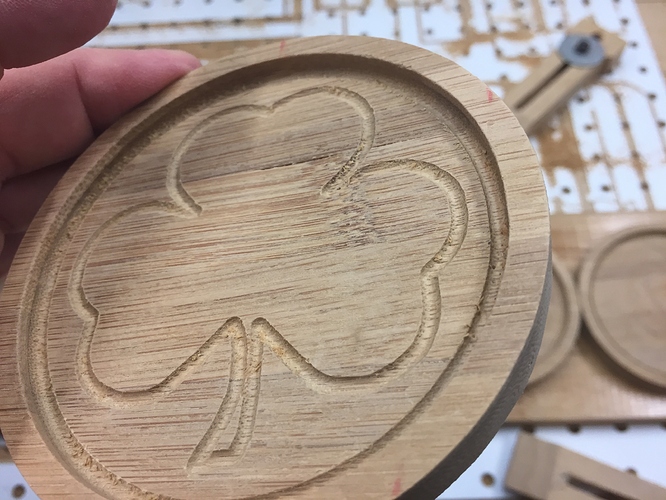 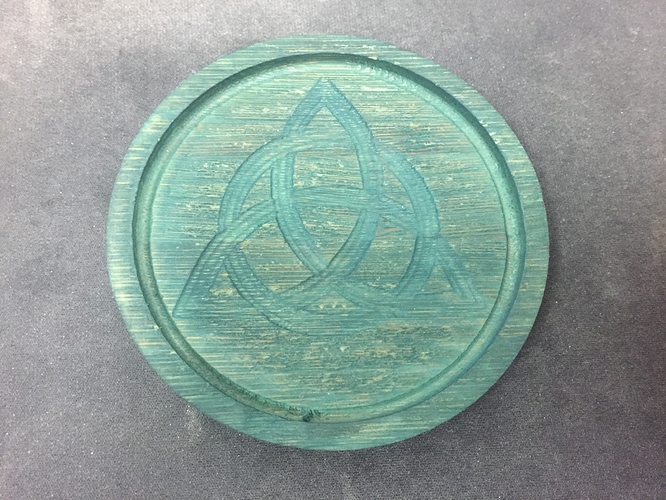 IMG_82043264×2448 1.91 MB
Here I stained the bamboo with TransTint wood dye mixed in denatured alcohol.
The bamboo sucked it up very quickly. It came out a little darker than I expected.
I still need to seal it or the dye might leach back out when the coaster gets wet. 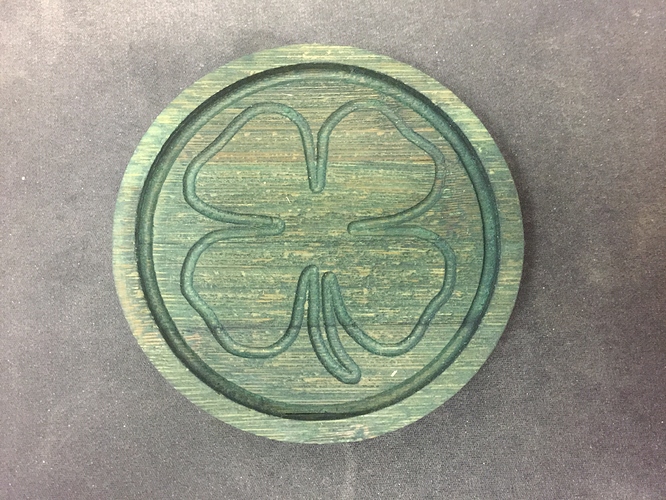 I like the basic coaster shape and the bamboo material, I will be making a more of these.

I may try playing with the color a bit. The alcohol dye absorbed so well I think I may try dyeing the top of the coaster after the pocket is cut so the 2D lines are in plain wood.

I could also pour in a little colored resin, let it sit and re-cut the pocket. An idea to try later

I never worked with Bamboo until I got my machine. It is fun stuff, easy to cut and looks great. Nice work on your coasters.

where did you get the bamboo? is it just cheap Walmart cutting boards or the “real” stuff from a wood store?

For me cutting boards. I think the original poster is using bamboo flooring. There is a surplus building material store in my neighborhood and I plan to pay them a visit.

I got a big box of bamboo flooring from Home Depot for around $30.

Aaron - on your resin idea… you wouldn’t be filling it completely up, right? You’d use just enough resin to fill the design so it looks “painted” in after the pocket is cut again? Actually, you wouldn’t need to re-cut the entire pocket if you didn’t fill it up… just have it start lower to save time?

Yes, just do a single pass to cut the resin flush with the bottom of the cup.

I did the resin inlay version. I used some smooth on color match resin, smooth on pearlescent power, and some aqua glow in the dark powder I got from Amazon.

First I cut the basic coaster shape with a 1/4" end mill, but cut it 1mm shallow so I would have some wood left to be milled away later.
Then I cut the resin inlay pocket with a 1/8 ball nose bit. The ball nose left some “ridges” in the bottom of the pocket, but that is ok I figure it gives something for the resin to really grip onto.
I could have easily used an 1/8" end mill for a nice flat bottom. I guess I went with the ball nose because that I what I had been using for the outline versions?
For this project it didn’t really mater. 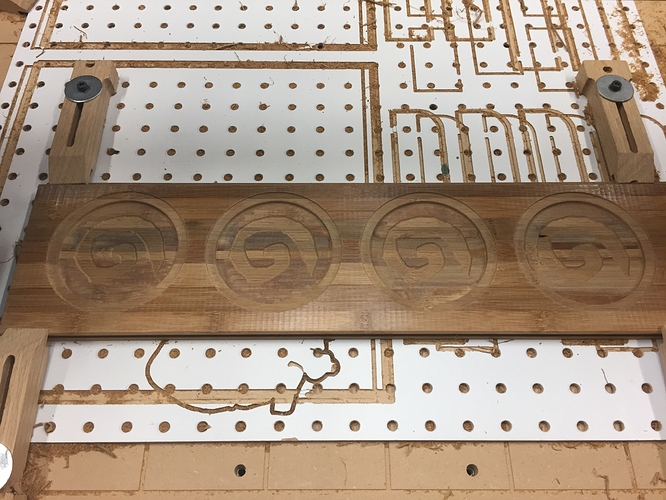 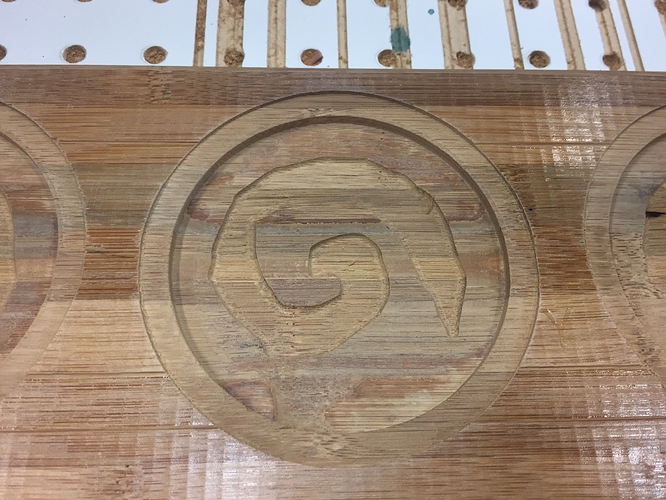 I then mixed and poured in the resin, not worrying about overfill as I would mill it away later.
Because the bamboo is so porous lots of air bubbled up through the resin as it cured. Resulting in a lot of air bubbles in the resin. I don’t really care for this project. If it mattered I would need to seal the wood pocket somehow before the final resin pour.

I then recut the main pocket with 1/4" end mill carving away last 1mm of wood and resin and added the inner “ring”.

The first time I did this I carved too much of the resin away, leaving too thin of a layer behind. You can see the wood behind the resin and the worst of the air bubbles. 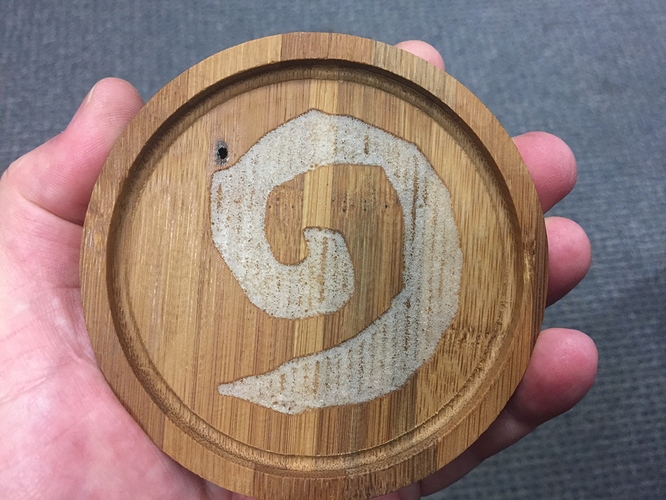 I doubled the thickness of the resin inlay hole and it turned out exactly as I hoped. 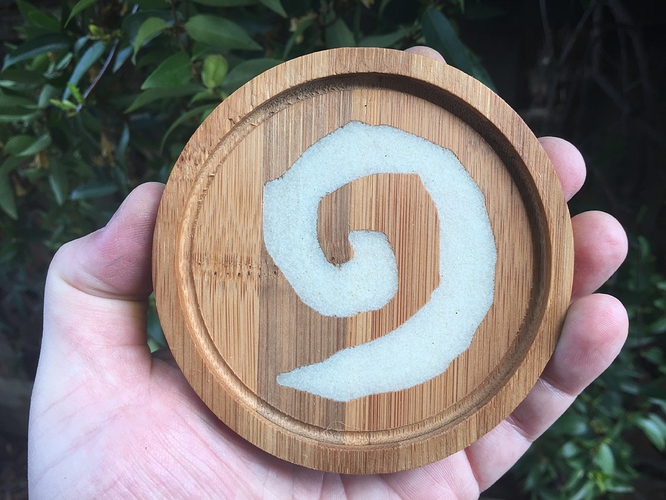 And here is how it looks in the dark. 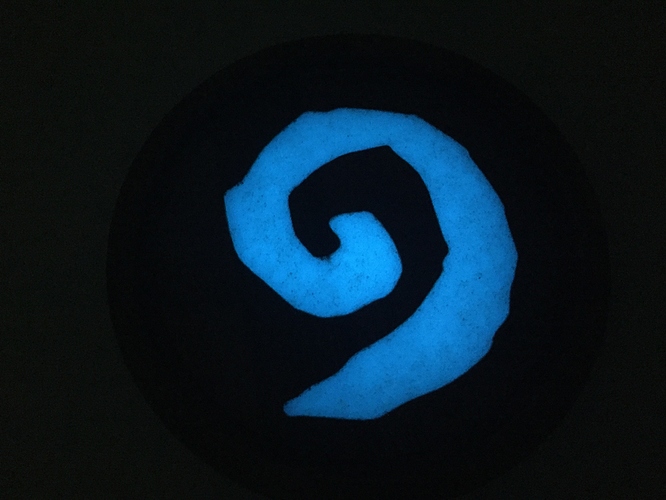 I tried using some wood dye on one of the coasters, it worked too well. The dye covered the resin so that it doesn’t absorb light very well, really cutting back on the glow in the dark effect.

So for the inlay versions, I will just be doing raw wood sealed with tongue oil finish versions.

I made some glow in the dark ones for St. Patrick’s Day 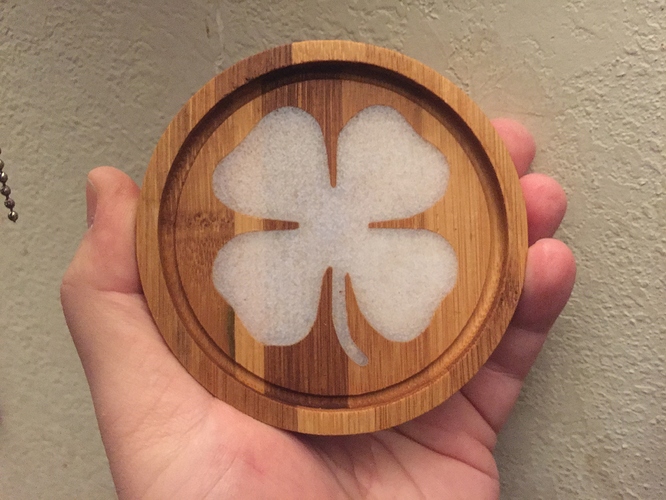 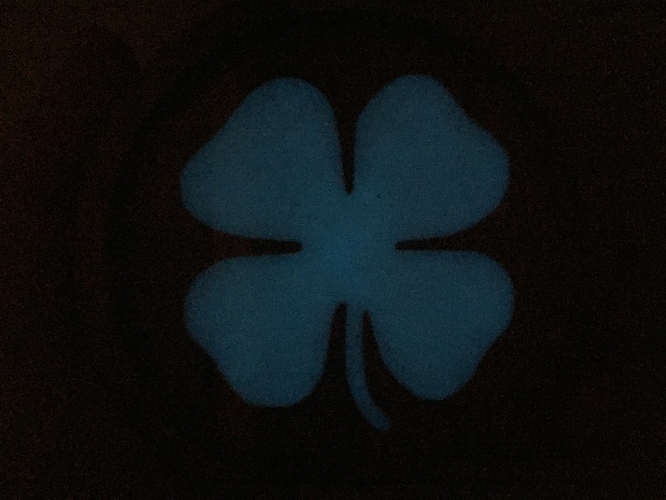