I’m building a meat carving station for my band, to be used at an upcoming competition. Aside from trying to figure out the logistics of building a 2’ x 4’ x 3’ table with adjustable-height collapsible legs that also looks cool (different challenge for a different forum), I thought I’d up my game and bring some CNC into the mix.

So, having already designed the logo, I decided to stretch my legs and create a relief carving of it.

Here’s the most recent prototype: 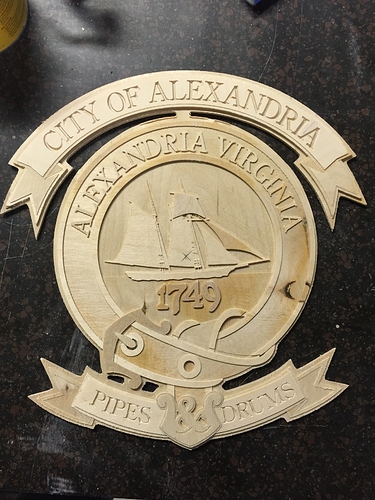 So, to create this piece obviously there were several different tooling strategies at play.
First, I found the center of the workpiece and marked it all the way from corner to corner so that once the relief was carved I could re-find the center point in case I lost it along the way.
Next I loaded it up into the machine and set my 1/32" bit on the center.

In Easel, I selected all my artwork, clicked the center domino button, and then entered 0,0 for X and Y. This put the center of my design on the origin, or 0,0 point of Easel’s workspace. It will still generate toolpaths even if the artwork is “out of bounds” so I used this method to trick Easel into using a center origin.

After letting the first carve finish, which gave me all the different depths, I loaded up my V Carve files into UGS.
(I tried using Easel but it doesn’t like all the commentary that F-Engrave puts into the gcode file.)
I used one file for the top rockers and one for the bottom, since they were at different depths.
I set the Z 0 point based off of each rocker, re-zeroed the machine, and let 'er rip.

F-Engrave, doesn’t respect artboard boundaries, so to get everything to line up right I’d have to manually and numerically enter an offset for my objects, so rather than do the math I made “crop marks” to borrow an old printing term. Marks that define the outer edges of the artwork so that F Engrave can align the different files properly.

After cutting each rocker banner, I reset the zero point and loaded my third bit for the outline. After that I just cleaned the edges up with a razor blade as a scraper and some 400 grit sandpaper. The plywood is really stringy and I had some nasty chipout along the profile edges. Hopefully that won’t be as likely if I use a proper hardwood like walnut for the finished piece. And, there was a big knot in a middle ply that caused part of the design to blow out. But I kinda like it. It gives the piece character.

I’m on the fence about whether to just stain the wood or have it painted to match the graphical logo. I might do both, one in nice stained hardwood and one painted plywood.

Anyways I’m very happy with how it turned out, it was my most complex job I’ve done with the X-Carve so far, using 5 pieces of software (Illustrator, Inkscape, F-Engrave, Easel, UGS), 3 bits, 2 carving styles, all on one piece.

So what do you think?

While the carving is absolutely beautiful, I am still hung up on “I’m building a meat carving station for my band, to be used at an upcoming competition”

What band (I am assuming you mean a musical band, not a band-of-meat-carvers) events also have meat carving as part of them?

I’m in a pipe-and-drum band. We do competitions at highland games from time to time. Each band has their own space to chill while we wait to compete, usually a popup gazebo type of thing with folding chairs. Some bands leave their members to fend for themselves for food and refreshments. Other bands do a minimal sandwich spread. Our band has a couple of members who are professionally trained chefs, and they’ve decided to do a full catering spread. This spread includes a meat carving station, which will be my contribution to the enterprise.

I can’t offer any technical advice because your project obviously displays your technical proficiency. I just wanted to say that your sign is one of the best projects ever posted on this forum in my opinion. I’ll also echo @HenryFeldman’s sentiment regarding what the heck you’re using it for. Very intriguing on top of an awesome sign. Thanks for sharing.

Wow, thanks! Funny enough, this project (and one or two others) is the reason I bought the X-Carve in the first place. After using it for a while I started to worry that my logo would be too complicated, so I abandoned the idea. Then as I became more confident, and then had an actual excuse to “need” that crest for something, I decided to give it a go.

It took a LONG time to set up the logo for carving. All the shapes had to be isolated, then I had to figure out how deep to make each one, establish a scale for the depth so it would import into Easel correctly, etc. Hours and hours. Here’s a comparison between the color original version and the grayscale “depth map” version that I used to carve: 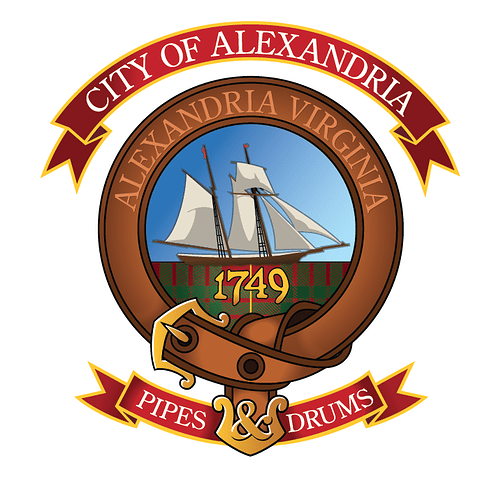 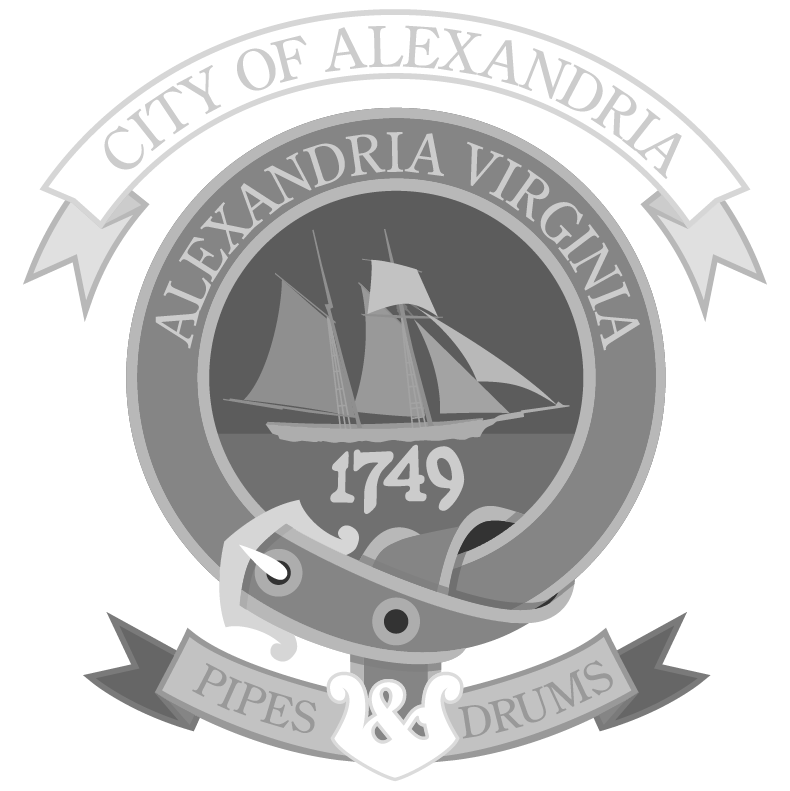 Even though I optimized the grayscale version, making it as “clean” as I could, Easel still choked on it. It just barely was able to render toolpaths and carve it. I kept getting javascript errors because the scripts would lag out tring to chug all the paths.

Here it is after some cleanup and a coat of stain: 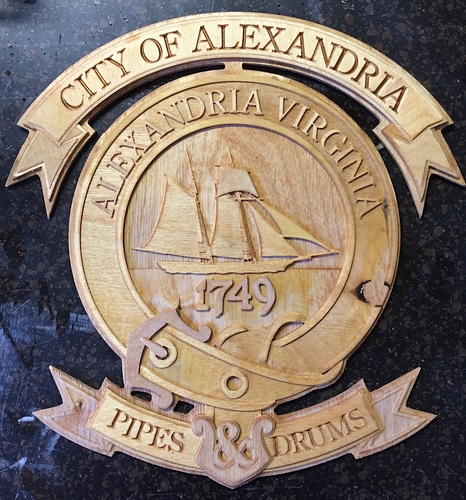 That looks great! It sounds like you’ve figured out the image modification process that many of us are still struggling to learn, including myself. If you found the time to do a decent writeup on the whole pre-Easel process, from shape isolation to establishing a scale, it would be a BIG help. There’s YouTube videos galore, but very few of them approach the process from a CNC’ers point of view. The fact that it was all imported into Easel is a big plus, since that likely didn’t require much G-code knowledge (again, good for people still learning it like myself).

@Zach_Kaplan, would a writeup on this be worth some kind of reward?

I second that emotion!

Are you asking for a write up on the design process? The process of converting an already-made print (but vector) logo for use in Easel?

I’m happy to do a write up of whatever is helpful but I need to know where to start.

I’m interested in the process of converting a complicated already-made print like your band crest for use in Easel. There’s enough guidance on YouTube to show how to take a single item and do it, but when you have to go into the picture and isolate each shape and such, that’s where I get lost.

Do you want me to just continue in this thread or start a new one?

I’d suggest a new thread, that would attract more people who don’t want to scroll through 11+ posts to find a clearly-written procedure. If you are willing to do it, a PDF and accompanying Easel file as part of a project would likely be better. Maybe something similar to my calibration test project, with a few pages with screenshots and a decent description.

A video would be nice too.

Well done! I also live in Alexandria, VA for now. Moving soon but in the Kingstown area.

Based on the title I was really hoping for a CNC controlled meat carving machine.

None the less the logo is pretty cool too

Not a bad idea

For anyone who’s interested, here’s what became of the crest, and the carving station it got attached to: 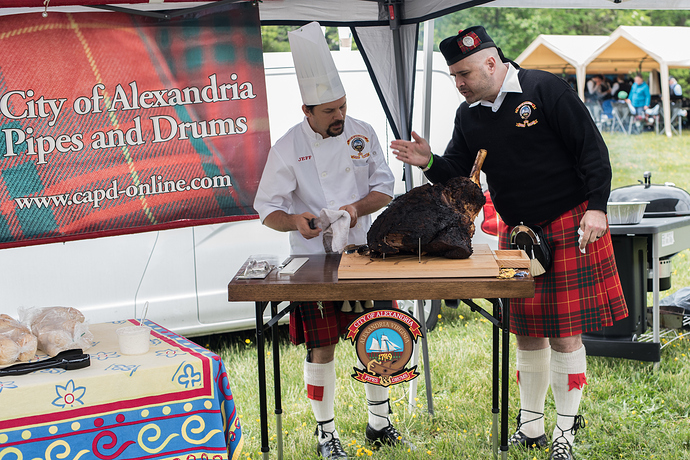 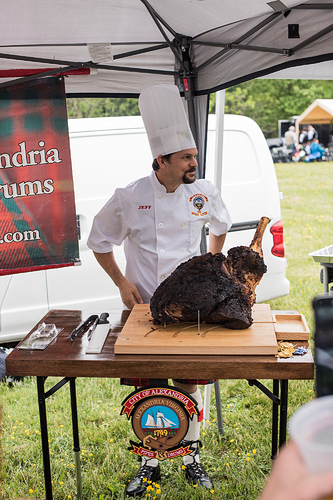 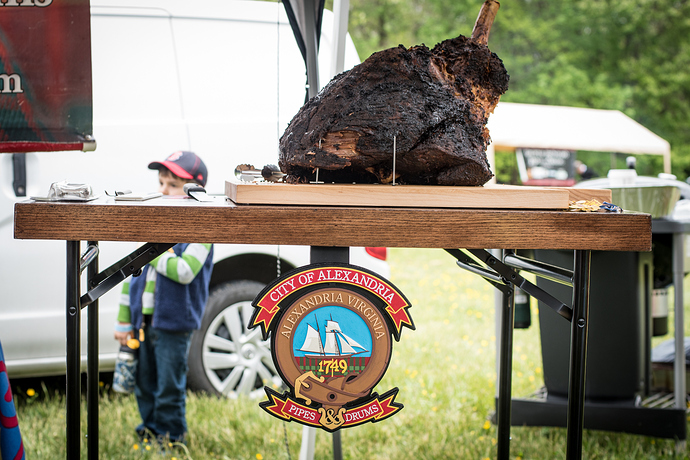 I did the grooves in the carving board and it’s removable drip tray with the X-Carve too. For the grooves I made a template out of MDF and then used my normal router with a template bit to apply it to the carving board since it wouldn’t fit in my machine as-is. The drip tray attaches to the side of the board with neodymium magnets, and is made of 2 pieces of pine glued together. I cut one piece at a time with the X-Carve so that I could use a core box bit for a rounded transition from the sides to the bottom, but not have to hog out the entire pocket with that bit.

The table top is plywood with oak edges, stained “medium brown” and coated with a hundred million layers of polycrylic*.

The crest was hand-painted by a friend and band-mate. I just asked him to do solid colors and just keep it basic, but he brought his next-level skills and even put the shadows in the sails and added gold paint to the buckles. I made a backer board out of MDF to give it some more structure and keep it from breaking or getting damaged.

The roast started out as a 75# steamship roast that Chef Jeff had specifically butchered and cut for us, as those roasts aren’t done anymore. It was seasoned with mustard, salt and pepper and cooked perfectly. It was delicious on the hand-made rolls our pipe major made to go along with it.

We also played in a musical competition, or something. Whatever.

*(protip for using polycrylic: You only get 1 stroke per line when applying it. Maybe two. When they say “don’t overwork it” on the label they aren’t kidding. So put it on with 1 stroke and that’s it. Polycrylic is water-based but that only means that the resins and binders are kept separate by the water. When you apply it with a brush, it becomes thin enough for the water to start to flash off, and the binders and resins come into contact and dry immediately. If you try to back-brush it as that’s happening you’ll end up with these rough, dry patches.)