I assembled my 1000mm XCarve and noticed the left Y belt rubs on the left side of both idlers and drive pulley. The idlers and pulley are all in line with one-another. I don’t see any adjustments on either end of the belt that would allow me to move the belt to the left or right to center the belt on the idlers/pulley. Am I missing something? Is it possible my Y axis stepper motor is toeing in or out causing the belt to ride on one side of the pulley?

Also, the flanges are there to guide the belt, so it will to rub on on or the other.

Thank you for the replies.
I looked over the assembly pictures again and went and compared my idlers, they are installed correctly.

After twisting the front belt clamp on the left Y rail a little, the belt now stays centered when moving the gantry from far front to half way to the back. From half way back to far back the belt moves quickly to the left of the idlers and pulley.

I also looked at the X belt and it too stays against the pulley (toward the operator) when moving the Z assembly far left to far right or right to left.

I’ve messed with the belt connection points on the ends to see if I can get the belt to center but the tension screw won’t allow me to make any adjustment but tension.

Although I haven’t checked the belt tension with a scale, I know the belts don’t have slope and if anything they’re a little too tight.

Here are a couple pics of the left Y belt, idlers and pulley. 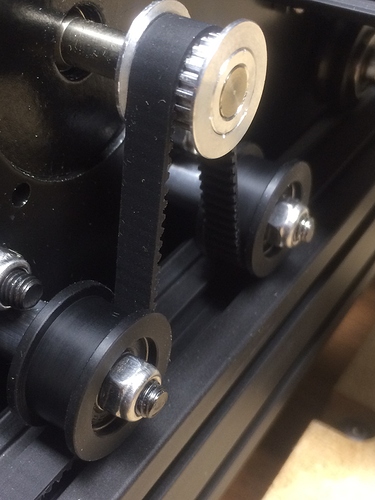 I appreciate all input. I did slide the belt to center. That made an improvement as the belt stays centered for half of the Y movement (front to halfway back). From the halfway point to far back the belt move quickly against the left side of the pulley.

I suspected during the build that the belt wasn’t cut straight. I’m going to order a new belt, if anything I’ll have a spare on hand.

My stepper motors don’t look the same as the ones pictured in the buy section. Likely not an issue. I’ll look at the kit BOM and figure out which model I have to measure against the specification sheet.

The new steppers have a crimped on pulley and, last I checked, Inventables was not selling those steppers on the site.

Before buying a belt, contact Inventables support and see what they have to say. They may provide a new belt if the belt is in fact defective.

If you’re feeling adventurous, flip the belt 180 degrees so what was the back half is now the front half, and see if the problem changes to be fine on the back and slide to the left at the front. That should clearly indicate a belt issue.

Good idea - I already bought the belt. I can’t contact customer service until I get home from work. I will flip the belt but I think the belt cut is off and the teeth aren’t perpendicular to the belt edge. I think the teeth are getting seated in the pulley and driving the belt into the side.

Thanks for the guidance - xcontoller arrived and I couldn’t slow the urge to make sawdust. 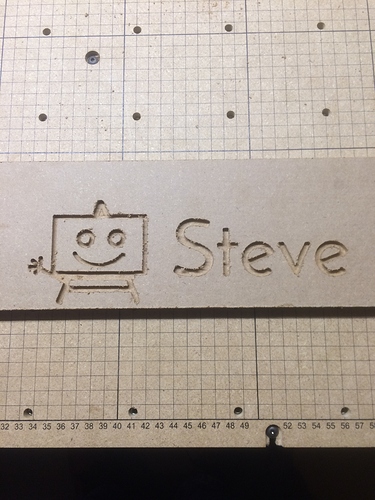 No sir, after receiving and setting up the controller I couldn’t hold back from cutting. It was after 11pm when I finished and I needed sleep.

Did you have any luck correcting the x axis belt?

I broke that belt, and cant get the replacement belt to ride in the center of the stepper pulley. At always rubs toward the front.