I’m upgrading my X-Carve with the larger belts, motors, and Z Axis. Anyone else having issues getting both screws into the brackets that hold the new belts? Only thought I had was to bend the brackets larger than at a 90 to get them both to fit into the bracket then bend them back. Not happy I’m having to bend new parts…

Horizontal Long one in first, then the shorter vertical screw can almost sneak by, you’ll have to bend less.

I got so mad at myself because I was certain I was doing something wrong until I posted and several people have had the same issue. I went to Home Depot and bought M5 8mm flat head Phillips screws and M4 20mm socket head screws and it seems to work. I loosened up the screws to get a better picture. I haven’t fired up my machine yet so we’ll see. 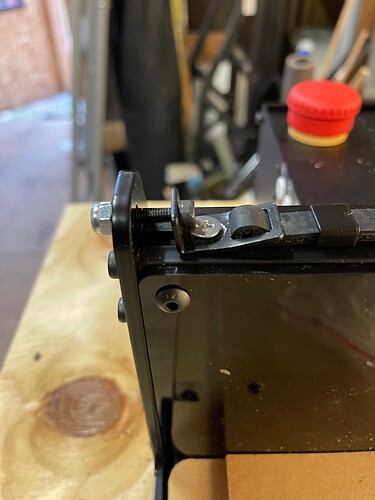 MatthewWMcClary recommended these and I may switch out what I’m using to give these a try.

It took me 2 days to get my upgrade complete and I figured out how to get it to work the 2nd day (after I posted this to the group). Still not a great solution but got a couple to work this way:

Put in the short screw 1st, then the longer one as far as you can. I then grabbed the allen wrench and screwed in the long screw until it passed over the shorter one (took a little force to get it there).

Not the best solution as I’m sure I probably stripped a few of the threads against the bracket doing this but was able to get it in without what I was doing before, which was putting the bracket into a vise and bending it…

Yeah I tried that and at one point noticed the allen wrench was starting to bend.