I haven’t been on the forums for a while and wanted to offer this idea for belt calibration.

After running it on a ruler to get it fairly close first. A larger measuring device would be good. I use a v bit with a flat spot but anything will work I think.

Set up the digital calipers parallel to the axis you are adjusting. Use three blocks that are the same height. Use a tie down to hold the body of the caliper. Make sure it can move and zero it out against the bit. Move and read the measurement, adjust etc. I usually do each Y axis separately but it seems to work pretty well with out guessing on tension. 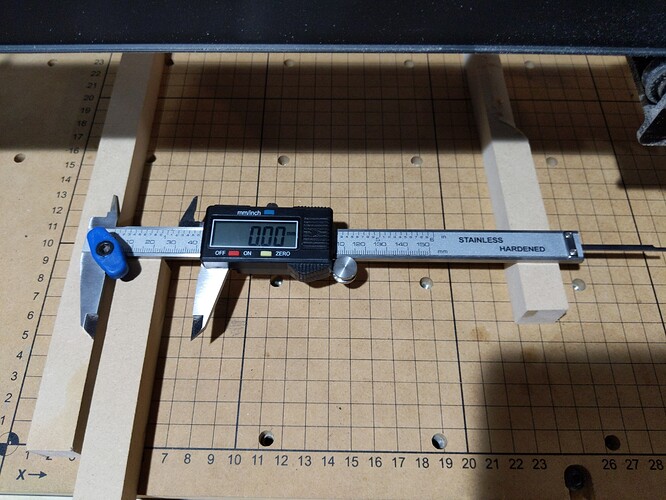 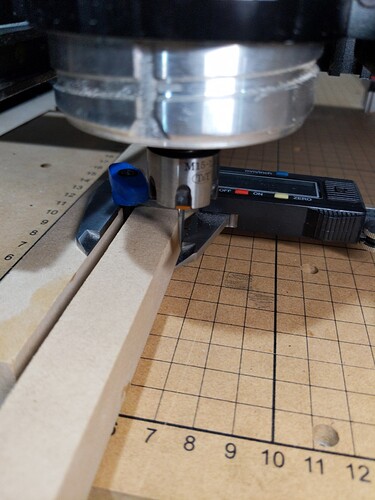 Can you explain how your method relates to belt tension?

The distance traveled is relative to the tension in the belts. Using a guitar tuner or weight method won’t necessarily match the Y axis belts or have the router move 1 unit exactly. By adjusting the tension on each belt so that the distance the machine is supposed to move with what it actually moves you can get the machine to be quite accurate.

The distance traveled is relative to the tension in the belts

It shouldn’t be until you start stretching the belts.

I only partially agree with your idea.
First off the belts should be tensioned relatively equally.
And at that point ONLY if the Y does not move equally should one consider changing tension.
I think the only reason one would travel more that the other is if one was old and stretched and one was new. If I had a Y belt fail I would recommend that both be replaced.
For general travel calibration, it should be done in the GRBL parameter of steps/mm.
Your image of using a caliper is novel but I would prefer using a rule scale 25 inches with 1/32nd increments. The longer the travel the more accurately tune steps/mm.