I’m having issues with missed steps on Z. Removed the little belt and the spindle mount, and tried turning the ACME rod from the pulley by hand with only the Delrin nut riding.
In two places, about a third of the way from either end, it’s noticeably harder to turn the pulley.
Took the rod out entirely and dropped it into the channel of a piece of 20x20 extrusion to check if it’s straight. When I push on one end, the other end rises out of the extrusion by about 2-3 mm. Then I roll the rod 180 degrees and when I push, this time it doesn’t move.
(I have video of the process if that’s not clear.)

Question 1: is my ACME rod bent?

Question 2: does it matter, or should I just tweak the power on the Z axis motor & hope for the best?

Video of the procedure.

If that would cause binding of the delrin nut however, I would not think so but call in to the inventables help desk wouldn’t hurt.

During assembly did you run the nut upand down the rod multiple times with the end of the rod in a corless drill? It helps to “wear in” the nut before assembly. a touch of a dry lube or silicone smooths things out a bit as well.

Yeah. Problem being that the drill has plenty enough torque to power thru the rough spots, which is why I didn’t notice them until just now.
If the Z motor can be made to supply enough torque, I can probably live with this.
I was just curious if anyone else lives with a slightly bent ACME rod or if this is the kiss of death.
I’ll definitely call Inventables tomorrow, see what they think.

Mine seemed tight when I was “wearing in” the nut and the rod. I ran it up and down for quite a while. I noticed it was a little bent once the machine got going. My wife even came out to have a look and noticed that the rod was wobbling a little as it went up and down. Cut wise, however, it hasn’t seemed to make any difference. I guess it depends though on how bent the rod is.

Shouldn’t make too much of a difference. There is always a certain amount of “screw whip” when using acme or other threaded rods. Sounds like the nut needs to be broken in more.

I’ll give it a more thorough spin with the drill, tweak the Z motor current limit and see where that takes me.

I straightened mine like i do bent push rods on mower engines. roll on sheet of glass mark high spots lay on some wood face high spot up hit with mallet repete process until desired runout is achieved. Took me less than 10 minutes to straighten.

Mine has a slight wiggle that I attribute to a problem with the acme rod, it doesnt affect my cut but you can clearly see it wiggle ever so slightly when moving up and down. This reply is not much help, except to know that you’re not alone I suppose. I can still cut perfect circles and most carves look good. No major z missed steps, so maybe yours is more bent.

I’ll give the mallet a try tonite after work. I confess it would bug me to know the part is bent, even if I got perfectly fine results from the machine.

And thank you all for confirming it’s a common thing and nothing to freak out over. Gotta love this community!

I don’t seem to be making a dent in the bent rod, not without hitting a lot harder than I’m willing to.
Going to put it all back together now that I’ve run the nut back and forth a lot more, and apply some lube + crank up the current limit on the g shield for that axis.
Wish me luck!

Depends on what kind of lube. I use the DRY lube used on modern bicycle chains. I would not use a petroleum based product. 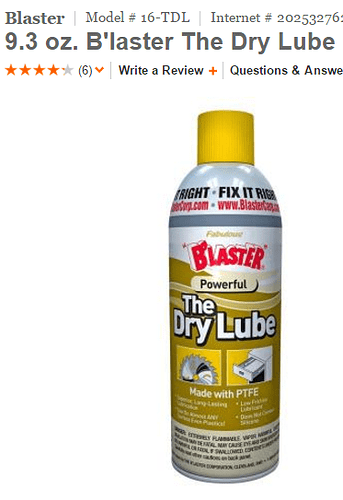 Pretty much the same thing…here is what I use:

Did Inventables accidentally sign off on a large shipment of bent ACME rods at one point?

Picked this up this morning, along with some 1.4" stainless rod and some removable Loctite.
Will use the dry lube when I reassemble the Z axis.
Thanks!

Success! Looks like the mallet had more impact on the rod than I thought. Zero visible wiggle when I turn the axis by hand, now. That end used to move several millimeters.

The dry lube also seems to be helping. Feels smooth as butter. I’m confident that once I tweak the current limit, everything will be copacetic.

I get about 3/4 of the way up the Z axis and it sounds like it is grinding against something and the motor seems to be slipping. No spindle mounted, just running test movements. Does it just need some love or am I missing something?

That sounds a lot like the symptoms I was getting.

Fixed it with a combination of: