I would like to know the best bit and settings to make a clean cut with a single pass in 1/4" Baltic Birch Plywood?
I use a X-Carve 1000mm with a Dewalt 611 router.
I found some infos on the web but I want the best for my X-Carve.
Thanks,

One pass would be pretty aggressive with a .25 bit in the 611. You can do it in two passes easily with a good .25 downcut spiral end mill at about 60ipm with the dewalt speed on 1. If you machine is very rigid (you have modified the X axis) then you can speed up the feedrate if you want to experiment a bit.

I dunno, I’ve done 1/4 in both cherry and walnut with an up-spiral 1/4" bit easily enough. Got a little bit of chatter, but nothing too terrible. I used 32 in/min as I recall.

Sure, you can do it Dan

, your machine is finely tuned and very rigid. Plus you have - who knows how many hundreds of hours making beautiful things.

I would not want anyone to start out thinking a .25" DOC is good place to see how well their machine can cut.

Ok, granted, granted, my machine IS dialed in pretty tight. That might be a BIT aggressive for a machine with somewhat less worked-out setup. You’re probably right with using two passes being a sure thing. I just know it CAN be done easily enough, with a good setup.

As I’m thinking, I also run my spindle a lot faster than you do, so that might make a difference as well.

Baltic Birch is considered a hardwood so you use this chart.

You could increase the feed rate by increasing the RPM. The key is to do it proportionally.

I don’t think 1/4" in one pass is a good idea. You’d want to do some testing with your machine to see how deep you could go before it sounds like it’s getting bogged down. Having an X-Controller would make it so you could carve a deeper depth per pass.

I’ve tried that, actually, Zach, and it chattered all over the place and gave me all kinds of trouble. The machine just wasn’t rigid enough to take the speeds. Slowing the feed down to 32 in/min gave me a much better finish. Still making decent chips, not dust, so I know my cutter is working acceptably. I am using actual hardwood, though, which might be a bit of a different critter.

Actual hardwood is a bit of a misnomer because each hardwood has it’s own hardness. The harder the wood the more chatter you’re going to get. I have tried the same settings with Walnut and Wenge and since the Wenge is harder the result were worse.

Two-flute Freud 1/4" downspiral, low-shear. Depth per pass I’ve take up to 1/4" in both walnut and cherry, although I have somewhat better luck in those at 1/8 or so. The 1/4 works fine with 32 ipm for me, no burning at all, still getting chips not powder, so I know I’m cutting and not rubbing. Bits are lasting well, which I’d expect given good Freud carbides.

Do you have a digital caliper to measure the chip thickness?

I do, next time I cut one I’ll do a quarter-inch pass and see what I’m getting. They are thin, but nice and curled, not powder. About the same as I’d get with a similar depth on my router table, for the most part.

This is a piece cut with those exact settings, I made 20 of them in this run: 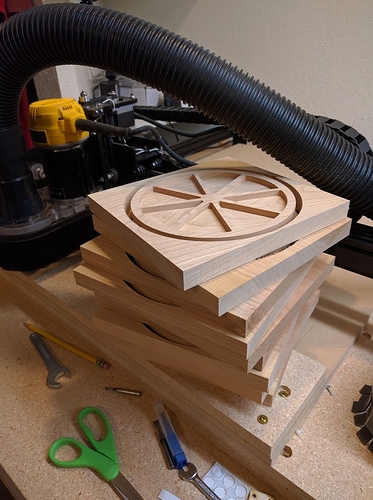 And this is cut with similar settings, except this one did not use the 1/8" bit, since the radii I could use were large enough to not need the additional tool change. This was done entirely with a 1/4" upspiral Freud two-flute, instead of the downspiral I use for thinner material. The pockets are 1/4" deep, cut at 50ipm with about a 40% cutter engagement in one pass, using an adaptive clearing path, then finished at 40ipm with a .020 skim cut on the bottom and side walls, repeated sidewall finishing pass and a 90% stepover on the floor. The profile was cut out in three 1/4" depth passes at 32 in/min, then finished with a single step-over of .020, repeated once at full depth for finish. 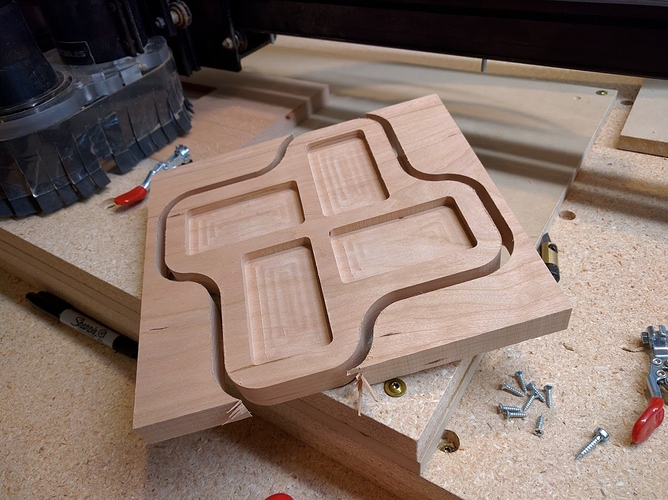 EDIT: This is during a pass with the 1/8" bit at 1/4" depth and 60ipm. Not really the chips I wanted to show, but the ones from the 1/4"x1/4" 32ipm pass look very similar. Note, the marks on the walls are from the end of the adaptive clearing swipes, those aren’t chatter. The finished walls on this after the finishing passes look just like the piece shown earlier. The side lighting here makes them look burned, but in reality you can see them on the “top” pockets as well, and they’re the same tone as the rest of the wood. This is cherry, for reference. 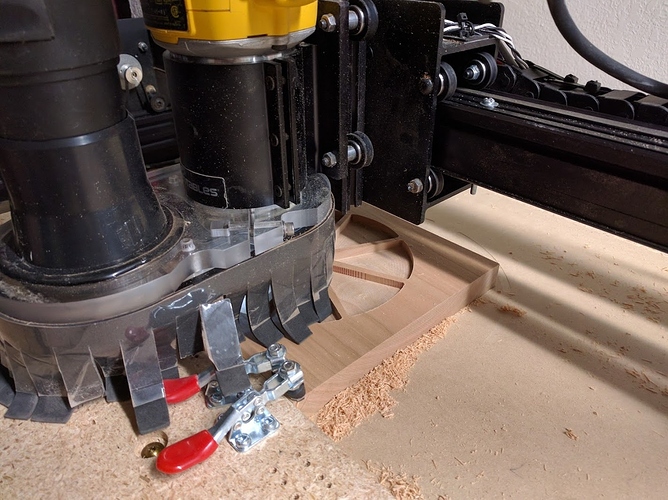 I’m getting really interesting results right now lowering the depth of cut and increasing the feed rate. When I do pockets I usually get the lines like you can see in @DanBrown last photo, but with the lower dpp and higher fees I’ve gotten some really clean bottom cuts using a 1/4" up cut spiral Amana. 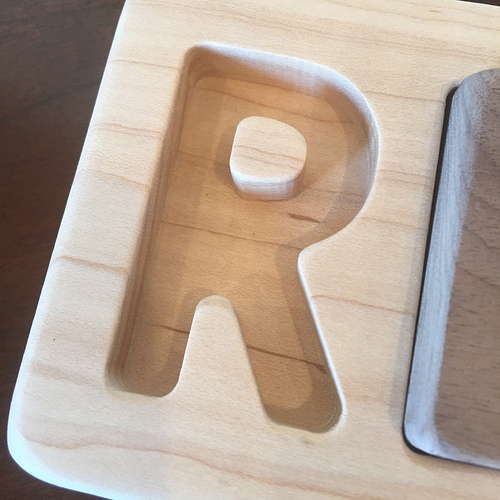 There is a little bit of spiraling at the bottom right, but no lines. I’m curious how it will do with a straight flute.

I just did another run last night, working up a new project and testing out the Suckit dust shoe, so I figured it was a good time to test this out. The cuts were 1/4" deep, with a 1/4" freud downspiral cutter, at 32 in/min of feed, for both the pockets and the cutout profile. I tried at both full speed on the router, and speed 3, both of which gave acceptable results. The smoothest feel seemed to be in the 3.5-4ish range, which is fairly common. As a side-note, the new eccentrics with the better adjustment MASSIVELY improved the sound and feel of the machine in work, the roughing cuts came out looking darn near as nice as the finish passes! 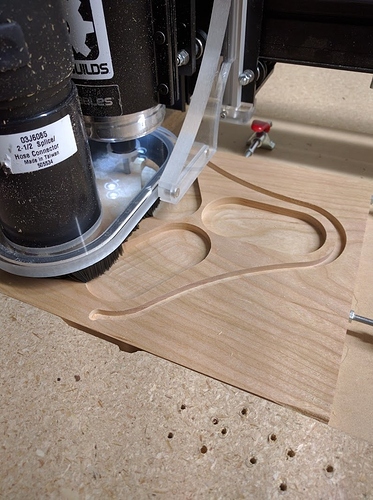 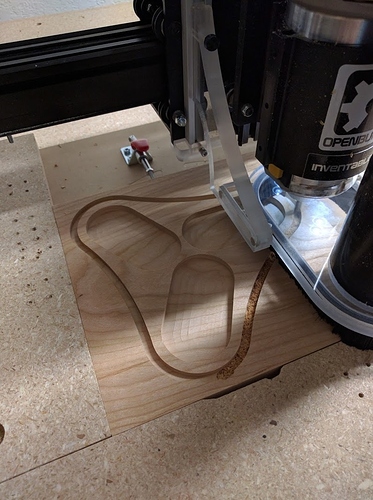 I grabbed a pinch of the chips out of the cut that’s shown being made in the last photo for examination, this is photographed with my phone at the camera’s max zoom. The chips are from about ~1.5" after the start of the cut, the same cut shown in the photo, pulled just a couple seconds after the shot, before the spindle came around again. There was no sign of burning or other imperfections in the cut that would indicate over-heat. This is the second of three passes to get through the 3/4" material, the first pass left no usable chips for examination due to the stellar performance of the Suckit shoe. 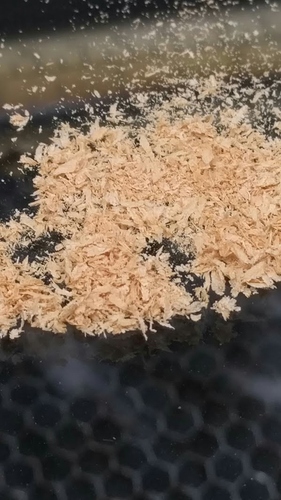 The cuts were 1/4" deep, with a 1/4" freud downspiral cutter, at 32 in/min of feed, for both the pockets and the cutout profile.

The idea of a 1/4" cut depth is still hard for me to process. I usually go so much shallower.

It’s definitely fairly deep by the standards of the X-Carve, but it seems to work well for me. No chatter, no sound of the router unduly laboring, etc. I guess I wouldn’t think twice about using a quarter-inch deep pass with that bit in the router on the router table or hand-held, so it seems reasonable to me that it’d still work when the router is moved under remote control.

Lots of ways to make it work!

Thank you everyone,
I had my x-carve for two months now, it is staight out of the box, it’s not rigid for now but it’s in my plan to improve my X-Carve.
I made some tests with a .25 Freud two flutes downcut speed on 1. I did it in two passes at 60ipm as mentioned by Allen Massey. The result was very good.

Will I have better result with a two flutes straight bit?

At the same time, what do you think about the Amana tools set bits?

The downcut spiral will give you a much cleaner top edge,. I have a few Amana tools and they do a good job, but I really like the Onsrud or Freud cutters, they leave a really nice bottom finish in your pockets. I will use the straight flute tools when I am cutting dado’s and the bottom finish is not as important. But the straight flutes really make a lot of noise when they are cutting.

I’ve used Freud and Amana both extensively and have not seen a significant difference between the two. My only Onsrund bit broke almost right away so I can’t say much there.

I had my first experience with a down cut this week and it definitely made the best cut at the top. No fraying at all, which was what I need for a particular product, where the design made it impossible to sand the frays out. I didn’t see any difference in the bottom of the cut however, so I will continue to use straight bits whenever I can because they are cheaper.

If noise is a consideration then like @AllenMassey said they are much louder, but I have found that going faster with a shallower cutting depth lessened the squeal significantly.

I’ve had good luck with both straight and spirals, myself. Straight DOES tend to be a small bit noisier, and doesn’t produce quite as nice of a top finish, but makes better pocket bottoms and walls that can be a tad cleaner. With sheet goods like your plywood, I would be tempted to stay with the downshear, just for the additional downward pressure it applies. Tends to prevent lifting in the middle of the sheet.

Amana tools are quite good, I’ve had no reason to complain with them at all.

Yeah, you can get away with a shocking amount of brutality to the tool sometimes! At one point when I was first working with Fusion 360 and ChiliPeppr, I had a G28 problem that crashed my 1/8" Freud two-flue upspiral down into a piece of walnut, ripping it crosswise in rapid through ~2" of material to a depth of about a half inch, and cutting off about half the head of a hold-down screw during said pass. And the bit survived. I continued using it for several more days until I could get a new one. The upper portion where it tore into the screw was a bit chipped, but the lower portion that does almost all the cutting was still fine.

I still have the cutter, and it’s still actually workable. I just quit using it for obvious reasons, and it’s now a talking piece on my shop bench. 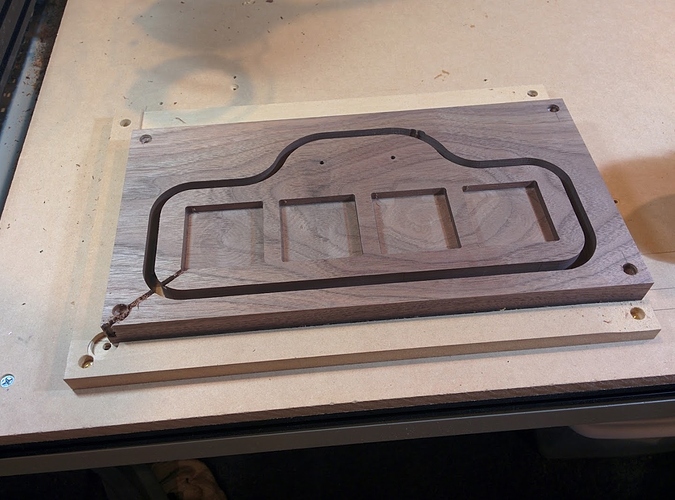