Bevel a cut out part?

Not sure if this is best placed in the Easel section, or just general X-Carve…most please move as appropriate.

How does one get a good rounded or beveled edge on a cut out piece? I guess I could buy a router and manually run the corners, or build/buy a router table to make it a little easier…or use a sander or some sort.

Is there a standard bit I could do and make a final outside pass around the object before pulling off the piece and taking off tabs?

Thoughts on being able to add a feature request to Easel to be able to specify a distance (from the edge to start the bevel) and type (rounded, angled)?

Not sure if you are using wood, but, a round-over router bit may work.

I’ll be using wood and maybe some acrylic.

How would one translate that into Easel? Would I have to create a separate project just for that cut and that bit in the same location as the rest of the part?

You could use Easel, but I think you would have to create another project with the outline drawn at a bit of an offset, use good ol’ Pythagoras! or the what ever desired CAD software to figure out the depth/ offset you would need.

Ok, so router table it is!

Might still be an interesting feature for Easel down the line.

lol ya, the router table wouldn’t be the worst idea in the world! I agree though, with V-Bit support in Easel this operation wouldn’t be too difficult. I think in Fusion you can just add a chamfer operation and it will figure out all the offsets that would be required.

I havent tried this yet but been thinking about it for a while now. I was going to try and run the original project, once that was done I would change my bit and just edit the original project file while it was still up in easel. Change everything you dont want beveled to 0 cut depth and everything you want beveled to the cut depth you want the bevel and run the program again, I was going to start with .0625 and just keep running the file going a little deeper until I got he bevel I wanted, also setting the cut to outline and outside path. Im sure it would work the same with a round over bit.

Might be a nice experiment! and this way you dont have to worry about trying to line up 2 different file perfectly!

I did a quick sketch and it looks like if you have a 90deg v-bit all you have to do is tell Easel that your bit is twice as wide as your chamfer leg and your depth of cut is also the length of your chamfer leg. For example if you want a chamfer that’s 1/8" x 1/8" you would tell Easel you’re using a 1/4" bit, your depth of cut would be at 1/8" and you would cut on the path. See diagram below. 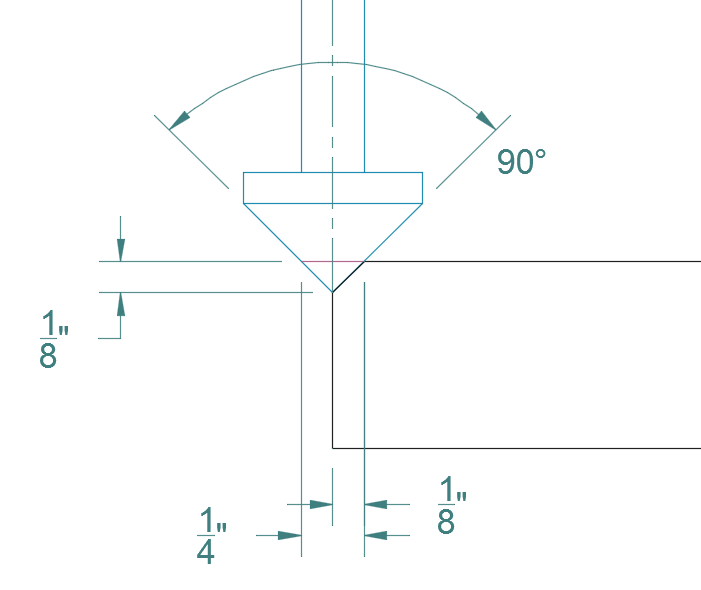 I haven’t tried this, but I couldn’t see why it wouldn’t work!

Awesome. I think I needed that visual to understand.

Ya I find it’s the easiest way to get my head around a concept!

Rusty, you got around to doing the exact v-bit/chamfer calculation I was going to need to do in about a week…!! Thanks for getting to it first…!!

No problem, I had been thinking about this issue for a bit and had a second to put together a quick sketch. Glad to see it helped!

Has anyone tried the beveled/rounded edges yet and want to share there easal file? I am trying to get a sample cut for a potential customer and wanted to see how some of you are sketching the easal drawing to do it

One of the hold-down-clamp projects does this, sort of.

For sure it really helped, will be trying it out soon!