Bit not perfectly vertical: How to fix?

I’ve been cutting successfully on my Xcarve for over a year now, good times. Most of what I do is pretty artsy, so accuracy isn’t too important. Been really happy with my results.
A friend asked me to do a cut through on a piece of plywood, and that’s where I first realized how out of true my wasteboard was: Got a 1/2" surfacing bit and planed it it nice and flat relative to my toolhead. Bam, nice cut throughs now.

And thats when I realized that my bit isn’t perfectly vertical relative to the xy plane: Even though globally the wasteboard is now perpendicular to the xy plane, I could see that on every X-pass the surfacing bit did, the side closer to me was slightly higher than the side further from me. So there’s all these little ripples when you run your fingers along it front to back. I recently cut a pocket with a smaller bit (something I rarely do), and I could tell that even with a 1/4" bit, the ridges were still present.

So what’s a good technique for getting your bit\router\x-gantry perfectly perpendicular to the wasteboard? My current though is to loosen the four bolts on either side of the long X-beam, and try and slightly twist the whole operation, then use the surfacing bit again on some scrap wood, keep doing that until I can’t feel the ripples. this seems really time consuming and clunky, and figured there may be a better way.

The issue is subtle, but annoying. Thoughts?

I used a large square against the waste board and the x axis.

Thanks Phil: But how do you actually do the adjustment once you got your square up there? What do you loosen/retighten/etc?

I did as Phil suggested and then I added a small shim made from some brass sheet as a final tiny adjustment. 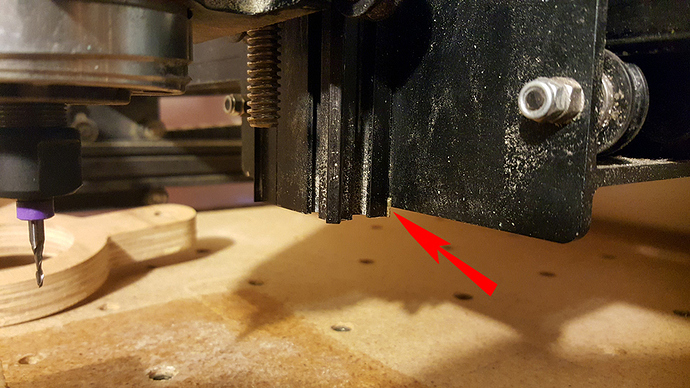 I did it without the spindle in the mount. It’s lighter. Loosen the 8 screws. Square from one side. Tighten only one screw that side. Go to the other side do the same. Go back to the first side and verify nothing moved. Tighten all the rest.

Wouldn’t you want to do it with the spindle on? In case there is any flex happening, you can account for this with the adjustments? I’m about to do the same thing and not sure which is better, with or without the spindle.

I used some 1-2-3 blocks I had laying around and placed one on the waste board and held the other on the X-Axis beam, loosened the 8 screws on the X-Axis and set it from there. like Phil said snug a couple on one side then check the other, snug a couple there and recheck the first side. I did mine with the spindle on. I was amazed at how much travel/adjustment I had with the X-Axis bolts (but then again it would get exaggerated over distance).

There isn’t a lot of flex, but everything is prone to some is it not? I thought that’s the whole reason behind the move to a single piece of rail vs the two that I have now.

I believe that Phil is not stating that there is no flex on the rail when using the machine, He is trying to inform that you do not need the weight of the router “flexing” the X-axis when you have the rail loose trying to align it. Just extra weight to fight against.

Oh, alright, that makes sense. I wasn’t sure if it actually did flex while siting still or not. I’ll give it a try without! Thanks!

I have the two piece right now. Hoping to convince my better half that we “need” the upgrade package!

Thanks for your advice! I’ll let you know how I make out.

To follow up: Success (ish) : I have the two rail system, and even with them pretty loose, there wasn’t enough play to get them perpendicular. So I used the “JDM shim technique” (by using a bunch of folded up aluminum foil) to compensate for the rest.
End result is better, not perfect: My 1/2" surfacing but still leaves slight ridges, but not at all like before. But the square says is spot on measuring the front of the gantry, or the side, I made sure to square them both, I’m not sure what else I could do now. I’m not complaining, I’m just saying it’s not perfect. For all I know it could be the bit at this point.
Again, thanks for the feedback and help.