I just got done rebuilding my Z axis with Openbuilds C-rail. It took a little bit of fiddling around with to get everything to fit but its done.
The one nice thing is the extrusion came pre-tapped and the Inventables z nut fit the holes for the carriage. I used the previous z nut holes on the dewalt mount and had to drill and tap 2 more holes to get everything to fit. There was filing here an there enlarge a hole here and there but over all a zimple build.

I don’t think it is as much of an improvement as I would have liked for the work (it still has a little play and I am starting to think it is side to side play in the actual bearings) but over all I like having rail slots on the side. I plan on making a dust boot to fit on the new rails. 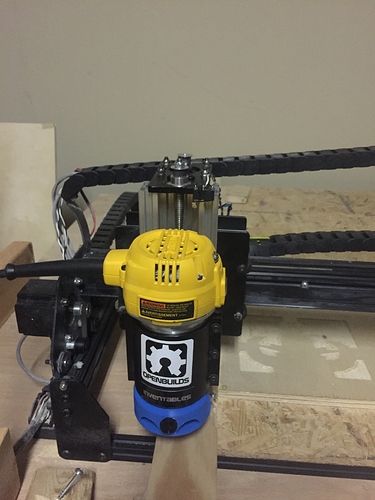 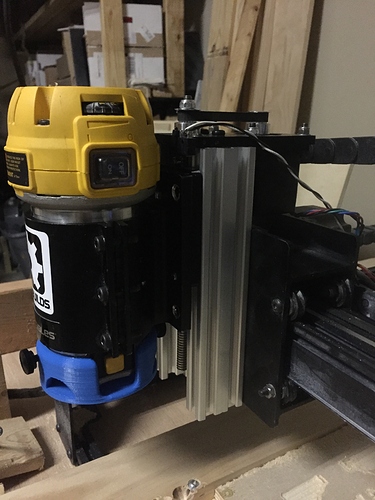 so what is the advantage of running a different extrusion on the z axis?

I could not get all of the play out of my z axis. I tried everything. So I tried rebuilding with a different type of extrusions and solid v-wheels. Tightened things up a little but not a whole lot like I was hoping.

So to answer the question it is just different. (At least for me)

oh nice so the v wheels that you used are they adjustable or do they just ride in a solid track with no adjustment?

They adjust with an eccentric spacer. They are smaller and ride on the inside of the extrusion/

oh ok hmm do you think you could share some of your individual parts that you used?


http://openbuildspartstore.com/c-beam-linear-rail/ (250mm I cut to size using a circular saw)

I had to supply 4 Screws, 2 nyloc bolts and 2 washers (to get the z nut to align properly).

Trevor, did you buy the gantry set with or without the anti-backlash nut? I’m getting some Z axis play that I’m unable to clean up with V wheel adjustment and I’m thinking this mod may make more sense.

Any reason why you didn’t convert to using the stepper motor on top of the gantry as Openbuils shows in their configurations, versus still using the belt?

Nice! I was considering doing this a few months ago; great to see it in action. Curious, what are the advantages of your 3d printed air diverter? Less dust inside the spindle?

I’ve actually been considering something like this as well, I’m getting movement in my Z-axis V-wheels that I just can’t tweak out. I’m going to be upgrading ALL of my V-wheels to use the eccentric spacers and locknuts, I just started working with those on my MendelMax 3d printer build, and they’re SO much easier to work with and get adjusted right!

I’m actually looking at going to using the metal V-wheels on the Makerslide as a start, and see if that does the trick along with the better eccentrics. Also, I think I’m going to 3D print some brackets to hold cheap toothbrush heads or something similar right in front of the wheels, to brush the rail before they roll over it.

I love the 3D printed tooth brush holder idea, let me know when you finish it, I’d be happy to print it out and test.

I just used the stock nut. It took a few washers to get it right though. The only reason I didn’t buy a drop in replacement for the nut was two folds. I only had maybe 200 hours on the original and they were out of stock at the time.

The reason I kept the z motor the same was just a preference thing I liked how it looked and I didn’t want the motor being that high (after you add the coupler it would add and aditional 4-5 in sticking out the top) it did however take a bit of work to get the alignment perpendicular.

The difference is a big. After the air diverted the amount of dust build up on the rails was reduced by 95% (made up percentage but a huge reduction) i hardly have to wipe the rails now and I don’t have to during a job anymore.

Good point! I hadn’t thought of that, it’d be fairly trivial to drill and tap holes to just mount them through the handles. I’ll do that!