I’m brand new to X-Carve. As a matter of fact I just completed building it about 3 hours ago. I walked through the Easel demo program allowing my X-carve (500mm) to just run through the paces without any bit (or wood) installed. Looks like things are good.
Now, like several others I’ve seen in the forum, I don’t want to put a PC in my shop (too much dust). But slightly more than that, I’d like to optionally not even have my PC turned on when I’m running my X-Carve. My initial plan is to use X-carve to build several (about 100) duplicate cutouts for a friend’s wedding favor. As a result, I’d like to just create my design on Easel (or something similar); then transfer the result to a raspberry pi and then allow it to drive my X-Carve without the PC at all.
Has anyone done that? If not, does anyone know of a reason why it could not be done?
I’m a C-programmer so I’d be glad to help getting this to work if it doesn’t already.
Thanks in advance for any thoughts or suggestions.

As you’ll just be using the Pi to send gcode to grbl on the arduino, it should be easy enough to do.
Options that spring to mind would be grbl Controller or even UGCS
Do a search here and I’m sure you’ll find a few people doing this.

I’m going with that setup. From what I’ve seen online, UGS is the way to go to send Gcode. Pretty sure that Easel has an export Gcode option. I’ll know more hopefully next weekend or whenever you post an update with your success story

You could do it sans-Easel (design it in Easel and then export the g-code and run UGS on the Pi), but honestly the easier (and possible cheaper) way would be to just get a cheap (often $75) Windows 10 tablet.

I haven’t done it, but this project is todo what you’re asking for:

A Node.js Raspberry Pi server for controlling a XCarve from a remote machine using [Easel](http://easel.inventables.com).

Just throwing in my .02, but I tried that route with Windows 10 tablet. Worked great the first day.
The second day, after starting up the tablet and X carve,
and getting ready to cut, I had to wait over an hour for updates, after the previous day’s 2 hours of updates.
Screw Windows. Went back to my Mac after that.
The raspberry pi sounds interesting.

Has anyone done that? If not, does anyone know of a reason why it could not be done

Check out GRBLWEB I use it and it is great. Can control the system with anything on the network and all the process are handled with the Rpi

Thanks for all the suggestions, great forum!
One key here, as @JustinBusby mentioned, is that Easel must be able to export its Gcodes to a file. Hopefully by end of week I’ll have tried some of the ideas mentioned. I’ll definitely post the results.

Screw Windows. Went back to my Mac after that.

Obviously everyone’s mileage will vary, but unless you Mac was brand-new, un-patched, and $75 it’s not really a fair comparison. 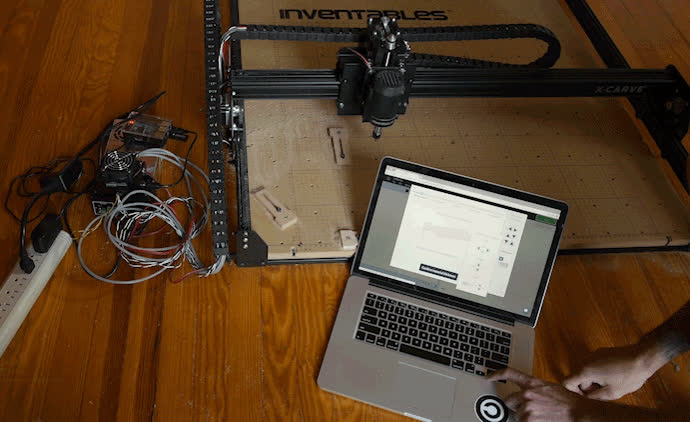 Run an X-Carve CNC Machine Wirelessly with a Raspberry Pi

Inventables' web based digital CNC software, Easel, currently requires a constant connection from a Mac or Windows based machine in order to send commands to the X-Carve over a serial port. This tutorial will show you how you can free up your main...

I have used a raspberry pi 2 connected to the x-carve at home and have had wonderful experience with it. I used the tutorial at https://learn.adafruit.com/control-an-xcarve-cnc-machine-wirelessly-with-a-raspberry-pi/install with a 8 gig micro-sd card. the only thing I want to do now is install an E-Stop button at the controller as it make me a little nervous if there is a problem with the carve so that I can stop it locally. also I use Linux at home and this was a life saver as I could give the girl friend back her windows system and not worry about using it. now I am just looking for a simple control program that I can use from android so I can also use my phone to jog and start/stop the system with it, that would make this the coolest setup ever.

Regarding the Adafruit tutorial…
It appears to me that this still requires that the PC (running Easel) be on while the X-Carve is running. Is that true?

That was my takeaway from it.

Hi Ed, to me it looks like you’re right. The tutorial sets the Pi up to be a server that communicated between your computer and the X-Carve controller so you don’t need your computer to be in the shop the whole time.

I’ve also been looking into using the Pi as a standalone computer and I believe it should be possible since plenty of people have set them up in the past as a mini Windows 10 computer complete with keyboard, mouse, and monitor. Especially since the Pi accepts an SD card and can even be outfitted with a physical hard drive like a regular PC I would imagine there should be no reason the g-code couldn’t be created on a PC then either sent to the Pi over a network and saved locally on the SD card or HDD and then the Pi used to finally send the g-code without any communication from the PC.

I’ll be looking more into this myself over the next few weeks and will let you know if I come across anything. One thing I would suggest is searching tutorials on using Windows 10 IoT edition on the Pi or simply a clean Linux install with the goal of setting it up as an actual PC. There should be tutorials either on Adafruit, Sparkfun, or Instructables so I’ll be searching during lunch today.

I’m currently mucking around with the Pi hooked up with one of the official touch screens and UGS. My main issue is the touch screen resolution isn’t quite large enough to permit UGS to render properly. Here is the makeshift setup (literally) 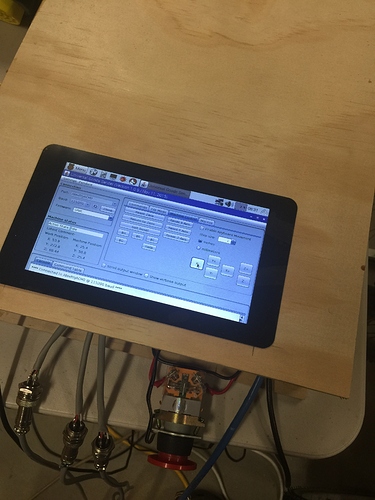 My intention is to carve the final front panel to hold all those connectors in place to complete it. I’m just having issues losing Y axis positioning whenever I carve in acrylic.

Very cool! I was looking at some peripherals for the Pi and saw the touchscreens but I was concerned with precisely that regarding the resolution so that’s good to know.

@EdSutter I was googling and came across this guide from LifeHacker that seems like a good step by step on setting up the Pi with the default Raspbian OS which I guess is the Pi’s standard Linux distribution. It also goes through installing some apps, getting it set up with WiFi and Bluetooth devices, and looks like it’s aimed towards using the Pi as a standalone mini-PC so it should be a good start. The first link is an older article and the second is the “always up to date” guide but I think a combination of the two will be useful.

A Beginner's Guide to DIYing with the Raspberry Pi

The Raspberry Pi is a wonderful little computer that fits in the palm of your hand, yet packs enough power to run your home media center, a VPN, and a lot more. Before you can do anything awesome, however, you need to configure it and install an...

So, you finally picked up a Raspberry Pi and it’s sitting on your desk, waiting for you to do something awesome with it. Good news, setting it up is stupid-easy these days, and in less than 30 minutes, you’ll be hacking away on your tiny little $35...

@Jozza Do you need to install UGS on the Pi or is it like Easel where it’s hosted through a webpage? If so can you give a quick and dirty description of how to go about installing it?

I’ve had good luck running my x-carve with a Raspberry Pi running GRBLWeb.

My Pi (v2) is connected to my network via ethernet. GRBLWeb is a web server running on the Pi that serves up a webpage which allows me to jog the machine and send the gcode file over to the x-carve. Typically I do my CAD/CAM away from my workshop, save the gcode file on a tablet (or to a shared folder on the network), and use my tablet or smartphone to browse to the GRBLWeb page to send the file to the x-carve.

I am also using the X-Controller, which allows me to pause and restart the carve, as well as a “panic button”.

I’ve been playing with bCNC on a Pi 2. For a display I use iRDP on my iPad to remote wirelessly into the PI. The result is almost like running bCNC on the iPad. The portability is great.

This was the first mention of bCNC I’ve seen so I did a quick Google and found this thread:

bCNC and the Raspberry Pi

A few months ago, I spent a week or two testing out different GUIs that will run on the Raspberry Pi (RPi). These included: Universal Gcode Sender...

Very cool description of bCNC and some stress tests with different gcode senders on the raspberry pi!

I have a working setup with a node based software called cnc.js on a Pi 3. It works very well sans PC and has a really nice web interface. The full writeup I did is for the Shapeoko3 but the same can be done for XCarve: http://community.carbide3d.com/t/shapeoko-3-xxl-raspberry-pi-3-cncjs-tablet/2458