Carve new parts to the X-carve

Hi, Im almost done building my X-carve 1000mm and im already thinking of how I can improve it =)

I was thinking about making my own Makerslide end plates a little longer so the router gets more space to work on. I have found the 3d-design of the end plate on GrabCAD. But… how the h*ll do I get the 3D design into Easel or illustrator?

I looked and was surprised there was not already an official project in the Upgrade section for this. I am working on my own. Here is the SVG of the original end plate I made. Maybe it will help.

Edit: the forum is converting it to a PNG… let me upload it as a zip.

A few people have done them, but only posted in the forum about it.

It solves my problem, but not the question

Here is another option if you would rather add height to your x-axis end plates. I believe this would be more stable, but the real reason I did this is because my rails are mounted directly to my surface so I had no choice. The motors and pulleys stay where they are. The x-axis holes are elevated and centered. The base of these plates is slightly larger. This was carved from 1/4" 6061. If you want an SVG, let me know (I don’t use Easel). (FYI - JUST UPDATED PICTURE BELOW TO MATCH SVG FILE). 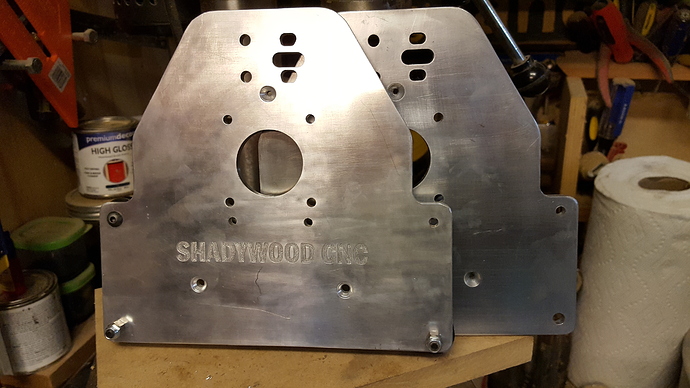 Yes please on the STL, I’ve been creating my own and failing miserably… I’m trying to create in Easel so I can share out for everyone.

I can do SVG - which I believe can be imported into Easel. Is that cool? Or would your prefer v-carve or DXF? Also, don’t forget to delete the .txt at the end.

IMPORTANT NOTES: File is set up for inches. My Makerslide Adjustment slots are designed for m6 (6mm bolts). Also, I used 1/8" peck drilling on all circular holes and finished them manually (faster). But they should (with the exception of the little drag chain holes and slots) be the right dimension and in the right spots. The three chamfered holes you see in the pic above were milled first for material hold down (no tabs). I put another in the center of the stepper hole to hold that piece. I milled this using a pocket 140% the width of my bit like @AaronMatthews mentions above.

Vcarve would be better actually. It’s my tool of choice.

Thanks for the file!

Here you go. Same notes apply. There are two different designs in here, plus all my tool paths and settings, plus a bonus cross section of a double makerslide and a Nema 24 square. You might consider using this square and milling a 61 x 61mm pocket for your stepper so it is inset 1/8" That way, you might not have to adjust your stepper pulley at all!

Answer to your question is simple. Take it slow. You have way to go. You must master your new machine, go over every posts on this forum to make your system work flawlessly first. Many people in this forum didn’t even try aluminum projects at least 6 months after first build. I say it’s too early for upgrade options. Let us see what you’re doing first, simple projects, clean pockets, sharp edge cuts, perfect circles and many more. I’m sure you will have plenty enough questions for each and every problems you’ll face. I hope this doesn’t give you any negative impact, just take it easy.

Thanks for your input. Tho I dont agree with you, ill listen to what you say =)

Yepp, ill have about 1000 questions at the end of this “ride” =), and this is only one of them…
I have some basic skills about hardware, milling skills and so on, but the software and “how” to translate 3D to 2D/Easel is one thing thats quite important for (what I think) all of us to know about.
The more you know “how” to make stuff, the easier it is to learn how it works in the bigger picture. Dont get me wrong, Im not willing to take to much water over my head

But milling in aluminium is only one thing of 1000 that I will try to do, and if I fail, I learn from it and make it better next time (maybe).

@AlanDavis, according to Google, this passage translated from Millenial to English reads:

ill listen to what you say =)

History repeats itself, there is no miracles when disester happens. This is gonna be fun watching.

It solves my problem, but not the question

You mentioned a 3D version. Would that be a STL file? Or a sketchup?
I don’t know sketchup, there may be a way to export out of it a 2D curve ether as svg or dxf?

You can’t import a 3d file into Easel as easel only does 2.5D (2d with different heights)

You need a different software to generate g-code for 3D carve. There are several. (there should be a few threads on software)

I grabbed the PDF and used inkscape to trace it, then imported that.

I used to use tinkercad to “Flatten” a object by exporting it a SVG (just the part that intersects the 0 z plain) It is crude but worked. (I now use VCarve that has an outline curve function)

As for more info on cutting your own plates you can see my attempts in this thread: Gantry Upgrade to C-Beam

I use V-Carve to import 3d models and can then turn them into 2d profiles or export them to SVG which can be imported into Easel. Problem is, V-Carve is not free. However, if you have something you found that you want turned into an SVG, if you post it, many of us will perform that task for you until you get your software.