So this isn’t the worlds most complicated project, but given that the Carvey wasteboard is also the fixing board, I wanted to keep it as pristine as possible for as long as possible. I couldnt find one that someone had already done, so figured I’d share this one - it’s a simple cutout of the fastening posts as a project file, so you have access to bind your project to the machine without running the risk of cutting into the supplied wasteboard.

The project is here

One think worth noting is that (for me, at least) Easel didn’t lift the drill bit sufficiently to clear the hold-down bracket I’d placed between the rightmost two cutouts, and drove the bit straight through (well halfway through, I hit pause pretty quickly!) the bracket. I’ve mentioned it to them in the ‘contact us’ thing at the end, but for the time being, make sure your tool path is uncluttered 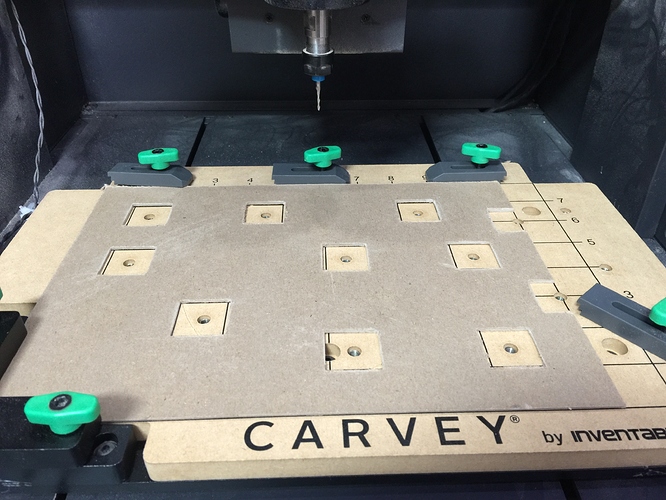 The material I’ve used so far for backing stuff like this is Chipboard from Amazon which is about $0.25 each. It’s only 0.05" thick, it’s pretty much thick cardboard; it’s not that long-lasted though, so I may move to 0.25" plywood or something similar.

My machine wont ship for another 2-3 weeks.
But I was thinking about a piece of hardboard for protection.

That’s what I started using after I chopped up my Misumi extrusion bed.

The hardboard sits underneath the work piece, so the smart clamp measures its zero-point at the combined height of the hardboard and the work-piece, but only cuts to the depth of the work-piece. At least, that’s how it seems to work for me