Catastrophic Failure - Trying to figure out What Happened 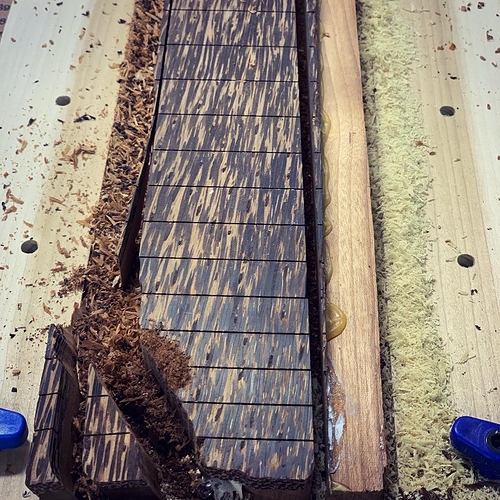 I’ve been using X-Carve for mostly guitar related stuff. I do my design in Fusion 360 and use UGS as my sender.

Recently, I had a carve go totally crazy. And I’m trying to figure out what happened.

Visually it looks like the machine jogged an inch to the right and then proceded to take a full depth pasess through my stock and the fixture after that. Then it jogged even further to the right and did it again.

But I can’t figure out why.

I’ve been through the gcode file. And I’ve run it twice now just letting it carve air. I haven’t been able to recreate the crazy result yet.

The bit went through the end of the metal rod that lives in the neck. So with that and the wood it’s looking like this was close to a $100 boo boo. I’d like to not have that happen again.

Can you tell where it originally lost steps? Maybe you hit a clamp or something?
Once it loses position, things typically can only get worse.

If you have pulleys with set screws, I’d check those too.

Unfortunately I haven’t been able to figure out exactly where it got off course.

That’s a good idea on the tune up. Maybe the x belt tension slipped into a new position and now that it has resettled it looks like everything is fine. I have a new belt I’ve been meaning to put on the x for awhile.

It’s frustrating because this is my first issue where I’ve been unable to reproduce the issue/take corrective action.

I’ve found historically that 99% of the issues I’ve had are my doing. But this one is still a mystery to me.

SOMETHING caused the machine to lose position. Could have been a mechanical issue, but it could have been something like a weird knot or grain difference in the wood, a dulling endmill, a shift in the workpiece, etc.

Exactly! Something went wrong for sure!

I’ve never had grain issue push the bit that far out of path. I tend to take very conservative passes as I prioritize finish quality over time.

It has me super squeamish because right now the evidence I’ve had tells me that it was a meltdown with the sender or the controller.

Hmm… I should put some more time into trying to find a mechanical explanation for it. I’d really love to find one.

First of all I should say that I’ve experience glitches with both mach3 on one cnc router and Grbl with the X carve. Sometimes an old computer dedicated to just the cnc router isn’t all its cracked up to be. They are old. I just ruined a one piece body blank the other day when somewhere I lost steps with Mach3 and the router moved over 1/2". Now my one piece body will become a two piece body.

On the X carve, my laptop sent a windows update notice, and that messed with the carve. I keep the laptop on airplane mode now and try to get all the updates taken care of before I do anything that can get messed up. I’ve found that doing a perimeter cut first before anything else clears out a path for the cutter when doing a neck carve too. Basically I try and use the 3D program just on the neck shaft and transitions only. I use 2.5 D on the perimeter, peghead holes, and truss rod rout. This speeds up the process and simplifies the Gcode because I’m running multiple programs instead of one huge one.

Interesting thought about pourposly splitting your work into smaller files.

I’m fortunate enough to be running a new i7 equipped windows machine that has never been used for anything other than the CNC. That said, windows update is THE WORST. And with Windows 10 you can never really turn it off all the way.

I do have a Linux Mint partition but it doesn’t play nice with UGS. Someone on the forum suggested CNCJS to me but I haven’t had time to start playing with that yet.

I know it’s a little silly to try to buy one’s way out of problems… but this kinda stuff sure makes some of the fancier machines I’ve been looking at all the more tempting. I make enough mistakes on my own.

but this kinda stuff sure makes some of the fancier machines I’ve been looking at all the more tempting. I make enough mistakes on my own.