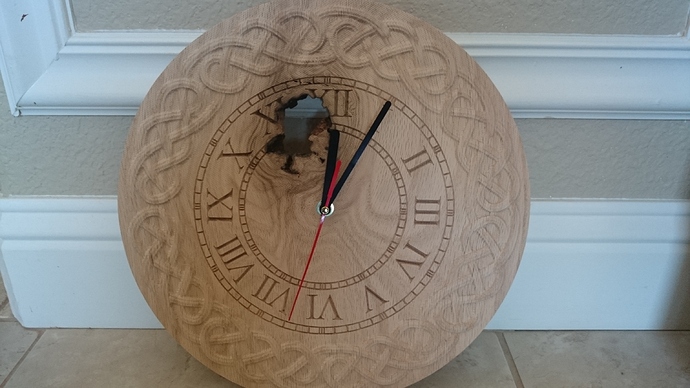 Since the wood was so thick, I had to cut a pocket for the clock mechanism to sit in so that I could get enough of the movement post to stick through.

Nice, where did you get the pattern from?

A knot hole is a matter of taste, I like my clockfaces to be clean, but i suppose i am old fashioned

Nice I think the knot is perfect and in the right spot. I really like the pattern as well

I got the pattern from the Vectric library, weave #32-iii. I meant for the knot hole to be closer to center, but now that it cut out the way it did, I’m starting to like it more as is.

For the pedants, if you look at lots of traditional clocks, you’ll also find the number 4 is usually “IIII” instead of “IV”.

Apparently King someone-or-other liked the numbering done this way, and so it became the norm.

I really like the knot location actually, makes it more of a ‘one off’ piece, to each their own I suppose. Please do post the final version when it’s complete.

As a matter of interest, are you selling this piece or are you just playing around/doing it for a friend? Not interested in buying, more interested in he motivation behind it

Thanks for the feedback guys. In the end, I’ll attempt to sell some clocks, although I am sure family members will put in orders as well…this one might end up staying in my house since it is unique, but I’ll have to confer with my CEO (wife) on what she would like to do with it.

I should have pictures of the finished product to post tomorrow.

Here’s the finished product…used black paint for the numerals/clock markings and golden oak stain on everything else, and a couple thick coats of spray on poly. 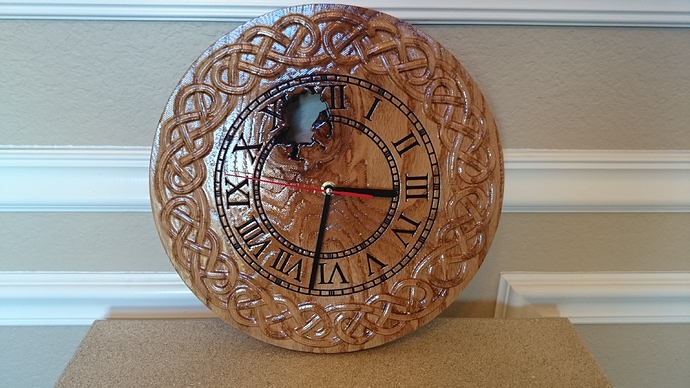 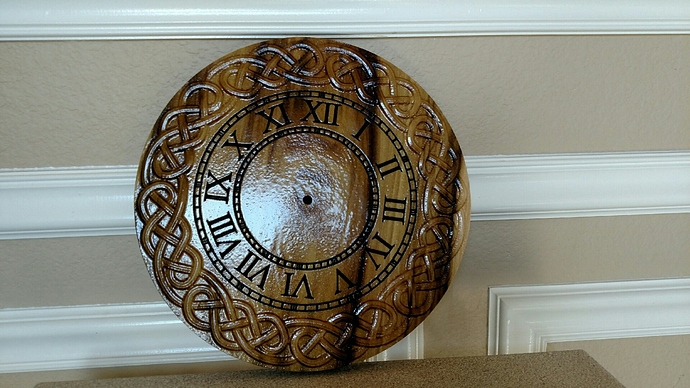 Poplar clock.JPG1920×1080 693 KB
It came out fairly nice, especially with the poplar coloring, although I had some tear out on some of the finer details, and then after spraying the poly, the grain raised up making it look bumpy. Of course I didn’t really notice it until after a couple coats of poly, so I wasn’t able to sand all of it down.
2 Likes