I hope it’s not in poor taste to post this here, but I’ve been on the waiting list for the Maslow CNC machine for about a year now. I think it complements the XC nicely as it’s designed to handle full sheets of plywood and I certainly can’t afford CNCRouterparts’ 48x96.

Anyway, this guy has carved out all the parts for putting a 12’ sailboat together. It’s a Bolger Bobcat, which is a very nice little daysailer and has been on my short list to build. He took paper plans and generated CAD drawings from them, which is something I’ve done in the past.

Even though the XC would have its own set of challenges to carve out 8’ long parts, it’s certainly doable with the tiling methods discussed previously. You could get several planks nested nicely on a 31" wide sheet, or if you’re into symmetry (OCD like me), a 24" wide sheet.

I posted this on my boat building forum and of course got the usual mix of “why” & “why not” comments. Just thought I’d share it here since it has to do with digital fabrication.

Yep, it’s a pretty low-tech solution, but I guess it works. They’ve been making remarkable incremental improvements since they shipped their first batch. Being open-source, they’re getting a lot of development from the customers. The router sled is now attached to the chains either by a sliding ring setup or a parallel linkage, which automatically keeps the router bit centered. Either way, it’s a powerful tool if I start building boats and teardrop campers on commission.

last I was watching about it the center of the board is the most accurate. As you get to the outsides the tolerances get a bit wacky. it is a neat machine though

Surprised that it gives useful accuracy

I guess it is relative. For “stitch & glue” boat construction tolerances with in 1/4" is usually acceptable. You can cut out the main members with a jig or circular saw. That is one of the beauties of building that way. It is fast and easy yet very strong when completed. I have built 3 boats - 8’ ,18’ and 29’. The 18 was stitch & glue. My problem was that I became very allergic to epoxy resin and with that type of construction you use a lot of epoxy. 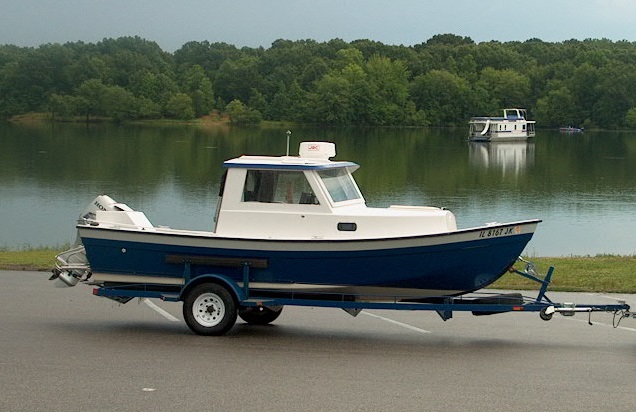 That’s a really nice boat! I too have developed a reaction to at least West System epoxy (which is unfortunate because I work at West Marine), so I’m switching to MAS. It all started with the 2-part plastic I put on the foam Iron Man costume I made a few years ago. I used to be the project manager for a company that makes 26’ sport fishing boats in the PNW.

My epoxy sensitivity started about half way through this project and was BAD! I was using resin form Glen-L. Poison Ivy like rash on my hands and forearms. Itched like crazy! Face swelled and got big red blotches. Eye lids dried out, cracked and bled. My skin became very sensitive to the sun and I burned very easy. I looked like elephant man! What a mess.

Ten years later I tried I built the 29’ but used MAS. It was frame construction so not nearly the concentration of epoxy although the entire exterior was coated with it. For me MAS was much better but I still had to be very careful. My problem was not through skin contact but rather the fumes off gassed. Organic respirator helped. Also, always ran a big high volume pedestal fan blowing right on me at all times. Once the resin was on I left the shop and did not return for at least 24 hours. Had a large exhaust fan in the shop wall that ran continuously for at least a week after any epoxy work was done. Had to get rid of the fumes are I would breakout again.

Epoxy is great stuff but for some can become somewhat toxic. Everyone should handle it with care. Again I wasn’t allergic at first but it continued use set me off.