My carve was going along nicely and I stepped out into the house for dinner for about 30 minutes and low and behold my DeWalt was sitting on the surface of my project having burrowed all the way down. When I tried to raise the router, the threads just spun and nothing happened. I manually raised it up and when my hand left the router, it just slid all the way back down again.

I slowly began disassembling things to try to figure out what went wrong. I’ve cut with this exact same .crv file before so I’m pretty confident there is nothing wacky in it. It appears something gave out in the z-axis to prevent it from holding it’s height. Since I didn’t actually see it go wrong, I can’t say for sure it was a z-axis failure. My plunge rate for the project was set at 35.

Here are some pics… 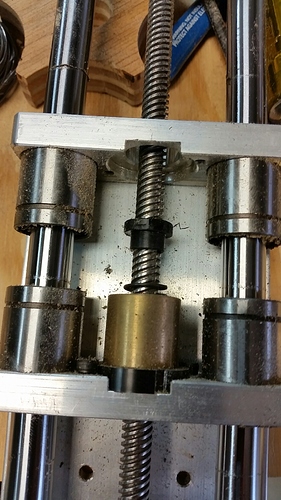 This looks like the mechanism that rides up and down the threads came apart and explains why it won’t stay up anymore. I’m tempted to epoxy it back into the gold housing and see if it will still work, but am afraid it will fail at another point in the future. 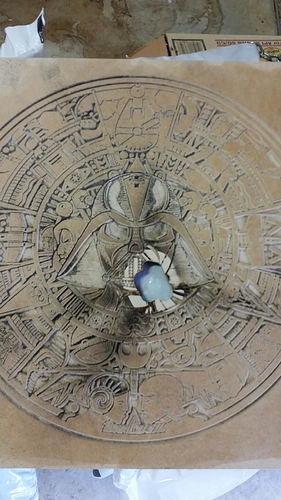 This is where the failure happened. It was near the end of the project and max depth was .125".

I’m not quite sure what to do now… I got the z-axis at Christmas and it has performed well for about 15-20 small projects. I’m not going back to the stock z-axis, that’s for sure.

I’m not sure whether to try to fix this or get another one?

I had a similar issue with my z axis too, mine is not from cnc4newbie but the nut is similar. I had make an error in my gcode (I use mach3) and the Z axis plunge straight in the material!! The threads in the nut have been pulled out!! I replaced it with a new nut.

every time my eyes see Cnc4newbies my brain sees Canabis…

Pretty sure the were a few puffs of smoke too, at least on this particular carve

I’m not sure whether to try to fix this or get another one?

If you can get your hand on some Delrin/POM you could make your own screw block, it really isn’t that hard.
Just make it into a good size for your carriage.

See this video for reference, I have done this on mine and they hold up very well and it practically without backlash.

I did have a spare ACME rod that I cut down to make the ACME tap.

Cnc4newbies responded to my email and are sending a nut replacement kit free of charge (I pay shipping). They responded to my email within a few hours and I am pleased with their customer support. I simply stated what happened, sent the picture and asked for their advice. It’s really nice to see a company stand behind their product!

I got my replacement parts and now my z-axis seems to be working again! I was able to do a successful test v-carve.

I’m wondering if the ability for the nut to strip is some kind of safety mechanism to prevent greater, more expensive damage?

My reasons were twofold,

1 - I was having some slipping problems with the belt that drove the z-axis when doing 3d carves. 3D carves are different in that there is a LOT of travel on z-axis and due to the nature of the carves, they typically remove small pieces of material so the reduced bit loading allows you run at at faster speed (many 3D carves can take an insane amount of time). The faster speeds mean there is more torque on the drive system thus causing the belt to slip. It was “skipping” steps and the zero level would get out of kilter during a carve and would gradually start getting deeper with each pass.

2 - Overall speed as stated above but from a different perspective… The slower speed results in longer carves, thus unnecessary run time for the spindle. When you watch a carve, there is a lot of Z axis travel to get to the “safe” height so the head can move around. Many toolpaths will have lots of these thus increasing the time to carve. When I went to the new Z axis and was able to speed things up, I sat there saying “Woah, Dude!” at how much more efficient and smooth the movements were.

fast travel is required for long distances to get there faster.

In helping people get their machines running I encountered two machines in two years that had the M8 threaded rod installed.

The point was, it was offered and it did work so there would never ever be a reason why you would change it.

Hi Mark T. another nick name!! Only one post and it’s here:) your post is liked by Mark7 who have been kicked out from this topic!!

Fast travel is for more torque and carving at high speed!

Sounds like you know an awful lot about the mechanics especially for a 7 hour forum member. Which z Axis would you recommend hmmmm

Electric motors produce the same torque from 0 to 100% Of rated speed
, so fast or slow , same torque 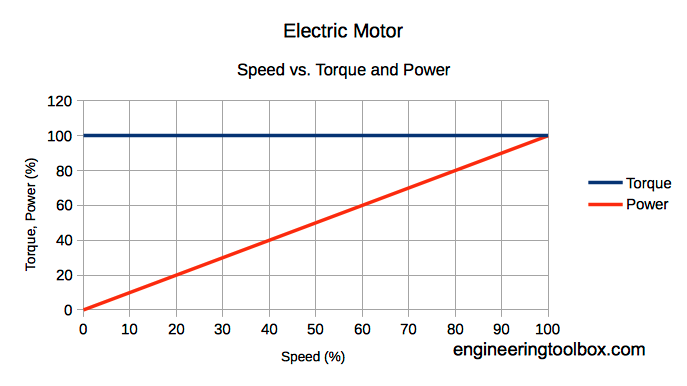 after reading posts below, ill eat my hat

Also, the rated speed has been reached at 3500rpm where torque is still near 100% its only when its oversped and doesnt make anymore power that torque falls away, ?

Torque falls off with higher RPMs on a stepper.

not MHO but the reality!

Its just hilarious…
Guys have some fun…

We’re going to close out this thread as it looks like the original question was answered.