Over the weekend, I had a chance to do a fun project in a new medium— a 14" square concrete tile of the Facebook “f” logo.

I’ve heard there’s concrete router bits out there for industrial routers, but definitely didn’t want to try that on an X-Carve. Instead, I decided to make the tile in plywood, cast a polyurethane rubber mold around it, and then pour concrete into the rubber mold.

That turned out to be an expensive, goopy disaster. Polyurethane rubber isn’t cheap, and I made a lot of mistakes my first time working it. Fortunately, the plywood tile came out quite nicely and was still usable: 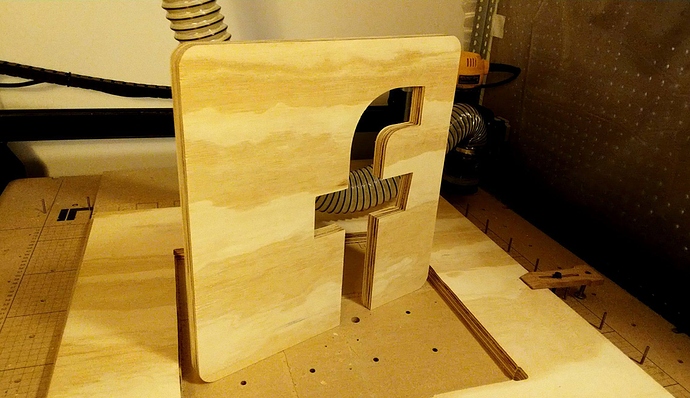 For the next go, I decided to just make the concrete form out of plywood entirely. I used some scrap 3/4" ply, and a 1/8" carving bit with a slight angle— the idea being that tapered walls would make the plywood form easier to remove.

After cutting the form, we mixed some of this Shapecrete concrete mix. In retrospect, probably any decent concrete mix would have worked for this: 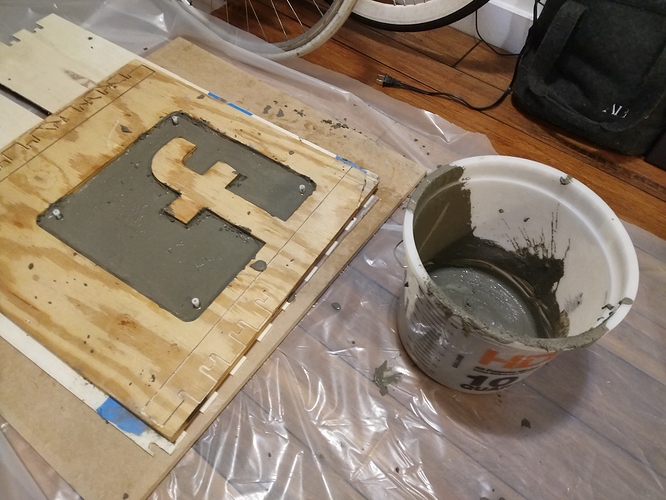 Again, my first attempt with this failed. The problem was in removing the plywood form after the concrete cured. Instead of pulling away the form, I tried to push the concrete tile out of it. This ended it with it cracking around its weak points.

For the second attempt, I just used a circular saw to cut the form down to the point where it was thin enough to just pull away or, in the case of the “f”, pound out: 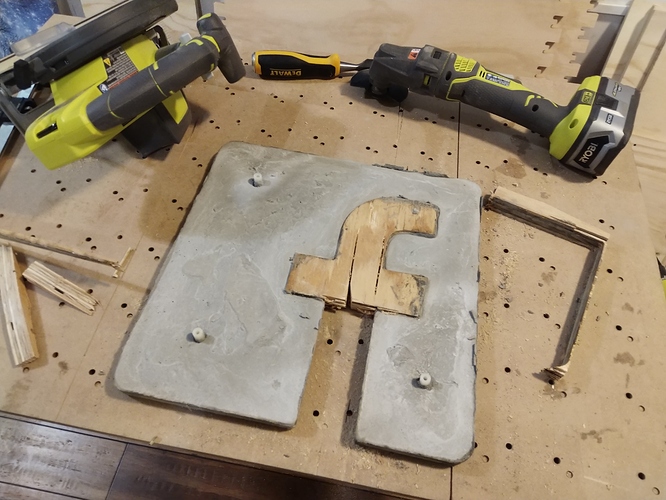 For anybody trying to do a project like this, I would recommend having your initial plywood form just be a silhouette with thin walls. That way you won’t have to cut it down or carve it out like I did.

Here’s the finished product, which came out quite nicely: 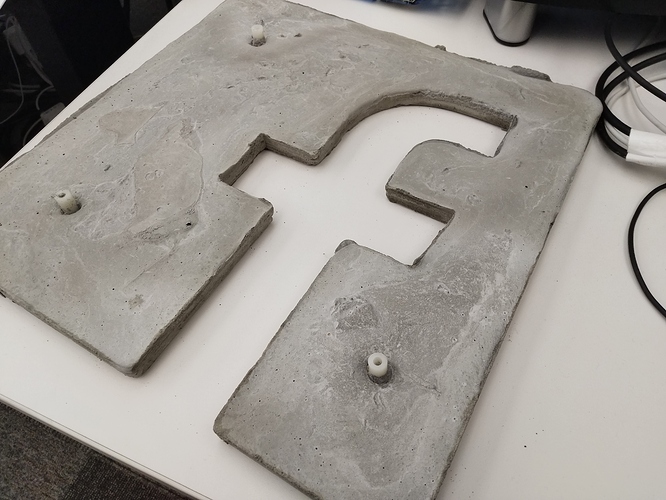 I tried canola oil. Unfortunately my local Home Depot didn’t have any release agent, but I’ll try to get some for next time.

I have previously done similar types of things with wood and rubber forms. Just make sure the plywood walls do not over hang at all and use a release agent like the others said. I just use Carnauba car wax and stuff always pops put easily. Only problem is that some wax will come off with concrete. I had various bricks made before but then just used a grinder to knock off the shiny parts. It worked out because it actually made them all look different rather then copies.

Unfortunately my local Home Depot didn’t have any release agent, but I’ll try to get some for next time.

Try a hobby store or a place that sells plastics (like Tap plastics).

The concrete guy I know uses motor oil on his forms.

The concrete guy I know uses motor oil on his forms.

I heard about that as an option. Apparently diesel works too? Might try that next time instead of canola oil.

Here’s the final result of this entire project! The plywood “f” was done on the X-Carve, the concrete tile was done as described above, and the large MDF backer board was done on ShopBot: 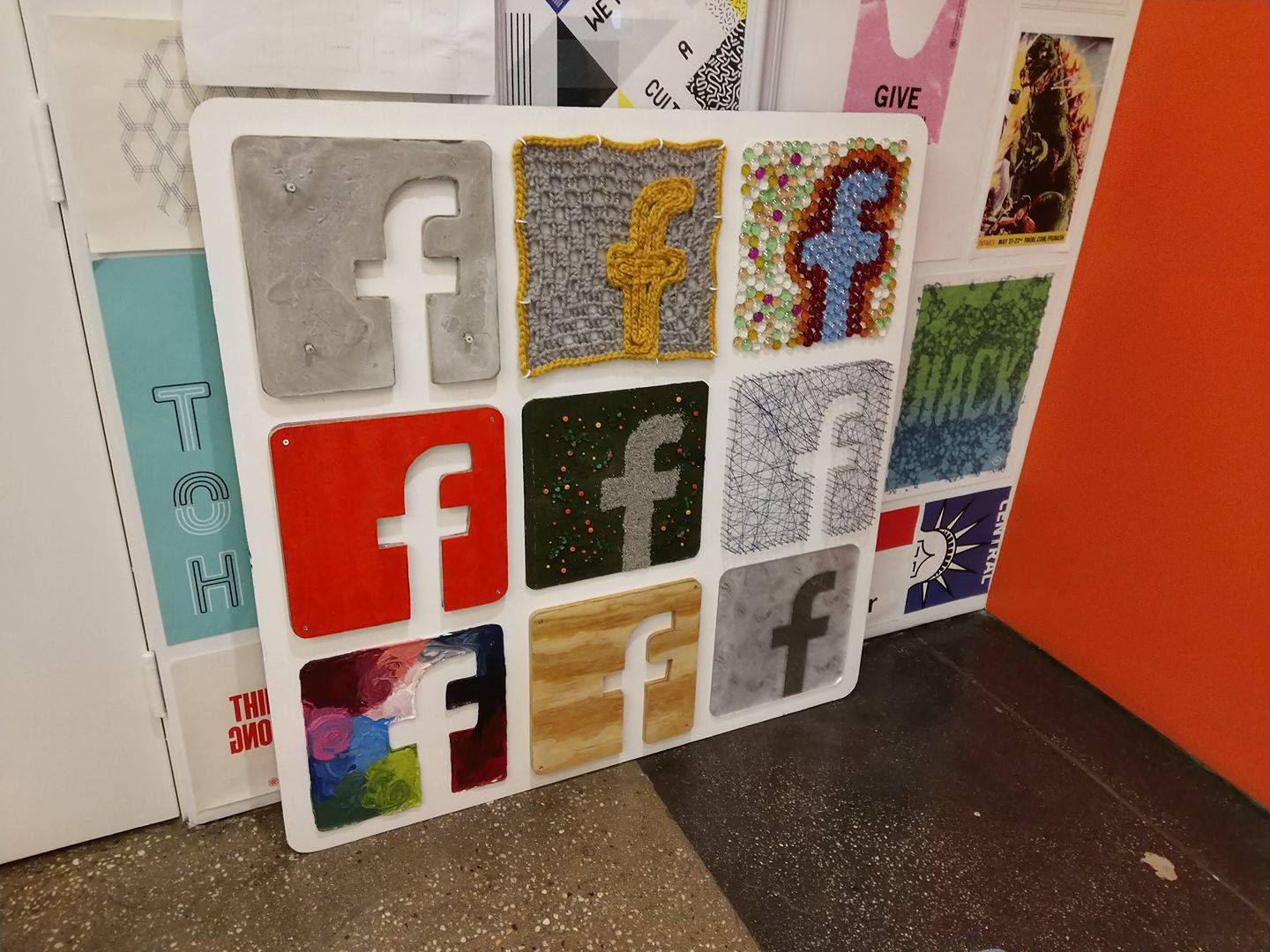 Honestly I think the coolest one is the bottom right corner, which was done by CNC-laser etching a mirror

next time you try, try machining a high density non flexible foam. It will want to rise so secure it down so it can’t float and then breaks out easily and depending on the foam use thinners or alternative to eat the remaining foam away (only once the concrete is dry)

Interesting approach. Do you have any product or brand names for that kind of foam that you recommend? 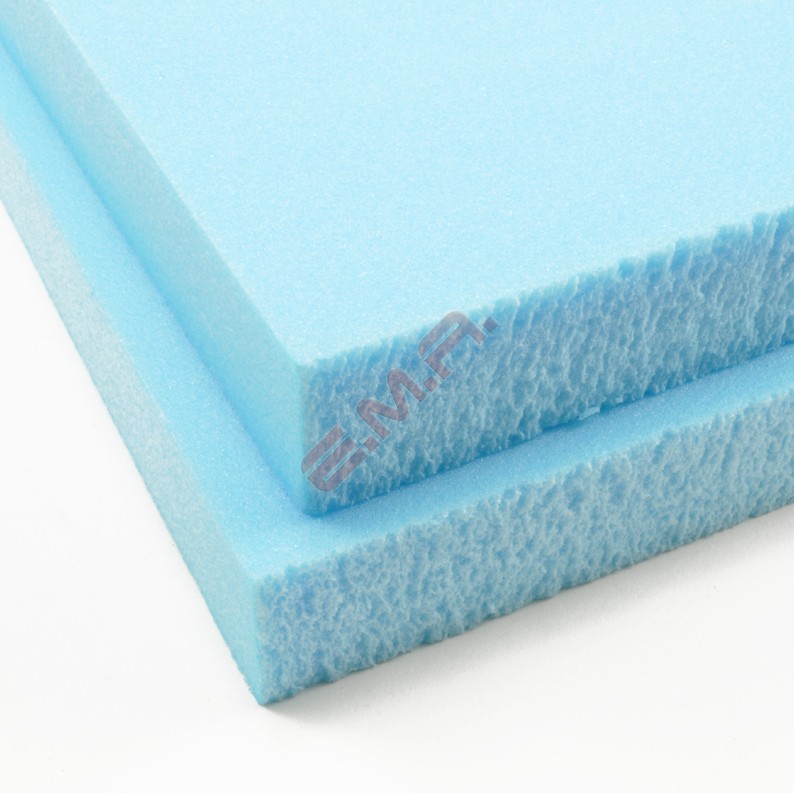 I’d say your project turned out very well!! Your method was spot on…wood and concrete have a love/hate relationship.

For things of this nature I use both high density and low density (home depot foam insulation) foam to that I can just break off the pieces, and foam is more forgiving than wood. Use a compression bit to carve the foam and you won’s be disappointed. Cheers! Great finished piece!