I just came across this cool new reinvented CNC / 3D printer on KickStarter. I really like the way they have interchangeable heads for laser, cnc and 3D printing functions. It’s called the Snapmaker. At only $299 I might have to get one. You can check it out here; 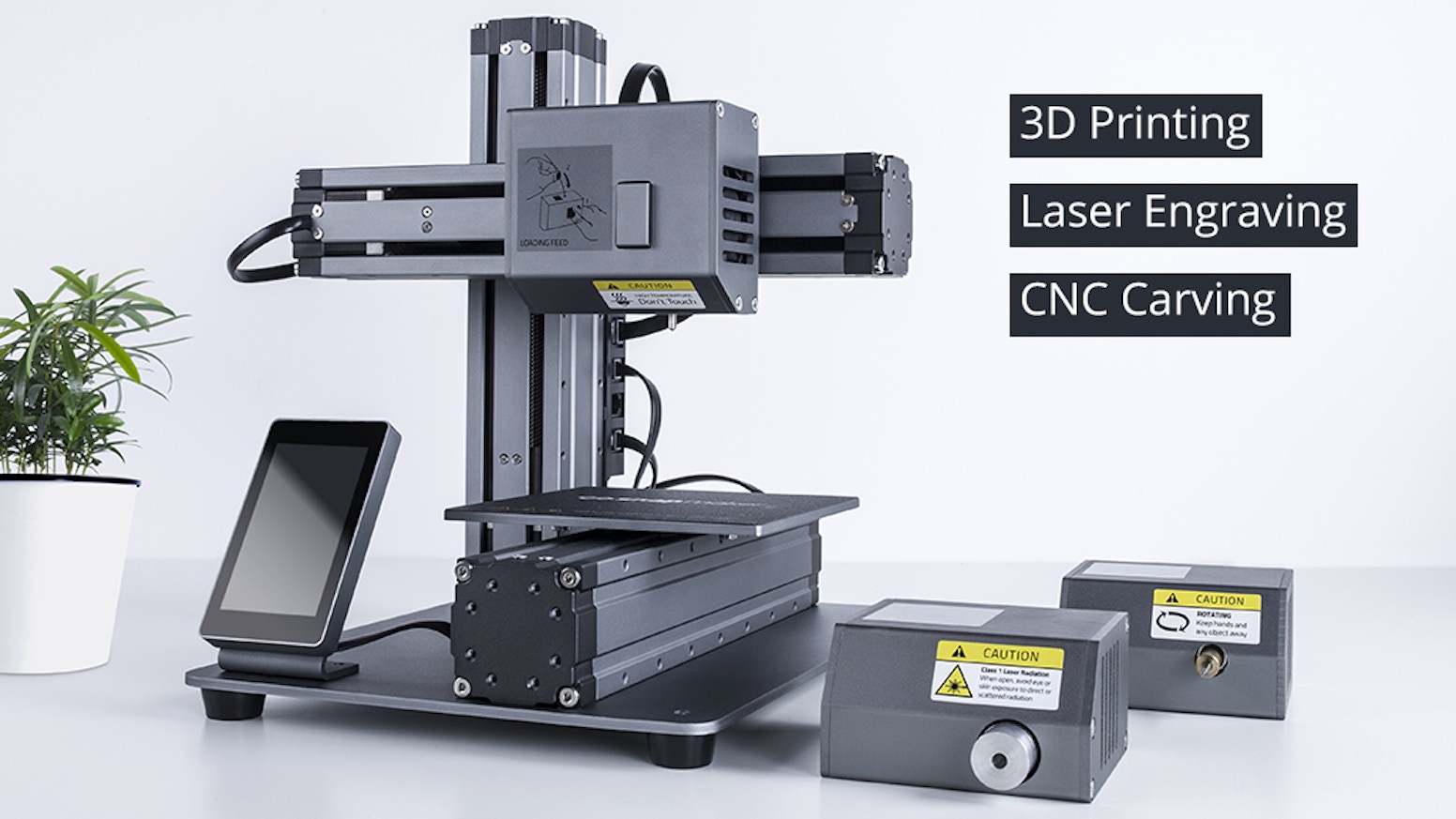 Turn your desktop into a workshop. You can easily do 3D printing, laser engraving and CNC carving.

What do you guys think? According to the company it can 3D print at a resolution as fine as a $1,000 3D printer does, but at 1/5th the price. I don’t see anyone using this as their main CNC machine, but for smaller projects (to keep the wear and tear down on the X-Carve) and for using a laser engraver or 3D printer this looks like a great idea.

Also, how hard would it be to add the 3D printing feature to the X-Carve?

I can see combining a laser and a CNC, but 3D printer and CNC just doesn’t make sense to me. The main reason is that 3D printers need to be very clean to work well and CNC’s make sawdust. I’ve got my CNC and cheap Chinese laser in my workshop, and my 3D printer in a cleaner space in the next room.

The main reason is that 3D printers need to be very clean to work well and CNC’s make sawdust.

I see your point Steve, perhaps I use my CNC differently than most people do. When I have completed a job I thoroughly clean the X-Carve and the surrounding area. When I am done there is no sawdust anywhere, and I’m ready for the next job. I see the X-Carve as a major investment and treat it as such. I try to maintain it as well as I can. Guess I’m a bit OCD when it comes to the X-Carve

Which one do you have, and are you happy with its performance?

This might sound weird but what do you do to clean your machine? Sorry if off topic, I try to use my shopvac but the hose is so big I can’t really get it in all the areas. Do you use a rag with some sort of cleaner for the rails?

I use a cotton ball with 91% isopropyl alcohol to clean my rails and v wheel grooves.

I’ve had people remark that my workshop is cleaner than their kitchens, but still it’s a place where I use sanders and saws like a bandsaw. I’m pretty crazy about dust collection and am a Festool fan, but it’s just not as dust free a place as the room I have my 3D printer in.

I’ve got a 2015 X-Carve 1000mm with the 2016 upgrades. A Makergear M2 3D printer with dual extruder upgrade. The K40 laser which I bought for $300 Sept/2016 which I’ve upgraded with a Smoothieboard controller - I’m still getting used to the toolpath for that one. Just this weekend I undertook a project to design a learning tool wheel in Fusion 360 in which I cut the plywood pieces on the X-Carve, then put the bottom piece in the laser to engrave the lettering. The tricky part is that I did the lettering in a Fusion 360 Sketch and used the CAM environment to generate the gcode for the laser using a Smoothie post processor I hacked up a bit to make it work, and also Fusion 360 kinda sucks in it’s ability to do text in a sketch, doesn’t have centering or multi-line text blocks.

My ultimate goal is to design something entirely in Fusion that has all three of CNC, laser, and 3D printed components. I realized after the fact that if I had 3D printed the knob on this instead of turning it out of a piece of dowel on the lathe I could have claimed victory on that goal this weekend. Now I just have to make the process a bit smoother. 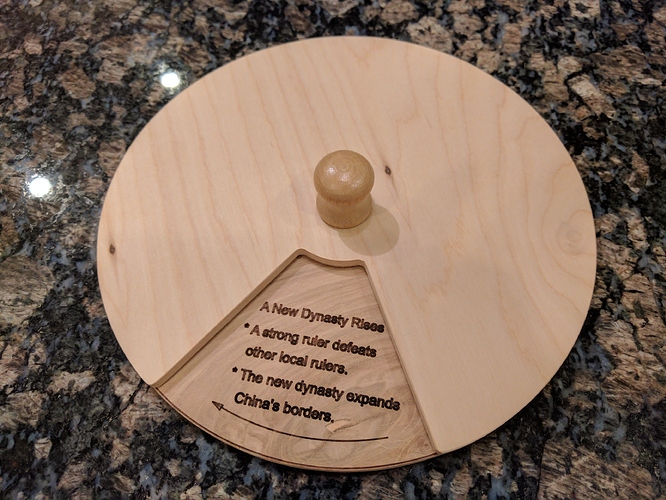 I need a 3D printer in my life.

I try to use my shopvac but the hose is so big I can’t really get it in all the areas. Do you use a rag with some sort of cleaner for the rails?

I have a large air compressor which makes quick work of most areas. Then I simply vacuum the floor. I used to use microfiber cloths but I have now switched to using Bamboo Washcloths as they are much softer (https://www.amazon.com/Motherhood-Collection-Washcloths-Natural-Sensitive/dp/B011J9BYC8/ref=sr_1_1_s_it?s=baby-products&ie=UTF8&qid=1490641167&sr=1-1&keywords=the%2Bmotherhood%2Bcollection&th=1). They don’t last long when you catch them on sharp corners, but they are fairly inexpensive. When its needed I use isopropyl alcohol on the rails. For cleaning and conditioning the wheels and belt I use MG Chemicals Rubber Renue every couple of months. A few parts of the machine will occasionally get a coat of Zaino Z-5 car wax from time to time. As a machine polish I will be trying Blue Magic 500-06 Metal Polish and Zaino Z-5 after I order a sample piece of Black Anodized MakerSlide for testing purposes.

I need a 3D printer in my life.

I have heard good things about the Tevo Tarantula. It’s around $200 and is getting good reviews for a budget machine. I am going to be picking one up hopefully soon. With a few small tweaks it becomes a nice first 3D printer.

The biggest drawback I see is the limited work area. Having separate machines dedicated to specific tasks allow you to do multiple things simultaneously. My $200 Prusa I3 clone and $300 K40 compliments my XCarve nicely.

Thanks for that! Ill try that and see how that goes!