I ran some roughing passes in some reclaimed pine today trying out some new speeds and DOC. The boards were old deck boards and had some cupping to them and some seemed a bit uneven for thickness but overall it worked pretty well. Had a little X chatter when going from right to left but not much at all. The SuckIt ran into a clamp screw on the first board and lost some Y steps and I had a clamp too far into the board on one of the boards so I cut the clamp some (but man it didn’t even hiccup on that clamp!). 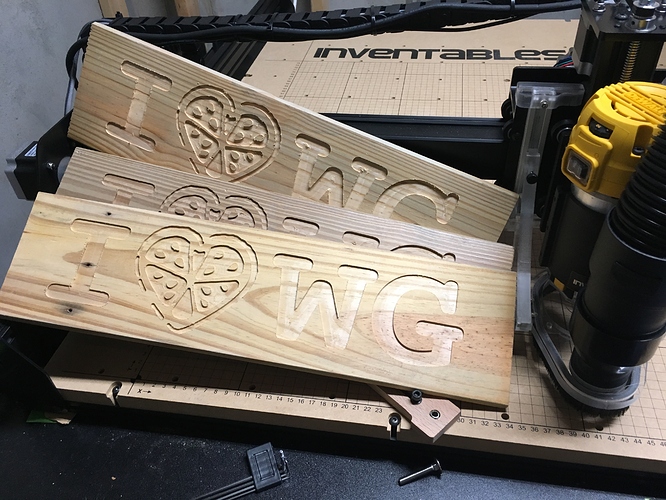 I’ve still got more to do with the 1/8" bit (this is design 1 of 4 that I’m doing) then switching to the 1/32" bit for detailed. I’m doing the detail in three passes (1/48" doc) so should avoid the chatter. I had to stop to start the BGE for smoking some chicken for dinner.

I recently went through and squared the machine using a digital protractor from work (0.01 accuracy at 0 degree). I had a 0.5 degree rotated X and about 0.3 degrees off level for X and Y. The rails were about 0.1 degrees off parallel from the wasteboard. The difference in cut quality is amazing. I was getting ridges before and now they are essentially gone. I might still be a little off in the spindle perpendicular to the board but it’s incredibly small and I didn’t feel disassembling to correct it…I can live with it for most things that I do.