I’ve asked about this before and basically been told to use other software, but this just strikes me as odd… attached you will see a graphic of my project. the DXF was created as just a single set of concentric circles ID first, then OD… Import the DXF int Easel (pro) Copy 5 times… A is original, then the rest are in the order I pasted… E being the last one pasted… the numbers 1-10 are the order that the machine cut… no rhyme or reason… definitely not the most efficient pattern even if “A” didn’t cut the way I wanted it to, “B” should be exactly the same followed by “c” etc… 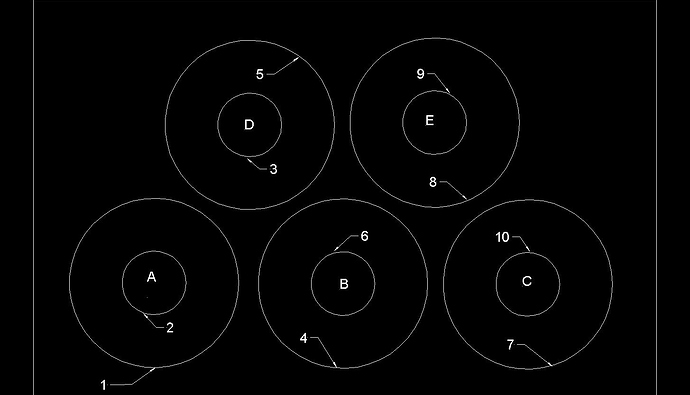 and to anyone who says, “oh just use this or that software” then why the hell am I PAYING to use easel?

this pic is a representation of the very next project I did… didn’t even close the browser… just file-new…created in exactly the same fashion as the previous…
the circles were slightly smaller, but the carve order was at least consistent. 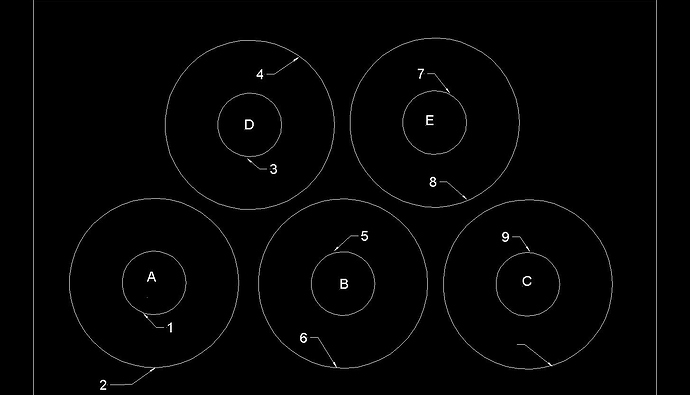 Easel toolpaths seem to me to be total insanity. I did a V-carve of a very curly SVG the other to try out an Easel pro free day and it literally went from side to side, do a little dib here, run over to the other side, later come back and re-dib where it was before, it’s just gruesome to watch.
With g-code from F-engrave for the same design there was a bit of back and forward, but nothing as crazy as Easel. Even for fairly simple designs it goes al over the place, do a bit in one pocket, jump over to start a different one, then go somewhere else.
In my case I don’t pay for the pro version, so it doesn’t actually upset me.

I’d like to see better optimization of of how the tool moves around on the workpiece and the order in which shapes are cut. I’ve noticed a lot of wasted time with G0 moves when it could just complete an entire area before moving. Here is an example: [TravelingSalesman] When the textured areas are being carved, it is constantly moving back and forth between the two areas wasting a huge amount of time. There is a proof of concept here: https://xyzbots.com:4000/gcode-optimizer/ for addressing t…