I’m planning to cut an aluminium panel to house instruments for a light aircraft. The aluminium is 2mm thick and consists of a number of 80mm and 58mm holes for the instruments.
My experience with aluminium in the past is that it needs to be kept clear of chips so that they don’t weld themselves to the cutter so I’m using a mist spray and suction to keep the path clear.
What would be the suggestion of the machine path to cut the holes? I was thinking that an adaptive clearing path to cut a 6mm ring on the inside of the hole to be cut (using a 3mm end mill cutter, multiple depths of 0.2mm). 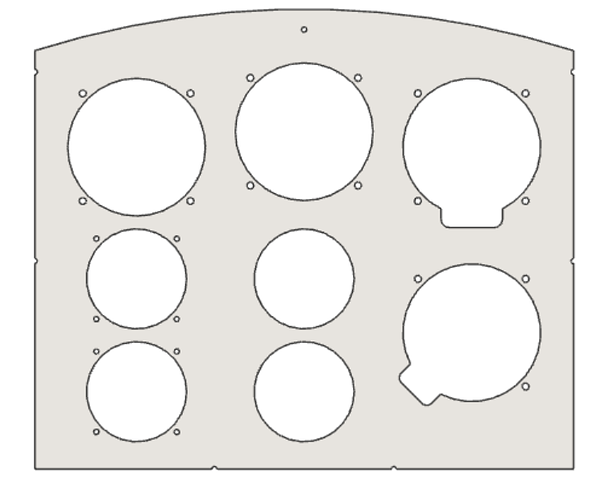 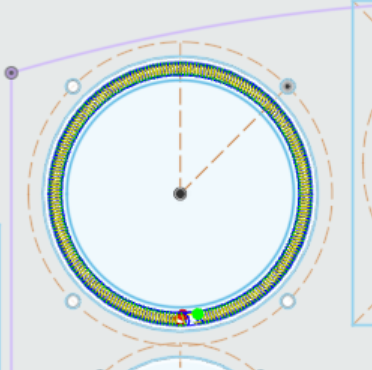 Is this the best way to approach this?

The adaptive approach is a good one, but cut deeper. You don’t want to destroy the bottom 0.2mm of your endmill.
I’d also come back with a full depth finishing pass, so keep a small radial stock to leave.

How deep do you reckon I could go?
Currently (not tried this yet), I’ve set DOC=0.2mm, RPM=24000, Cutting Feed Rate=1200mm/min
I’ve used the feed and speed calculator here as a guide http://micro100.hsmadvisor.com/

I wouldn’t recommend going any deeper than that. My X-Carve is pretty tight, and I usually don’t go more then 0.005" DPP/DOC on aluminum (that’s a smidge less than 0.2 mm).

Also, if you do the full-depth finishing pass, make sure you’re only leaving about ~0.05 mm or less radial stock, or you’ll end up binding and snapping that skinny bit.

Cheers, I’ll give it a go.
Do you have much success at milling aluminium?

If aluminum is your main work material, you’re going to be putting some serious time in. The machine is capable if it’s your option. As @Zach_Kaplan said, it’s all about the toolpaths. Here are some pics and video of a recent Aluminum/Carvey job. I ran this with a .125" spiral, single flute bit. Feed 250mm/min. Depth per pass was an experimental 3.5mm with an optimal load of 0.127mm. Generated in Fusion 360. I ended up stopping every once in a while to remove chips and, eventually, add so…

Climb.
Just take a smaller WOC or optimal load until you feel more comfortable. Faster feed is better, though. That’s where the Carvey is limited.

Here’s an old post with a cut on my Shapeoko, looks like I used conventional…I’d still go with climb if I did it again.

My adventures in aluminum milling Projects

4.2mm DOC, 0.6mm Optimal Load, 1250mm/min feed (ramped up some during cut) Here’s a similar one from the Carvey category (link to pics and videos in post): I’m no aluminum milling pro, but I’m learning that by having control over the toolpaths, these machines can do a lot.

How do I calculate the optimal load?
How slow is slow on your Dewalt?
Cheers

16K rpm for a Dewalt 611 on speed 1. The optimal load was from a Winson Moy/Carbide 3D video. He has “cutting recipes” in many of his videos. He had some aggressive adaptive paths after attending an Autodesk conference.

Are you running adaptive toolpaths or slotting?

“Slotting” (not adaptive). Considering how small a “bite” that needs to be taken with the X-Carve when using adaptive toolpaths, I’ve never had a project where it would have saved me any time.

X-Carve when using adaptive toolpaths, I’ve never had a project where it would have saved me any time.

I think most people are leaving some speed on the table with these hobby level machines. I say get that Dewalt off of 1 and crank up the feedrate. The width of cut will be smaller, but going full depth makes a big difference, especially on tool wear. If you pay for an inch of cutter and only use the bottom couple hundredths, you’re leaving that on the table as well.

If you pay for an inch of cutter and only use the bottom couple hundredths, you’re leaving that on the table as well.

I follow the methodology, but my previous statement meant that I have to keep each pass (even at full depth) so small, laterally (due to the inherent lack of overall rigidity in the X-Carve, and the fragility of the 1/8" bits I’m usually using), that I end up not saving any time compared to doing traditional “pocket clearing” at very shallow depths, but (comparatively) very high feed rates.

I found this the other day https://www.youtube.com/watch?v=SZ4QL64ZSyQ&feature=youtu.be
This says that Surface Speed for aluminium should be 45 M/M so my toolpath now looks like this (DOC = 2mm, adaptive toolpath)

Here is a chart I tend to use myself, my primary target here is feed per tooth
A 3mm tool => 0.025mm/tooth 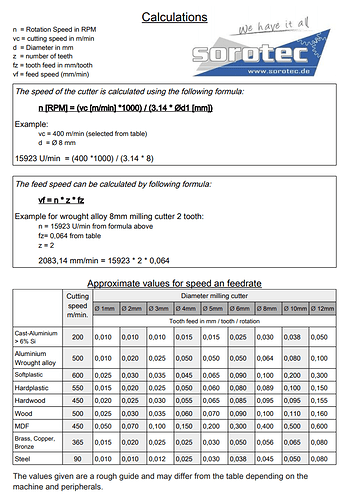 Thanks. I think I’ll go for this and see what happens 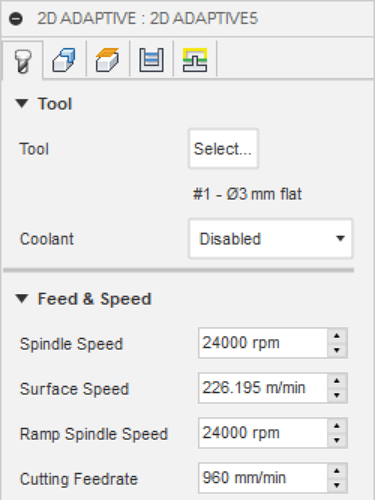 For slotting go easier and increase once a baseline is established.
For pockets use 2D Adaptive and try 2mm first, again increase as seen fit.

I did a test carve once, to find my machine “limit”.
9 equal pockets 25x10mm or so, with depth ranging from 1mm to 9mm.
Feed rate / RPM was equal for all, only DOC was different (1-9mm DOC)
Once the corners started to skew I had my max DOC with that configuration/material.