Cutting a hole in my wasteboard

Hi there. So I have just got my X carve and without going into the details want to cut a slot in my wasteboard. I want it to be around 700mm by 60mm and cut full depth to leave hole in the middle of the waste board. Two questions:

You can certainly cut into and through your wasteboard with an endmill of adequate length. Most 1/4" endmills would do the job.

It would be prudent to remember though, that there is aluminum cross bracing beneath the wasteboard that you are likely to encounter. That being said you would probably want to replace the bracing with something that would outline your new hole and then brace to the main supports.

Many thanks. The slot I’m cutting is parallel to the central frame so should be fine.

We re-arranged our crossbracing to allow for a similar hole while still providing rigidity. We also planned an opening in our (extremely thick) torsion box table top to allow for vertical clamping. We have a removable bit of wasteboard to cover the hole, but it’s removed in this pic (you can see it laying on the table in the background). 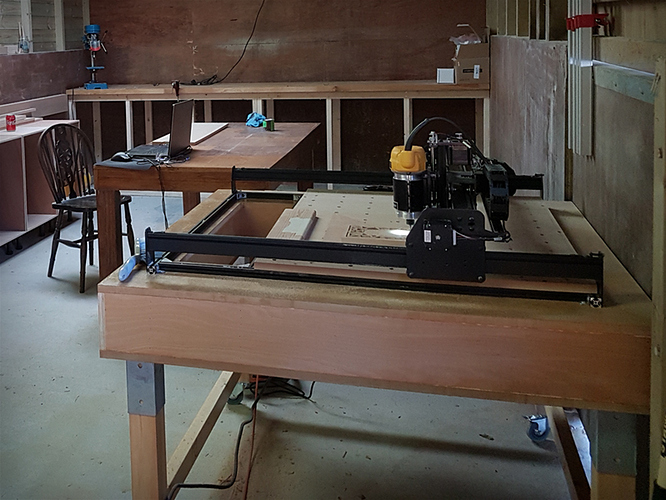 Please excuse our lack of tools and relative tidiness in this pic. We had only been in our new house for a few months when this was taken, so we didn’t have time to fill our workshop with junk and make it all “lived in” yet.

Thanks for this. I used two pieces for my table top so there is a slot underneath. I’m doing it enable vertical clamping too. I am putting a cross brace of 6x2 under the table in line with the slot so that I have something to clamp to. 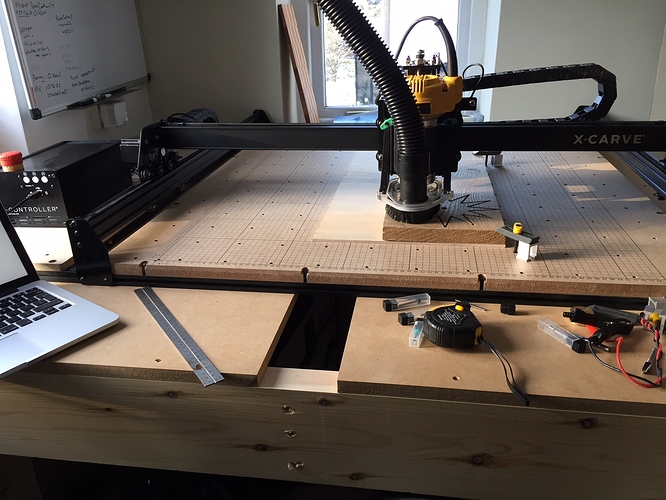 I would still remove the wasteboard after cutting and install additional extrusions to reinforce and add rigidity.

Worked great! Will strengthen the wasteboard as suggested and come up with a more user friendly (above table!) solution for clamping the workpiece. 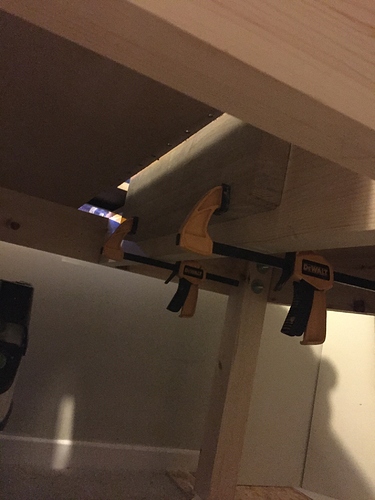 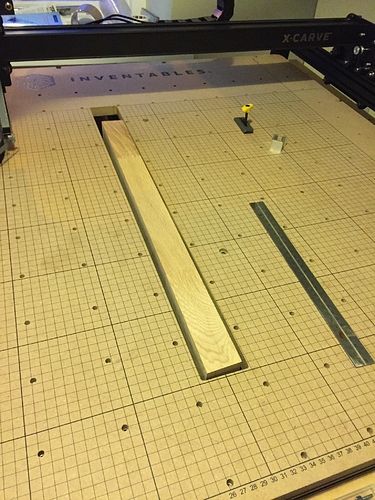 We drilled holes and put threaded inserts into the ‘wall’ of the opening that’s closest to the middle of our machine so we can clamp the piece just like we would on our wasteboard, but using more clamps to be sure it doesn’t fall.

Or you can probably also do what Angus said. In our case, the extrusion is set back just slightly from the hole in our table. We intentionally left a small ledge of table around to fully support our frame.

I think your set up will work well as I have a 6x2 cross piece for the table now flush with the opening. I will drill some inserts into it at 4cm intervals and attach some clamps. I’m trying to work out if a rack and pinion set up might be possible from above the table so I can easily adjust the height… but that might be overkill!

I’m not sure how anything could be set up from above the table without potentially being in the way of the tool path… Can you elaborate?

But you could do some kind of under-mounted/suspended or floor-standing platform to adjust the material height, and then clamp the piece to your cross piece to secure it/immobilize it.

Something along the lines of a router table lift with a detachable wrench that connects to a rack and pinion… which in turn is attached to a bracket/clamps that holds the piece.

Oh, of course! That would be quite handy, wouldn’t it? I’d be interested in seeing the result if you put something together.

What if you you had a crank handle on the front of your table, instead of going out the top, like the ones for raising and lowering table saw blades? Then you would never have to remove it or worry about it being in the way of your work.

Yes I guess it is although if you cut the end of the front off you would be going across the central extrusion. If you extended your gantry I guess no problem.

I put mine where it is because I didn’t want to interfere too much with the frame.

The rest of the thread here is about how to conveniently clamp the workpiece - which I guess is relevant wherever you decide to cut your wasteboard!

I was suggesting for @DaveEastham’s idea of a rack and pinion lift for his vertically-mounted workpiece, instead of the removable wrench coming out the top, like in a router table, he could do a crank handle coming out the front of his table, as on a table saw. We don’t have any sort of lift system for the workpiece in ours. We put threaded inserts into one of the faces of the opening in our table, and clamp to it.

But what you’re talking about, I think, is the opening, itself. Something more like what we have done here (this is from up above in the thread): Cutting a hole in my wasteboard except your table would be open in the front? So your table would have more of a U type shape with two ‘arms’ sticking out to support the X-Carve’s rails?.. Would you have cross-bracing between the extended part of the rails?