Success! It seems cutting carbon fiber is sort of hard to find specific information on. After just diving in and cutting it this weekend I can see it is not too bad. For this project I used 1mm bit and 2.4mm bit. Both at a 7mm/sec feed rate in my Dewalt 611. The 2.4mm bit could have been stepped up much higher.

I wore a dust mask and followed bit with vacuum. Still waiting on my dust shoe. 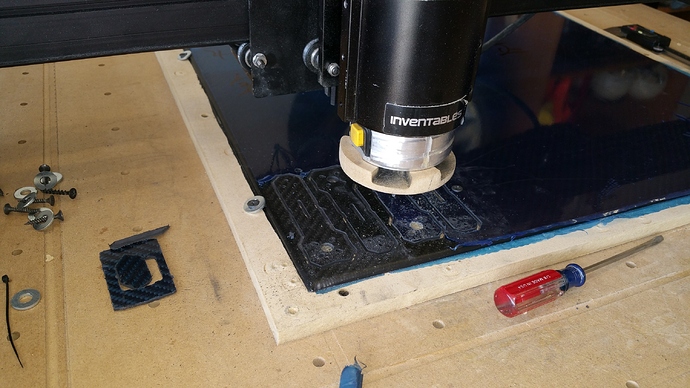 Nice. CF can be a pain or a pleasure to cut and never seems to be the same each time.

If you want to cut CF fast look at small abrasive bits rather than milling bits. E.g. Some of the cheap diamond encrusted cutting bits can be pushed through CF very quickly and leaves a very clean finish. Obviously the dust gets everywhere and is really bad for you.

@IanWatkins You wouldn’t happen to have a link to said bits would you? Sounds very similar to the ones I posted.

I found the coarse one didn’t really make a much worse finish than the fine one and could cut fairly quick (I don’t have my notes to hand but it was a sensible cutting speed).

They are rubbish for most things but they cut through CF and other composites very well. I’ve used them to “engrave” CF, cut small designs in CF and FR4 and do to do roughing cuts in CF, FR4 and G10. If they break, throw in the bin and forget about it.

The diamond burrs you link to are of course, just a diamond style burr but still carbide. Because you are trying to push these “breakers” through CF and pretty much only cutting the binder, you really do need to cut stupidly slowly with them. I’m actually surprised you managed to get anywhere with the 1mm ones as I think they would bind up pretty easily and break which is probably what happened to you.

Thank you. I will check these out. If anyone has any more tips I would greatly appreciate it.

Seconding what @IanWatkins said, the dust from CF is super bad for you. As a tip: some have found milling the CF while submerged in shallow water solves the issue. Double sided tape to the bottom of a shallow tray of water. 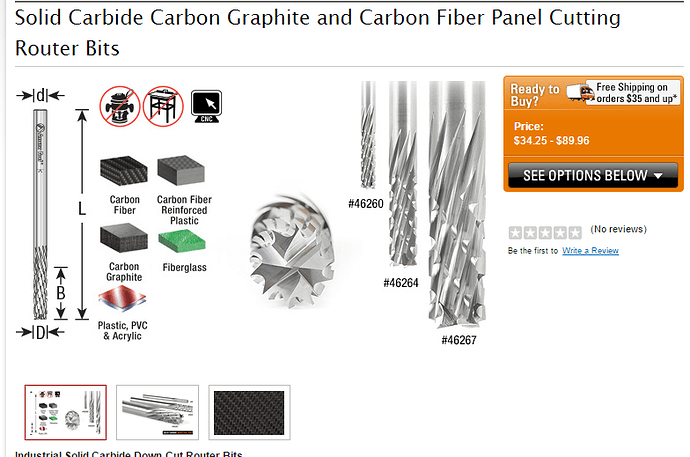 I’m all set to try this under water method tonight. I’m not sure which rates I should use but I was thinking something close to the aluminum settings in Easel. Any thoughts?

My first thoughts are that you make sure the surface to be milled and the waste surface underneath it are true and co planar to the travel of your gantry/tool head.

As far as feeds and speeds are concerned I would go shallow on the DOC and reasonably slow on the feed rate. Possibly start off tweeting it more like aluminum and then ramping up as you go. One thing to take into consideration is how you are securing your material and not to push so hard that the material comes loose.

Controlling milling dust is a great idea no-matter the material!! However, I was not able to find any study which confirmed that carbon fiber dust was particularly toxic or damaging. Do you know of some literature on the actual health risks of exposure?

I think if I were cutting CF a lot then I’d want to be pretty sure the dust isn’t getting into the air. Mainly because of lung disease.

There are other links to studies, but this one from OSHA probably covers the topic as well as others:

There are a few videos posted where they mill out a pocket in MDF, crazy glue the metal in place, then fill the pocket with oil so the metal is in a oil bath for the whole carve.