Can someone please tell me why this is not cutting to dimension correctly? As you can see in the pic the design is 4"x5" Yet after I cut the piece when i measure with calipers it is showing 3.725" x 4.733" I have attached the file. http://easel.inventables.com/projects/XehSEdOyhzNYYqE5qFexbg

I am using a 1/8 bit with an inside outline.

Secondly this may need a separate post but why does easel require that you make the line wider than the bit in order for it to mark it as the correct size bit? e.g. When I make a drawing with a 1/8 size cut around the part it says it say the 1/8 bit is too small and I end up having to make the drawing line larger than 1/8 wide to get it to accept the bit size,

This happens on all cut setting regardless of choosing Fill, or Inside, 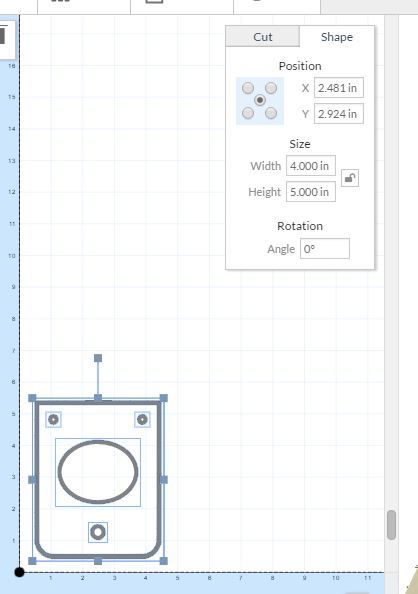 Yeah , Easel is a pain in the neck to put it nicely. I spent 12 hours trying to get a simple “filled” circle to cut the right size. It worked with Fengrave but not Easel. Since it worked on the same file in Fengrave, my steps/mm and bit size were all correct. Frustrating. I give up on Easel!!!

+1 - I think it’s just an Easel bug. I’ve had multiple cases where “simple” layouts on the screen resulted in something completely unusable in real life. I’ve also had issues where I create 3 boxes, with identical spacing between each, but upon cutting the spacing is completely different… there’s a math error somewhere.

I’ve abandoned Easel for the “most” part and gone to UGS and VCarve.

Hmm, this is real discouraging regarding Easel, here I was thinking there was some logical explanation but sounds like Easel is really for hobbyists rather than accuracy in cutting parts. I am doing prototyping in aluminum and cannot possibly even consider using Easel if this is how it performs.

I have inventor and Fusion 360 but was in a hurry and looks like a bit of a learning curve to use Fusion. Looks like I will have no other choice as I do not know if Vcarve would really be the best to use for cutting 3d Aluminum parts…

I trusted Easel for a long time, but in the past month I’ve had a number of projects ruined because of this. I simply assumed they were working on the tool, switched to VCarve for pretty much everything and haven’t really looked back…

@KurtBartels
Why does your part have a inside and outside lines along the perimeter?

Jeremy, this is what would make sense in the difference, as I said above I was hoping for a logical explanation. But it also has to do with my second question so if I am doing it wrong maybe someone can direct me.

I am attempting to create a drawing that will be cause the piece to be parted out from the 12x24 plate aluminum. I am not creating 2 lines in my drawing The perimeter of the drawing is one thick line. I have the setting on Inside Cut so what you see is the way Easel interprets it. The reason I am drawing one thick line is because I am using a 1/8 bit to cut the piece out of the plate and when I use a thin line Easel will not accept the 1/8 bit size, it says it cannot cut the perimeter because the bit is too big for the thin line. I tried different settings but it makes no difference even if I have it on Fill cut setting.

Imagine the perimeter line is as thin as the rest of the other lines, what setting would you use with 1/8 bit to part this piece out of the plate?

Is the problem that I am trying to get the machine to do too many operations in one session? Should I bee doing only the inside of the part and then run a separate cut for the perimeter of the part? I hope this is not the case.

I think Easel is doing what you are telling it to do, the problem is that you’re not telling it to do what you need. You don’t need to draw a line the bit size width to cut out the piece. You just need a border, and then cut outside the border. If you select “ouside” on your drawing, you will see that there are actually two cut paths one inside the border you have drawn, and one outside.

Also in the sandbox project, the border wasn’t set to cut all the way through.

It might help your understanding if you start a new project, draw a rectangle to you’re required size, and then play with the different settings, inside, outside to get a feel for how they work.

Thanks Andy and Corey for the confirmation. I think I understand now. I cant cut this all in one single operation. If the entire drawing is set to Outside Cut the the diameter of the holes on the inner design would change and be too large, whereas if it is set to Inside Cut it changes the border diameter and it becomes smaller, So it would need to be cut in 2 separate operations.

Is this correct? This is a mechanical drawing and the tolerances must be exact.

You can set inside/ouside for each element individually

Ah… of course you guys are right… I feel like I’ve been noobified. Thanks I will redraw and reset

Phil, nice site, I know we cut the depth by manual input but looking at your signs I see your sign adverts in various shades of gray to black. Is Easel also depth specific based on shading or is that just for your reference?

Ok, someone take a look at this easel project and tell me what I did wrong. Very basic set of pockets.

All of the circle pockets were ~2mm smaller than my design, and although the bottom 3 pockets are evenly spaced, I wound up with a significant difference in spacing on the finished product… as much as .3 inches between the right 2. The bottom pockets were also smaller than the 66 x 91mm, again by ~ 2mm.

I’d share a photo of the bad piece, but we had a bonfire recently and this was one of the first to be sacrificed.

I broke apart the design and here is the result, not what I was expecting. Why is the Outside cut coming out like this?

Here is the the thin line version 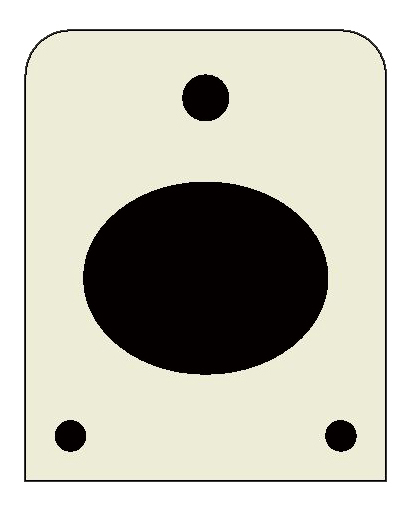 This is set to Cut Outline So is Easel saying the blue line is the actual object and it is cutting on both sides? That is the way it appears otherwise why is it showing a thick black line around the object? 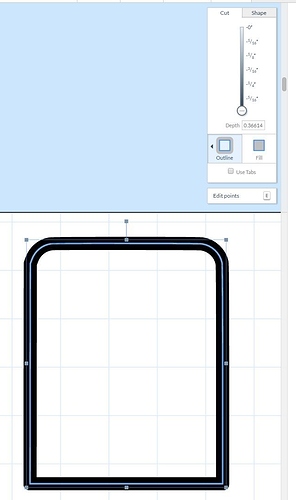 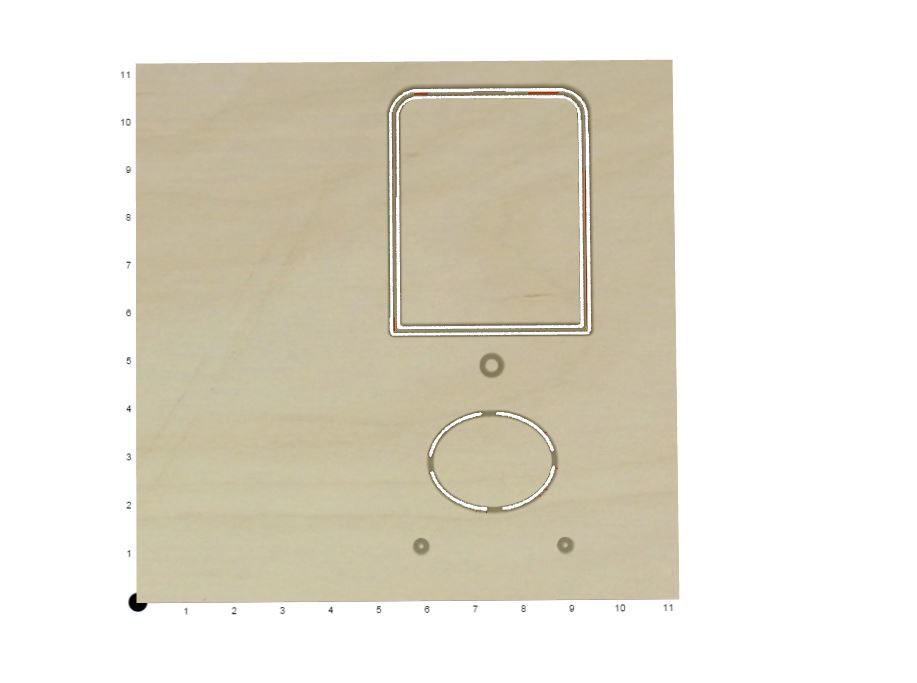 OK still filling the learning curve, my bad so it need to be a solid black object correct? 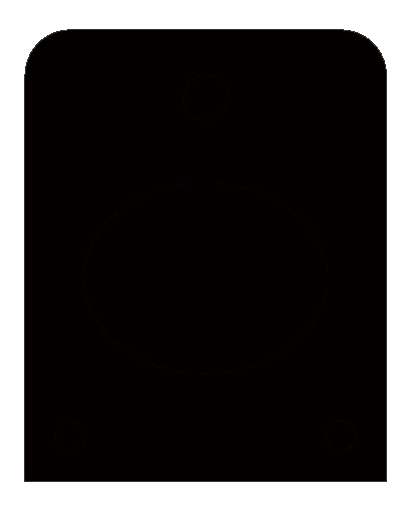 I see what you mean Phil, thanks for that I will give inkscape a try. 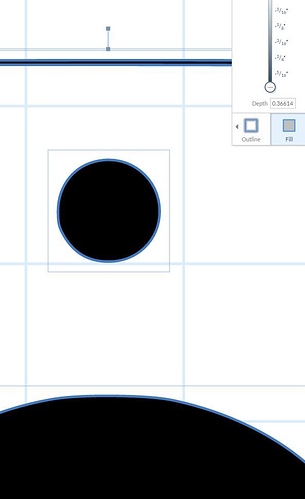 I did not calibrate steps per MM only because I’d had other cuts using gcode that VCarve spit out and they were dead on ( +/- .002), so I didn’t think it needed calibration.

The fact that the gap between the bottom pockets (right most 2) was so large in comparison to the left two, made me think easel had an issue.

I created the same design in VCarve, and cut again with UGS and everything was nearly perfect (except for 1 error I made), so I chocked it up to easel. I’ve had others that I didn’t save that were the same, off using easel and fine with UGS and gcode from VC8.

I’ll check steps per mm when I get home.

I just took a quick look at your linked Easel project and noticed that the lower 3 squares are not perfectly aligned in terms of the Y-axis position. The mid point of the first square is at Y = 55.1 mm. The second one is at Y = 56.4 mm. The third one is at Y = 55.5 mm. So there is a total Y delta of 1.3 mm between the three squares.

I also noticed slight Y-position variances between the circles (I assume they are supposed to be perfectly aligned and evenly spaced).

Having said that, I found that in Easel you have to be extremely careful when clicking on your shapes so that you don’t inadvertently move them out of position. It happens to me all the time when clicking on them with my mouse.

To avoid shifting them I no longer click on my shapes with my mouse, but instead use the button next to my mouse pad on my laptop. It’s quite an annoyance, but it ensures my shapes stay where I designed them to be.

Does anybody else have this issue?

…
Does anybody else have this issue?

Yes. But I keep my finger over Ctrl-Z when using Easel.