Cutting into acrylic or plexiglass

im doing the stormtrooper project and i notice when i use easel it says my bit is to big to do. i used a tapered ball nose bit and it just melts the plastic away

Due to the way I made that shape there are some tight spots that only very small endmills can get into. My endmill was to big as well and I just expected some of those tight spots to be a bit rounder than straight.

What type of acrylic are you using? If its from home depot or some place like that then Im not surprised its melting. The one in the photos was done in acrylic from home depot but I had to take extra steps to use that acrylic.

What is the rpm of the router? If you have it spinning to fast it will create a lot of heat. Spin it slower than you think and you should get some nice chips.

What exact bit are you using? I have never used a tapered bit before bit I dont think its to much of an issue unless it cuts the acrylic differently then a regular endmill does.

Depth of cut is also a factor here. The more passes you take the more heat is created. When I made this it only took one pass and then was done because you dont need to go very deep in order to get the proper look.

ok i can understand now i had the router up pretty high and it was cutting at a decent rate. any recommendations on cutting speed i put the exact bit in that you have and i did another trooper and it turned out great i have 1/4 in acrylic and i did 2 passes. so what you said kind of explains a lot to me. i picked the acrylic at a local window shop. was a decent price. now i have some other things to buy to make this thing work cool like that in the pic 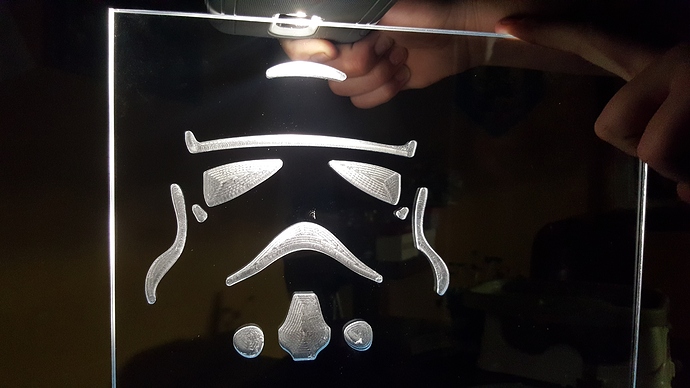 That looks really good. Without knowing the acrylic its hard to give any recommendations but I find that for cuts like this that are only a few passes its less of an issue, If you use the standard settings in easel then you will be fine but it could probably cut faster depending on your setup. Honestly trial and error has been the best for me when cutting things like this, its annoying at first but eventually you get a system that works for you.

Thanks. Trial and error is the best way but it’s also the most expensive and rewarding way to do things. They say if your not failing at some point your not challenging yourself enough

Ok a lot of this will depend on the specs of your acrylic. The way I did it was to cut a relief into the base the length and depth of the led strip. It was a tight fit so a bit of super glue was all I used. I then found a much thinner piece of wood and cut a hole all the way through it the width and length of the piece of the acrylic. this top piece of wood covers the fact that the relief needed for the led was bigger than the piece of acrylic and also acts as a way to hold the acrylic up. I never ended up gluing the two pieces together but thats what I would suggest doing. I also stained them just to look a bit nicer. I also drilled a hole all the way through the bottom piece and cut a notch in it so the wires would stick out the bottom but sit flat on the table.
As far as the electronics go, I used a blue 12v led strip and to power it I used a 3s lipo battery from a drone that way it was mobile. This was only because there was a specific use this piece was going to have and there wasnt any outlets to plug it into. My suggestion is if you want to plug it into a wall is to go on Amazon and by a strip of 12v leds and calculate the proper power supply needed to run each stip then buy one of those for every one you want to light up. You wont need an actual power supply just a cheap one will do, if you want they also sell kits so the leds will come with a power supply and they are like $12.
As far as cutting the relefe and the hole in the top plate, I did it by hand with a router and also by manually jogging the xcarve because I didnt care about the finish but to cut the relief in the bottom would only be making a rectangle in easel to the dimensions of the led strip you use and to cut the top plate would just be a rectangle the dimensions of your acrylic. 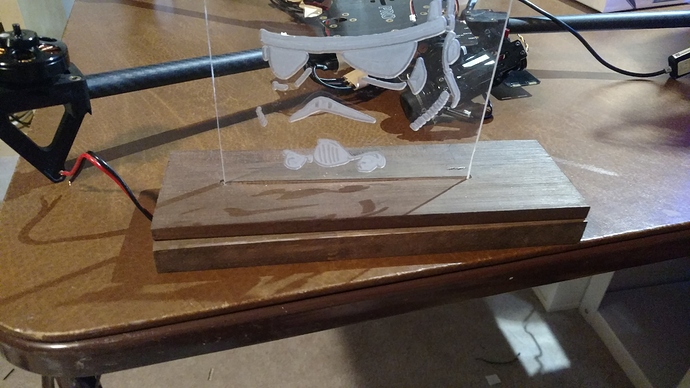 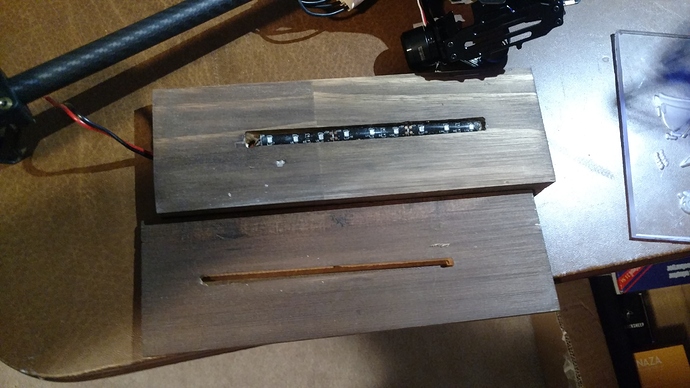