Developed a line cut on outside edge of tabbed thru cuts. This is showing on both top and bottom of cut on the outside edge when bit goes up and down for tabs. Also have a slight offset cut when bit changes depth of cut as seen on lower center of circle pockets.
Any ideas as to what I might check? Have already checked wheels and belts. 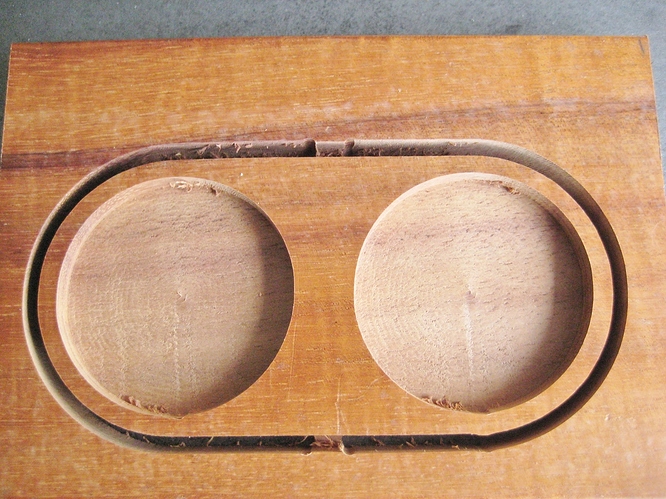 Yes, I did notice that it did not reverse on the tab cut anymore, that’s good. I’ll go thru the entire machine tomorrow and see if I find anything wrong.

I always see a little bit of this because of deflection of the bit during motion. Reducing the speed should reduce that deflection, and also making sure the z carriage is very snug with the eccentric nuts.

Thanks Paul. I was pushing it a little hard for this cut @ 100 ipm and .125 dc bit. I’ll check the Z wheels/nuts and test cut with less aggressive cut.

P.S. I’m going to rename the thread title to be more descriptive for posterity.

I’ve noticed this on my tabs lately, also. It coincided with a new bit set. It blamed it on that. Now I’m wondering…

@paulkaplan - What was the original thread title?

There are lots of possible causes for deflection, I’m wondering if anyone has done any systematic investigation. It is going to depend on the stick-out length of the bit, the collet you are using, the spindle mount, and the z-axis. And of course the toolpaths as well.

is there a difference between the thread of inventable ACME and this after-market linear rai ?
i dont know ACME normalisation (if there is one…)

i’m realy interessed too, but im afraid having to make heavy modifications or programmation

is this upgrade plug&play ?

I installed one of these ebay z axis units on my xc1000 and the rigidity improves substantially.
The acme screw, while identical in thread and pitch still reqiured recalibration but it was nothing too extreme. The need to do so may be a result of my having mounted the z stepper on top of the new linear axis and not using the belt and pulley setup as origonally designed.
I found it overall to be a much smoother and quieter operatiing machine when running the same material (tamarac wood) as before.

Same here. I also switched to open rail and a 40x40 extrusion and switched my vwheels over to axles instead of screws. Now, I think it is as good as can be.