Sister in law challenged me to create a tree of life in the spirit of Disney’s animal kingdom.

Several iterations later I think it came out pretty good…

Stained maple plywood, covered with Oramask 813 film and depth cut with a downdraft cutter. Painted with metallic brown rustoleam and peeled away the mask to leave only the carved areas painted. 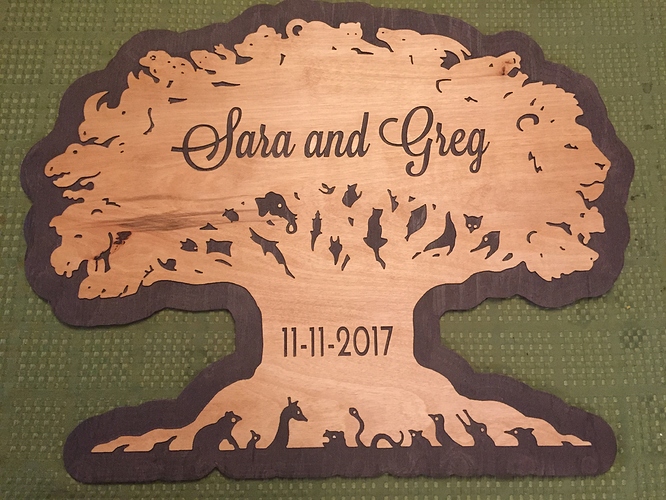 That is amazing.How did you end up creating your file to create your image of the tree to cut?

yeah if you designed that, than I have to tip my hat.

If not, well still a very good job!

is that an inlay or a profile cut glued onto a backing sheet?

Wow! Thats impressive. For something as large as that looks I probably would have used Phil’s shellac method. I’m a tightwad though and don’t want to use that much oramask lol

In Disney’s animal kingdom there’s a b&w sillouhette tree logo they put on things like the garbage can. I used Inkscape to trace the photograph to vector and then manually cleaned up all the lines until the features looked right. The artwork was by far the most time consuming and difficult part of this.

It’s maple plywood - I used the oramask, then carved the pockets through the oramask and spray painted. Then peeled away the mask. Similar method.

It’s an inlay on maple plywood. The design is a takeoff of the silhouette logo from Disney’s animal kingdom. Getting the vectors right was a nightmare.

Would you be willing to share the art file?

LoL, I was thinking the same thing but hated to ask.

@DavidNewman thank you very much, you are a rock star! 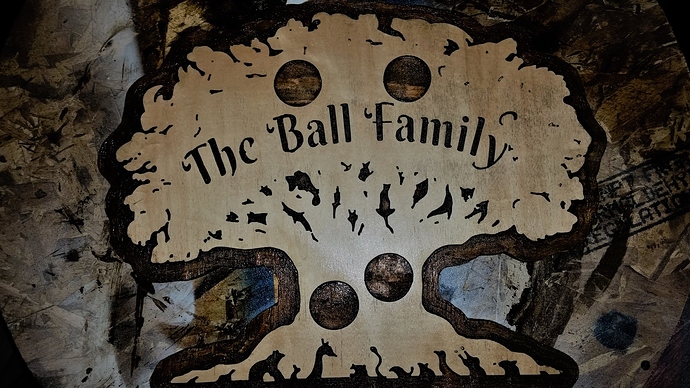 Made one for family members thanks for sharing your drawing . I added circle cutouts for them to display family photos. They loved it!!

Really looks awesome! Great idea with the family photos- glad to see others enjoying it!

very nice. how did you curve the text? I keep trying something similar in Easel with their app, no success so far

Create the text in inkscape and add the curve or style you want. This allows you to use many more font options as well. Convert text to paths and save as .SVG. Then you can import to Easel and use it in your design.

yup what David said I design just about all my stuff in Inkscape takes a bit to to learn but so worth it you have a lot more options its very good drawing/design program.