Do you ground cables with shielded armor to stepper motors?

Do you ground cables with shielded armor to stepper motors?
Can cables without shielding armor be used?

No. Never ground a shield on both ends or all you have is another conductor.

Ok, but should I use shielded cables?
Can i normal?

Shielded cables help with EMI, but most of these hobby machines use unshielded. If you use shielded cables, ground the shield at the controller side only.

And it is important to make sure that everything uses the same ground or you will get ground loops.

How to connect the screens and ground them to the ground with a stake? 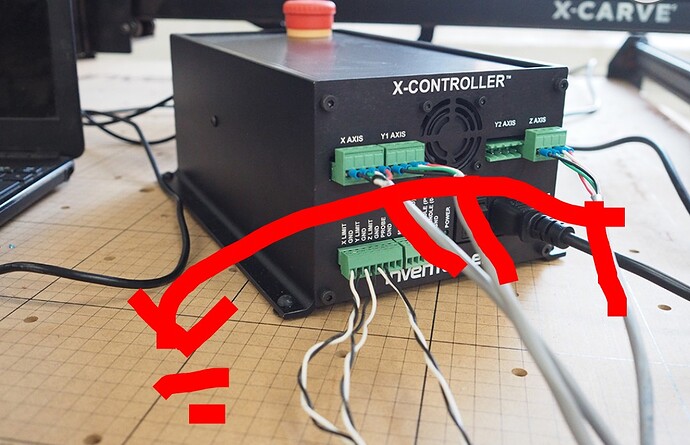 Ground loops are only a problem with audio gear.

Ground, is ground, is ground. All electrical devices are either grounded or Isolated via their housing. Neutral wires from the electrical grid are grounded. Shielding is to prevent wires from acting like antennae (EMI = Electromagnetic interference), they are always grounded on both ends. The real question is “Does X device need shielding?” and if so, “Why”? Some things just don’t benefit at all from having shielding, so if you have shielding that’s not not needed, then it makes no sense to ground either end. Foil shielded wire has an additional ground wire (no sub insulation), and should not be used as a lied for anything but ground, or not used at all. Shielding adds to the cost of cables, so unless you don’t have something more suitable for the job, it’s a waste of money.

Isn’t that what we want? To take and “drain” that externally induced interference. And I think an extra conductor in the cable would achieve the same… Not really a “shield”.

they are always grounded on both ends

Maybe ideally… But I’ve seen it in practice resolve EMI issues to ground at the controller side only. There are many sources that say the same, including LinuxCNC.

@BobEnglish1 Can you explain where you’re coming from?

Yeah, ground is not always ground when people talk about it. One must be very specific when talking about it. To be absolutely sure one must consider all grounds to be Earth and everything else to be a common for the associated power supply (let it deal with draining stray voltage whether it is truly Earthed or floating) unless you are talking about the Neutral in a 240V split-phase North American home electrical system which we are not right now. Isolated DC power supplies have a ground/common of their own, but are not technically grounded to Earth; they are floating with respect to Earth.

With the X-Carve one should connect the shield and/or ground in the control cables to one/several of the GND connections since you want any stray voltage to be drained to the ground/common of the controller’s power supply. One should NOT connect them to Earth.

In my power and controls experience I have only ever seen the end nearest to the power supply connected to ground/common for the ground/shield in control cables. I have never seen both ends connected.

Ground loops are only a problem with audio gear

Electrical engineering and wave/energy theory and the electromagnetic spectrum, so everything from electricity over light, radio, into the gamma ray range. It’s not a matter of “taking” it and draining it away. You can’t take RF out of the air, or reroute it… you can only be in it’s way and if you are, and if it effects your circuit, then shield against it. Hence the word “shielding”. If there’s a ground wire going to the motor from the controller, then there’s already a connection, so having another one would be redundant.

I mean noise is noise. When currents flow between ground potentials it’s real current, and real current flips bits… also the only difference between audio and other electrical transmission (like say Ethernet) is the frequency. While true that typica ground loop hum is way, way below the fluency of computer data transmission, constructive and destructive interference can certainly change signals on a wire.

I found a lot of this slower noise to be a problem when I had a PID controller on the dewalt in that the tachometer would sense these noise pulses inappropriately (since they were in the same general order of magnitude in frequency.

For example I would love to blame a ground loop for the mishmash of spelling in my previous post, but it’s just the vastly worse AI autocorrect in the latest iOS…

You can’t take RF out of the air, or reroute it…

Hmmm… Should we wake up Emil Lenz and tell him that his law can’t exist?

That is the entire reasoning behind a drain wire (ground) and/or shield inside control cables. You want that conductor to capture stray electromagnetic fields that might otherwise be captured by the control conductors and drain it to ground/common.

Also, if we could not capture RF then AC transformers would not work the way we know they do. After all, radio waves (electromagnetic radiation), electromagnetism, and electricity are actually the same thing.

I was speaking of draining it from the air, not draining the incidental penetration from a circuit! Dang, I was responding to a reply that sounded like they were trying to remove the EM emissions from the area the circuit is in, as in sucking it away from it’s point of origin.

Lenz’s law, states that the direction of the electric current which is induced in a conductor by a changing magnetic field is such that the magnetic field created by the induced current opposes the initial changing magnetic field, but as a qualitative law that specifies the direction of induced current, it states nothing about magnitude, nor it’s effect on any given circuit based on it’s function. You need to seriously think about the energy quantities we are speaking of here, as well as the difference between Em from the air, and from the line, where shielding won’t help but isolate wires from each other (cross talk), not the line it’s coming from. Line filtering and shielding are two different things, that somehow people see as one, and depending on the circuits and where therein, both may be needed.

Absolutely not. They are an issue with any grounding system with multiple connection points in a daisy chain that is subject to induced EMF and/or RFI. Grounding a stepper motor lead at one end turns the shielding into a resonant antenna. If it’s resonant at the frequency or harmonics thereof radiated by the stepper pulses it will conduct and form ground loops that re-resonate and affect TTL signals.

Are you agreeing with me or disagreeing?