Anyon else install these upside down or backwards? Seems like the instructions have less photos and diagrams the further you get along. I saw the non 1000mm have some videos… the chains/wiring is on eof the only parts i had to completely disassemble and redo.

Be sure to look at the nubs on connnectors y enlarging photos, just because you can run the chain back and forth in place doesn’t mean you have it oriented correctly.

I didn’t check, but it seemed like the chains were different, I had one installed and one end was mounted to the extrusion but the other end was upside down… I swapped them out and it was fine, it could just have been me needed sleep though…

My big confusion, is when installing the drag chain to the X Axis, it mentions mounting the upper part of the chain to the drag chain bracket on the Carriage, but never tells you what screws/etc to use. I was a bit over tired, but it seemed to me that the bracket is not threaded, so you would need lock nuts or something… again I was tired, but can someone clarify this for me?

Yeah - once I got to connecting the 2nd drag chain, I realized I had popped the end piece back on upside down. Like I said, I was tired. Still irritating that they don’t specify which screws and nuts to use to mount the drag chains to the brackets. the build instructions kind of get skimpy the further in you get.

It took me until just right now to zoom in on one of the pics, and figure out where and how to attach the attach the “drag chain bracket” to the aluminum extrusion frame using the small button head cap screw and post-assembly insertion nut.
Maybe my lighting isn’t great or something, but I just couldn’t see the bracket in the pic when I was working on it.

This is exactly where I’m stuck right now.

DISREGARD PIC REQUEST. Followed Jeff’s advice and just kept zooming and scrolling until i found the hidden bracket. (Any chance you could post a pic and show me where to mount the Drag chain bracket? I’m pulling out the little bit of hair I have left 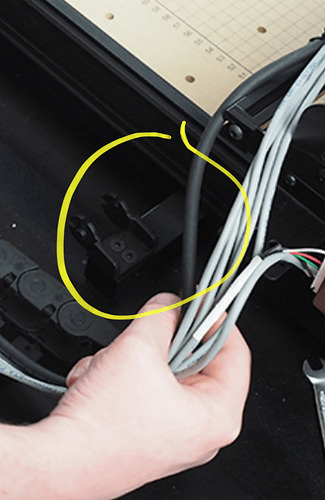 And yes… the instructions were AWESOME in the beginning but definitely start falling off toward the end of the build.

Did someone provide a definitive answer to this thread? Which screw and nut should we use to connect the top part of the drag chain? All of the screws and nuts are very specific so I don’t want to use random ones and have to redo parts of the assembly later. I’ve been able to muck through all of the instructions (like others have mentioned, very good until the end where the instructions become less descriptive) till now so browsing through the forum to see if I can find the answer I need.