So, I know I’ve seen this topic brought up before, but for the life of me I can’t turn up a solution if someone’s come up with one. I assembled my unit as it said in the instructions, and from the pictures, it would appear that I have used the correct drag chain ends in the correct places. However, the X-axis drag chain hangs down like a loose hose, and is perpetually snagging on stuff on the wasteboard.

Has anyone come up with a good mod to support that, so it stays up where it’s supposed to be? It’s not really a functional problem, just annoying as hell so far. This is a picture from right before my first cut (ah, back when the wasteboard was so pristine) but it shows the trouble just fine. 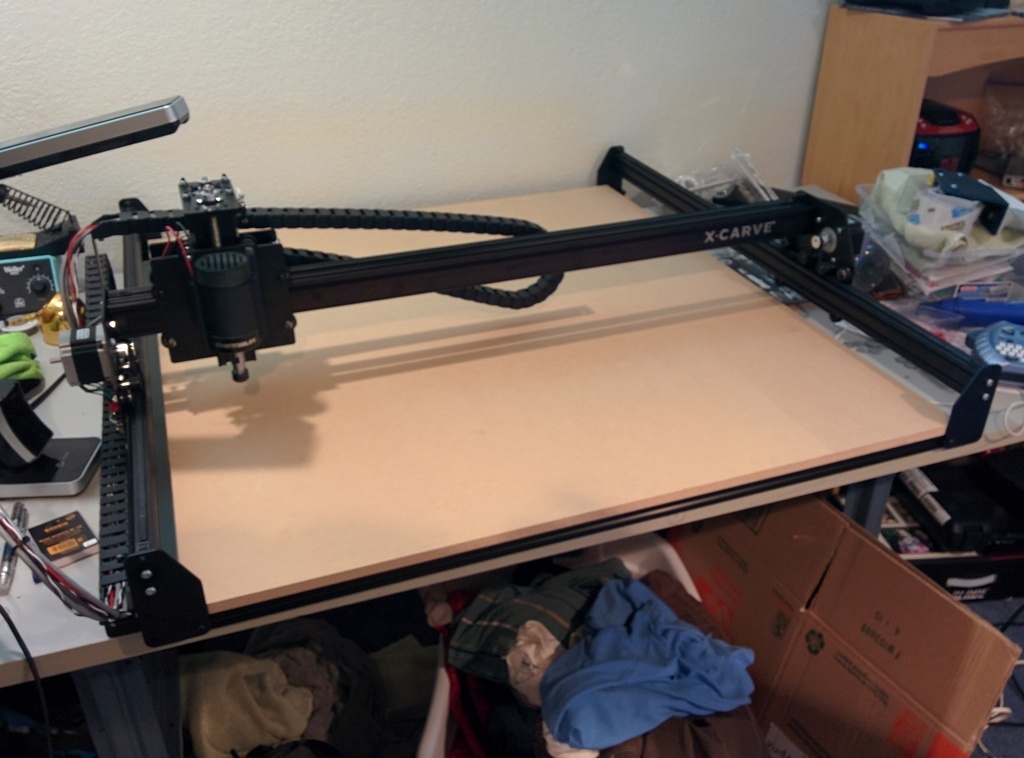 I remember seeing a picture of a support someone made but I can’t find It now. It was a length of bar that acted as a shelf for the chain to rest on.

There is this:
Continuing the discussion from Drag chain orientation:

i have the 1000mm version and my drag chain kept hitting my wasteboard… sooooooo i took a piece of 1" aluminum angle bar and made a support. its about 4-5in long and just mounts to the Z axis bracket for the drag chain. its abit thicker so i had to use different bolts that were longer but it gives it just enough support to stay well above the waste board.

I had that exact same problem. You’ve got your end connectors backwards. It means you’re going to have to disconnect the wires that go through it, but once you’ve done that, just pry off the two end caps, swap 'em around, put it back on, and you’re in business.

Ah, thanks for the input, guys. Hmm. I think I’ll be following Andrew’s plan, I really don’t feel like pulling apart my entire wiring setup. Damn, even used the ends as they came configured from Inventables.

@PeterJames do you have a picture of yours? i couldn’t figure out how to make mine not hit using what i got in the box.

fyi you will need some longer screws and nuts but thats pretty easy to come by. mine has worked perfectly since the mod. just some cheap 1" angle aluminum thats about 9-10 in long give or take. doesn’t really take too much.

Sounds like I need to make a hardware store run. That’s just kind of a poor design, I think. That bracket needs to be a bit longer to support the chain well enough.

You 100% don’t need any additional support or anything. You just have your bracket ends switched. Let me see if I can find before and after pictures, hang on…

Here, look at this thread, you can see I had the same droop that you do, and once I swapped the brackets, it looks like the picture that TonyNo posted just after my post:

@JeffTalbot Here are some pics. I expect that I have one of the drag chain brackets on incorrectly or something. The interesting thing is if I support just one of the vertebrae coming off from the bottom connection point, then the entire chain will lift up. At this point it's probably easier for me to retrofit a support in there, rather than re-do my wiring. Full chain: (there's about 1.5" of material on my wasteboard, I think when it's just the wasteboard the chain sits maybe 1/2" above it…

Yeah, but to correct the error from Inventables, I do not want to disassemble the whole wiring harness through the X-axis drag chain. It would seem much more practical to just have enough support to hold up the chain, to my thought anyway. I’m mostly just annoyed that it’s a problem at all, particularly coming on the heels of having to replace my spindle for a dying bearing. I’ll probably just cram something under it to properly support that drag chain, and call it good enough.

Please, guys, if you’re going to give your directions by which ends are connected to the drag chain and which ones are loose, connect the right ends to the chain!

Yeah, I put off fixing mine for a while, but it really only took me about ten minutes to flip everything. I tagged my wires with some tape, disconnected them from the terminal blocks, taped the whole thing into one bundle, then slid the chain off and back on. Then just untape/reconnect and I was back in business.

Hope you find a solution that works for you

yeah i wasn’t taking mine apart. so mine is “good enough” when i upgrade my spindle to the Makita i’ll revisit it … maybe.

Yeah, probably the same route I’ll take. If I end up pulling it for some other reason, I’ll likely swap them around. But I don’t really feel like pulling it apart for that reason only.

yeah. i suppose the instructions where alittle off but its not a HUGE issue when it can be easily remedied

Eh, it’s a minor issue that can be ignored mostly. It’s not really particularly easy to fix, given that you have to pull apart one of the more annoying portions of the assembly process and re-do it to fix the problem. The limit switches would be the really obnoxious part, since they’re a continuous, soldered-on wire from the X and Z limit switches to the G-shield, running through the other drag chain as well. I’d have to cut and re-solder those wires, or un-solder them from the switch.

I’m mostly just annoyed, but it’s really a minor thing. Overall, the instructions are very good. I just think the design in that particular spot is a bit shaky. That bracket could really do with a slight re-design to add an inch or so of support to the bottom of the drag chain, taking the stress off of that end connector entirely and rendering the whole point moot.

agreed. but at least for now you have a known working solution.

Yepyep, and this kind of thing is just part of “build it yourself” type hardware in general. I picked up a piece of 1" aluminum 1/16th thick angle last night, so I’ll likely be building a little brace for it this weekend. In the meantime, I’m just keeping that side of the wasteboard totally clear so there’s nothing for it to snag on.

From the pics of the X-carve in the home page, your drag chain is mounted 90 degrees off.

That picture has confused a lot of people. The drag chain used to be mounted horizontally, but for some reason they changed it to a vertical configuration before they sent out the kits. No idea why, it makes more sense horizontal, I’d think…