I’m trying to use the X-carve to drill a series of holes but even on 1 the spindle is so fast on the Dewalt 611 the holes are charring/smoking and it makes a squeaking sound on the retraction.

The reason for using the X-Carve instead of just a drill is I need to make a lot of these and the precision of the X-carve would make it alot easier down the line.

I’ve figured out the tooling etc in Fusion 360 with a drilling operation with Rapid out but even if I update the plunge feedrate in F360 when making the CAM it doesn’t seem to increase the speed in real life. I wondered if there was some sort of limit to the Z-axis speed that’s over-riding the F360 gcode?

Anyone else struggled with this in the past?
Cheers

Look for a peck drilling option. That might help.

Cheers for the advice everyone, it was obviously going to be user error

I’ll try some of these solutions tonight.

It’s a 2 flute, 3mm drill bit - not one of the cnc router bits I purchased along with the x-carve. I was just dubious about the ones I got with the X-carve as the tip angle was either flat or very shallow. Cheers for the advice, I’ll that a go tonight.

I wondered if there was some sort of limit to the Z-axis speed that’s over-riding the F360 gcode?

I would believe the speed setting for X/Y/Z defined in GRBL will be enforced regardless of set speed in F360.

I’ve just got the latest X-Carve, which I thought had the acme rod? So should that be able to handle a faster speed?

Is updating the GRBL to a faster plunge an easy enough task or should I not edit things I know little about?

Ah ok cheers. I’ve downloaded the GRBL - already got the correct Arduino installed - I’ve looked into the config.h file but I couldn’t see any reference to where to change settings or any reference of the $112. I actually did a search all files in Sublime for $112 but came up blank. Any hints where I’m going wrong?

Thanks all for the advice everyone, I managed to update the GRBL with the great help of Phil’s tutorial video. I bumped it up to 1500mm and seemed to work perfectly. There was still the odd bit of screeching on the chip breaking retracts but it didn’t char this time. I also used a single flute upcut bit — I actually managed to break the original offending drill bit trying to align a bump stop for the process haha. I thought I’d just share the before and after to show the problem better just for record. (ignore the adaptive clearing on the first one, I was just experimenting).

I feel like my first use of the machine should have been something more imaginative than just repetitive pilot holes for it’s own enclosure but hey-ho. 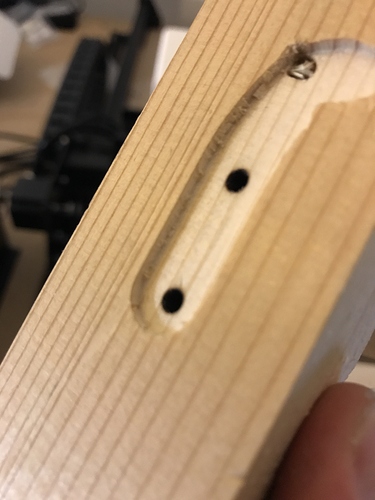 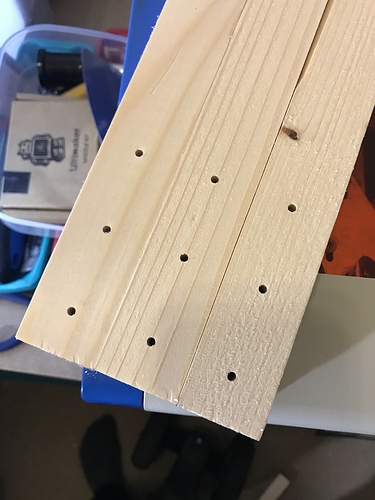 Guess I was wrong about the Z speed. Maybe I should give it another go…or just implement my linear Z.

I still think it could do with going faster, or at least accelerating faster but I think the linear Z might be needed to push it that far. I don’t think I would plunge this fast for any other operations where I could spiral in or plunge from the side, just drilling where the bit has contact on all sides simultaneously to help stop charring and maybe that squeaking from the wood.