Dropped Makerslide and broke off tap in the hole

I was tapping the holes in the ends of the Makerslide and
while I was backing the tap out of one of the holes I stepped away to
grab a paper towel, the Makerslide fell over and the tap broke off in
the hole. So the tap isn’t especially stuck in the hole, I just don’t
have anything to back it out with. I have a screw extractor kit, but
because the broken off end isn’t even I can’t drill the hole for the
extractor to grab. So I stopped before I do any more damage while I
consult the experts. Any ideas? 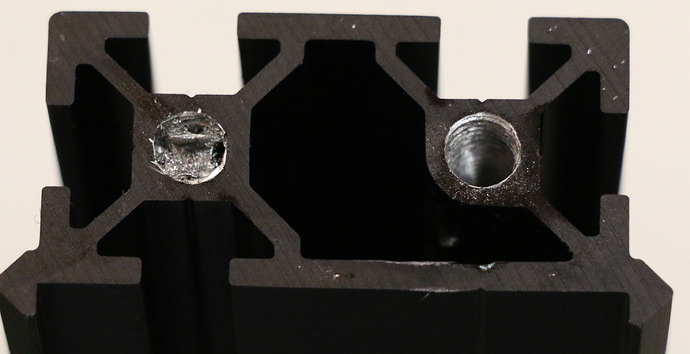 If the tap isn’t too tight then a couple of pieces of stiff wire (piano wire) inserted down the flutes of the tap may give you enough to grip it and turn it out.
Failing that, a soultion of alum (potassium aluminum sulfate) will dissolve the tap - eventually.

@StevePrior Ugh. Happens all the time here in aluminum boat world. There is a tool with prongs that will chuck up into the tap handle that fits down into the chip channels to gingerly back that puppy out.

Sounds promising, what are those things called and where can I get one? There are some boat places around.

Just ordered the #10 size Walton Tap Extractor from McMaster Carr, hopefully I’ll be back in business tomorrow. Thanks for the tip.

The Walton Tap Extractor got delivered and an hour later the tap was out and I was back in business with no thread damage. Your suggestion really saved the day, thanks!

I could have gone with Amazon and gotten 2 day delivery, but I went with a more local industrial supplier (McMaster Carr) and the extractor was $5 less than Amazon, and with $5 for ground shipping I got it the next day, so one day quicker. The tool cost $20 on Amazon and $15 on McMaster Carr.

I had one of the self threading screws snap off on the Makerslide…not sure which of us had it worse!

You had it worse. There was a tool I could buy to easily and safely extract the broken off tap. All I had to do is not panic and make things worse until the tool arrived.

I ended up cutting a section around the screw out using a dremel. I bought a tap set and then threaded the hole and used a longer screw.

Fortunately I was able to cut the screw out without actually shortening the makerslide. Definitely made up some creative new swear words, however!

Not even close, you had it MUCH worse.