Am I using the dust boot incorrectly? It has been spit out, beat up and generally abused by almost every project I run. If I don’t wrap the boot to the spindle with tape it will always come off at some point during a cut, even without any sort of clamp interference.

The magnets seem to do nothing, adjusting the boot is a colossal pain, esp. mid cut, it throws off zero constantly during multi-part cuts.

I have stopped using the dust control period if I have to leave the room for more than 5 minutes as I have come back to ruined projects were the boot has gotten caught in the gantry/spindle/etc. and all hell has broken loose.

This is probably my biggest gripe when it comes to the machine. I have gone through so many dust brushes and clear plastic inserts. I truly can’t think of what I am doing wrong. I avoid any type of interference at all costs, but literally a pass with the bristles barely skimming the material will cause it to fall off.

Could you take a picture of your dust shoe on your machine and post it?
The magnets don’t work for me either, I slide the right side on first and then snap the left side over the bracket that holds the dust shoe.

That really sounds weird.
I don’t know what type of dust shoe you have, but I have the suckit and it works great.
One thing I did though, is to take out the thin center insert so the router can easily pass through the shoe.
The center piece is not needed because the DW611 has a fan that blows downward.
Could this be your problem?
Is the router hitting the shoe and causing your problem?

I have the normal dust shoe that comes with the kit. The router only hits the shoe when the shoe comes loose. I did not know that about the center piece. I have a screw missing anyway. 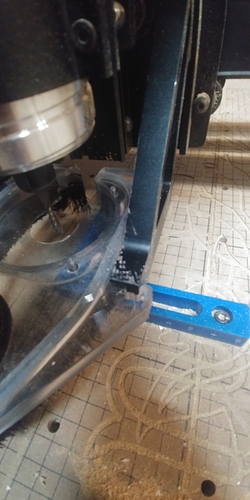 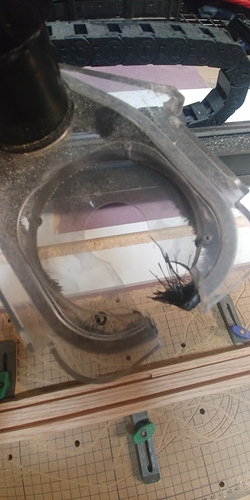 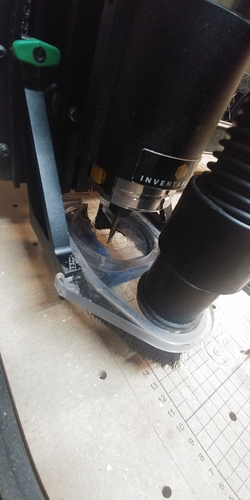 Is it your hose pulling the dust shoe out/loose? Maybe post better pics of your setup.

Is the polarity of the magnets correct?

i had a similar problem for a while. What my issue was was that the pole that the hose attaches to was bumping into something overhead and was restricting the movement and not allowing the natural rotation of the hose. This was causing just enough pressure to pull the boot out of the mounting brackets.

The other possible issue is that the boot could be running into the hold down clamps pulling the boot off. Check the path of the machine to make sure that is not happening.

I hope this is helpful

Same boat as you. I hated the factory dust collection option. The plastic insert broke the first time I used it so I never replaced that. My brushes come out of the slot in the base plate constantly. I have to keep it raised off the work surface or it pushes up against my Z axis messing up my cuts, and I had to reset my home switch positions because it kept bashing into the y axis plates after each carve. Its not a good design.

I recently changed to a pwncnc and there is NO comparison.

Brother…I hate the original dust boot. Just wasted 3 hours on a carve and it came loose a gain and hit a clamp. I AM DONE WITH THIS SHIT. Tell me about the PWNCNC boot? You cant buy the SUCKIT one anymore. Do you have pics 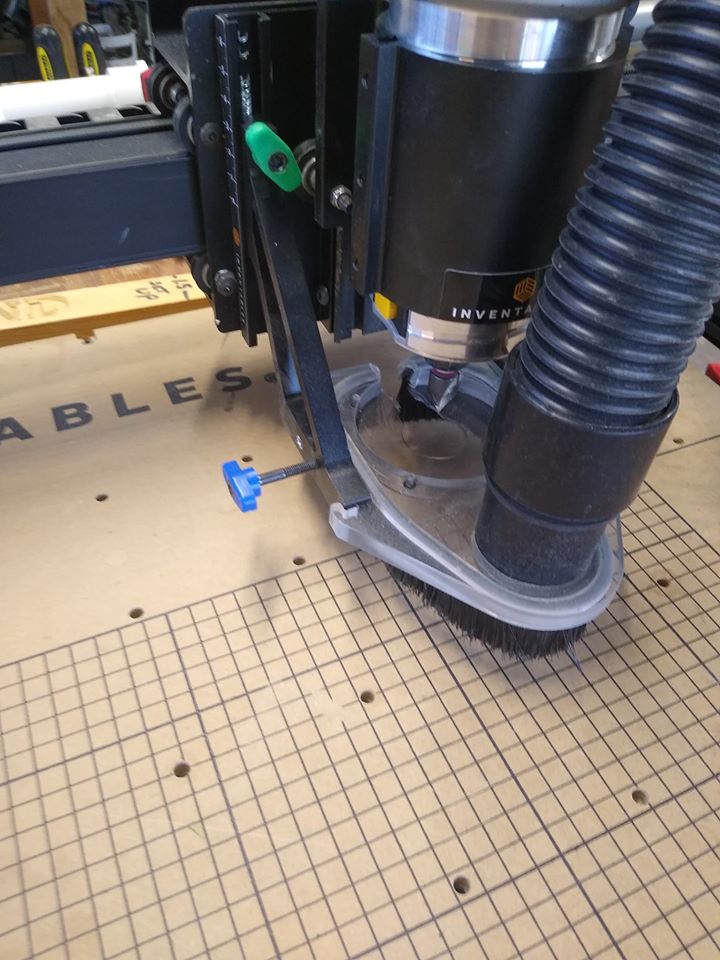 For me the magnets fell off almost right away, and I had the same problem. Using a large enough rubber band did the trick. Wrap it behind both of the black arms and around the front of the acrylic shoe. I haven’t had a problem with it ever again.

I had a similar problem, I found my vacuum hose was pulling the dust collector off. I fixed the hose above the CNC a somewhat finicky adjustment, that was better but anytime the shoe came in any sort of contact with the clamps it popped loose. I abandoned the clamps for the most part and won’t to double stick tape. The whole thing has been a learning experience, frustrating at times but rewarding too, and there are a great bunch of folks on the forum willing to pitch in. I learn as much as I can from the mistakes of others I don’t have time to make the all myself.

I meant to say I went to double stick tape. Fat fingers…

Just make your own. Made my own, much better than that plastic crap.