I see some great designs on here for dust shoes and I want to build one SOON because I am doing a lot of carving right now. However, I can’t decide if I should go with a X-Carriage-mounted or Z-axis mounted version. Both would be adjustable but I’m trying to determine the advantages and disadvantages to both. I could see if you are cutting a lot of pockets where you would want the shoe to follow the Z-axis movement.

I have built both and both have there have there advantages and disadvantages to both. Mine currently is mounted to the Z axis and it is working great. I think there are so many things that go into it that you have to do the research and build what you think will work the best for you and then go from there. Personally I built three different dust shoes before I got one I really liked and am happy with.

I’m still trying to figure out which shoe would be best for me. I don’t start with large sheets of material, so clamping devices will always be something to worry about.

The think with Z axis mounted ones is that just looking at them, there is a lot hanging out in front of the router. So more weight of the shoe itself, plus any from the weight of the hose etc. This adds more forces to the Z-Axis wheels, as well more twisting motion on the X carriage itself, weight in front of the axis, further from the pivot point. This will then increase any need to do a X axis stiffening mod.

For what I’m doing, shorter 20 minute cuts using a 1/4 bit, I have a piece of rag duct taped around the router to stop the bits from flying up into the belts/wheels, and hovering every 5 minutes or so. Very ghetto, but it works until I see something that I like. When I do finally make one, it will probably be an X mounted one, designed to get about 75% or more of the dust, but most importantly, to keep it down on the waste board, and not up in the belts/pulleys.

I use and updated version of this, works like a charm: 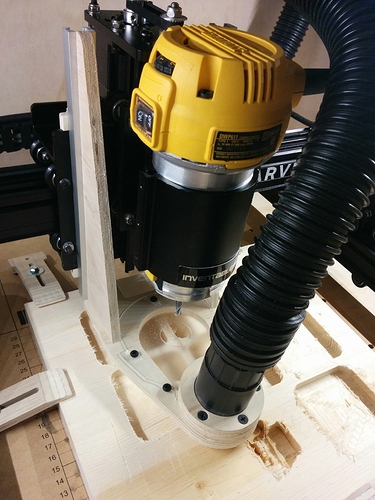 hink with Z axis mounted ones is that just looking at them, there is a lot hanging out in front of the router. So more weight of the shoe itself, plus any from the weight of the hose etc. This adds more forces to the Z-Axis wheels, as well more twisting motion on the X carriage itself, weight in front of the axis, further from the pivot point. This will then increase any need to do a X axis stiffening mod.

For what I’m doing, shorter 20 minute cuts using a 1/4 bit, I have a piece of rag duct taped around the router to stop the bits from f

Well, I made something from painters tape and a disposable plastic cup, and used that for the first 4 or 5 cuts I did, which were trying to make a better dust shoe.
The one I have now is based on the files that @AlanDavis posted awhile back, and it works pretty well.
Really keeps the dust off the belts, pulleys and electronics.

I used the brush strip from McMaster-Carr (there’s a link in one of those posts), and it works really well.
I (accidentally) ended up making the grrove for the brush wider than it should have been, so when I hot-glued the brush into the groove, I ended up with the brush not pointing straight down, but angled out about 30 degrees.
This accident worked out really well, I haven’t had any problems that I could tell due to pressure from compressing the brush on the z-axis.

I’m using a production one from KentCNC, and it has been working fairly well. The brush strip causes slight problems with flex on the bottom of pockets when the axies reverse, although the later version of the ring they sent me with softer bristles is much better about that than the early model. I think when I get around to tearing it down for upgrades, I’m going to try a fixed shoe design, just for chuckles.

I think I finally have a design that works for me. I really wanted to attach the hose behind the X carriage. Hope to finish today to see if it will work! 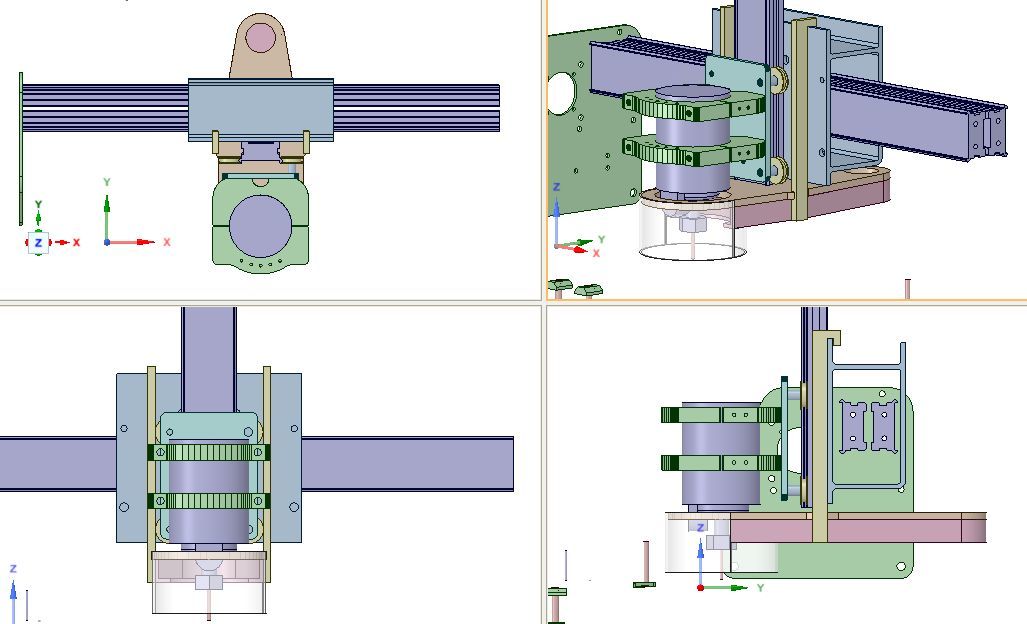 I got 2 different models 3d printed. I’ve been using the “original” Makita dust show with great success. Biggest complaint is you have to take it off to change the bit which is a huge pain - especially if you need to change in the middle of a job. I have not tried the fixed version yet, but that would “fix” the bit change issue (no pun intended).

If the dust shoe is mounted to the x-carriage rather then the z-carriage, then the bit can be changed without removing the shoe. Just raise the spindle and change away. The gap between the shoe and the spindle doesn’t seem to reduce the vacuum much.

My latest dust shoe is similar to @JeffParish 's. It's working really well. So nice to be able to walk away from a job for an hour without concern that the kerf will fill up with chips. Things I like about this shoe - can change the bit without removing the shoe - shoe height above stock is easily adjustable, without tools - keeps the kerf very clean - bit is always visible - shoe is easy to remove, without tools - shoe is compact and low mass - inlet port has a cool looking vortex generator :…

Hey @TonyNo I like the hose attachment on the other side of the X-Axis also. Let us know how it works and post some plans if you are happy with it please.

@TonyNo i think you will loose a lot of clearance having the hose on the back of the carriage. Unless you never want to cut anything thicker than 2"

If that ever happens, I’ll make a new one!

I scrapped my idea until I can come up with a better mounting scheme. Until then, spindle mount it is! The plan was 1/2" MDF, but I have so much 3/4" around… 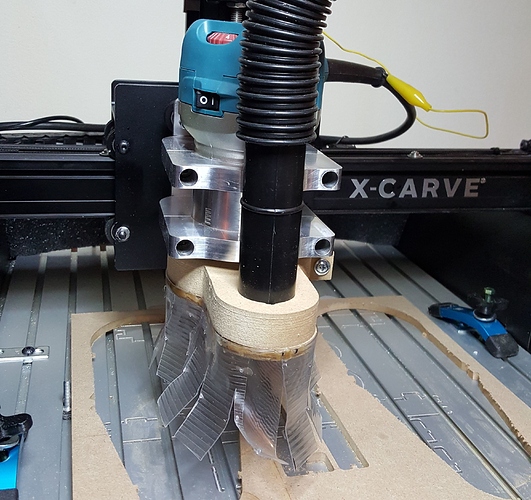 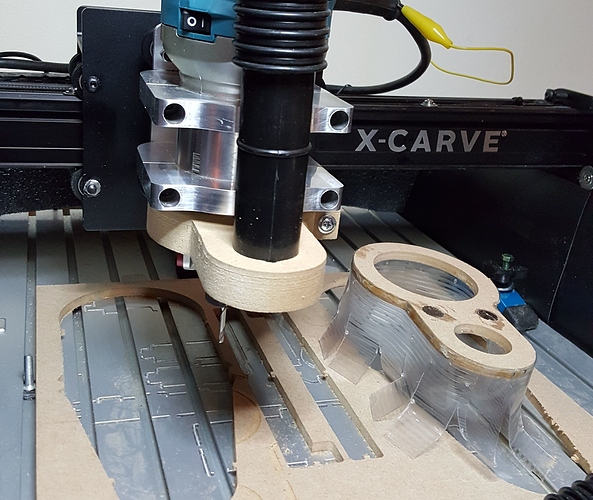