I am getting ready to install a Super Pid controller onto my Xcarve. In the meantime I have been playing around with some Gcode settings re-familiarizing myself with them. In doing so, I stumbled across an interesting tidbit of information. I do not know how this actually affects the 611. This may be a terrible thing to do. I am not an electrical engineer, but I am hoping some of you who do know the physics behind this will chime in.

I recently upgraded to the CNC4NEWBIE X-Carve Slide. It is a substantial upgrade from the stock Z.
With the anticipation of the upgrade, I started hacking the 611. I originally installed a router speed controller ($20 Harbor Freight) so that I could control the spindle speed from the control box instead of on the machine. This gave me the opportunity to adjust the spindle speed on the fly which was really nice to have and I did not have to worry about trying to do it on a moving machine. By doing this, I had to bypass the internal speed controller, Matter of fact, I removed it all together and wired the 611 to be always on without a built in power switch. Granted in removing the internal components, I lost the functionality of the LED lights, I will work on those later. By removing the Internal controls on the 611 the new Router speed control works great. In addition I gained more space under the hood, So a Probe input was installed below the previous speed control knob and above the previous power switch. The Rpm sensor was installed in the location that previously housed the Power Switch.

But here is what I found today while playing with Gcode. Because of removing the Internal speed controls within the 611 and Hardwiring the Spindle to the SSR25DA that is connected to the spindle control on the earlier power supply with Logic card, I can control the spindle speed with a M3 and S command.

Now keep in mind I have only cut air with this technique and have not attempted to cut anything with it at this time. I also do not know if this will have any adverse affects on the spindle.

I will say this much though. The spindle is a lot smoother at lower RPMs and runs slower with the harbor freight router control than with the above description. I just thought this was interesting so I thought I would share. Some of you may be Leary of taking a 611 apart, but the spindle speed control on the fly is a nice feature to have. I tend to adjust the speed while the tool is cutting and gauge the spindle speed by the sound of the cut instead of a defined set speed. 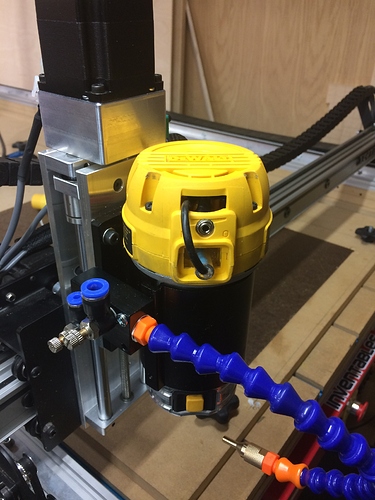 Will be making a new zero plate soon. This was just a piece of scrap that I had around. 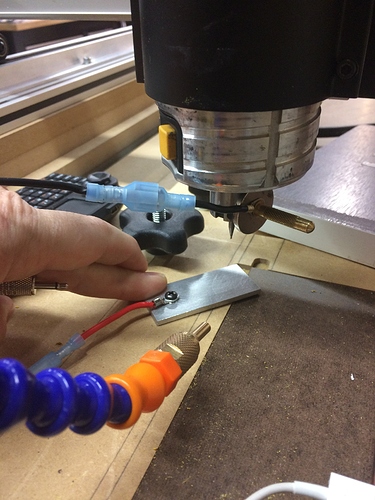 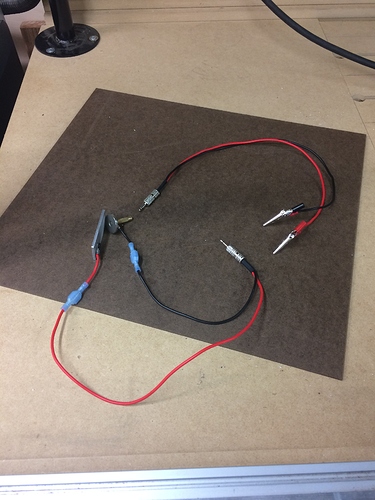 Matter of fact, I removed it all together and wired the 611 to be always on without a built in power switch.

This has the effect of bypassing everything and now you just have a motor without any control other than on/off. By adding the Harbor Freight “speed controller” you are merely changing the control to a PWM modulation of the motor without any regards to varying spindle speed by the load place on the router motor.

Watch your low end spindle speed. The DeWalt is designed to have the fan removing heat at a certain rate. If the RPM of the fan is too low the motor burns out.

I think that the SuperPID folks recommend a minimum RPM of 8000.